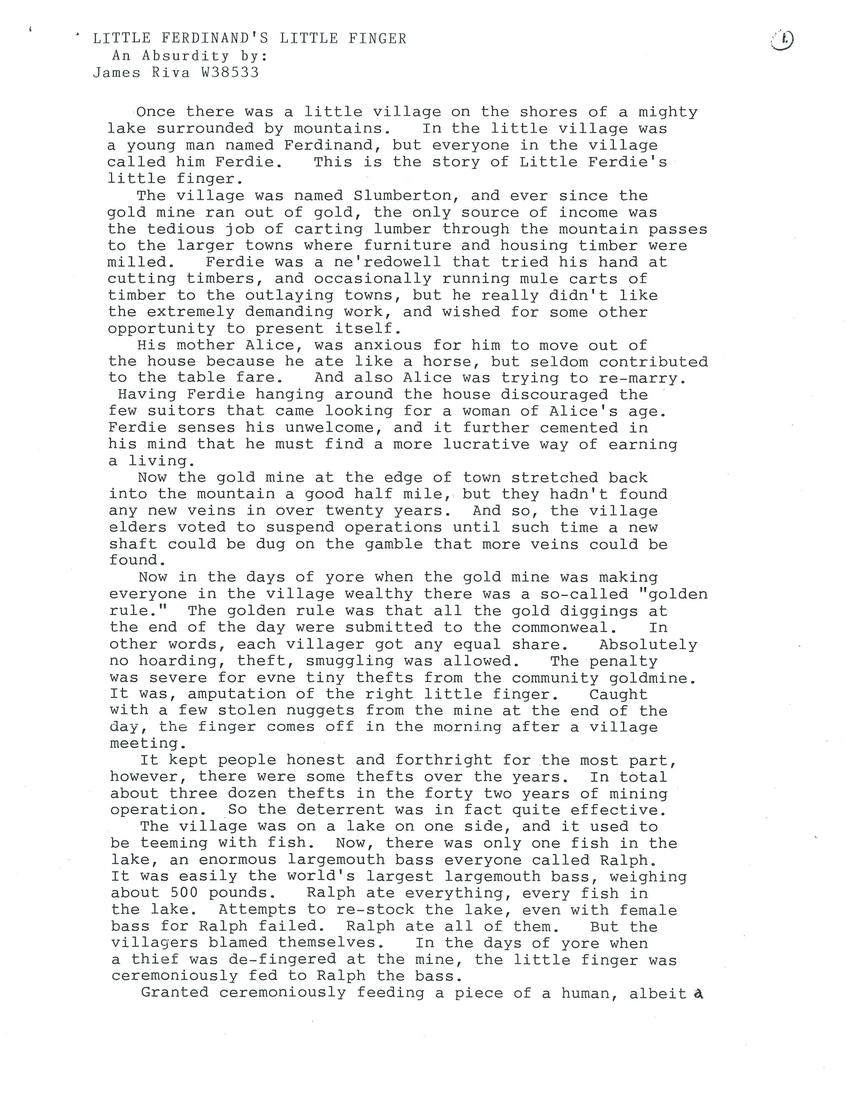 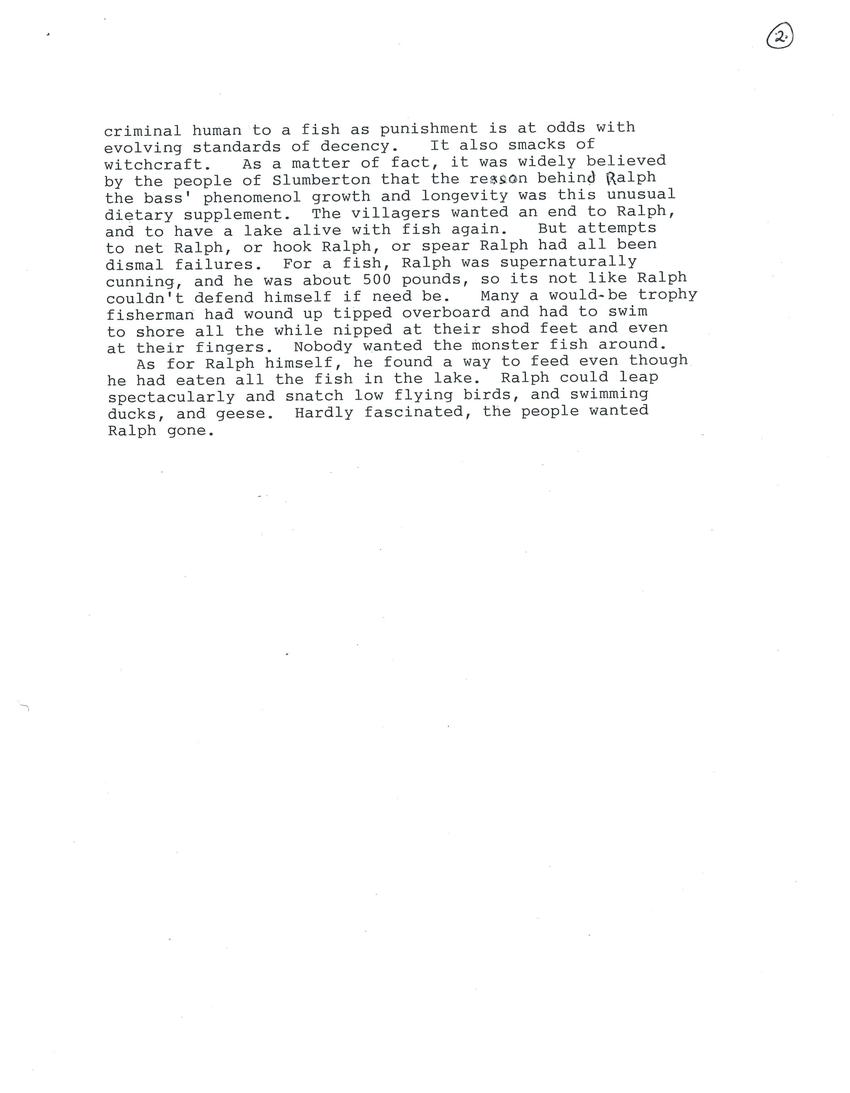 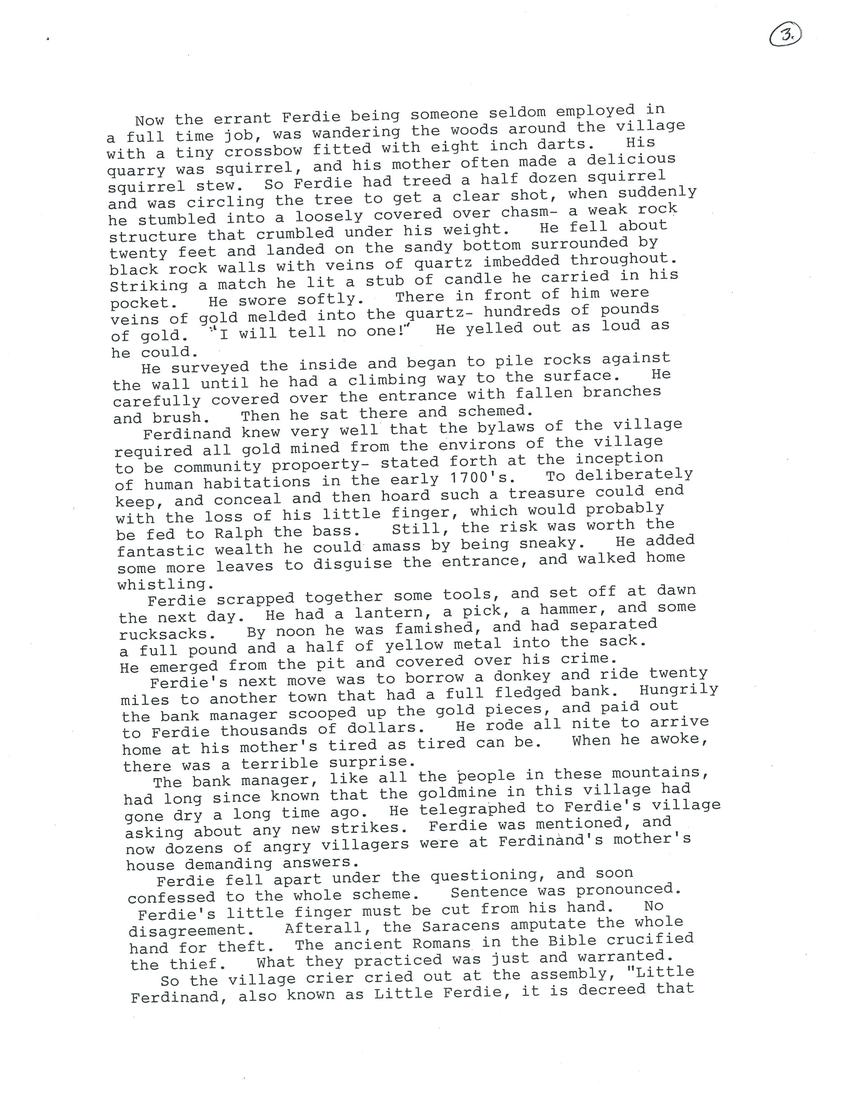 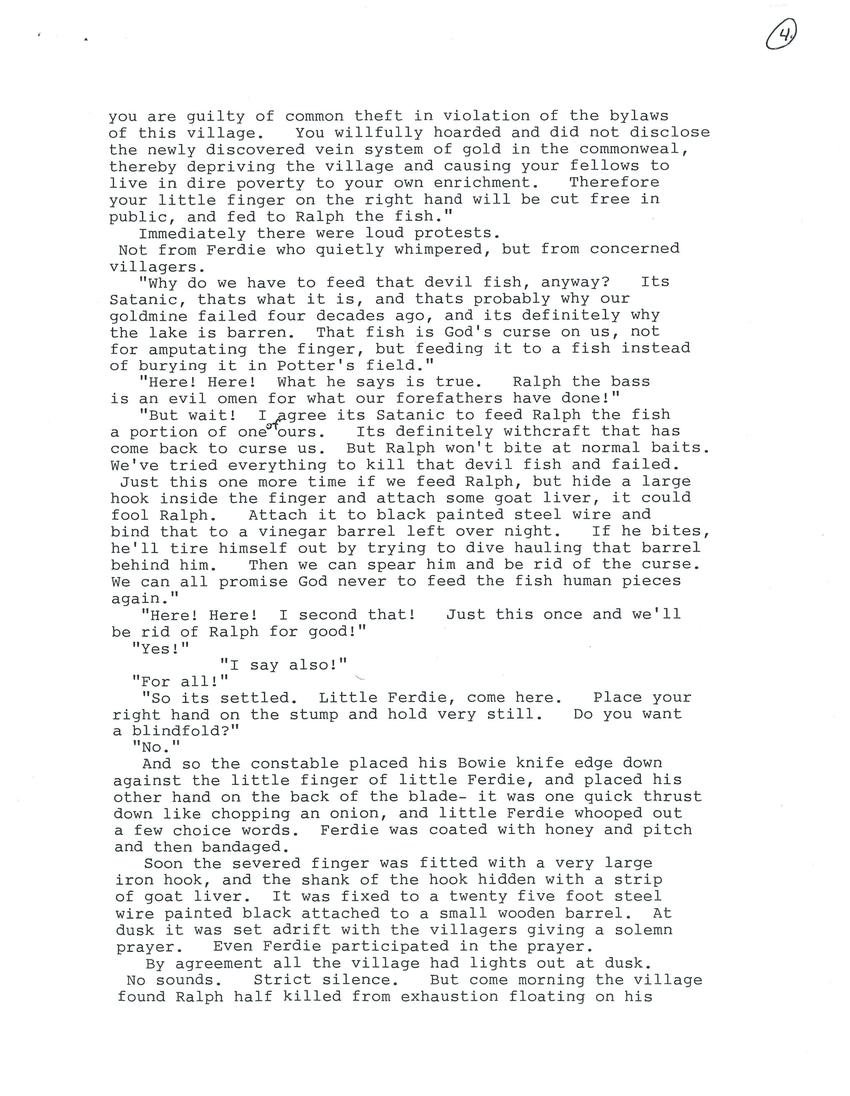 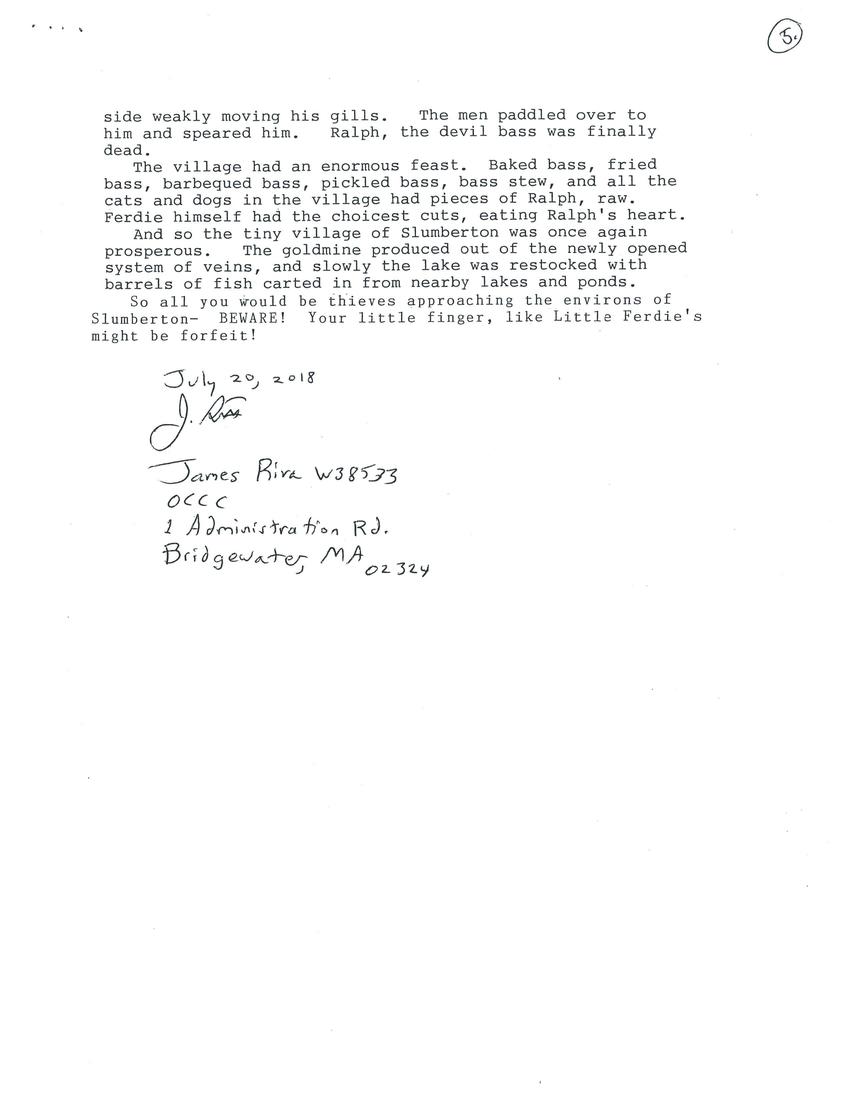 Once there was a little village on the shores of a mighty lake surrounded by mountains. In the little village was a young man named Ferdinand. This is the story of Little Ferdie's little finger.

The village was named Slumberton and, ever since the gold mine ran dry, the only source of income was the tedious job of carting lumber through the mountain pass to the larger towns where furniture and housing timber were milled. Ferdie was a ne'redowell who tried his hand at cutting timbers and occasionally running mule carts of timber to the outlaying towns, but he really didn't like the demanding work and wished for some other opportunity to present itself.

His mother Alice was anxious for him to move out of the house because he ate like a horse but seldom contributed to the table fare. And also, Alice was trying to remarry. Having Ferdie around the house discouraged the few suitors looking for a woman of Alice's age. Ferdie senses he is unwelcome, and it further cemented in his mind that he must find a more lucrative way of earning a living.

Now, the gold mine at the edge of town stretched into the mountains a good half mile, but they hadn't found any new veins in over twenty years. And so the village elders voted to suspend operations until such a new shaft could be dug for the gamble of finding new veins.

In the days of yore, when the gold mine was making everyone wealthy, there was a so-called "golden rule." The golden rule was that all the gold diggings at the end of the day were submitted to the commonwealth. In other words, each villager got equal share. Absolutely no hoarding, theft, or smuggling was allowed.

The penalty for disobedience was amputation of the right little finger. Even the tiniest of thefts spared none from its severity. Caught with a few stolen nuggets at the end of the day, the finger comes off in the morning after a village meeting. About three dozen thefts in the forty-two years of mining operation. The deterrent was quite effective. It kept people honest and forthright for the most part.

The village was on a lake on one side and used to be teeming with fish. Now, there was only one fish in the lake: an enormous largemouth bass everyone called Ralph. It was easily the world's largest largemouth bass at about 500 pounds. Ralph ate everything, every fish in the lake. Attempts to restock the lake—even with female bass for Ralph—failed. Ralph ate them all.

But the villagers blamed themselves. Whenever a little finger was chopped off at the mine, it was ceremoniously fed to Ralph. Feeding human flesh to a fish is at odds with the evolving standards of decency. It also smacks of witchcraft. It was widely believed by the villagers of Slumberton that Ralph's phenomenal growth and longevity was due to his unusual dietary supplement.

The villagers wanted an end to Ralph and a lake alive with fish again. Attempts to net Ralph, hook Ralph, or spear Ralph were all dismal failures. For a fish, Raplh was supernaturally cunning. And he weighed about 500 pounds, so it's not like Ralph was helpless to defend himself. Many would-be trophy fishermen wound up tipped overboard, swimming to shore while Ralph nipped at their feet and fingers. Nobody wanted the monster fish around.

As for Ralph himself, he found a way to feed himself. He could leap spectacularly after low-flying birds and swimming ducks and geese. Hardly fascinated, the people wanted Ralph gone.

Now, the errant Ferdie was seldom employed in a full-time job and wandered the woods around the village with a tiny crossbow fitted with eight-inch darts. His quarry was squirrel. His mother often makes a delicious squirrel stew. Fredie had treed a half dozen squirrel and was circling around a tree to get a clear shot when suddenly he stumbled into a loosely covered chasm. A weak rock structure crumbled under his weight. He fell about twenty feet and landed on the sandy bottom surrounded by black rock walls and veins of quartz.

He swore softly. Yet there, in front of his eyes, were veins of gold melded into the quartz. Hundreds of pounds of gold.

"I will tell no one!" He yelled as loud as he could.

He surveyed the inside and piled rocks against the wall to climb back to the surface. He carefully covered the entrance with fallen branches and brush. Then he sat there and schemed.

Ferdinand knew very well that the bylaws of the village required all gold mined to be village property, stated forth at the inception of human inhabitation in the early 1700s. To deliberately keep and conceal and hoard such a treasure could end with the loss of his little finger. Which would be fed to Ralph. Still, the risk was worth the fantastic wealth he could amass by being sneaky. He added some more leaves to disguise the entrance and walked home whistling.

Ferdie scrapped together some tools and set off at dawn the next day. He had a lantern, a pick, a hammer, and some rucksacks. By noon, he was famished and separated a pound and a half of yellow metal into the sack. He emerged from the pit and concealed his crime.

Ferdie's next move was to borrow a donkey and ride twenty miles to another town with a full-fledged bank. Hungrily, the bank manager scooped up the gold pieces and paid thousands of dollars out to Ferdie. He rode all night to arrive home to his mother's, tired as tired can be.

When he awoke, there was a terrible surprise. The bank manager, like all the people in these mountains, had long since known about the gold mine being dry. He telegraphed to Ferdie's village asking about any new strikes. Ferdie was mentioned and now dozens of angry villagers were at his home demanding answers.

Ferdie fell apart under the questioning and soon confessed to the whole scheme. Sentence was pronounced. Ferdie's little finger must be cut from his hand. No disagreement. After all, the Saracens amputate the whole hand. The ancient Romans crucified the thief. What they practiced was just and warranted.

So the village crier cried out at the assembly, "Little Ferdinand, also known as Little Ferdie, it is decreed that you are guilty of common theft in violation of the bylaws of this village. You willfully hoarded and did not disclose the newly discovered vein system of gold in the commonwealth, thereby depriving the village and causing your fellows to live in dire poverty to your own enrichment. Therefore, your little finger on your right hand shall be cut free in public and fed to Ralph the Bass."

Immediately, there were loud protests. Not from Ferdie, who quietly whimpered, but from concerned villagers.

"Why do we have to feed that devil fish anyway? It's satanic, that's what it is. That's probably why our gold mine failed four decades ago, and it's definitely why the lake is barren. That fish is God's curse on us. Not for amputating the finger, but feeding it to that fish instead of burying it in Potter's fiel.d'
"Here, here! What he says is true. Ralph the Bass is an evil omen for what our forefathers had done!"
"But wait! I agree it's satanic to feed Ralph a portion of us. It's definitely witchcraft that has come back to curse us. But Ralph won't bite at normal baits. We've tried everything to kill that devil fish and failed. Just one more time. If we feed Ralph but hid a large hook inside the finger with some goat liver, it could fool Ralph. Attach it to black-painted steel wire and bind that to a vinegar barrel left overnight. If he bites, he'll tire himself out by trying to dive, hauling that barrel behind him. Then we can spear him and be rid of our curse. We can all promise God never to feed the fish human flesh again."
"Here, here! I second that! Just this once, and we'll be rid of Ralph for good!"
"Yes!"
"I say so also!"
"For all!"
"So, it's settled. Little Ferdie, come here. Place your right hand on the stump and hold very still. Do you want a blindfold?"
"No."

And so the constable placed his bowie knife edge down against the little finger of Little Ferdie and placed his other hand on the back of the blade. It was one quick thrust down like chopping an inion. Little Ferdie whooped out a few choice words. Ferdie was coated with honey and pitch before he was bandaged.

Soon the severed finger was fitted with a very large iron hook, and the shank of the hook was hidden in a strip of goat liver. It was fixed to a twenty-five foot steel wire painted black attached to a small wooden barrel. At dusk, it was set adrift with the villagers giving a solemn prayer. Even Ferdie participated.

By agreement, all the villagers had lights out at dusk. No sounds. Strict silence. But come morning, the village found Ralph half-killed from exhaustion, floating on his side, weakly moving his gills. The men paddled over and speared him. Ralph the devil bass was finally dead.

The village had an enormous feast. Baked bass, fried bass, barbecued bass, pickled bass, bass stew, and all the cats and dogs in the village had pieces of Ralph—raw. Ferdie had the choicest cuts, eating Ralph's heart.

And so the tiny village of Slumberton was once again prosperous. The gold mine produced from the newly opened veins and, slowly, the lake was restocked with barrels of fish carted in from nearby lakes and ponds.

So all you would-be thieves approaching the environs of Slumberton—BEWARE! Your little finger, like Little Ferdie's, might be forfeit!

Paranoia, and friendship
So flycatcher wasn't your best friend
I found my own blood in his house
And the judgement predetermined, plain as daylight
I had, tis true, enmade every celebrity
Now all I can say is 666
If thou lovest not the brother whom thou knowest
How canst thou love the lord, whom thou knowest not
My lord met you two days, and was much gladdenned
But the third day he refused
Mohammed and you shall no doubt remain
Enlegendary, like the movement of the clouds
(scanned reply – view as blog post)
uploaded Dec. 4, 2018.  Original (PDF) 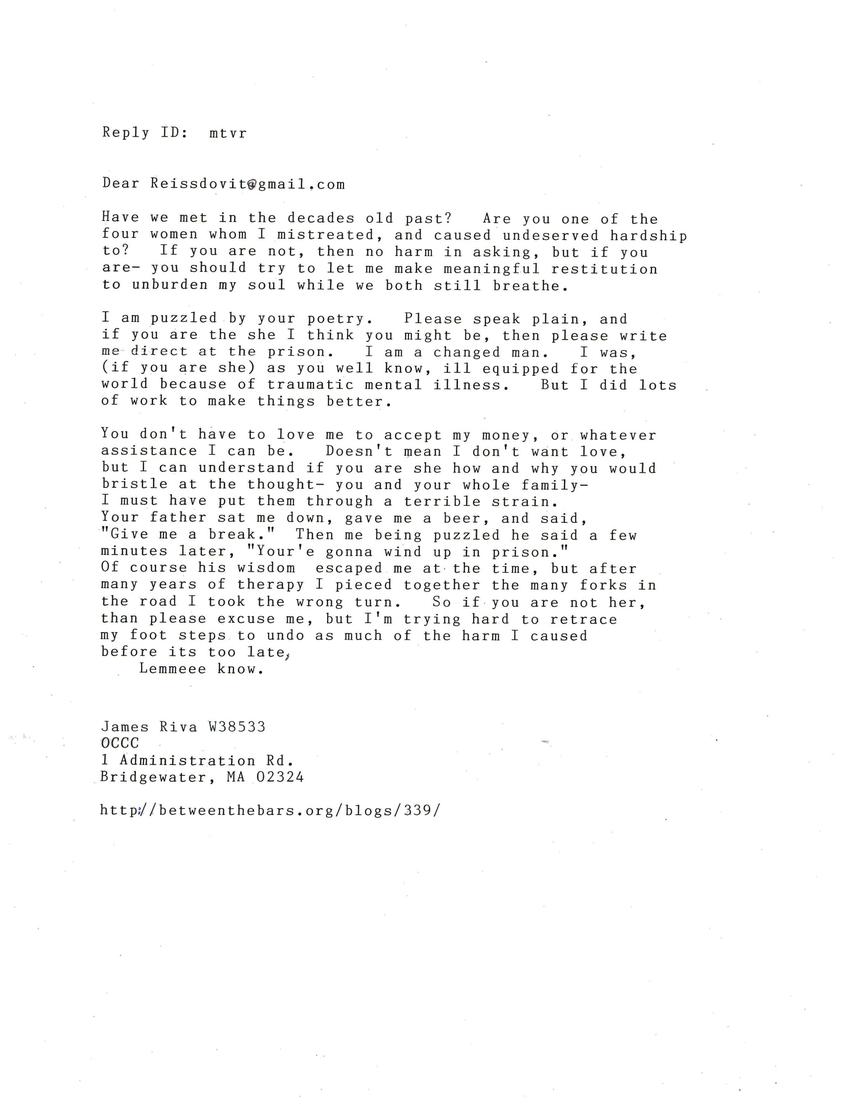 fantastic story. It kept me hooked through to the end. I could picture the town and the fish! Writing has always been such a huge coping mechanism for me to deal with my emotions and mental health issues. It sounds like you're putting in the hard work to figure out what makes you tick. Keep going man! You'll do great!
(scanned reply – view as blog post)
uploaded Jan. 27, 2019.  Original (PDF)