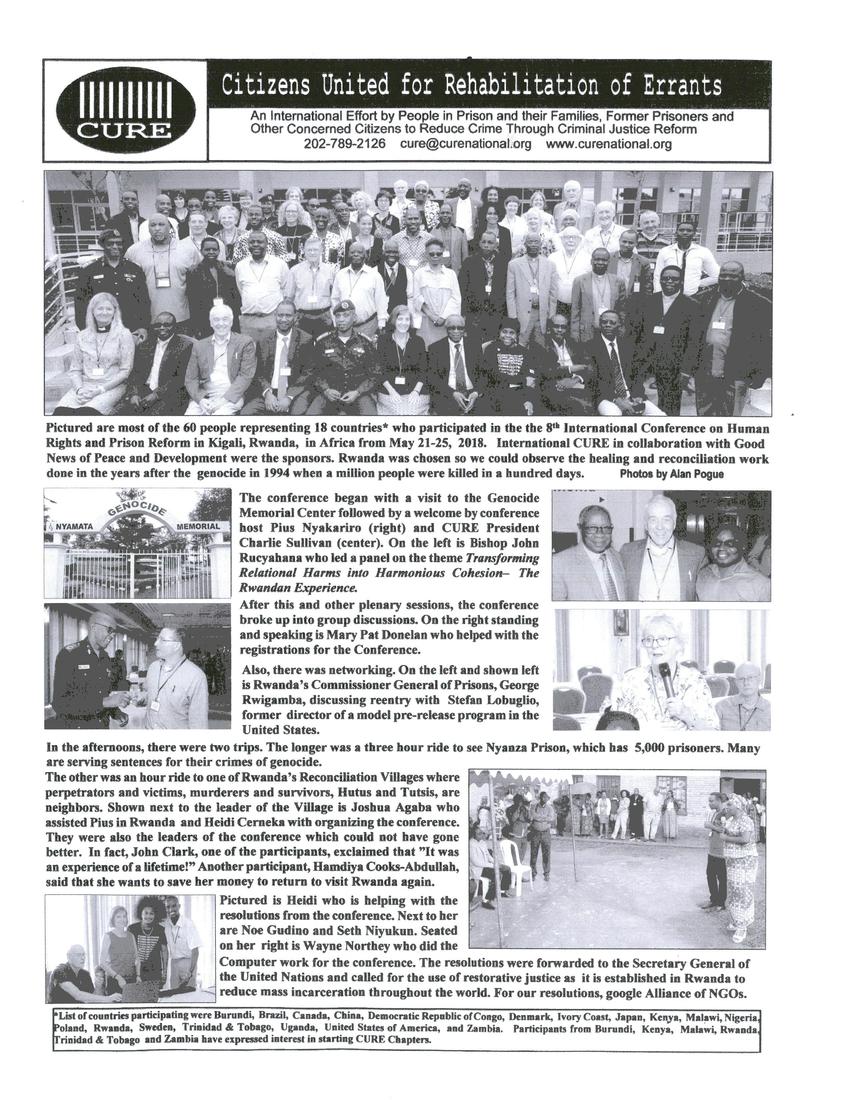 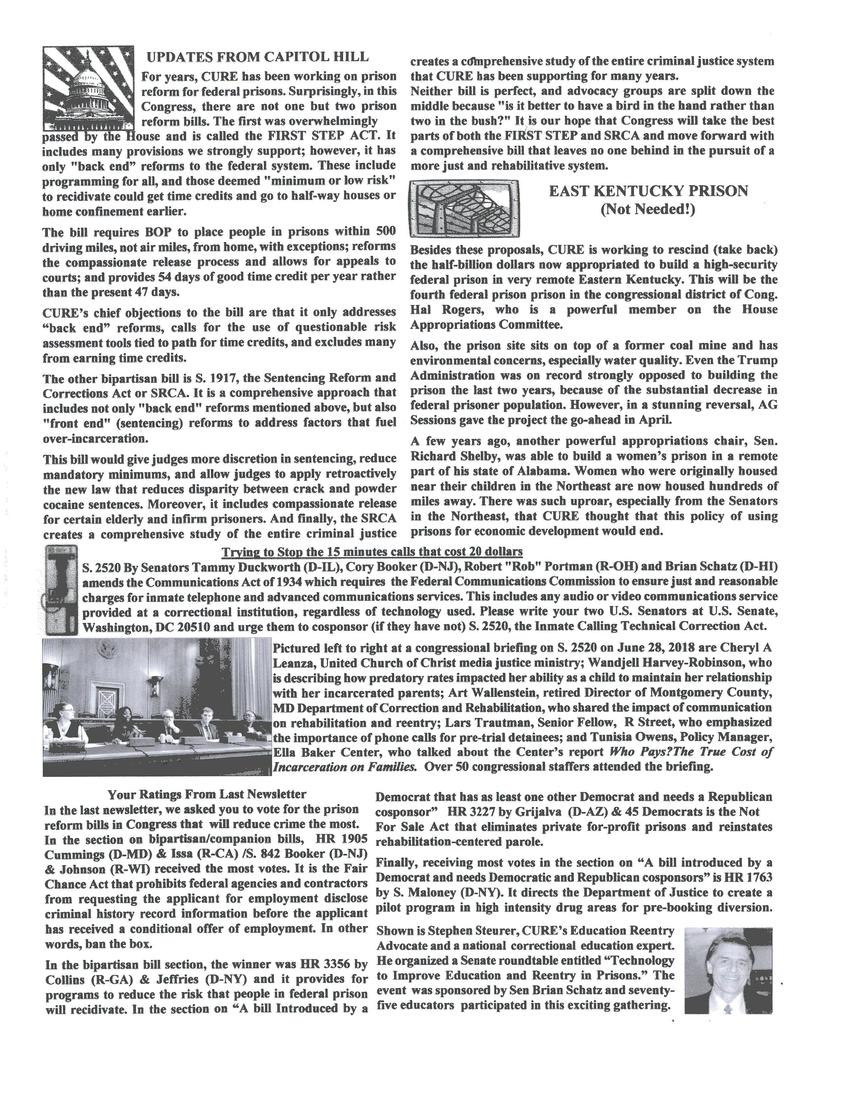 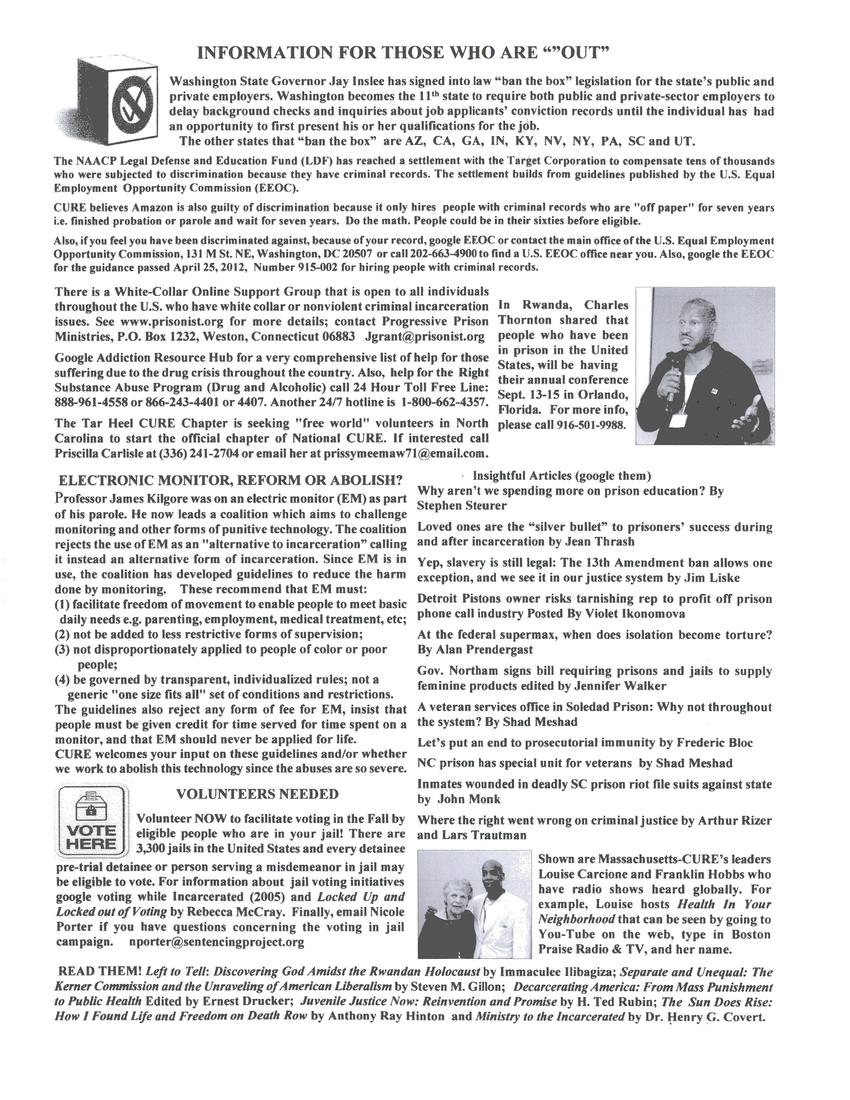 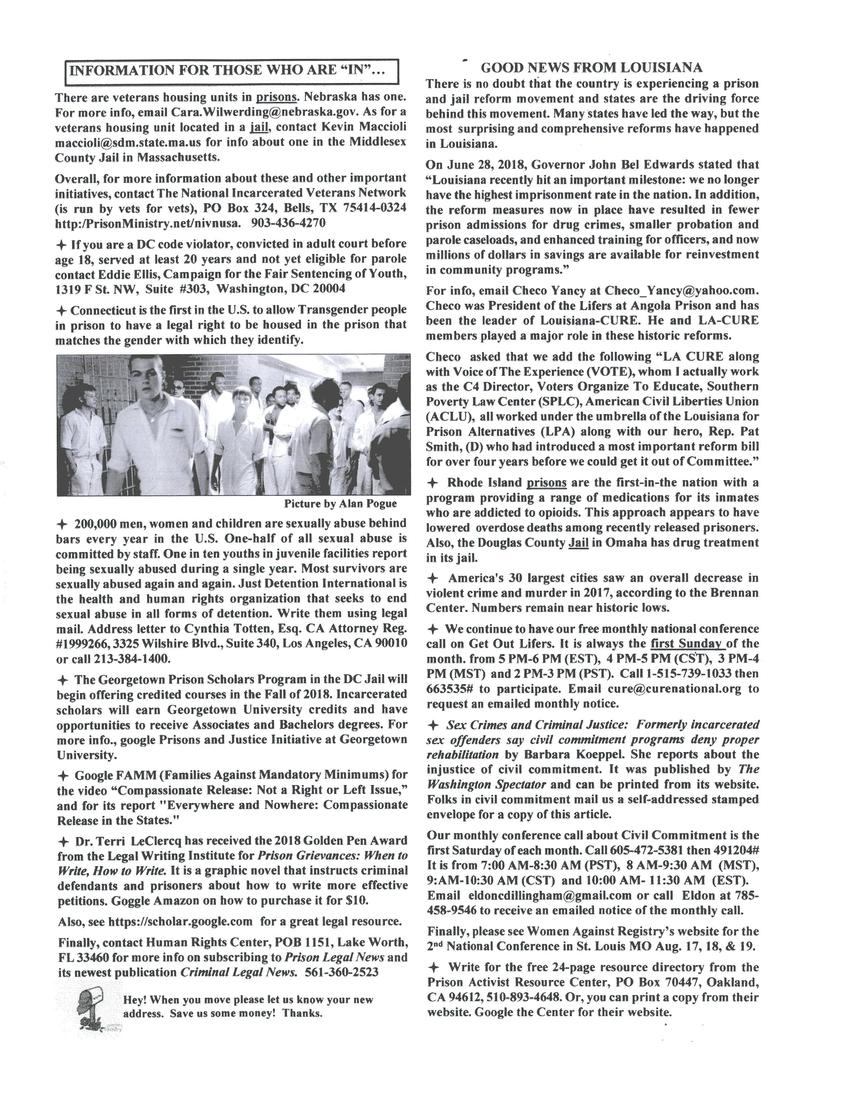 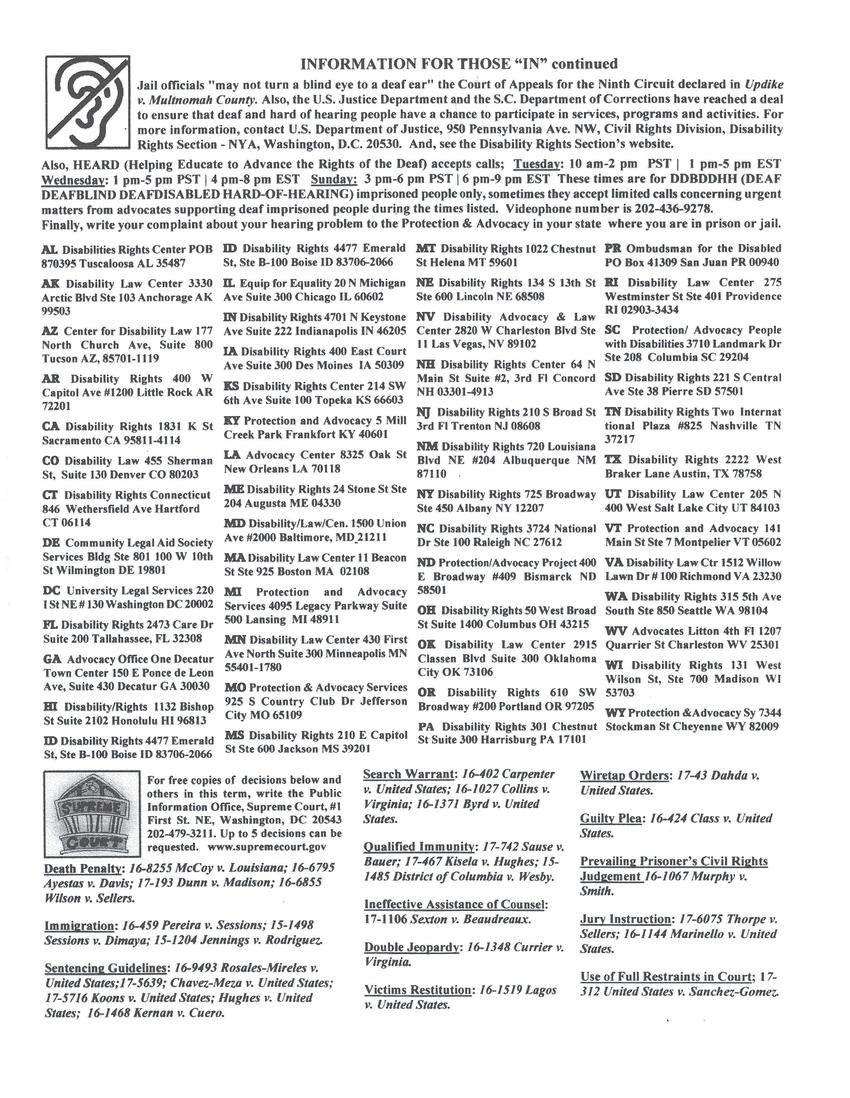 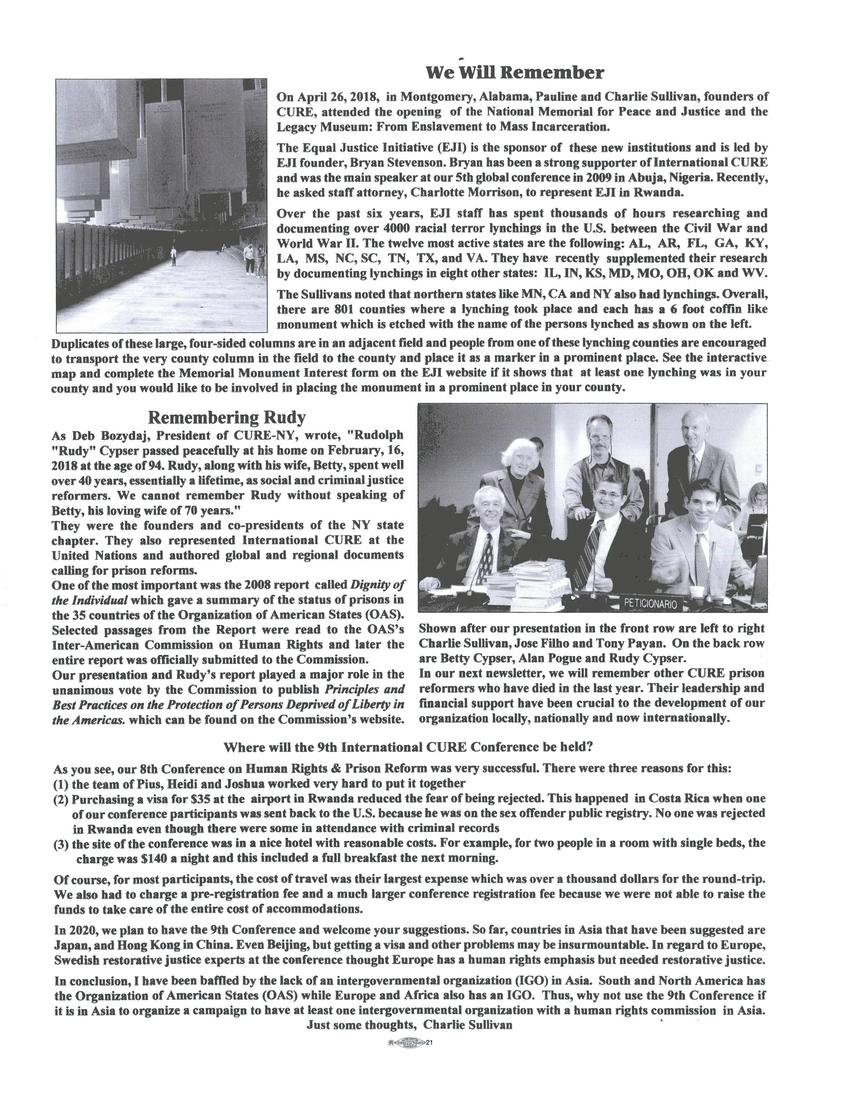 An International Effort by People in Prison and their Families, Former Prisoners and Other Concerned Citizens to Reduce Crime Through Criminal Justice Reform

Pictured are most of the 60 people representing 18 countries* who participated in the 8th International Conference on Human Rights and Prison Reform in Kigali, Rwanda, in Africa from May 21-25, 2018. International CURE in collaboration with Good News of Peace and Development were the sponsors. Rwanda was chosen so we could observe the healing and reconciliation work done in the years after the genocide in 1994 when a million people were killed in a hundred days. Photos by Alan Pogue

The conference began with a visit to the Genocide Memorial Center followed by a welcome by conference host Pius Nyakariro (right) and CURE President Charlie Sullivan (center). On the left is Bishop John Rucyahana who led a panel on the theme Transforming Relational Harms into Harmonious Cohesion - The Rwandan Experience.

After this and other plenary sessions, the conference broke up into group discussions. On the right standing and speaking is Mary Pat Donelan who helped with the registrations for the Conference.

Also, there was networking. On the left and shown left is Rwanda's Commissioner General of Prisons, George Rwigamba, discussing re-entry with Stefan Lobuglio, former director of a model pre-release program in the United States.

In the afternoons, there were two trips. The longer was a three hour ride to see Nyanza Prison, which has 5,000 prisoners. Many are serving sentences for their crimes of genocide.
The other was an hour ride to one of Rwanda's Reconciliation Villages where perpetrators and victims, murderers and survivors, Hutus and Tutsis, are neighbors. Shown next to the leader of the Village is Joshua Agaba who assisted Pius in Rwanda and Heidi Cerneka with organizing the conference. They were also the leaders of the conference which could not have gone better. In fact, John Clark, one of the participants, exclaimed that "It was an experience of a lifetime!" Another participant, Hamdiya Cooks-Abdullah, said that she wants to save her money to return to visit Rwanda again.

Pictured is Heidi who is helping with the resolutions from the conference. Next to her are Noe Gudino and Seth Niyukun. Seated on her right is Wayne Northey who did the Computer work for the conference. The resolutions were forwards to the Secretary General of the United Nations and called for the use of restorative justice as it is established in Rwanda to reduce mass incarceration throughout the world. For our resolution, google Alliance of NGOs.

For years, CURE has been working on prison reform for federal prisons. Surprisingly, in this Congress, there are not one but two prison reform bills. The first was overwhelmingly passed by the House and is called the FIRST STEP ACT. It includes many provisions we strongly support; however, it has only "back end" reforms to the federal system. These include programming for all, and those deemed "minimum or low risk" to recidivate could get time credits and go to half-way houses or home confinement earlier.

The bill requires BOP to place people in prisons within 500 driving miles, not air miles, from home, with exceptions; reforms the compassionate release process and allows for appeals to courts; and provides 54 days of good time credit per year rather than the present 47 days.

CURE's chief objections to the bill are that it only addresses "back end" reforms, calls for the use of questionable risk assessment tools tied to path for time credits, and excludes many from earning time credits.

The other bipartisan bill is S. 1917, the Sentencing Reform and Corrections Act or SRCA. It is a comprehensive approach that includes not only "back end" reforms mentioned above, but also "front end" (sentencing) reforms to address factors that fuel over-incarceration.