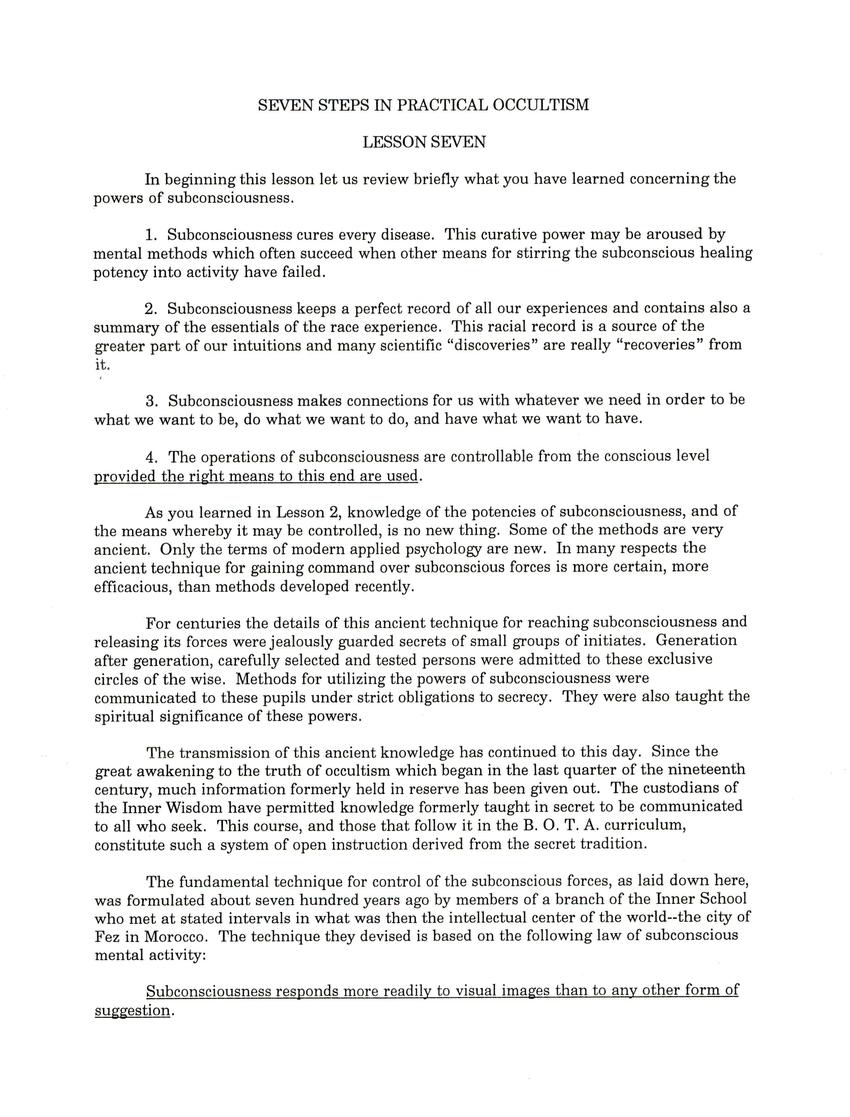 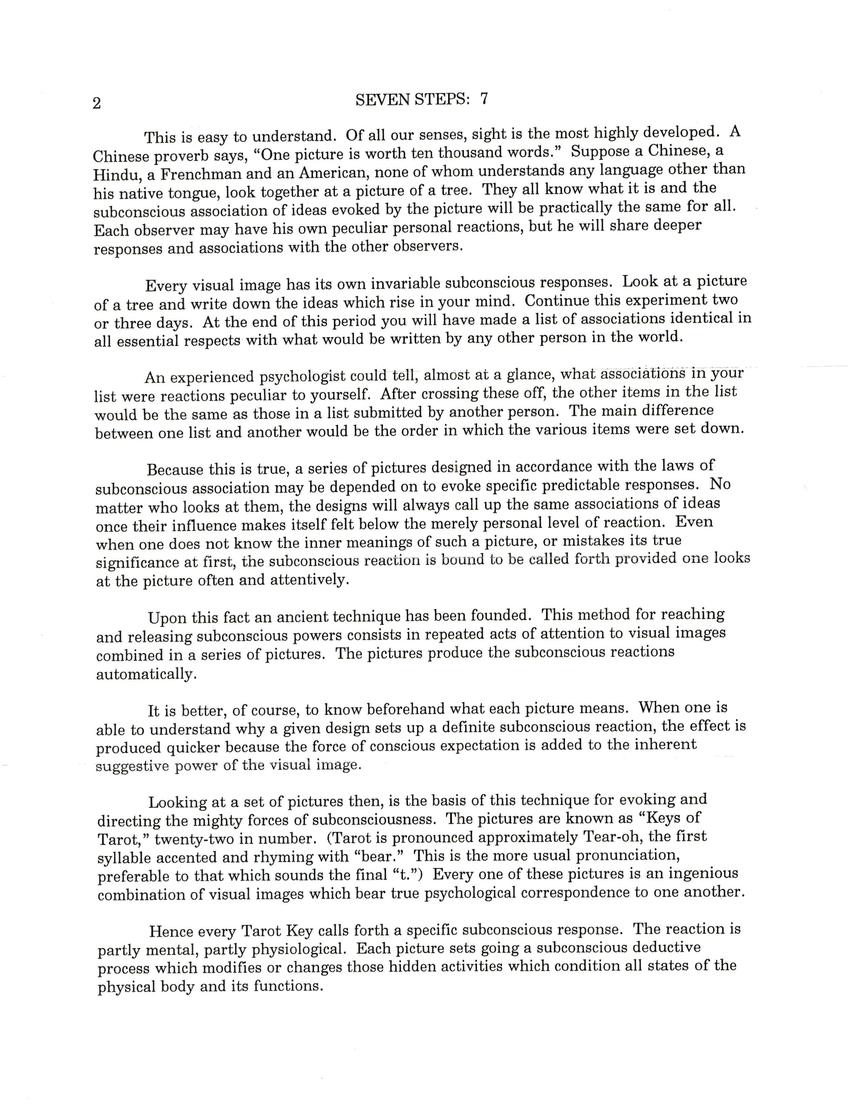 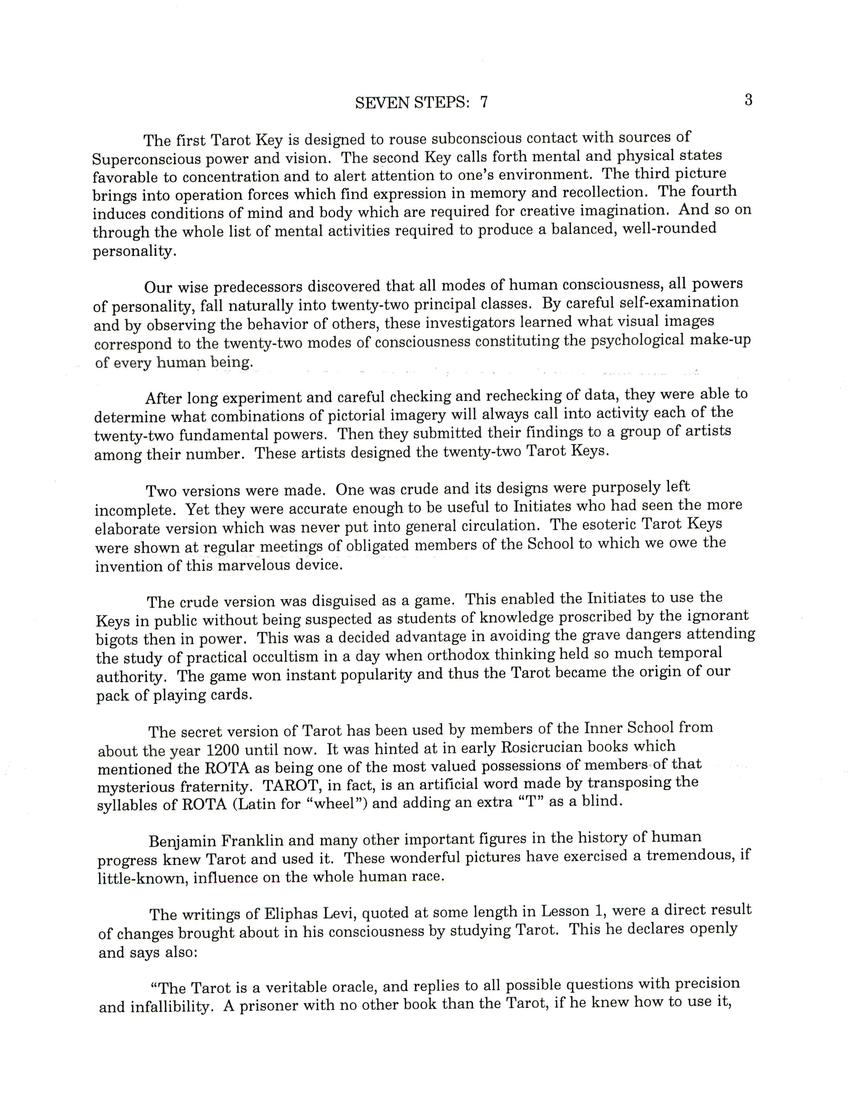 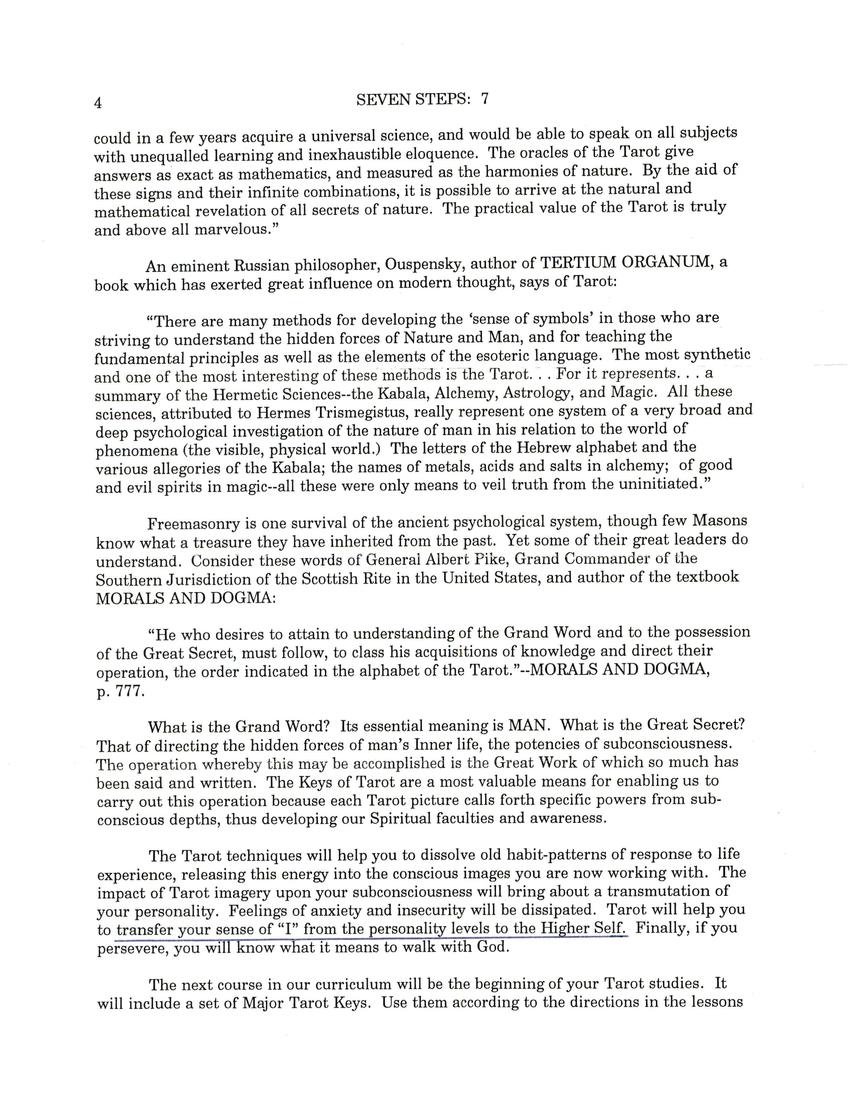 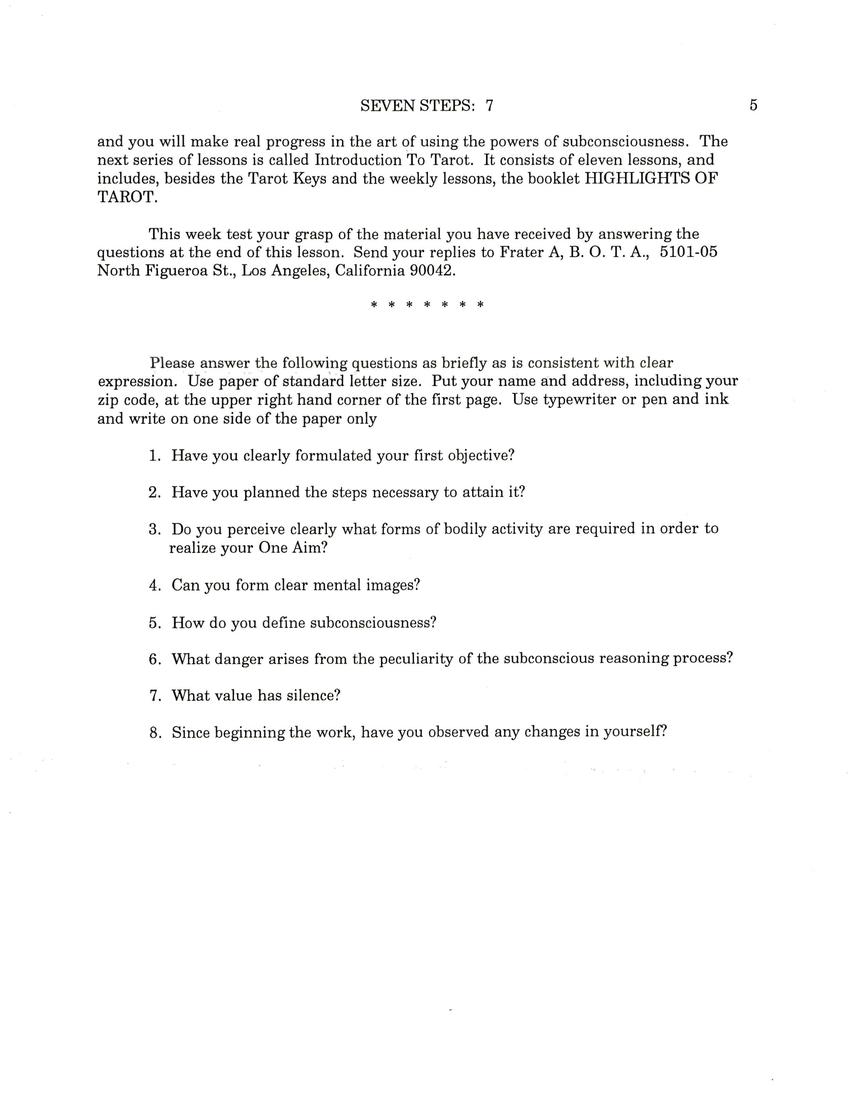 In beginning this lesson let us review briefly what you have learned concerning the powers of subconsciousness.

1. Subconsciousness cures every disease. This curative power may be aroused by mental methods which often succeed when other means for stirring the subconscious healing potency into activity have failed.

2. Subconsciousness keeps a perfect record of all our experiences and contains also a summary of the essentials of the race experience. This racial record is a source of the greater part of our intuitions and many scientific "discoveries" and really "recoveries" from it.

4. The operations of subconsciousness are controllable from the conscious level provided the right means to this end are used.

As you learned in Lesson 2, knowledge of the potencies of subconsciousness, and of the means whereby it may be controlled, is no new thing. Some of the methods are very ancient. Only the terms of modern applied psychology are new. In many respects the ancient technique for gaining command over subconscious forces is more certain, more efficacious, than methods developed recently.

For centuries the details of this ancient technique for reaching subconsciousness and releasing its forces were jealously guarded secrets of small groups of initiates. Generation after generation, carefully selected and tested persons were admitted to these exclusive circles of the wise. Methods for utilizing the powers of subconsciousness were communicated to these pupils under strict obligations to secrecy. They were also taught the spiritual significance of these powers.

The transmission of this ancient knowledge has continued to this day. Since the great awakening to the truth of occultism which began in the last quarter of the nineteenth century, much information formerly held in reserve has been given out. The custodians of the Inner Wisdom have permitted knowledge formerly taught in secret to be communicated to all who seek. This course, and those that follow it in the B. O. T. A. curriculum, constitute such a system of open instruction derived from the secret tradition.

The fundamental technique for control of the subconscious forces, as laid down here, was formulated about seven hundred years ago by members of a branch of the Inner School who met at stated intervals in what was then the intellectual center of the world--the city of Fez in Morocco. The technique they devised is based on the following law of subconscious mental activity:

Subconsciousness responds more readily to visual images than to any other form of suggestion.

This is easy to understand. Of all our senses, sight is the most highly developed. A Chinese proverb says, "One picture is worth ten thousand words." Suppose a Chinese, a Hindu, a Frenchman and an American, none of whom understands any language other than his native tongue, look together at a picture of a tree. They all know what it is and the subconscious association of ideas evoked by the picture will be practically the same for all. Each observer may have his own peculiar personal reactions, but he will share deeper responses and associations with the other observers.

Every visual image has its own invariable subconscious responses. Look at a picture of a tree and write down the ideas which rise in your mind. Continue this experiment two or three days. At the end of this period you will have made a list of associations identical in all essential respects with what would be written by any other person in the world.

An experienced psychologist could tell, almost at a glance, what associations in your list were reactions peculiar to yourself. After crossing these off, the other items in the list would be the same as those in a list submitted by another person. The main difference between one list and another would be the order in which the various items were set down.

Because this is true, a series of pictures designed in accordance with the laws of subconscious association may be depended on to evoke specific predictable responses. No matter who looks at them, the designs will always call up the same associations of ideas once their influence makes itself felt below the merely personal level of reaction. Even when one does not know the inner meanings of such a picture, or mistakes its true significance at first, the subconscious reaction is bound to be called forth provided one looks at the picture often and attentively.

Upon this fact an ancient technique has been founded. This method for reaching and releasing subconscious powers consist in repeated acts of attention to visual images combined in a series of pictures. The pictures produce the subconscious reactions automatically.

It is better, of course, to know beforehand what each picture means. When one is able to understand why a given design sets up a definite subconscious reaction, the effect is produced quicker because the force of conscious expectation is added to the inherent suggestive power of the visual image.

Looking at a set of pictures then, is the basis of this technique for evoking and directing the mighty forces of subconsciousness. The pictures are known as "Keys of Tarot," twenty-two in number. (Tarot is pronounced approximately Tear-oh, the first syllable accented and rhyming with "bear." This is the more usual pronunciation, preferable to that which sounds the final "t.") Every one of these pictures is an ingenious combination of visual images which bear true psychological correspondence to one another.

Hence every Tarot Key calls forth a specific subconscious response. The reaction is partly mental, partly physiological. Each picture sets going a subconscious deductive process which modifies of changes those hidden activities which condition all states of the physical body and its functions.