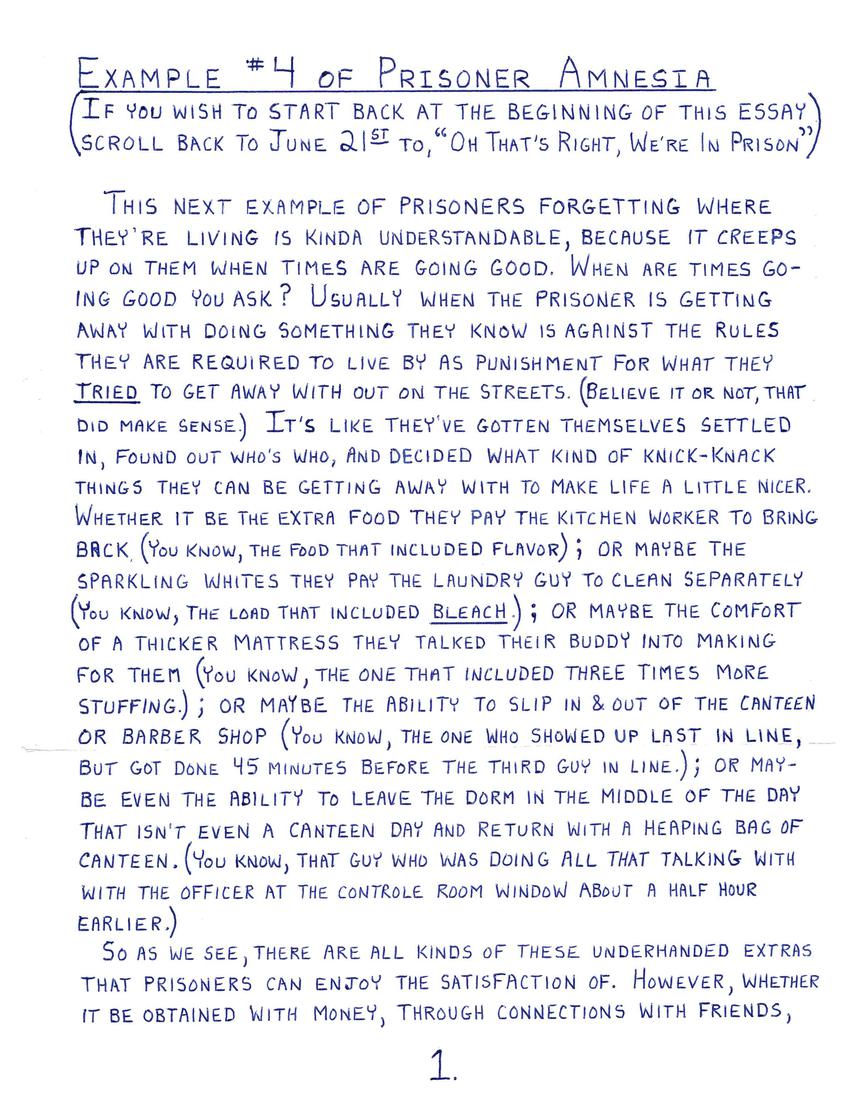 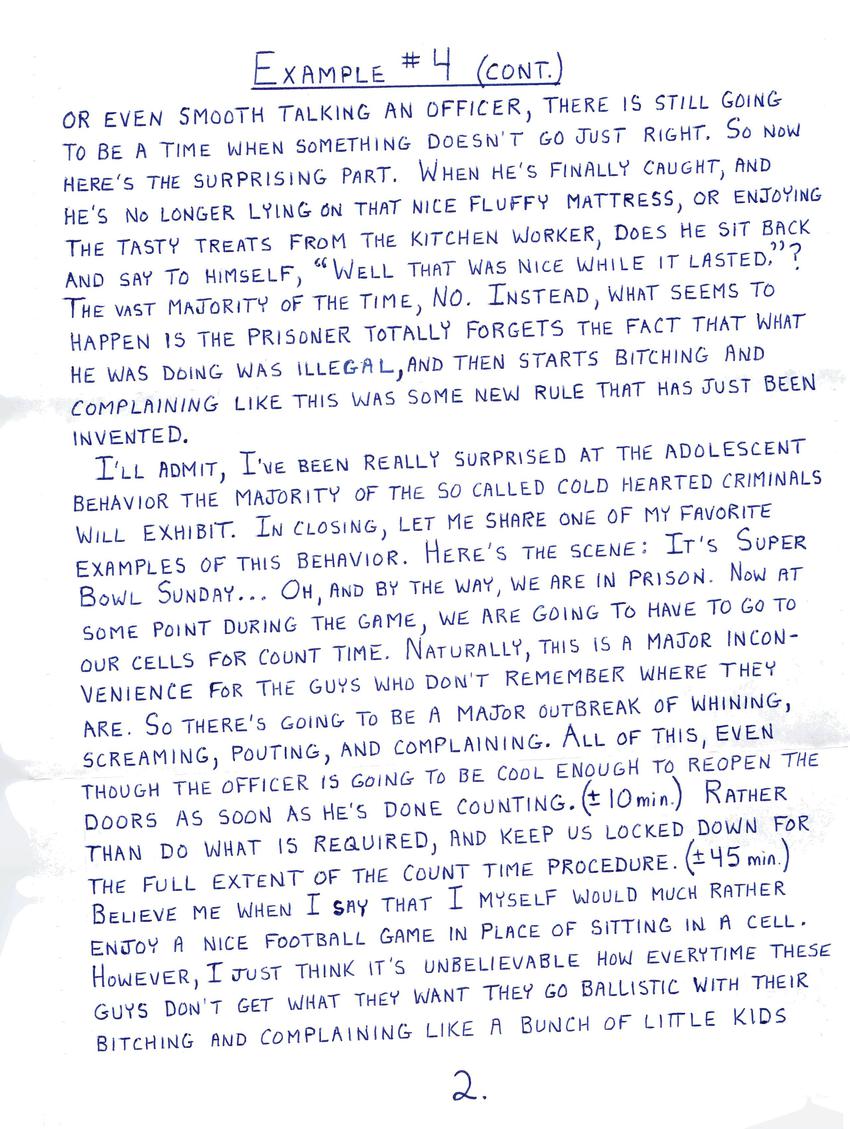 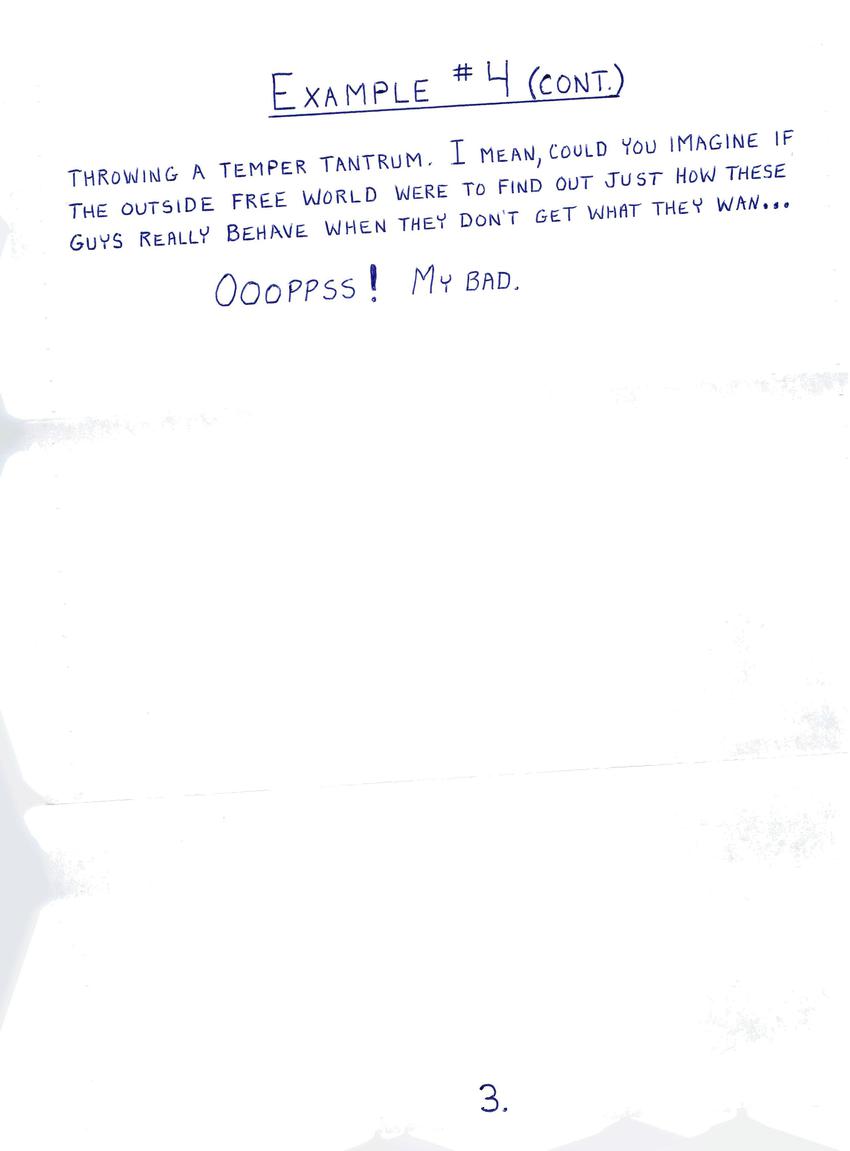 Example #4 of Prisoner Amnesia
(If you wish to start back at the beginning of this essay scroll back to June 21st to, "Oh that's right, we're in prison")

This next example of prisoners forgetting where they're living is kinda understandable, because it creeps up on them when times are going good. When are times going good you ask? Usually when the prisoner is getting away with doing something they know is against the rules they are required to live by as punishment for what they tried to get away with out on the streets. (Believe it or not, that did make sense.)

It's like they've gotten themselves settled in, found out who's who, and decided what kind of knick-knack things they can be getting away with to make life a little nicer. Whether it be the extra food they pay the kitchen worker to bring back (you know, the food that included flavour); or maybe the sparkling whites they pay the laundry guy to clean separately (you know, the load that included bleach); or maybe the comfort of a thicker mattress they talked their buddy into making for them (you know, the one that included three times more stuffing.); or maybe the ability to slip in & out of the canteen or barber shop (you know, the one who showed up last in line, but got done 45 minutes before the third guy in line.); or maybe even the ability to leave the dorm in the middle of the day that isn't even a canteen day and return with a heaping bag of canteen. (You know, that guy who was doing all that thinking with the officer at the control room window about a half hour earlier.)

So as we see, there are all kinds of these underhanded extras that prisoners can enjoy the satisfaction of. However, whether it be obtained with money, through connections with friends, or even smooth talking an officer, there is still going to be a time when something doesn't go just right. So now here's the surprising part. When he's finally caught, and he's no longer lying on that nice fluffy mattress, or enjoying the tasty treats from the kitchen worker, does he sit back and say to himself, "Well, that was nice while it lasted"? The vast majority of the time, no. Instead, what seems to happen is the prisoner totally forgets the fact that what he was doing was illegal and starts bitching and complaining like this was some new rule that has just been invented.

I'll admit, I've been really surprised at the adolescent behavior the majority of the so-called cold-hearted criminals will exhibit. In closing, let me share one of my favorite examples of this behavior.

Here's the scene: it's Super Bowl Sunday. Oh, by the way, we are in prison. Now at some point during the game, we are going to have to go to our cells for count time. Naturally, this is a major inconvenience for the guys who don't remember where they are. So there's going to be a major whining outbreak, screaming, pouting, and complaining. All of this, even though the officer is going to be cool enough to reopen the doors as soon as he's done counting (10+ minutes) rather than do what is required and keep us locked down for the full extent of the procedure (45+ minutes). Believe me when I say that I myself would much rather enjoy a nice football game in place of sitting in a cell.