Wat It's Like to Lose Your Mind In Prison. (Literally) 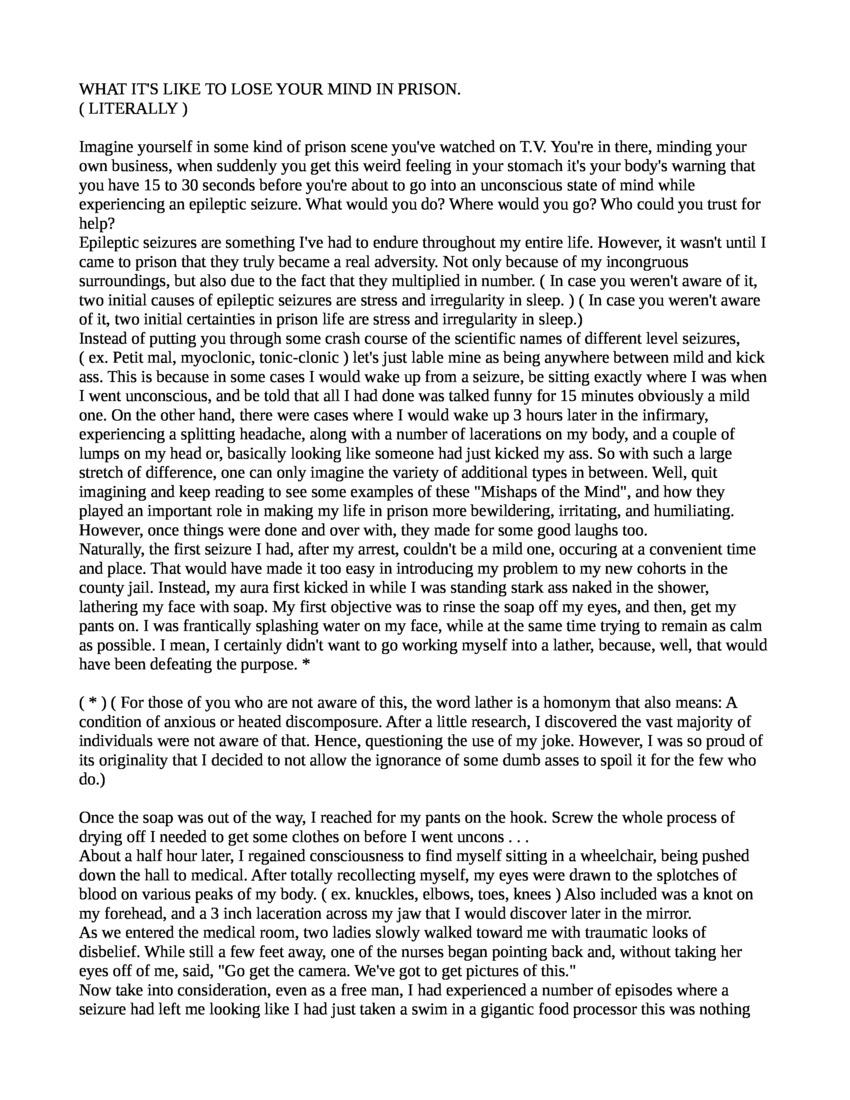 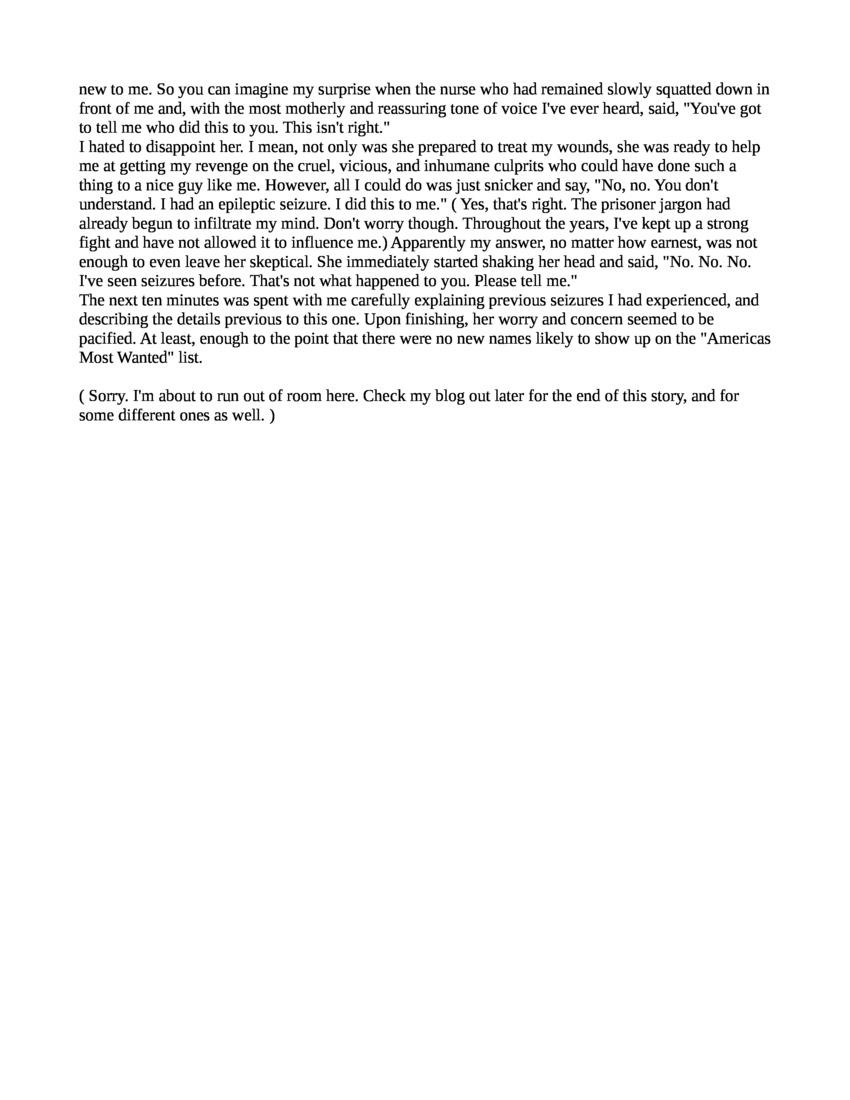 WHAT IT'S LIKE TO LOSE YOUR MIND IN PRISON.
(LITERALLY)

Imagine yourself in some kind of prison scene you've watched on T.V. You're in there, minding your own business, when suddenly you get this weird feeling in your stomach it's your body's warning that you have 15 to 30 seconds before you're about to go into an unconscious state of mind while experiencing an epileptic seizure. What would you do? Where would you go? Who could you trust for help?

Instead of putting you through some crash course of the scientific names of different level seizures, ( ex. Petit mal, myoclonic, tonic-clonic) let's just label mine as being anywhere between mild and kick ass. This is because in some cases I would wake up from a seizure, be sitting exactly where I was when I went unconscious, and be told that all I had done was talked funny for 15 minutes obviously a mild one. On the other hand, there were cases where I would wake up 3 hours later in the infirmary, experiencing a splitting headache, along with a number of lacerations on my body, and a couple of lumps on my head or, basically looking like someone had just kicked my ass. So with such a large stretch of difference, one can only imagine the variety of additional types in between. Well, quit imagining and keep reading to see some examples of those "Mishaps of the Mind", and how they played an important role in making my life in prison more bewildering, irritating and humiliating.

However, once things were done and over with, they made for some good laughs too.

Naturally, the first seizure I had, after my arrest, couldn't be a mild one, occurring at a convenient time and place. That would have made it too easy in introducing my problem to my new cohorts in the county jail. Instead, my aura first kicked in while I was standing stark ass naked in the shower, lathering my face with soap. My first objective was to rinse the soap off my eyes and then get my pants on. I was frantically splashing water on my face while, at the same time, trying to remain as calm as possible. I mean, I certainly didn't want to go working myself into a lather because, well, that would have been defeating the purpose.*

* For those of you who are not aware of this, the word "lather" is a homonym that also means: a condition of anxious or heated discomposure. After a little research, I discovered the vast majority of individuals were not aware of that. Hence, questioning the use of my joke. However, I was so proud of its originality that I decided not to allow the ignorance of some dumb asses to spoil it for the few who do.

Once the soap was out of the way, I reached for my pants on the hook. Screw the whole process of drying off, I needed to get some clothes on before I went uncons.

After a half hour later, I regained consciousness to find myself sitting in a wheelchair, being pushed down the hall to medical. After today reconnecting myself, my eyes were drawn to the splotches of blood on various peaks of my body (ex. knuckles, elbows, toes, knees). Also included was a knot on my forehead, and a three inch laceration across my jaw that I would discover later in the mirror.

As we entered the medical room, two ladies slowly walked toward me with traumatic looks of disbelief. While still a few feet away, one of the nurses began pointing back and, without taking her eyes off me, said, "Go get the camera. We've got to get pictures of this."

Now take into consideration that, even as a free man, I had experienced a number of episodes where a seizure had left me looking like I had just taken a swim in a gigantic food processor, this was nothing new to me. So you can imagine my surprise when the nurse who had remained slowly squatted down in front of me and, with the most motherly and reassuring tone of voice I've ever heard, said, "You've got to tell me who did this to you. This isn't right."

I hated to disappoint her. I mean, not only was she prepared to treat my wounds, she was ready to help me at getting my revenge on the cruel, vicious, and inhumane culprits who could have done such a thing to a nice guy like me. However, all I could do was snicker and say, "No, no. You don't understand. I had an epileptic seizure. I did this to me." (Yes, that's right. The prisoner jargon had already begun to influence my mind. Don't worry though. Throughout the years, I've kept up a strong fight and have not allowed it to influence me).

Apparently my answer, no matter how earnest, was not enough to even leave her skeptical. She immediately started shaking her head and said, "No, no, no. I've seen seizures before. That's not what happened to you. Please tell me."

The next ten minutes were spent with me carefully explaining previous seizures I had experienced and describing the details previous to this one. Upon finishing, her worry and concern seemed to be pacified. At least enough to the point that there were no new names likely to show up on the America's Most Wanted List.

Sorry, I'm about to run out of room here. Check my blog out later for the end of this story, and for some different ones as well.

I've seen a big seizure once. Eventhough I was prepared for one through regular first aid training it was quite something to witness it in real life. A young bloke (around 20) was waiting for a traffic light on his bike. It was a big, busy and complicated junction. Suddenly we heard him roaring a few times a bit like the MGM lion before those movies. Then he staggered forward and fell down smack dack in the middle of roaring traffic. Luckily all the cars managed to swerve around him, and soon a big bus stopped right before him shielding him from all other traffic. People came running and one man cradled his head. It took almost ten minutes for the boy to slowly come out of his seizure, and he was very very confused about all the fuzz around him and he was extremely tired. Traffic was at a complete standstill all this time. Everyone waited quietly and patiently. Police had arrived and ambulance was on its way. It was nice to see everything and everyone coming together to bring this situation to a good end, but still. Nasty disease. In prison, that must be a terrible place to have a seizure.
Hello,
I just spent the last 15 minutes reading your posts, needless to say I was kind of fascinated by it all. This is my first time replying to one of these and I’m not sure if they really go through to you.
I guess I should ask a question in hopes of a response? I’ll try to think of one that’s not too heavy... got it! Favorite sports team? I’m mostly into football and I’m a Carolina girl so Panthers 100% for me!
Hope to hear from you soon
G