I Owe a Truth for Jaime Shirley 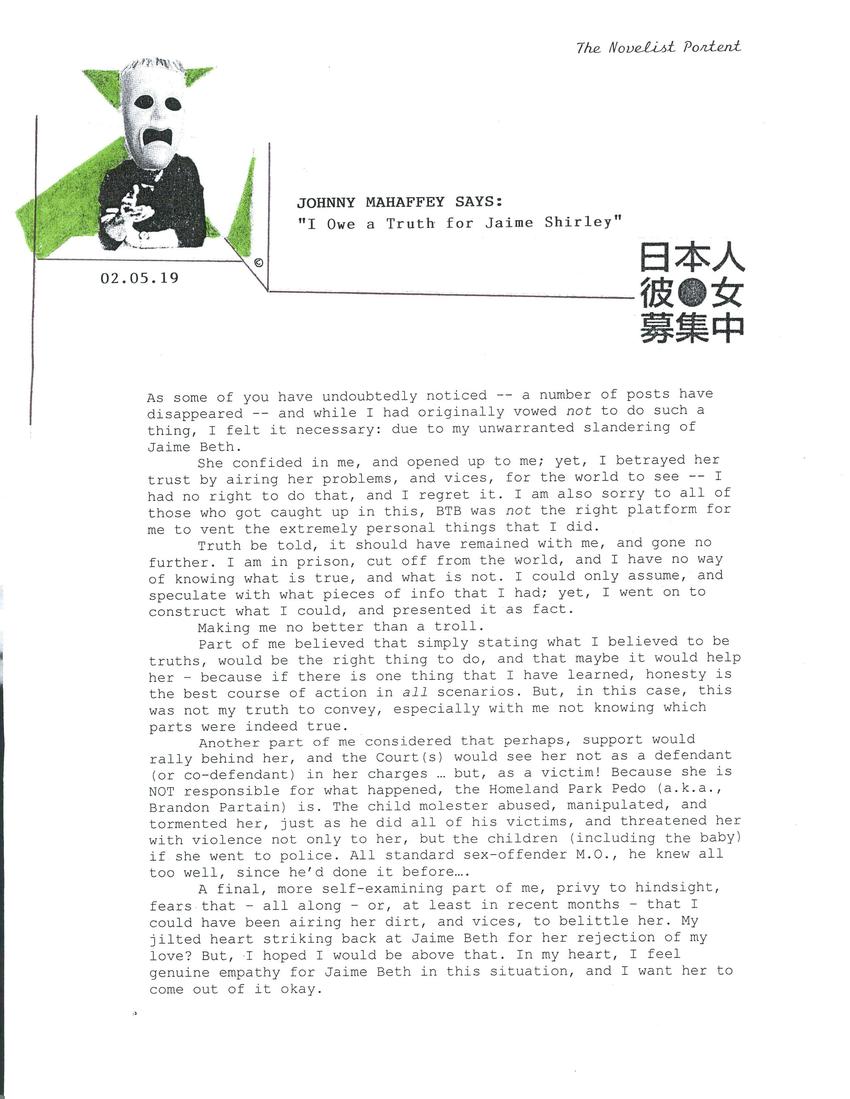 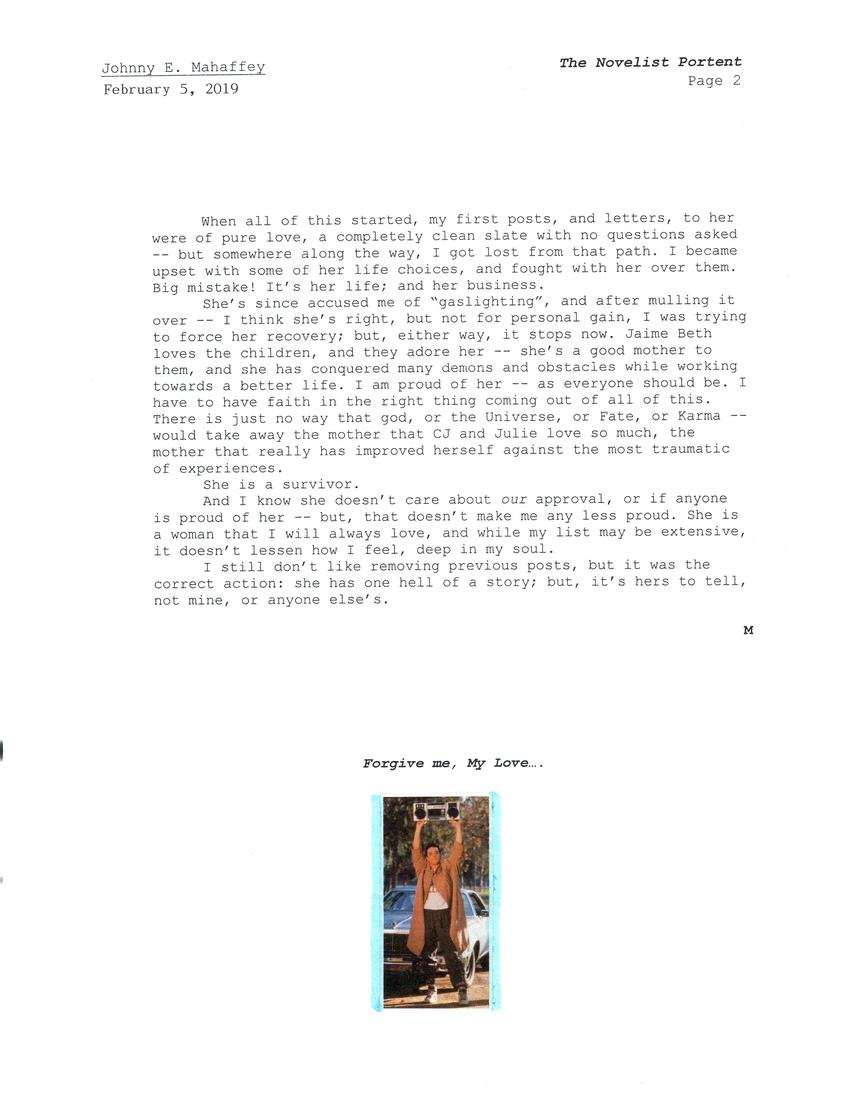 JOHNNY MAHAFFEY SAYS:
"I Owe a Truth for Jaime Shirley"

As some of you have undoubtedly noticed -- a number of posts have disappeared -- and while I had originally vowed not to do such a thing, I felt it necessary; due to my unwarranted slandering of Jaime Beth.
She confided in me, and opened up to me; yet, I betrayed her trust by airing her problems, and vices, for the world to see -- I had no right to do that, and I regret it. I am also sorry to all of those who got caught up in this, BTB was not the right platform for me to vent the extremely personal things that I did.
Truth be told, it should have remained with me, and gone no further. I am in prison, cut off from the world, and I have no way of knowing what is true, and what is not. I could only assume, and speculate with what pieces of info that I had; yet, I went on to construct what I could, and presented it as fact.
Making me no better than a troll.
Part of me believed that simply stating what I believed to be truths, would be the right thing to do, and that maybe it would help her - because if there is one thing that I have learned, honesty is the best course of action in all scenarios. But, in this case, this was not my truth to convey, especially with me not knowing which parts were indeed true.
Another part of me considered that perhaps, support would rally behind her, and the Court(s) would see her not as a defendant (or co-defendant) in her charges … but, as a victim! Because she is NOT responsible for what happened, the Homeland Park Pedo (a.k.a., Brandon Partain) is. The child molester abused, manipulated, and tormented her, just as he did all of his victims, and threatened her with violence not only to her, but the children (including the baby) if she went to the police. All standard sex-offender M.O., he knew all too well, since he'd done it before….
A final, more self-examining part of me, privy to hindsight, fears that - all along - or, at least in recent months - that I could have been airing her dirt, and vices, to belittle her. My jilted heart striking back at Jaime Beth for her rejection of my love? But, I hoped I would be above that. In my heart, I feel genuine empathy for Jaime Beth in this situation, and I want her to come out of it okay.

When all of this started, my first posts, and letters, to her were of pure love, a completely clean slate with no questions asked -- but somewhere along the way, I got lost from that path. I became upset with some of her life choices, and fought with her over them. Big mistake! It's her life; and her business.
She's since accused me of "gaslighting", and after mulling it over -- I think she's right, but not for personal gain, I was trying to force her recovery; but, either way, it stops now. Jaime Beth loves the children, and they adore her -- she's a good mother to them, and she has conquered many demons and obstacles while working towards a better life. I am proud of her -- as everyone should be. I have to have faith in the right thing coming out of all of this. There is just no way that god, or the Universe, or Fate, or Karma -- would take away the mother that CJ and Julie love so much, the mother that really has improved herself against the most traumatic of experiences.
She is a survivor.
And I know she doesn't care about our approval, or if anyone is proud of her -- but, that doesn't make me any less proud. She is a woman that I will always love, and while my list may be extensive, it doesn't lessen how I feel, deep in my soul.
I still don't like removing previous posts, but it was the correct action: she has one hell of a story; but, it's hers to tell, not mine, or anyone else's.

Forgive me, My Love….