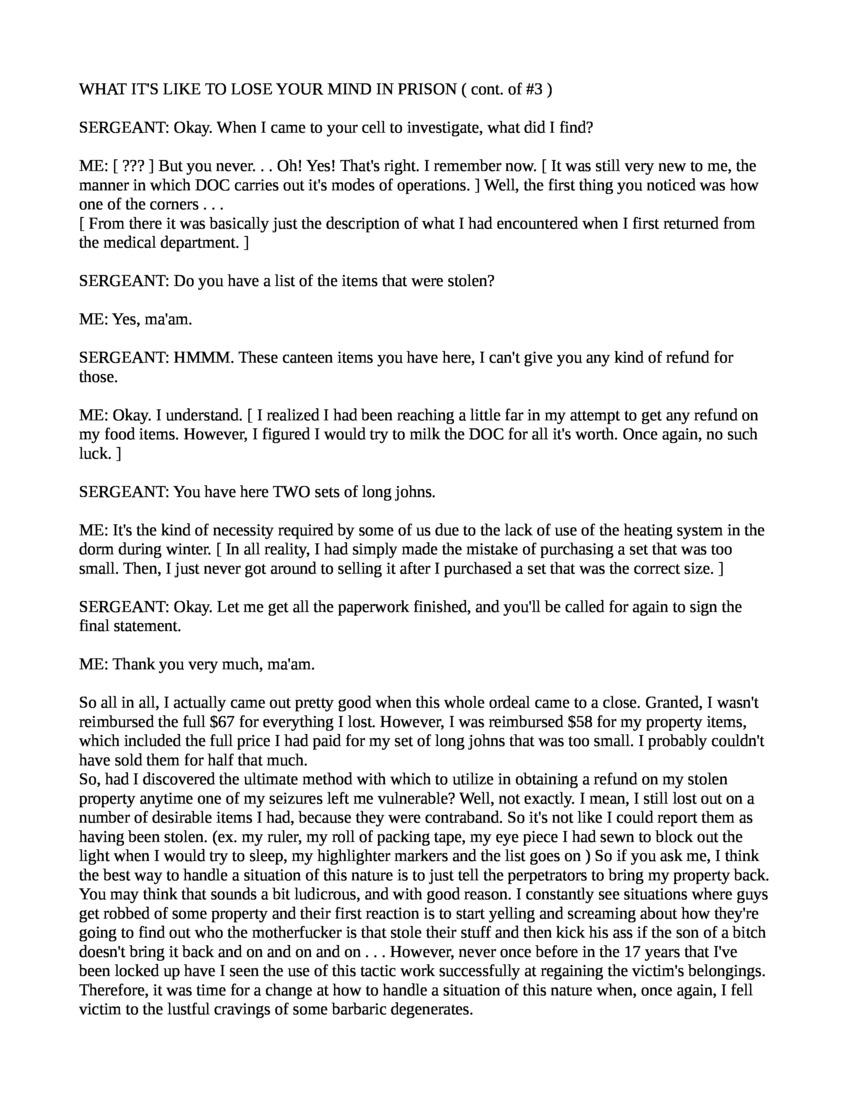 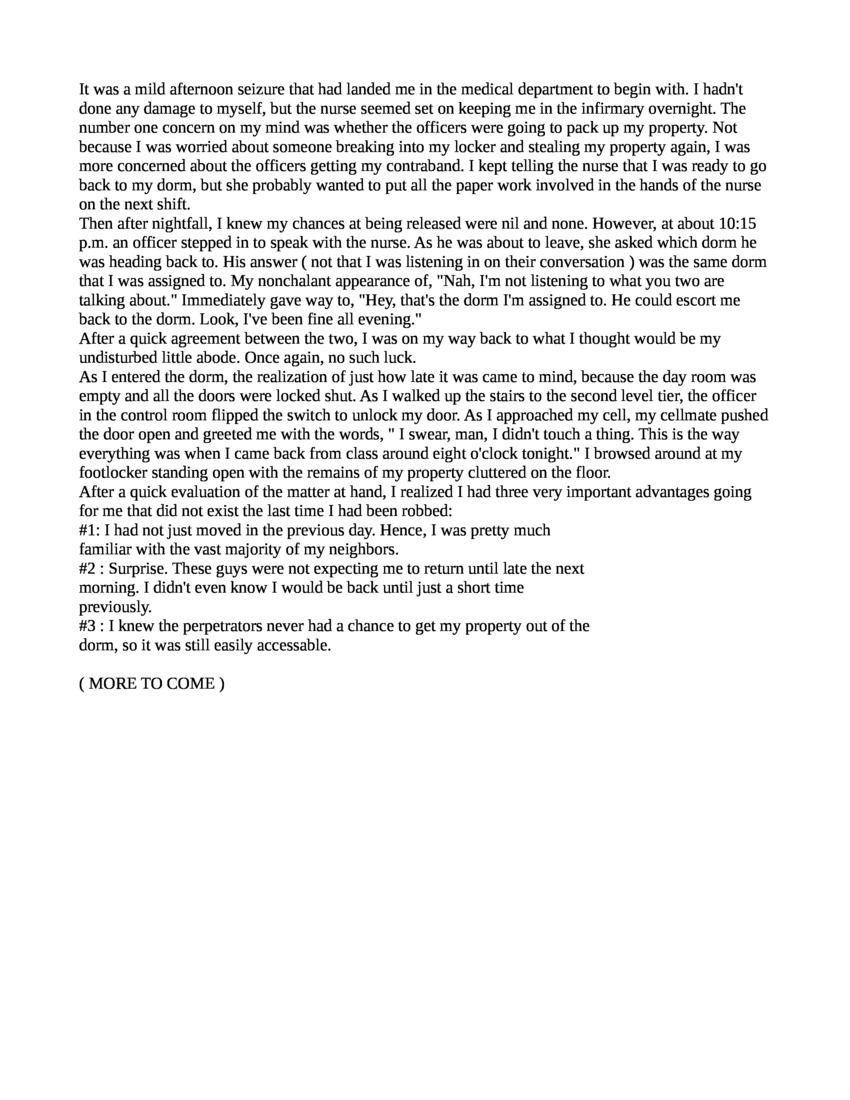 Sergeant: Okay. When I came to your cell to investigate, what did I find?
Me: ? But you never... Oh, yes! That's right. I remember now. [It was still very new to me, the manner in which DOC caries out its modes of operations.] Well, the first thing you noticed was how one of the corners...

From there, it was basically just the description of what I had encountered when I first returned from the medical department.

Sergeant: Do you have a list of the items that were stolen?
Me: Yes ma'am.
Sergeant: Hmm, these canteen items you have here. I can't give you any kind of refund for those.
Me: Okay, I understand.

I realized I had been reaching a little far in my attempt to get any refund on my food items. However, I figured I would try to milk the DOC for all it's worth. Once again, no such luck.

Sergeant: You have TWO sets of long johns.
Me: It's kind of a necessity required by some of us due to the lack of the heating system use in the dorm during winter.

In all reality, I had simply made the mistake of purchasing a set that was too small. Then I just never got around to selling it after I purchased a set that was the correct size.

Sergeant: Okay. Let me get all the paperwork finished, and you'll be called again to sign the final statement.
Me: Thank you very much, ma'am.

So all in all, I actually came out pretty good when this whole ordeal came to a close. Granted, I wasn't reimbursed the full $67 for everything I lost. However, I was reimbursed $58 for my property items, which included the full price I had paid for my set of long johns that was too small. I probably couldn't have sold them for half that much.

So had I discovered the ultimate method with which to utilize in obtaining a refund on my stolen property any time one of my seizures left me vulnerable? Well, not exactly. I mean, I still lost out on a number of desirable items I had because they were contraband. So it's not like I could report them as having been stolen (like my ruler, my roll of packing tape, my eye piece I had sewn to block out the light when I would try to sleep, my highlighter markers, and the list goes on). So if you ask me, I think the best way to handle a situation of this nature is to just tell the perpetrators to bring my property back.

You may think this sounds a bit ludicrous, and with good reason. I constantly see situations where guys get robbed of some property, and their reaction is to start yelling and screaming about how they're going to find out who the motherfucker is that stole their stuff and then kick his ass if the son of a bitch doesn't bring it back, and on and on and on... However, never once in the 17 years that I've been locked up have I seen the use of this tactic work successfully at regaining the victim's belongings. There it was time to change how to handle a situation of this nature when, once again, I fell victim to the lustful cravings of some barbaric degenerates.

It was a mild afternoon seizure that had landed me in the medical department to being with. I hadn't done any damage to myself, but the nurse seemed set on keeping me in the infirmary overnight.

The number one concern on my mind was whether the officers were going to pack up my property. Not because I was worried about someone breaking into my locker and stealing my property again. I was more concerned about the officers getting my contraband. I kept telling the nurse that I was ready to go back to my dorm, but she probably wanted to put all the paperwork involved in the hands of the nurse for the next shift.

After nightfall, I knew my chances of being released were nil and none. However, at about 10:15 PM, an officer stepped in to speak with the nurse. As he was about to leave, she asked which dorm he was heading back to. His answer (not that I was listening to his conversation) was the same dorm I was assigned to. My nonchalant appearance of, "Nah, I'm not listening to what you two are talking about," immediately gave way to, "Hey, that's the dorm I'm assigned to. He could escort me back to the dorm. Look, I've been fine all evening."

After a quick agreement between them, I was on my way back to what I thought would be my undisturbed little adobe. Once again, no such luck.

As I entered the dorm, the realization of just how late it was came to mind because the day room was empty, and all the doors were locked shut. As I walked up the stairs to the second level, the officer in the control room flipped the switch to unlock my door. As I approached my cell, my cellmate pushed the door open and greeted me with the words, "I swear, man, I didn't touch a thing. This is the way everything was when I came back from class around eight o'clock tonight."

I browsed around at my footlocker standing open with the remains of my property cluttered on the floor. After a quick evaluation of the matter at hand, I realized I had three very important advantages going for me that did not exist the last time I had been robbed.

1. I had not just moved in the previous day. Hence, I was pretty much familiar with the vast majority of my neighbors.
2. Surprise. These guys were not expecting me to return until late the next morning. I didn't even know I would be back until just a short time previously.
3. I knew the perpetrators never had a chance to get my property out of the dorm, so it was still easily accessible.