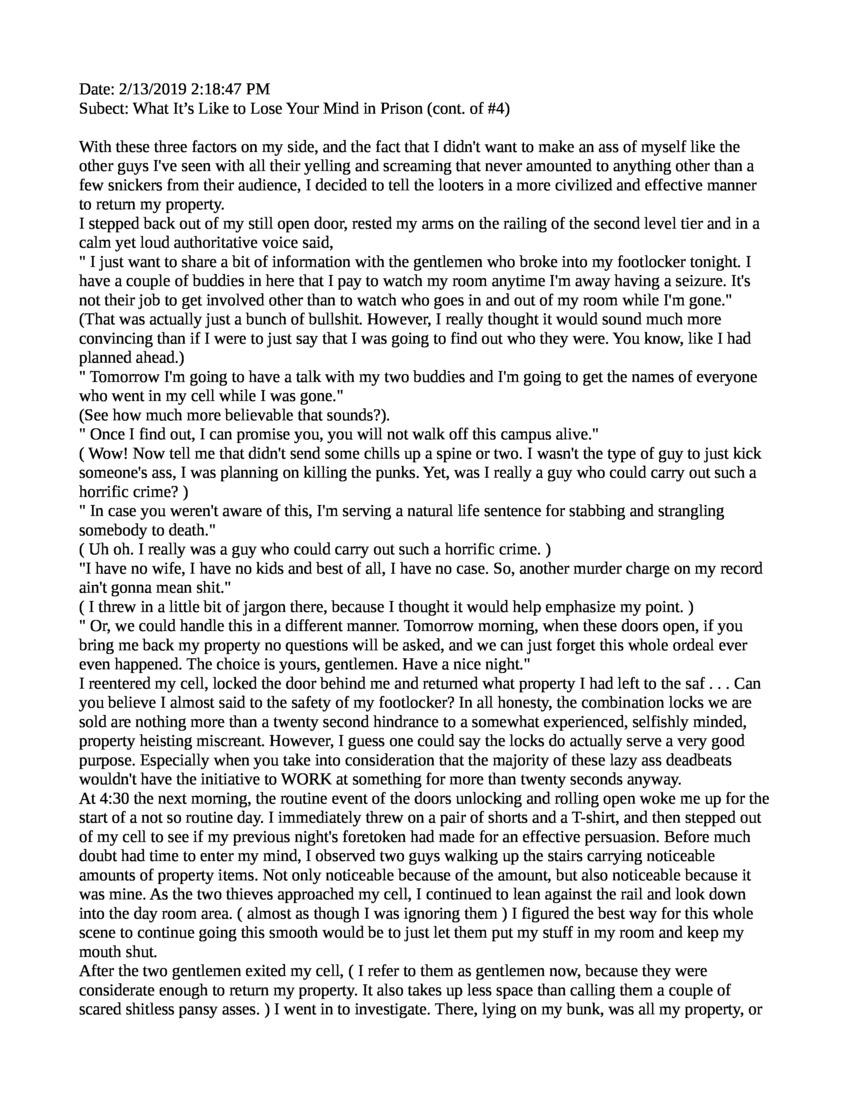 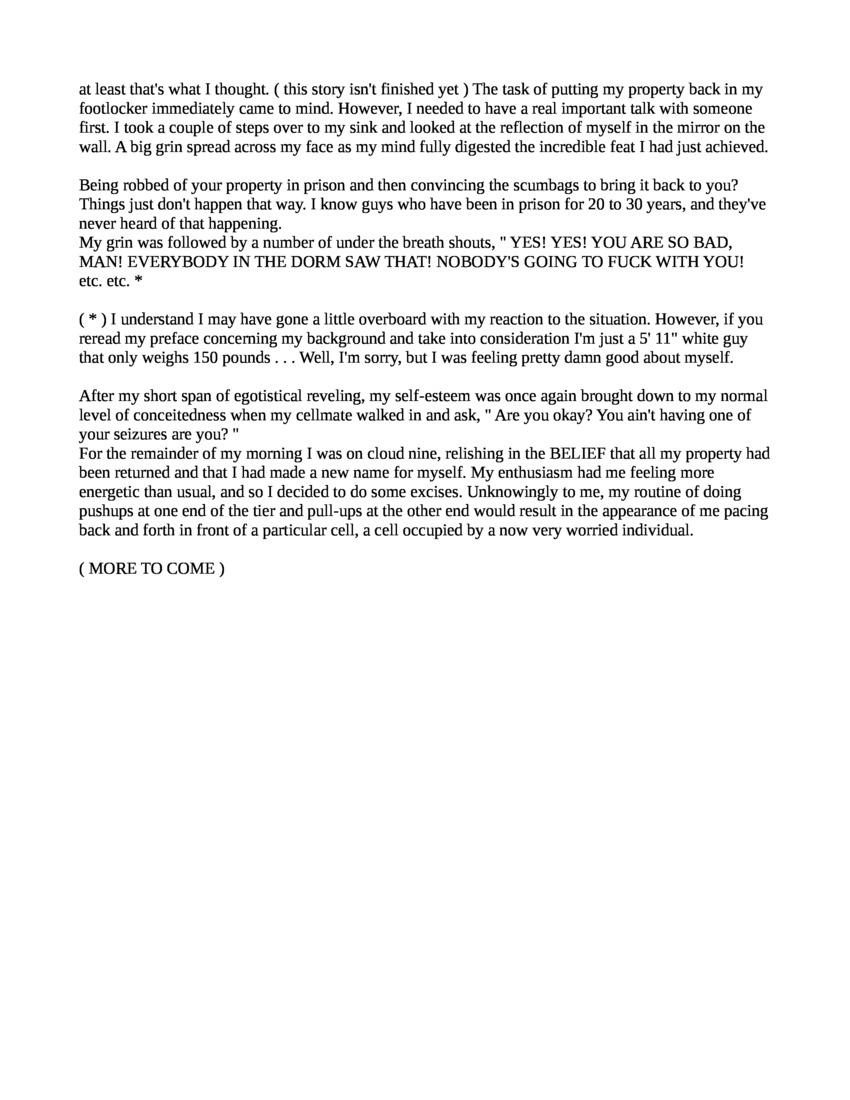 With these three factors on my side, and the fact that I didn't want to make an ass of myself like the other guys I've seen with all their yelling and screaming that never amounted to anything other than a few snickers from their audience, I decided to tell the looters in a more civilized and effective manner to return my property.

I stepped back out of my still open door, rested my arms on the railing of the second level tier and in a calm yet loud authoritative voice said, "I just want to share a bit of information with the gentlemen who broke into my footlocker tonight. I have a couple of buddies in here that I pay to watch my room anytime I'm away having a seizure. It's not their job to get involved other than to watch who goes in and out of my room while I'm gone."

(That was actually just a bunch of bullshit. However, I really thought it would sound much more convincing than if I were to just say that I was going to find out who they were. You know, like I had planned ahead.)

"Tomorrow I'm going to have a talk with my two buddies and I'm going to get the names of everyone who went in my cell while I was gone."

(See how much more believable that sounds?)

"Once I find out, I can promise you, you will not walk off this campus alive."

(Wow! Now tell me that didn't send some chills up a spine or two. I wasn't the type of guy to just kick someone's ass, I was planning on killing the punks. Yet, was I really a guy who could carry out such a horrific crime?)

"In case you weren't aware of this, I'm serving a natural life sentence for stabbing and strangling somebody to death."

(Uh oh. I really was a guy who could carry out such a horrific crime.)

"I have no wife, I have no kids and best of all, I have no case. So, another murder charge on my record ain't gonna mean shit."

(I threw in a little bit of jargon there, because I thought it would help emphasize my point.)

"Or, we could handle this in a different manner. Tomorrow morning, when these doors open, if you bring me back my property no questions will be asked, and we can just forget this whole ordeal ever even happened. The choice is yours, gentlemen. Have a nice night."

I reentered my cell, locked the door behind me and returned what property I had left to the saf... Can you believe I almost said to the safety of my footlocker? In all honesty, the combination locks we are sold are nothing more than a twenty second hindrance to a somewhat experienced, selfishly minded, property heisting miscreant. However, I guess one could say the locks do actually serve a very good purpose. Especially when you take into consideration that the majority of these lazy ass deadbeats wouldn't have the initiative to WORK at something for more than twenty seconds anyway.

At 4:30 the next morning, the routine event of the doors unlocking and rolling open woke me up for the start of a not so routine day. I immediately threw on a pair of shorts and a T-shirt, and then stepped out of my cell to see if my previous night's foretoken had made for an effective persuasion. Before much doubt had time to enter my mind, I observed two guys walking up the stairs carrying noticeable amounts of property items. Not only noticeable because of the amount, but also noticeable because it was mine. As the two thieves approached my cell, I continued to lean against the rail and look down into the day room area. (almost as though I was ignoring them) I figured the best way for this whole scene to continue going this smooth would be to just let them put my stuff in my room and keep my mouth shut.

After the two gentlemen exited my cell, (I refer to them as gentlemen now, because they were considerate enough to return my property. It also takes up less space than calling them a couple of scared shitless pansy asses.) I went in to investigate. There, lying on my bunk, was all my property, or at least that's what I thought. (this story isn't finished yet) The task of putting my property back in my footlocker immediately came to mind. However, I needed to have a real important talk with someone first. I took a couple of steps over to my sink and looked at the reflection of myself in the mirror on the wall. A big grin spread across my face as my mind fully digested the incredible feat I had just achieved.

Being robbed of your property in prison and then convincing the scumbags to bring it back to you? Things just don't happen that way. I know guys who have been in prison for 20 to 30 years, and they've never heard of that happening.

My grin was followed by a number of under the breath shouts, "YES! YES! YOU ARE SO BAD, MAN! EVERYBODY IN THE DORM SAW THAT! NOBODY'S GOING TO FUCK WITH YOU! etc. etc.*

(*) I understand I may have gone a little overboard with my reaction to the situation. However, if you reread my preface concerning my background and take into consideration I'm just a 5' 11" white guy that only weighs 150 pounds... Well, I'm sorry, but I was feeling pretty damn good about myself.

After my short span of egotistical reveling, my self-esteem was once again brought down to my normal level of conceitedness when my cellmate walked in and ask, "Are you okay? You ain't having one of your seizures are you?"

For the remainder of my morning I was on cloud nine, relishing in the BELIEF that all my property had been returned and that I had made a new name for myself. My enthusiasm had me feeling more energetic than usual, and so I decided to do some excises. Unknowingly to me, my routine of doing pushups at one end of the tier and pull-ups at the other end would result in the appearance of me pacing back and forth in front of a particular cell, a cell occupied by a now very worried individual.