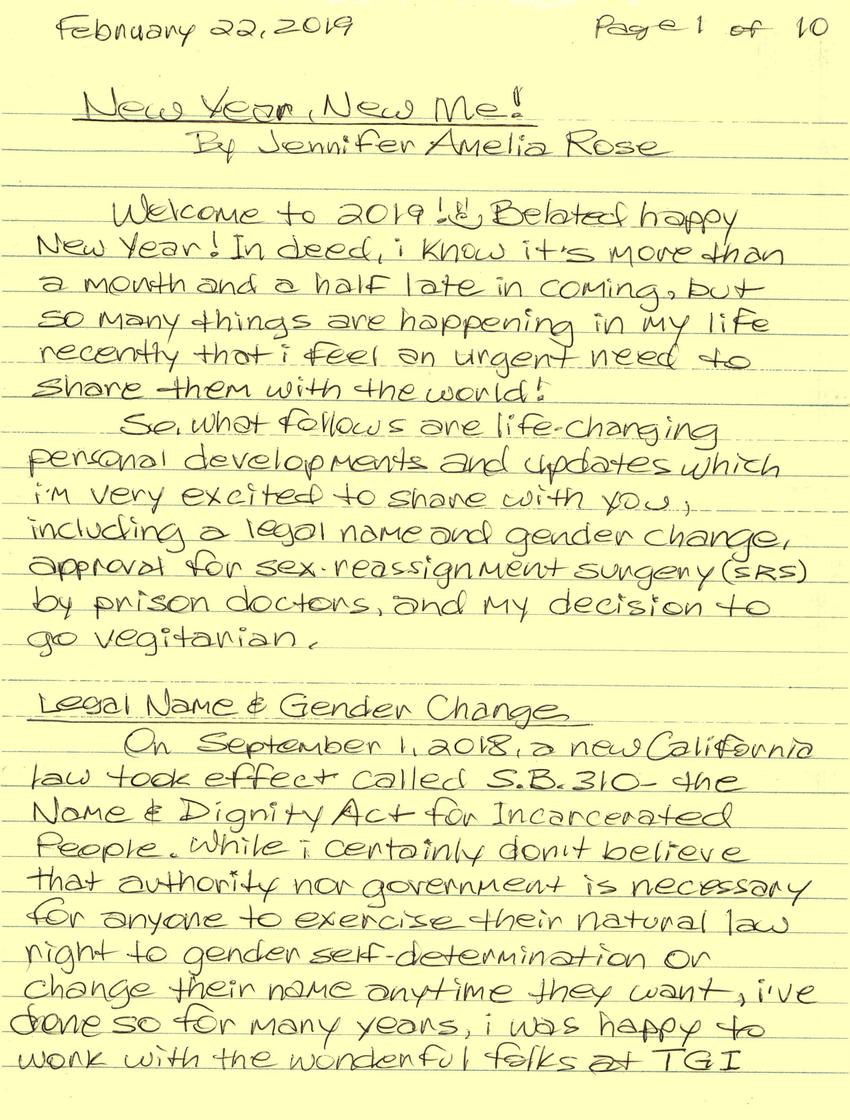 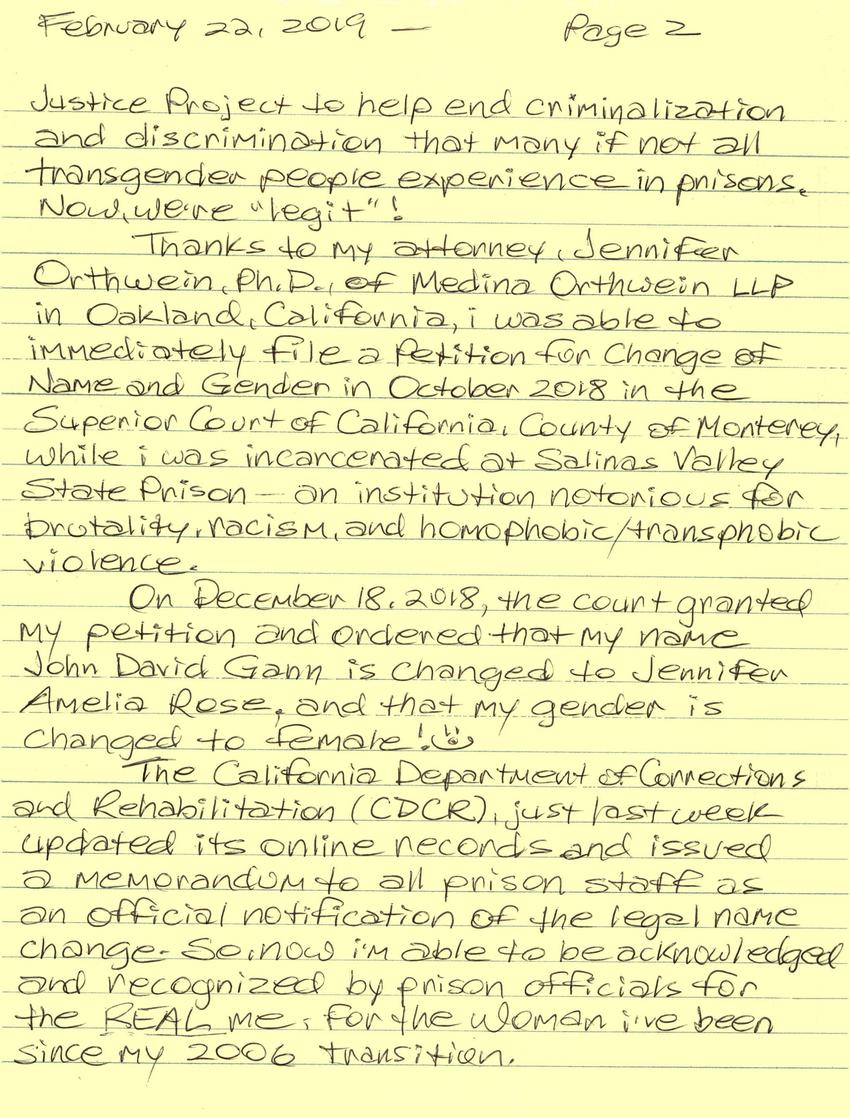 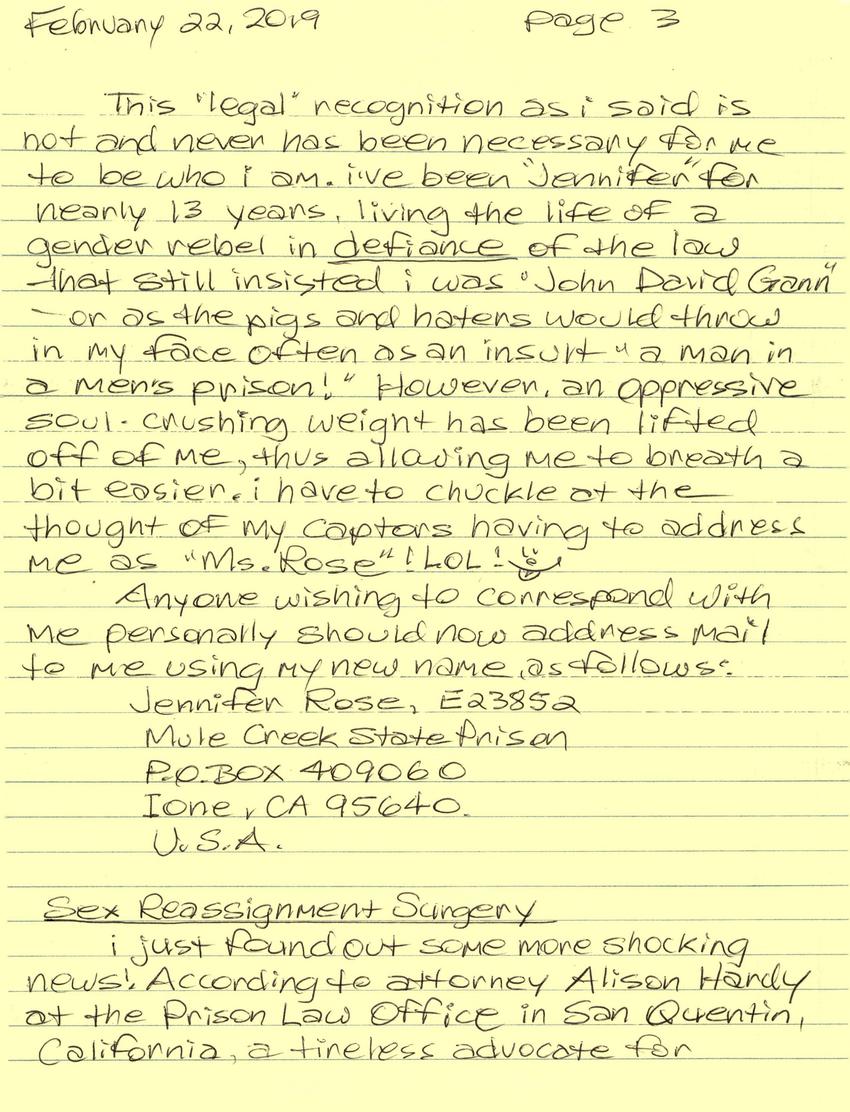 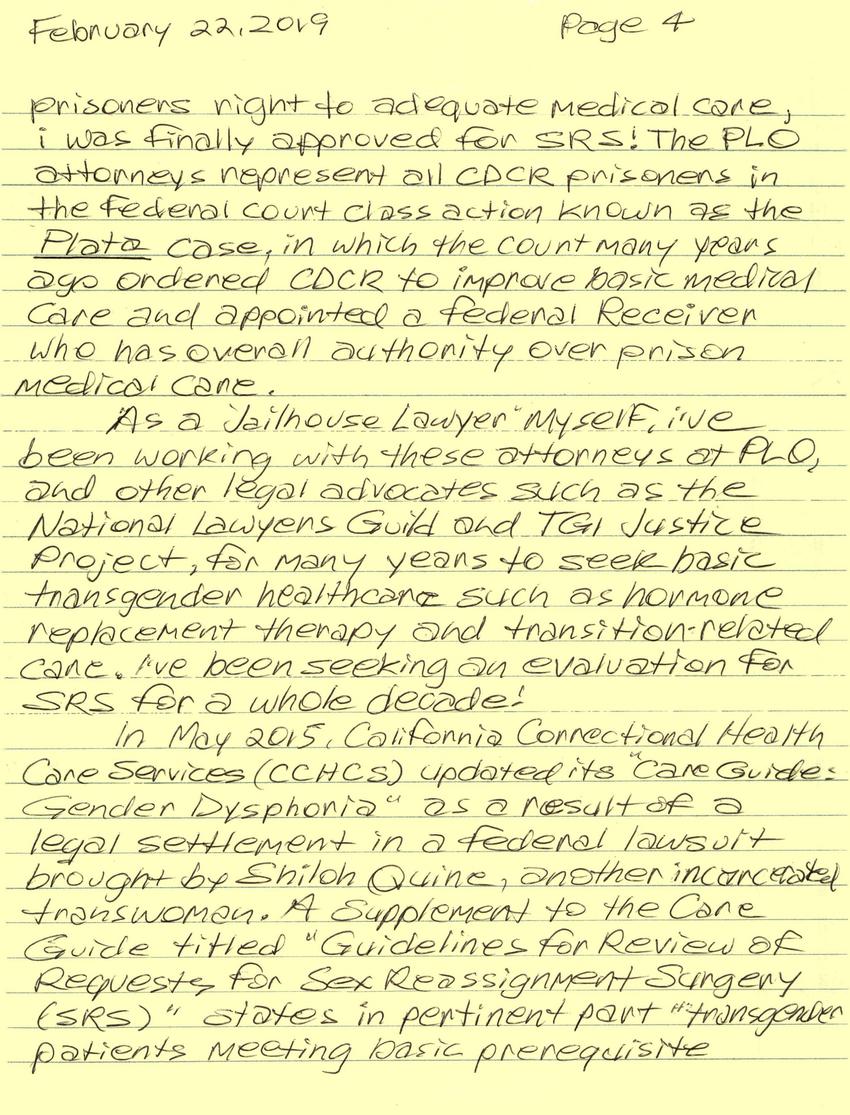 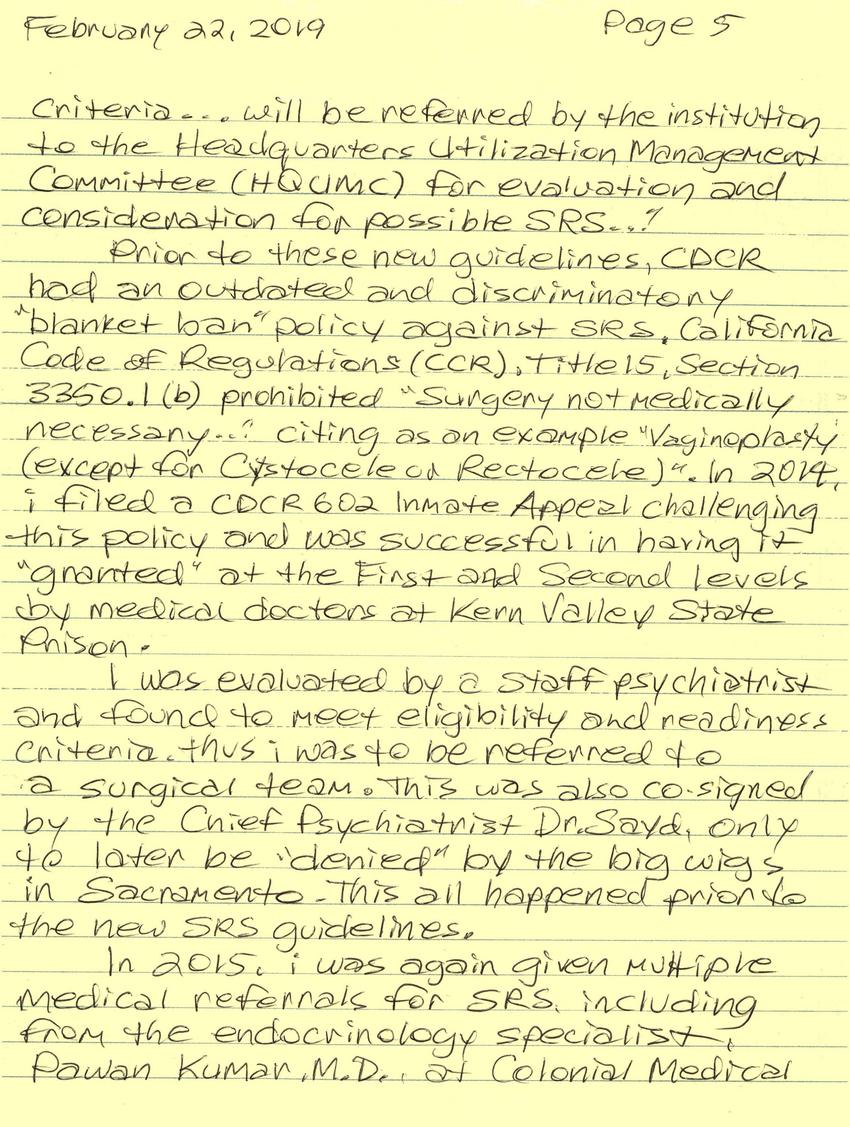 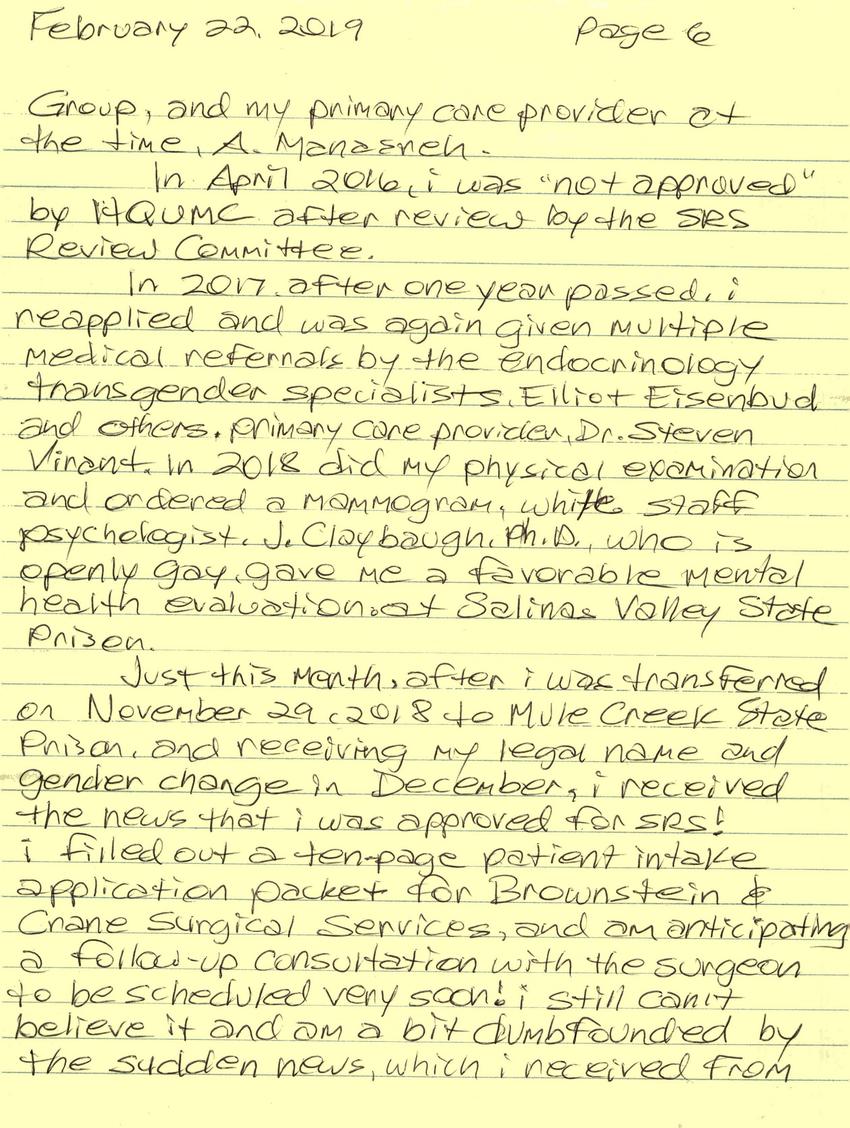 Welcome to 2019! :) Belated Happy New Year! Indeed, I know it's more than a month and a half late in coming, but so many things are happening in my life recently that I fell an urgent need to share them with the world!

So what follows are life-changing personal developments and updates which I'm very excited to share with you, including a legal name and gender change, approval for a sex reassignment surgery (SRS) by prison doctors, and my decision to go vegetarian.

Legal Name and Gender Change:
On September 1, 2018, a new California law took effect called SB 310, the Name and Dignity Act for Incarcerated People. While I certainly don't believe that authority nor government are necessary for anyone to exercise their natural and lawful right to gender self-determination or change their name at any time they want, I've done so for so many years. I was happy to work with the wonderful folks at TGI Justice Program to help end criminalization and discrimination that many if not all transgender people experience in prisons. Now we're "legit!"

Thanks to my attorney, Jennifer Orthwein, PhD, of Medina Orthwein LLP in Oakland, California, I was able to immediately file a petition for a change in name and gender in October 2018 in the Superior Court of California, County of Monterey while I was incarcerated at Salinas Valley State Prison, an institution notorious for brutality, racism, and homophobic and transphobic violence.

On December 18, 2018, the court granted my petition and ordered that my name (John David Gann) be changed to Jennifer Amelia Rose. My gender is now female! :)

The California Department of Corrections and Rehabilitation (CDCR) just last week updated its online records and issued a memorandum to all prison staff of the official notification of the legal name change. So now I'm able to be acknowledged and recognized by prison officials for the REAL me, for the woman I've been since my 2006 transition.

The "legal" recognition, as I said, is not and never has been necessary for me to be who I am. I've been Jennifer for nearly 13 years, living the life of gender rebel in defiance of the law that still insisted I was John David Gann—or as the pigs and haters insult to my face, "a man in a men's prison!" An oppressive soul-crushing weight has been lifted from me, thus allowing me to breathe a bit easier. I have to chuckle at the thought of my captors having to address me as Ms. Rose! LOL! :P

Anyone wishing to correspond with me personally should now address mail to me using my new name, as follows:

Sex Reassignment Surgery:
I just found out some more shocking news! According to attorney Alison Hardly at the prison law office in San Quentin, California, who is a tireless advocate for prisoners' rights to adequate medical care, I was finally approved for SRS! The PLO attorneys represent all CDCR prisoners in the federal court class action known as the Plato Case, in which the court—many years ago—ordered CDCR to improve basic medical care and appointed a federal receiver who has overall authority over prison medical care.

As a jailhouse lawyer myself, I've been working with these attorneys at PLO and other legal advocates, such as the National Lawyers Guild and TGI Justice Project, for many years to seek basic transgender health care such as hormone replacement therapy and transition related care. I've been seeking an evaluation for SRS for a whole decade!

In May 2015, California Correctional Health Care Services (CCHCS) updated its "Care Guide: Gender Dysphoria" as a result of a legal settlement in a federal lawsuit brought by Shiloh Quine, another incarcerated transwoman. A supplement to the Care Guide, "Guidelines for Review and Requests for Sex Reassignment Surgery (SRS)" states in pertinent part:

"Transgender patients meeting basic prerequisite criteria... will be referred by the institution to the Headquarters Utilization Management Committee (HQUMC) for evaluation and consideration for possible SRS..."

Prior to these new guidelines, CDCR had an outdated and discriminatory "blanket ban" policy against SRS. California Code of Regulations (CCR), Title 15, Section 3350 1(b) prohibited "surgery not medically necessary...," citing as an example "vaginoplasty (except for cystocele or rectocele)." In 2014, I filed a CDCR 602 inmate appeal challenging this policy and was successful in having in granted at the first and second levels by medical doctors at Kern Valley State Prison.

I was evaluated by a staff psychiatrist and found to meet eligibility and readiness criteria. Thus I was to be referred to a surgical team. This was also co-signed by the Chief Psychiatist Dr. Sayd, only to be later denied by the big wigs in Sacramento. This all happened prior to the new SRS guidelines.

In 2015, I was again given multiples medical referrals for SRS, including from the endocinology specialist Pawan Kumar, M.D. at Colonial Medical Group, and my primary provide at the time, A. Manasreh.

In April 2016, I was not approved by HQUMC after review by the SRS Review Committee.

In 2017, after one year passed, I reapplied and was again given multiple medical referrals by the endocrinology transgender specialists—Elliot Eisenbud and others— and my primary care provider, Dr. Steven Virant. In 2018 I did my physical examination and ordered a mammogram. White staff psychologist, J. Claybaugh, PhD, who is openly gay, gave me a favorable mental health evaluation at Salinas Valley State Prison.

Just this month, after I was transferred on November 29, 2018, to Mule Creek State Prison and received my legal name and gender change in December, I received the news that I was approved for SRS! I filled out a ten-page patient intake application packet for Brownstein and Crane Surgical Services and am anticipating a follow-up consultation with the surgeon to be scheduled very soon!

I still can't believe it and I'm a bit dumbfounded by the sudden news, which I received from an attorney and was never officially notified by the doctors at my prison or by HQUMC. I'm a bit nervous and apprehensive about going through with the surgery, but I have decided long ago to do it. Of more concern is that I may face even worse transphobic violence and adversity in a women's facility, which I cannot even fathom! The reason for this well-founded safety concern is I've heard unconfirmed reports that Shiloh Quine was repeatedly attacked and stabbed upon her arrival in the women's facility! SMH!

I'm reaching out to the California Coalition for Women Prisoners in an effort to open a dialogue on these issues.

Going Vegetarian!
Today I'm making a conscious decision to switch to a vegetarian diet. This was due to being influenced by some of my anarchist comrades who are either vegetarian or vegan, such as Marius Mason and Michael Kimble.

It will not be the first time I went vegetarian, as I previously did this for about a year while I was studying and practicing bakhti yoga with the Hare Krishnas.

Reading the Vegetarian Starter Guide, published by Mercy For Animals, I can see many good reasons to go vegetarian such as protesting animal cruelty and saving the environment. Also, I want to eat healthy so I can have more energy, live longer, and lower my risk of chronic disease.

Chicken, dairy, and eggs are packed with saturated fat that can lead to heart disease. Eggs have also been shown to increase the risk of diabetes and heart attacks. Both chicken and fish have high levels of cancer causing chemicals like dioxin, arsenic, and mercury.

"Quite simply, the more you substitute plant food for animal foods, the healthier you are likely to be," says Dr. T. Colin Campell, nutrition expert at Cornell University.

Studies now show people who are vegetarian or vegan weigh up to 10% less than people who eat meat, dairy, and eggs, and have been found to significantly reduce their risk of developing diabetes. A recent study found that ditching meat cuts your changes of being hospitalized by or dying from heart disease by 32%!

Going vegetarian is also a powerful way to change the course of history and help halt climate change! By ditching meat, we can help prevent global warming, rain forest destruction, and reduce pollution while saving water and other precious resources.

According to the United Nations Food and Agriculture Organization, animal agriculture now accounts for 18% of global greenhouse gas emissions, more than all of the cars, buses, ships, and planes in the world combined!

So going vegetarian is actually a form of direct action resistance against capitalism and techno-industrial destruction of the Earth and animals.