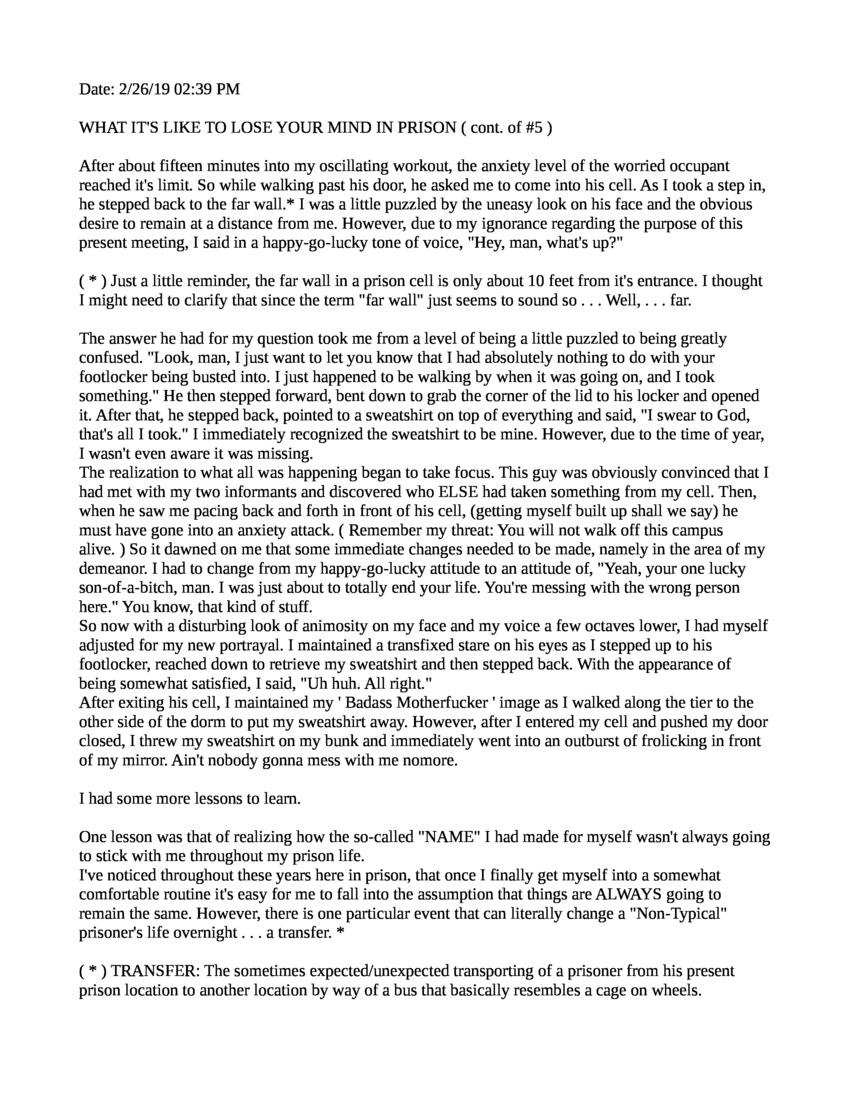 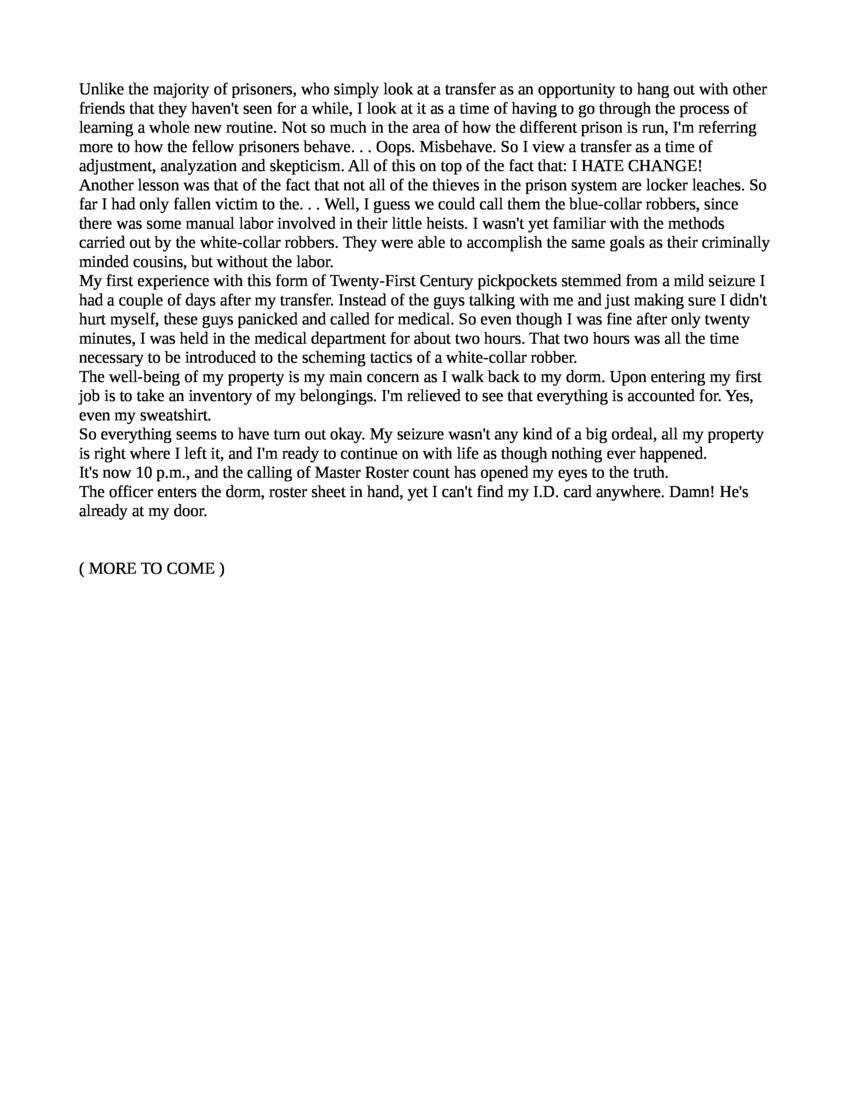 After about fifteen minutes into my oscillating workout, the anxiety level of the worried occupant reached its limit. So while walking past his door, he asked me to come into his cell. As I took a step in, he stepped back to the far wall.*

*Just a little reminder, the far wall in a prison cell is only about 10 feet from its entrance. I thought I might need to clarify that since the term "far wall" just seems to sound so... well, far.

I was a little puzzled by the uneasy look on his face and the obvious desire to remain at a distance from me. However, due to my ignorance regarding the purpose of this present meeting, I said in a happy-go-lucky tone of voice, "Hey, man. What's up?"

The answer he had for my question took me from a level of being a little puzzled to being greatly confused. "Look, man, I just want to let you know that I had absolutely nothing to do with your footlocker being busted into. I just happened to be walking by when it was going on, and I took something." He then stepped forward, bent down to grab the corner of the lid to his locker, and opened it. After that, he stepped back, pointed to a sweat shirt on top of everything and said, "I swear to God that's all I took."

I immediately recognized the sweat shirt to be mine. However, due to the time of year, I wasn't even aware it was missing.

The realization to what all was happening began to take focus. This guy was obviously convinced that I had met with my two informants and discovered who ELSE had taken something from my cell. Then, when he saw me pacing back and forth in front of his cell (getting myself built up, shall we say), he must have gone into an anxiety attack. Remember my threat: You will not walk off this campus alive.

So it dawned on me that some immediate changes needed to be made, namely in the area of my demeanor. I had to change from my happy-go-lucky attitude to "Yeah, you're one lucky son of a bitch, man. I was just about to totally end your life. You're messing with the wrong person here." You know, that kind of stuff.

So now, with a disturbing look of animosity on my face and my voice a few octaves lower, I had myself adjusted for my new portrayal. I maintained a transfixed stare on his eyes and stepped up to his footlocker, reaching down to retrieve my sweatshirt. I stepped back. With the appearance of being somewhat satisfied, I said, "Uh huh. All right."

After exiting his cell, I maintained my badass motherfucker image as I walked along the tier to the other side of the dorm to put my sweat shirt away. However, after I entered my cell and pushed my door closed, I threw my sweat shirt on my bunk and immediately went into an outburst, frolicking in front of my mirror. Ain't nobody gonna mess with me anymore.

I had some lessons to learn.

One lesson was realizing how the so-called NAME I had made for myself wasn't always going to stick with me throughout my prison life.

I've noticed throughout these years that once I finally get myself into a somewhat comfortable routine, it's easy for me to fall into the assumption that things are ALWAYS going to remain the same. However, there is one particular event that can literally change a non-typical prisoner's life overnight: a transfer.*

*Transfer: the sometimes expected/unexpected transporting of a prisoner from his present location to another location by way of a bus that basically resembles a cage on wheels.

Unlike the majority of the prisoners who simply look at a transfer as an opportunity to hang out with other friends they haven't seen in a while, I look at it as a time of having to go through the process of learning a whole new routine. Not so much in the area of how the different prison is run, I'm referring more to how the fellow prisoners behave. Oops. Misbehave. So I view a transfer as a time of adjustment, analyzation, and skepticism. All of this on top of the fact that I HATE CHANGE!

Another lesson was the fact that not all of the thieves in the prison system are locker leeches. So far, I had only fallen victim to the... well, I guess we could call them the blue-collar robbers since there was some manual labor involved in their little heists. I wasn't yet familiar with the methods carried out by the white-collar robbers. They were able to accomplish the same goals as their criminally minded cousins, but without the labor.

My first experience with this form of 21st century pickpockets stemmed from a mild seizure I had a couple of days after my transfer. Instead of the guys talking with me and just making sure I didn't hurt myself, these guys panicked and called for medical. So even though I was fine after only 20 minutes, I was held in the medical department for about two hours. That two hours was all the time necessary to be introduced to the white-collar robber's tactics.

The well-being of my property is my main concern as I walk back to my dorm. Upon entering my first job, inventory of my belongings is my first priority. I'm relieved to see that everything is accounted for. Yes, even my sweat shirt.

So everything seems to have turned out okay. My seizure wasn't any kind of a big ordeal, all my property is right where I left it, and I'm ready to continue on with life as though nothing ever happened.

It's now 10 PM, and the calling of master roster count has opened my eyes to the truth. The officer enters the dorm, roster sheet in hand, yet I can't find my ID card anywhere. Damn! He's already at my door.

Your blog is phenomenal! You immediately grabbed my attention from the very first post, and I've been binge-reading your works since. You are an extraordinary writer and I am super excited for the next continuation.