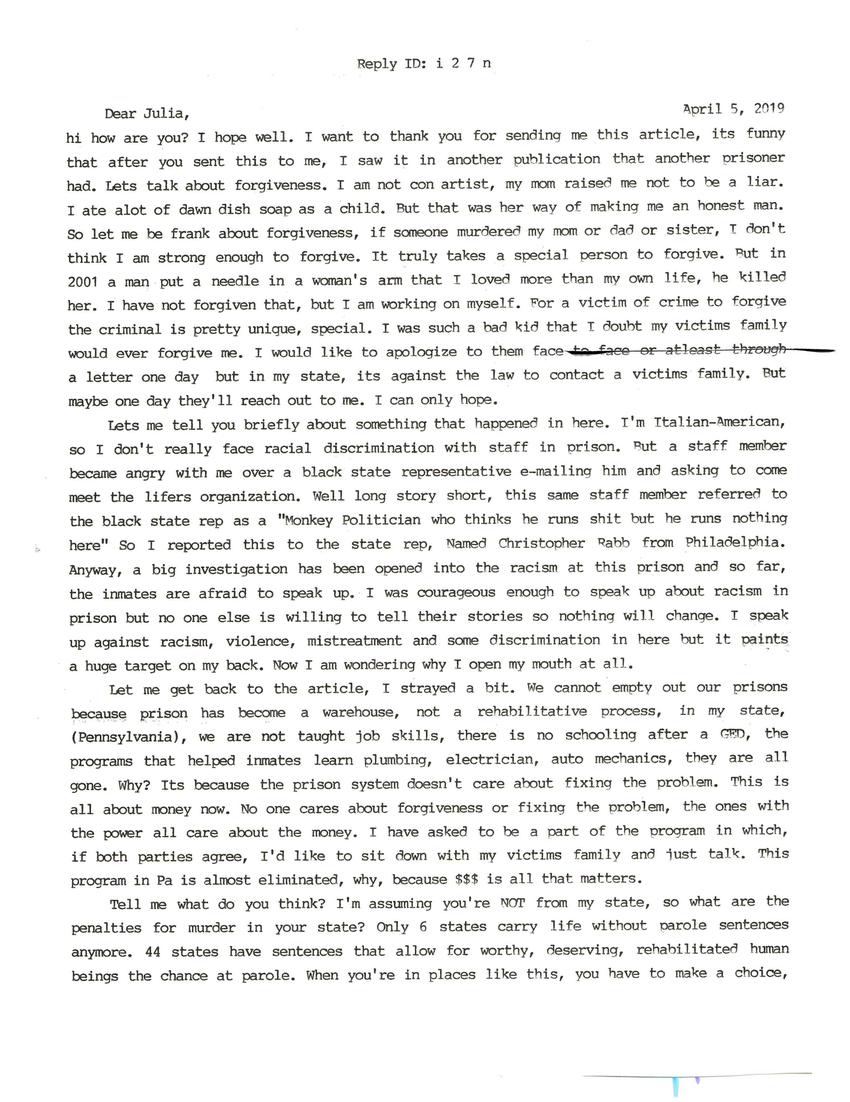 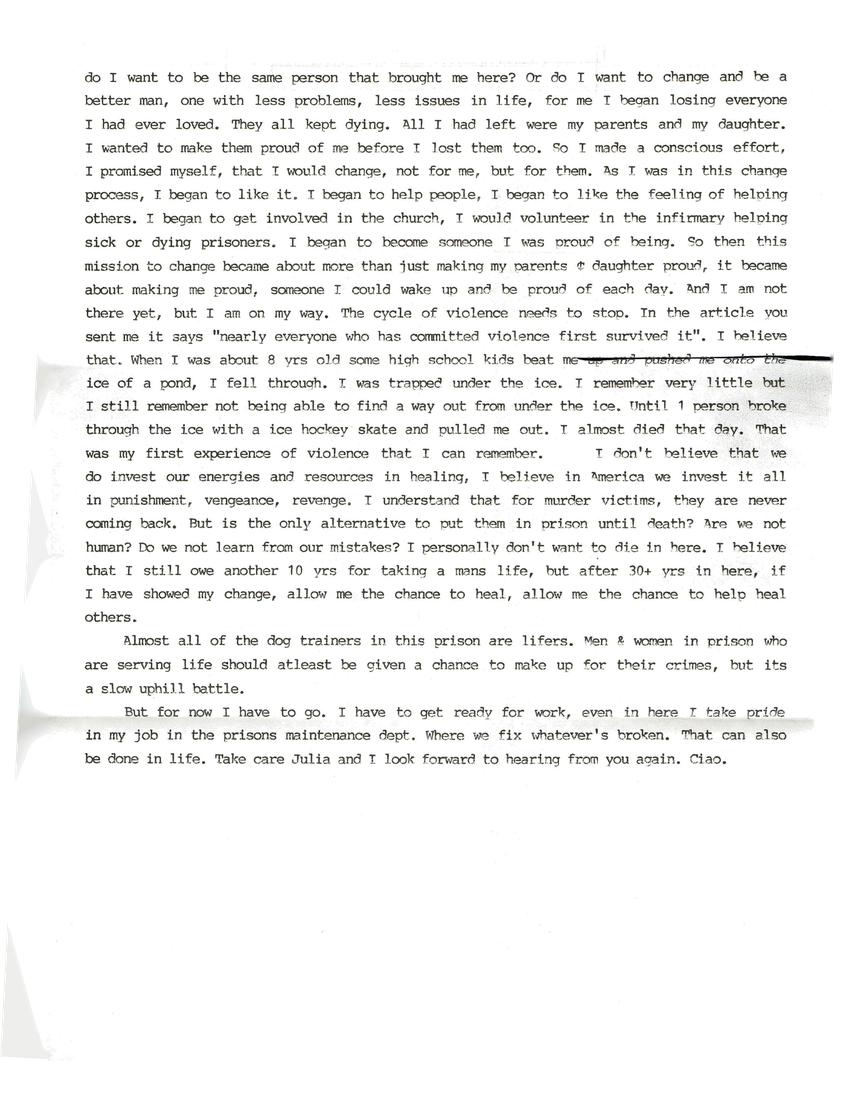 hi how are you? I hope well. I want to thank you for sending me this article, its funny that after you sent this to me, I saw it in another publication that another prisoner had. Lets talk about forgiveness. I am not con artist, my mom raised me not to be a liar. I ate alot of dawn dish soap as a child. But that was her way of making me an honest man. So let me be frank about forgiveness, if someone murdered my mom or dad or sister, I don't think I am strong enough to forgive. It truly takes a special person to forgive. But in 2001 a man put a needle in a woman's arm that I loved more than my own life, he killed her. I have not forgiven that, but I am working on myself. For a victim of crime to forgive the criminal is pretty unique, special. I was such a bad kid that I doubt my victims family would ever forgive me. I would like to apologize to them face to face or atleast through a letter one day but in my state, its against the law to contact a victims family. But maybe one day they'll reach out to me. I can only hope.

Let me tell you briefly about something that happened in here. I'm Italian-American, so I don't really face racial discrimination with staff in prison. But a staff member became angry with me over a black state representative e-mailing him and asking to come meet the lifers organization. Well long story short, this same staff member referred to the black state rep as a "Monkey Politician who thinks he runs shit but he runs nothing here". So I reported this to the state rep, Named Christopher Rabb from Philadelphia. Anyway, a big investigation has been opened into the racism at this prison and so far, the inmates are afraid to speak up. I was courageous enough to speak up about racism in prison but no one else is willing to tell their stories so nothing will change. I speak up against racism, violence, mistreatment and some discrimination in here but it paints a huge target on my back. Now I am wondering why I open my mouth at all.

Let me get back to the article, I strayed a bit. We cannot empty out our prisons because prison has become a warehouse, not a rehabilitative process. In my state, (Pennsylvania), we are not taught job skills, there is no schooling after a GED the programs that helped inmates learn plumbing, electrician, auto mechanics, they are all gone. Why? It's because the prison system doesn't care about fixing the problem. This is all about money now. No one cares about forgiveness or fixing the problem, the ones with the power all care about the money. I have asked to be a part of the program in which, if both parties agree, I'd like to sit down with my victims family and just talk. This program in Pa is almost eliminated, why, because $$$ is all that matters.

Tell me what do you think? I'm assuming you're NOT from my state, so what are the penalties for murder in your state? Only 6 states carry life without parole sentences anymore. 44 states have sentences that allow for worthy, deserving, rehabilitated human beings the chance at parole. When you're in places like this, you have to make a choice, do I want to be the same person that brought me here? Or do I want to change and be a better man, one with less problems, less issues in life, for me I began losing everyone I had ever loved. They all kept dying. All I had left were my parents and my daughter. I wanted to make them proud of me before I lost them too. So I made a conscious effort, I promised myself, that I would change, not for me, but for them. As I was in this change process, I began to like it. I began to help people, I began to like the feeling of helping others. I began to get involved in the church, I would volunteer in the infirmary helping sick or dying prisoners. I began to become someone I was proud of being. So then this mission to change became about more than just making my parents + daughter proud, it became about making me proud, someone I could wake up and be proud of each day. And I am not there yet, but I am on my way. The cycle of violence needs to stop. In the article you sent me it says "nearly everyone who has committed violence first survived it". I believe that. When I was about 8 yrs old some high school kids beat me up and pushed me onto the ice of a pond, I fell through. I was trapped under the ice. I remember very little but I still remember not being able to find a way out from under the ice. Until 1 person broke through the ice with a ice hockey skate and pulled me out. I almost died that day. That was my first experience of violence that I can remember. I don't believe that we do invest our energies and resources in healing, I believe in America we invest it all in punishment, vengeance, revenge. I understand that for murder victims, they are never coming back. But is the only alternative to put them in prison until death? Are we not human? Do we not learn from our mistakes? I personally don't want to die in here. I believe that I still owe another 10 yrs for taking a mans life, but after 30+ yrs in here, if I have showed my change, allow me the chance to heal, allow me the chance to help heal others.

Almost all of the dog trainers in this prison are lifers. Men & women in prison who are serving life should atleast be given a chance to make up for their crimes, but its a slow uphill battle.

But for now I have to go. I have to get ready for work, even in here I take pride in my job in the prisons maintenance dept. Where we fix whatever's broken. That can also be done in life. Take care Julia and I look forward to hearing from you again. Ciao.