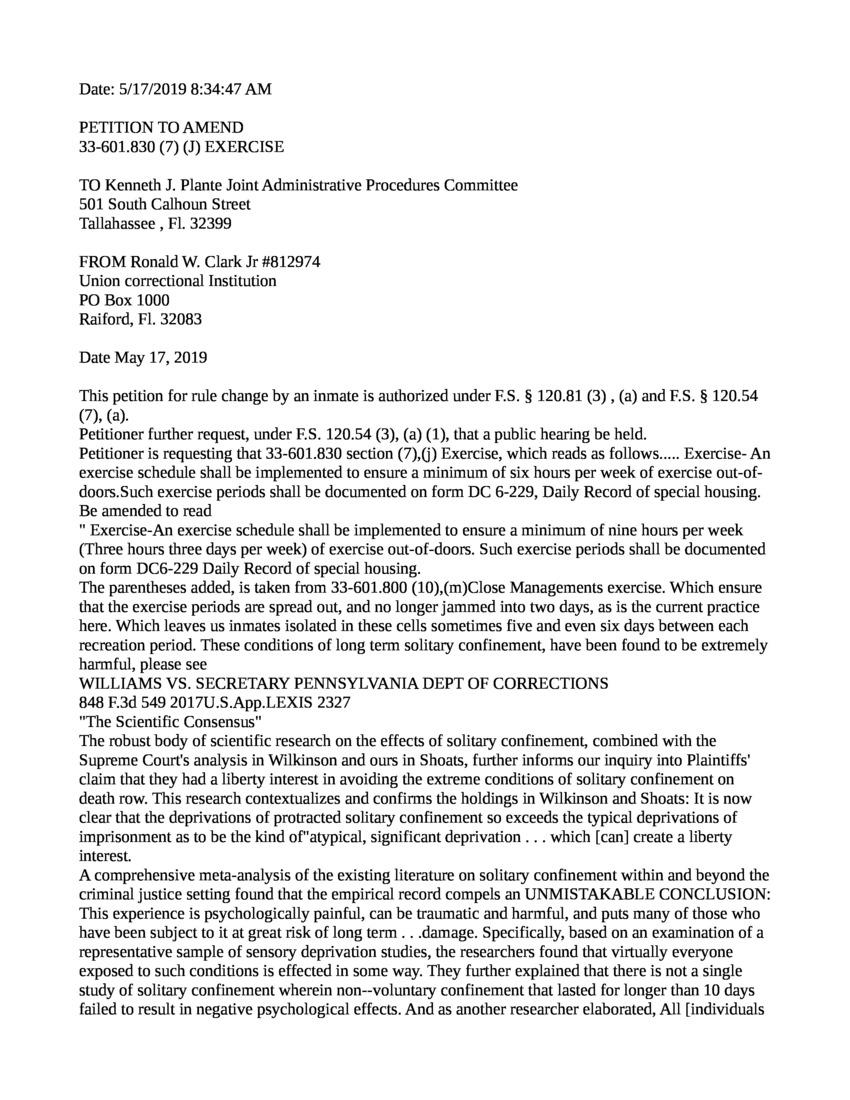 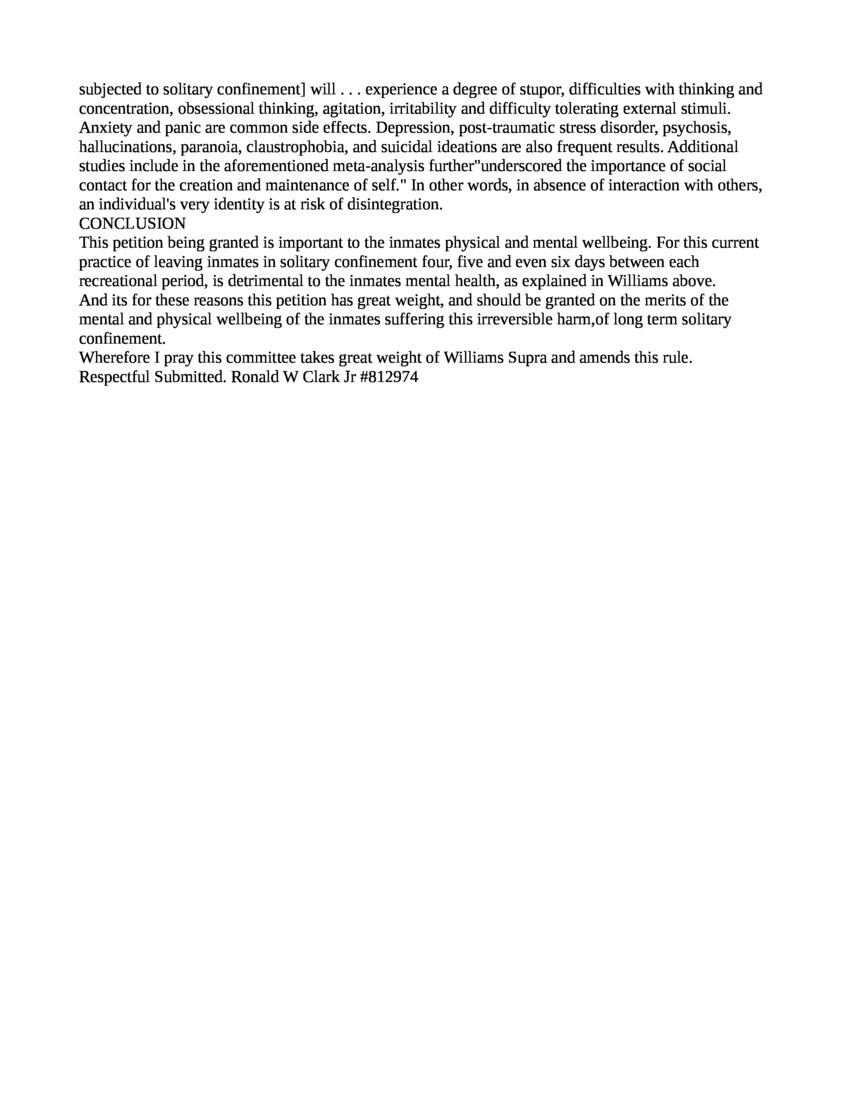 This petition for rule change by an inmate is authorized under F.S. 120.81 (3), (a) and F.S. 120.54 (7), (a).
Petitioner further request, under F.S. 120.54 (3), (a)(1), that a public hearing be held.
Petitioner is requesting that 33-601.830 section (7),(j) Exercise, which reads as follows.... Exercise- An exercise schedule shall be implemented to ensure a minimum of six hours per week of exercise out-of-doors. Such exercise periods shall be documented on form DC 6-229, Daily Record of special housing.
Be amended to read
"Exercise-An exercise schedule shall be implemented to ensure a minimum of nine hours per week (Three hours three days per week) of exercise out-of-doors. Such exercise periods shall be documented on form DC6-229 Daily Record of special housing.
The parentheses added, is taken from 33-601.800 (10),(m)Close Managements exercise. Which ensure that the exercise periods are spread out, and no longer jammed into two days, as is the current practice here. Which leaves us inmates in these cells sometimes five and even six days between each recreation period. These conditions of long term solitary confinement, have been found to be extremely harmful, please see
WILLIAMS VS. SECRETARY PENNSYLVANIA DEPT OF CORRECTIONS
848 F.3d 549 2017U.S.App.LEXIS 2327
"The Scientific Consensus"
The robust body of scientific research on the effects of solitary confinement, combined with the Supreme Court's analysis in Wilkinson and ours in Shoats, further informs our inquiry into Plaintiffs' claim that they had a liberty interest in avoiding the extreme conditions of solitary confinement on death row. This research contextualizes and confirms the holdings in Wilkinson and Shoats: It is now clear that the deprivations of protracted solitary confinement so exceeds the typical deprivations of imprisonment as to be the kind of "atypical, significant deprivation … which [can] create a liberty interest.
A comprehensive meta-analysis of the existing literature on solitary confinement within and beyond the criminal justice setting found that the empirical record compels an UNMISTAKEABLE CONCLUSION: This experience is psychologically painful, can be traumatic and harmful, and puts many of those who have been subject to it at great risk of long term...damage. Specifically, based on an examination of a representative sample of sensory deprivation studies, the researches found that virtually everyone exposed to such conditions is effected in some way. They further explained that there is not a single study of solitary confinement wherein non--voluntary confinement that lasted for longer than 10 days failed to result in negative psychological effects. And as another researched elaborated, All [individuals subjected to solitary confinement] will … experience a degree of stupor, difficulties with thinking and concentration, obsessional thinking, agitation, irritability and difficulty tolerating external stimuli. Anxiety and panic are common side effects. Depression, post-traumatic stress disorder, psychosis, hallucinations, paranoia, claustrophobia, and suicidal ideations are also frequent results. Additional studies include in the aforementioned meta-analysis further "underscored the importance of social contact for the creation and maintenance of self." In other words, in absence of interaction with others, an individual's very identity is at risk of disintegration.
CONCLUSION
This petition being granted is important to the inmates physical and mental wellbeing. For this current practice of leaving inmates in solitary confinement four, five and even six days between each recreational period, is detrimental to the inmates mental health, as explained in Williams above. And its for these reasons this petition has great weight, and should be granted on the merits of the mental and physical wellbeing of the inmates suffering this irreversible harm, of long term solitary confinement.
Wherefore I pray this committee takes great weight of Williams Supra and amends this rule.
Respectful Submitted. Ronald W Clark Jr #812974