One Mind One Goal 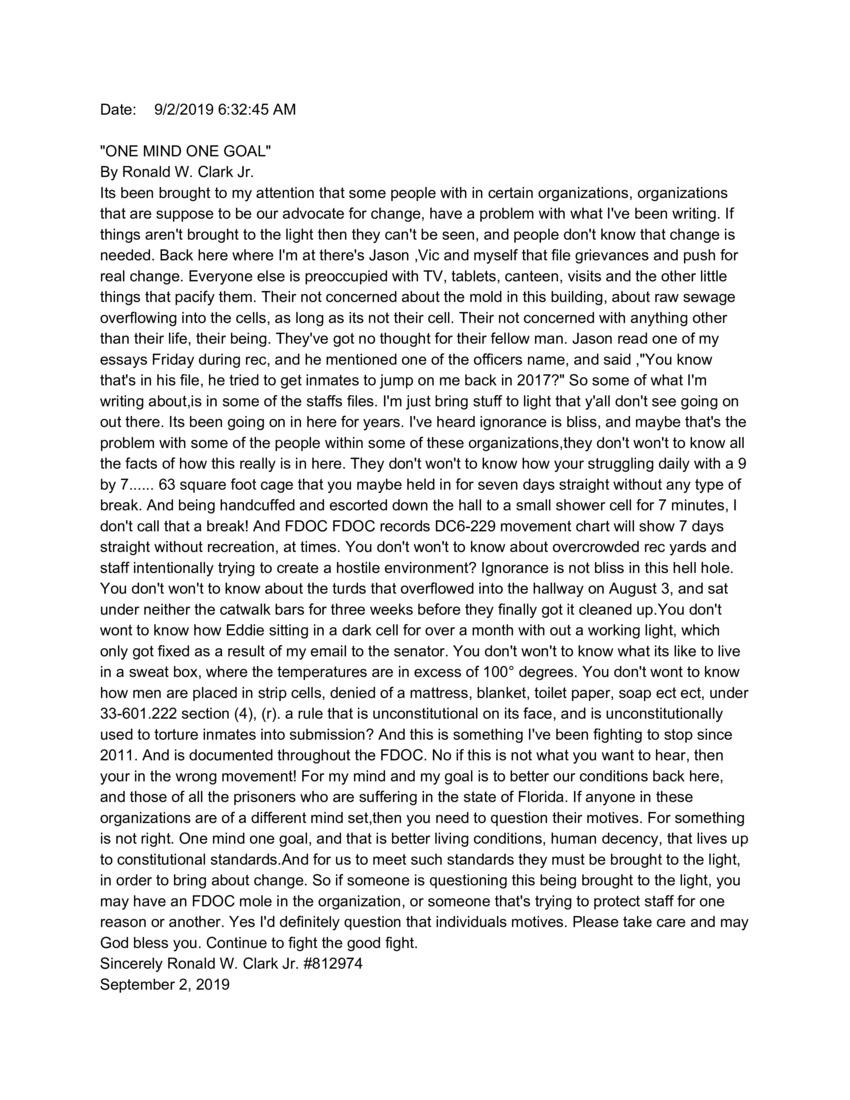 "ONE MIND ONE GOAL"
By Ronald W. Clark Jr.

It's been brought to my attention that some people with in certain organizations, organizations that are supposed to be our advocate for change, have a problem with what I've been writing. If things aren't brought to the light then they can't be seen, and people don't know that change is needed. Back here where I'm at there's Jason, Vic and myself that file grievances and push for real change. Everyone else is preoccupied with TV, tablets, canteen, visits and the other little things that pacify them. They're not concerned about the mold in this building, about raw sewage overflowing into the cells, as long as it's not their cell. They're not concerned with anything other than their life, their being. They've got no thought for their fellow man. Jason read one of my essays Friday during rec, and he mentioned one of the officers' names, and said, "You know that's in his file, he tried to get inmates to jump on me back in 2017?" So some of what I'm writing about is in some of the staff's files. I'm just bringing stuff to light that y'all don't see going on out there. It's been going on in here for years. I've heard ignorance is bliss, and maybe that's the problem with some of the people within some of these organizations, they don't want to know all the facts of how this really is in here. They don't want to know how you're struggling daily with a 9 by 7 ...... 63 square foot cage that you're maybe held in for seven days straight without any type of break. And being handcuffed and escorted down the hall to a small shower cell for 7 minutes, I don't call that a break! And FDOC DC6-229 movement chart will show 7 days straight without recreation, at times. You don't want to know about overcrowded rec yards and staff intentionally trying to create a hostile environment? Ignorance is not bliss in this hell hole. You don't want to know about the turds that overflowed into the hallway on August 3, and sat underneath the catwalk bars for three weeks before they finally got it cleaned up. You don't want to know how Eddie sitting in a dark cell for over a month without a working light, which only got fixed as a result of my email to the senator. You don't want to know what it's like to live in a sweat box, where the temperatures are in excess of 100º degrees. You don't want to know how men are placed in strip cells, denied of a mattress, blanket, toilet paper, soap etc etc, under 33-601 .222 section (4), (r). a rule that is unconstitutional on its face, and is unconstitutionally used to torture inmates into submission? And this is something I've been fighting to stop since 2011. And is documented throughout the FDOC. No if this is not what you want to hear, then you're in the wrong movement! For my mind and my goal is to better our conditions back here, and those of all prisoners who are suffering in the state of Florida. If anyone in these organizations are of a different mindset, then you need to question your motives. For something is not right. One mind one goal, and that is better living conditions, human decency, that lives up to constitutional standards. And for us to meet such standards they must be brought to the light, in order to bring about change. So if someone is questioning this being brought to the light, you may have an FDOC mole in the organization, or someone that's trying to protect staff for one reason or another. Yes, I'd definitely question that individual's motives.

Please take care and may God bless you. Continue to fight the good fight.