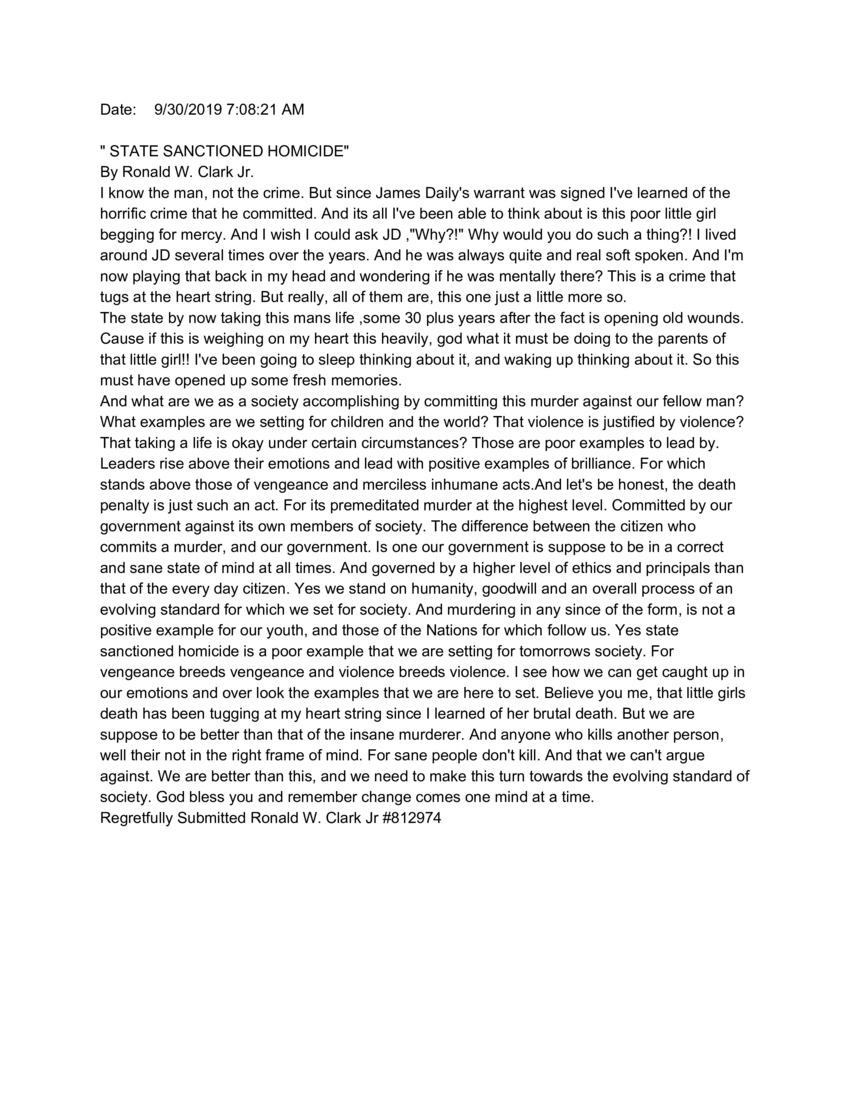 I know the man, not the crime. But since James Daily's warrant was signed, I've learned of the horrific crime that he committed. And it's all I've been able to think about—this poor little girl begging for mercy. And I wish I could ask JR, "Why!? Why would you do such a thing?"

I've lived around JD several times over the years, and he was always quiet and real soft-spoken. And I'm now playing that back in my head and wondering if he was mentally there. This is a crime that tugs at the heartstrings. But really, all of them are, this one just a little more so.

The state, by now, is taking this man's life. Some 30 plus years after the fact, and it's opening old wounds. 'Cause if this is weighing on my heart this heavily, God, what it must be doing to the parents of that little girl! I've been going to sleep thinking about it and waking up thinking about it. So, this must have opened up some fresh memories.

And what are we as a society accomplishing by committing this murder against our fellow man? What examples are we setting for children and the world? That violence is justified by violence? That taking a life is okay under certain circumstances? Those are poor examples to lead by.

Leaders rise above their emotions and lead with positive examples of brilliance. For which stands above those of vengeance and merciless inhumane acts. And let's be honest, the death penalty is just an act. For it's premeditated murder at the highest level, committed by our government against members of its own society.

The difference between the citizen who commits a murder and our government is one, our government is supposed to be in a correct and sane state of mind at all times. And governed by a higher level of ethics and principles than that of everyday citizens. Yes, we stand on humanity, goodwill, and an overall process of an evolving standard for which we set for society. And murdering in any sense of the form is not a positive example for our youth and those of the nations whom follow us.

I can see how we can get caught up in our emotions and overlook the examples that we are here to set. Believe you me, that little girl's death has been tugging at my heartstrings since I learned of her brutal death. But we are supposed to be better than that of an insane murderer. Anyone who kills another person, well, they're not in the right frame of mind. Sane people don't kill. We can't argue against that.

We are better than this, and we need to make this turn towards the evolving standard of society. God bless you, and remember: change comes one mind at a time.