A Change Of course 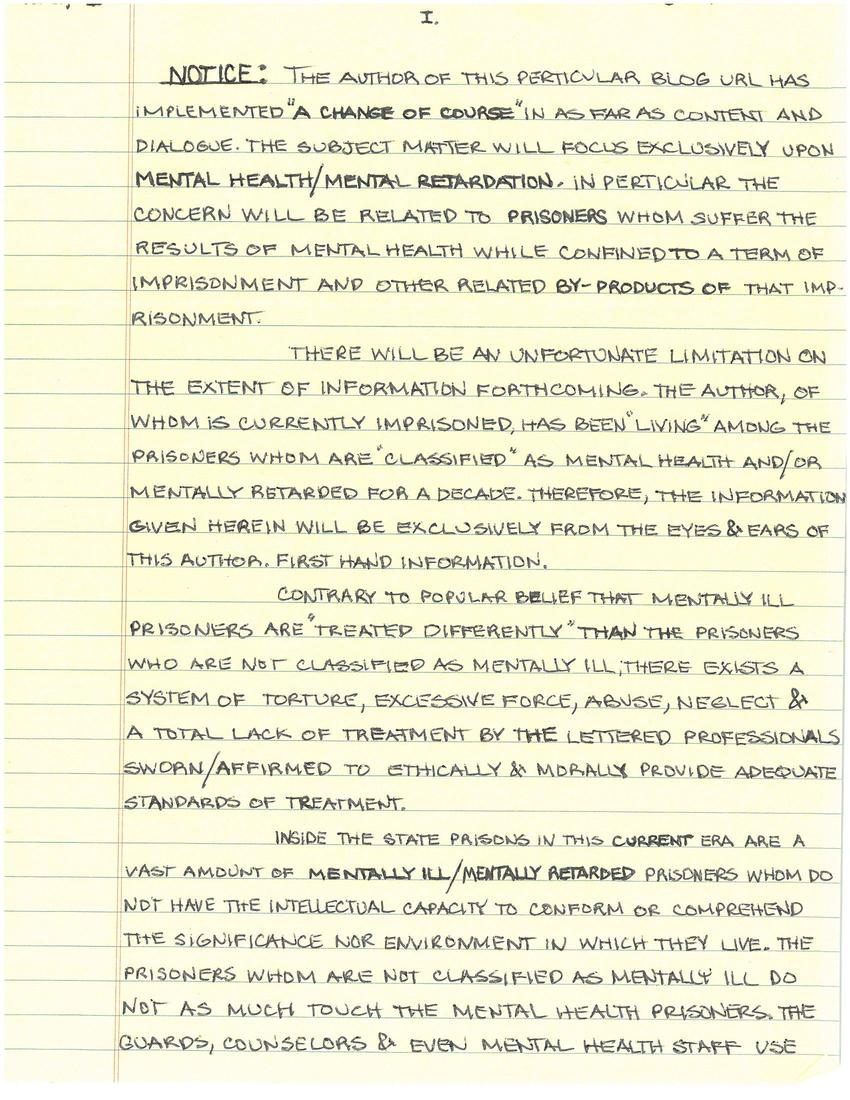 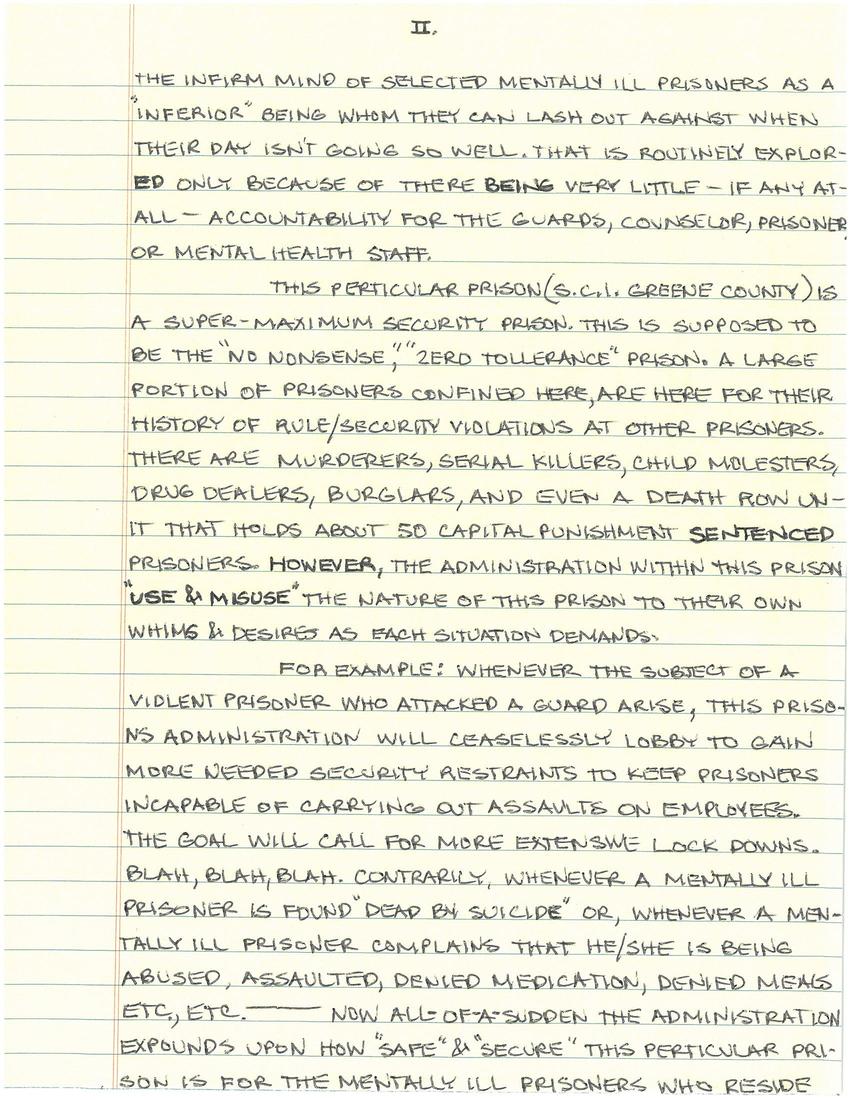 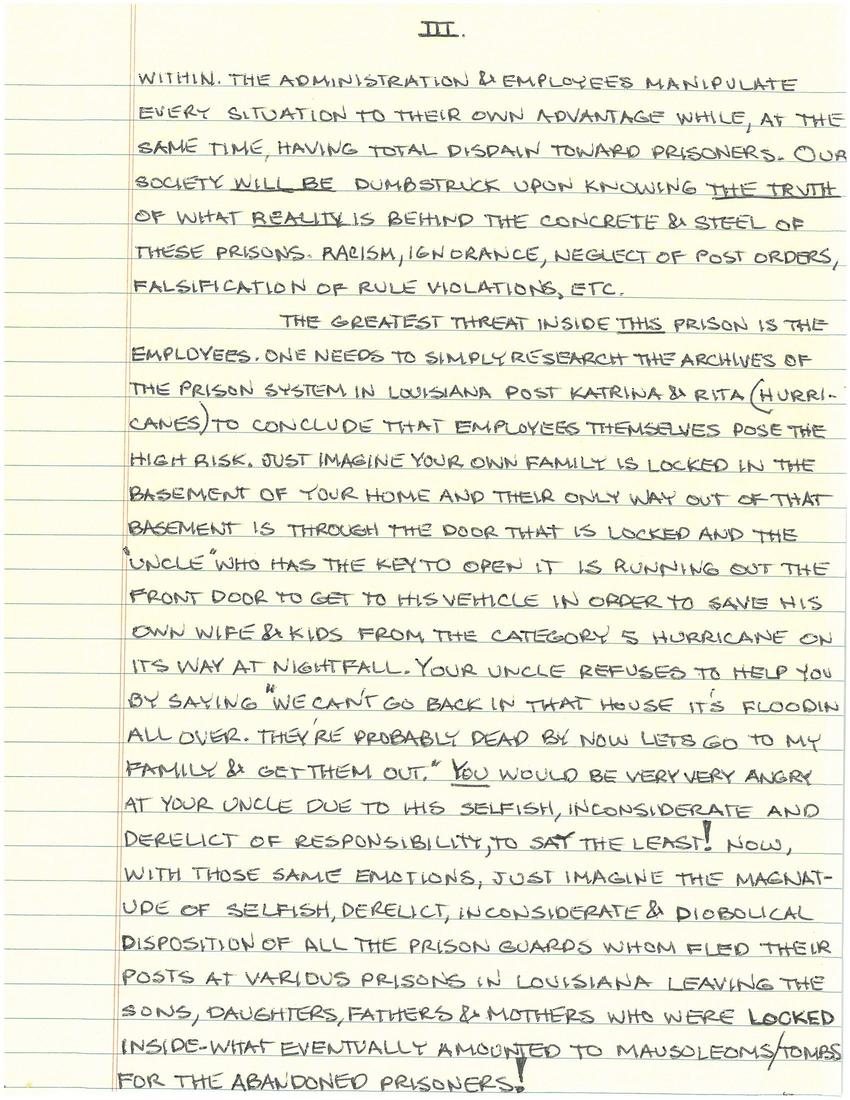 NOTICE: The author of this particular blog has implemented a change of course in as far as content and dialogue. The subject matter will focus exclusively upon mental health and mental retardation, in particular the concern will be related to prisoners whom suffer the results of mental heath while confined to a term of imprisonment and other related by-products of that imprisonment.

There will be an unfortunate limitation on the extent of information forthcoming. The author, of whom is currently imprisoned, has been living among the prisoners whom are classified as mental health and/or mentally retarded for a decade. Therefore, the information given herein will be exclusively from the eyes and ears of this author. Firsthand information.

Contrary to popular belief that mentally ill prisoners are treated differently than the prisoners who are not classified as mentally ill, there exists a system of torture, excessive force, abuse, neglect and a total lack of treatment by the lettered professionals sworn/affirmed to ethically and morally provide adequate standards of treatment.

Inside the state prisons in this current era are a vast amount of mentally ill and mentally retarded prisoners whom do not have the intellectual capacity to conform or comprehend the significance nor environment in which they live. The prisoners whom are not classified as mentally ill do not as much touch the mental health prisoners. The guards, counselors and even mental health staff use the infirm mind of selected mentally ill prisoners as an "inferior being" whom they can lash out against when their day isn't going so well. That is routinely explored only because of there being very little—if any at all—accountability for the guards, counselor, prisoner or mental health staff.

This particular prison (S.C.I. Greene County) is a super maximum security prison. This is supposed to be the "no nonsense," zero tolerance prison. A large portion of prisoners confined here are here for their history of rule and security violations at other prisons. There are murderers, serial killers, child molesters, drug dealers, burglars, and even a death row unit that holds about 50 capital punishment sentenced prisoners. However, the administration within this prison use and misuse the nature of this prison to their own whims and desires as each situation demands.

For example: whenever the subject of a violent prisoner who attacked a guard arises, this prison's administration will ceaselessly lobby to gain more needed security restraints to keep prisoners incapable of carrying out assaults on employees. The goal will call for more extreme lockdowns. Blah, blah, blah. Contrarily, whenever a mentally ill prisoners is found dead by suicide or whenever a mentally ill prisoner complains that he/she is being abused, assaulted, denied medication, denied meals, etc., etc.—now all of a sudden the administration expounds upon how "safe and secure" this particular prison is for the mentally ill prisoners who reside within it.

The administration and employees manipulate every situation to their own advantage while at the same time having total disdain towards prisoners. Our society will be dumbstruck upon knowing the truth of what reality is behind the concrete and steel of these prisons. Racism, ignorance, neglect of post orders, falsification of rule violations, etc.

The greatest threat inside this prison is the employees. One needs to simply research the archives of the prison system in Louisiana post Katrina and Rita (hurricanes) to conclude that employees themselves pose the highest risk. Just imagine your own family is locked in the basement of your home and their only way out of that basement is through the door that is locked, and the uncle who has the key to open it is running out the front door to get to his vehicle in and save his own wife and kids from the category five hurricane on its way at nightfall. Your uncle refuses to help you by saying, "We can't go back in that house. It's flooding all over. They're probably dead by now. Let's go to my family and get them out." You would be very, very angry at your uncle due to his selfish, inconsiderate, and derelict responsibility to say the least!

Now, with those same emotions, just imagine the magnitude of selfish, derelict, inconsiderate and diabolical disposition of all the prison guards whom fled their posts at various prisons in Louisiana, leaving the sons, daughters, fathers, and mothers who were locked inside—what eventually amounted to mausoleums and tombs for the abandoned prisoners!