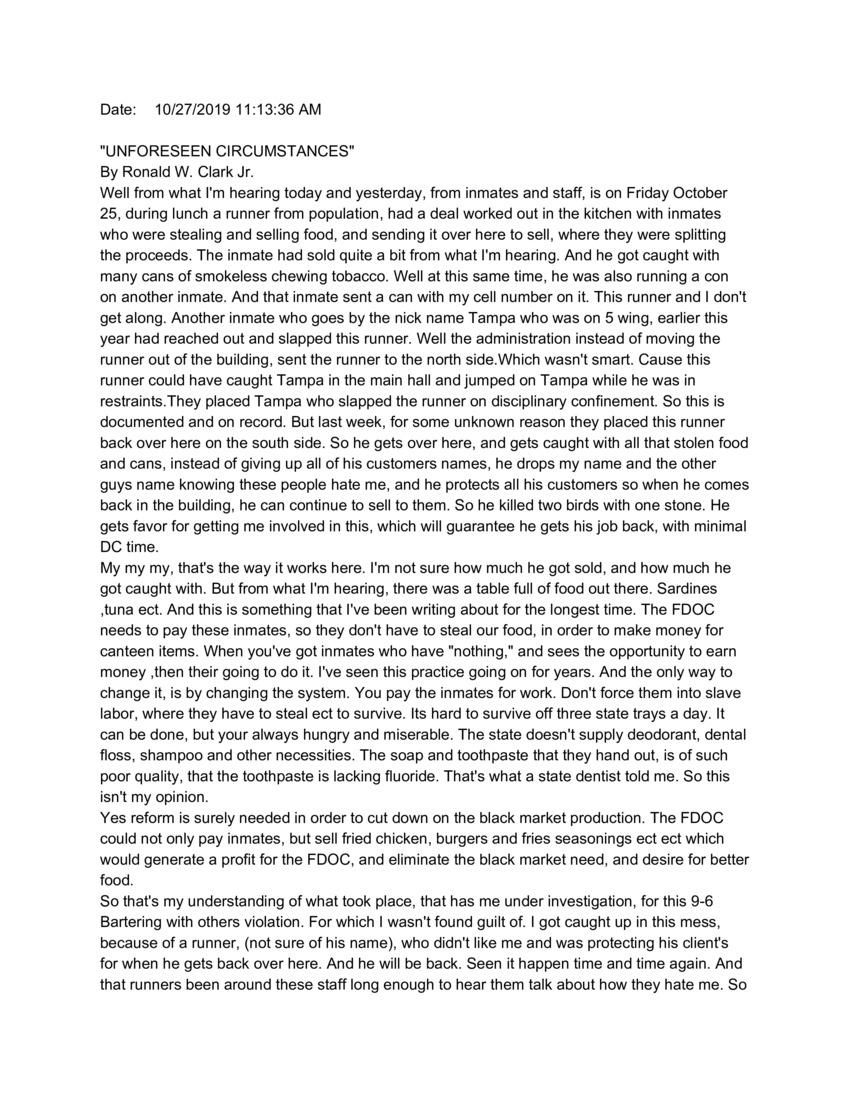 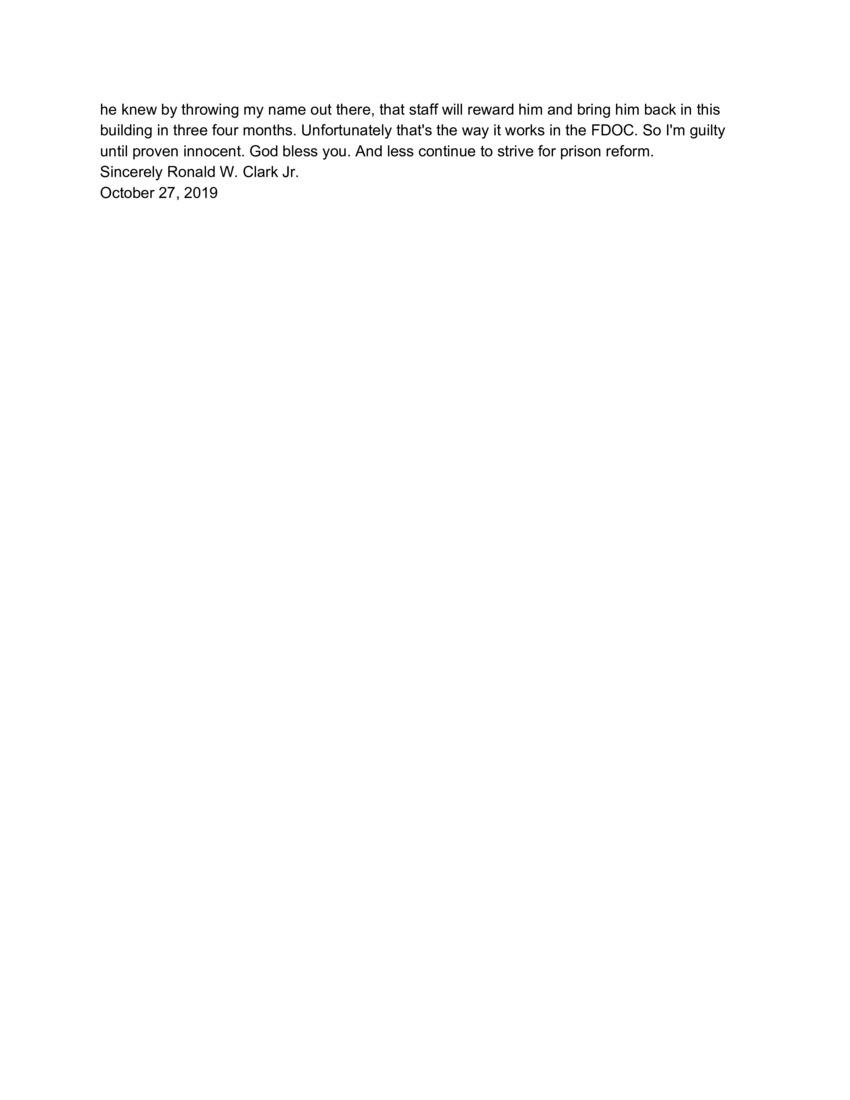 "UNFORESEEN CIRCUMSTANCES"
By Ronald W. Clark Jr.
Well from what I'm hearing today and yesterday, from inmates and staff, is on Friday October 25, during lunch a runner from population, had a deal worked out in the kitchen with the inmates who were stealing and selling food, and sending it over here to sell, where they were splitting the proceeds. The inmate had sold quite a bit from what I'm hearing. And he got caught with many cans of smokeless chewing tobacco. Well at this same time, he was also running a con on another inmate. And that inmate sent a can with my cell number on it. This runner and I don't get along. Another inmate who goes by the nick name Tampa who was on 5 wing, earlier this year had reached out and slapped this runner. Well the administration instead of moving the runner out of the building, sent the runner to the north side.Which wasn't smart. Cause this runner could have caught Tampa in the main hall and jumped on Tampa while he was in restraints. They placed Tampa who slapped the runner on disciplinary confinement. So this is documented and on the record. But last week, for some unknown reason they placed this runner back over here on the south side. So he gets over here, and gets caught with all that stolen food and cans, instead of giving up all of his customers names, he drops my name and the other guys name knowing these people hate me, and he protects all his customers so when he comes back in the building, he can continue to sell to them. So he killed two birds with one stone. He gets favor for getting me involved in this, which will guarantee he gets his job back, with minimal DC time.
My my my, that's the way it works here. I'm not sure how much he got sold, and how much he got caught with. But from what I'm hearing, there was a table full of food out there. Sardines , tuna ect. And this is something I've been writing about for the longest time. The FDOC needs to pay these inmates, so they don't have to steal our food, in order to make money for canteen items. When you've got inmates who have "nothing," and sees the opportunity to earn money ,then their going to do it. I've seen this practice going on for years. And the only way to change it, is by changing the system. You pay the inmates for work. Don't force them into slave labor, where they have to steal ect to survive. Its hard to survive off three state trays a day. It can be done, but your always hungry and miserable. The state doesn't supply deodorant, dental floss, shampoo and other necessities. The soap and toothpaste that they hand out, is of such poor quality, that the toothpaste is lacking fluoride. That's what a state dentist told me. So this isn't my opinion.
Yes reform is surely needed in order to cut down on the black market production. The FDOC could not only pay inmates, but sell fried chicken, burgers and fries seasonings ect ect which would generate profit for the FDOC, and eliminate the black market need, and desire for better food.
So that's my understanding of what took place, that has me under investigation, for this 9-6 Bartering with others violation. For which I wans't found guilty of. I got caught up in this mess, because of a runner, (not sure of his name,) who didn't like me and was protecting his client's for when he gets back over here. And he will be back. Seen it happen time and time again. And that runners been around these staff long enough to hear them talk about how they hate me. So he knew by throwing my name out there, that staff will reward him and bring him back in this building in three four months. Unfortunately that's the way it works in the FDOC. So I'm guilty until proven innocent. God bless you. And less continue to strive for prison reform.
Sincerely Ronald W. Clark Jr
October 27, 2019