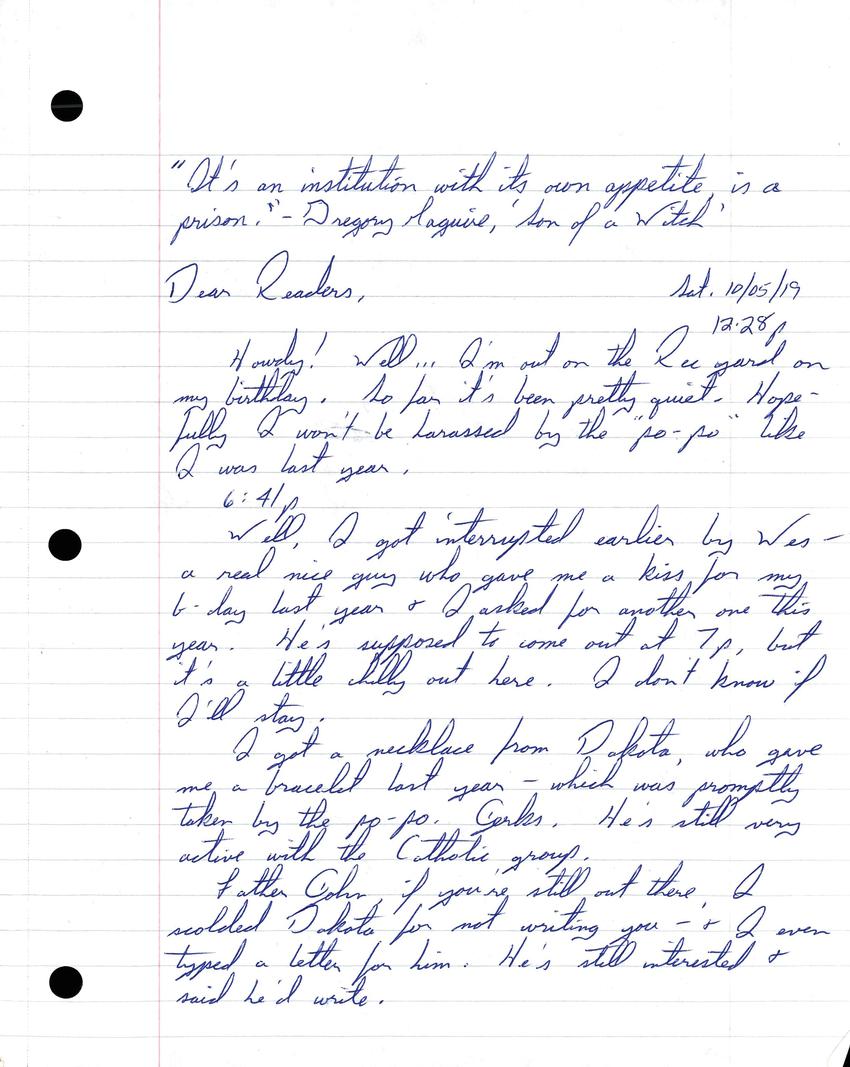 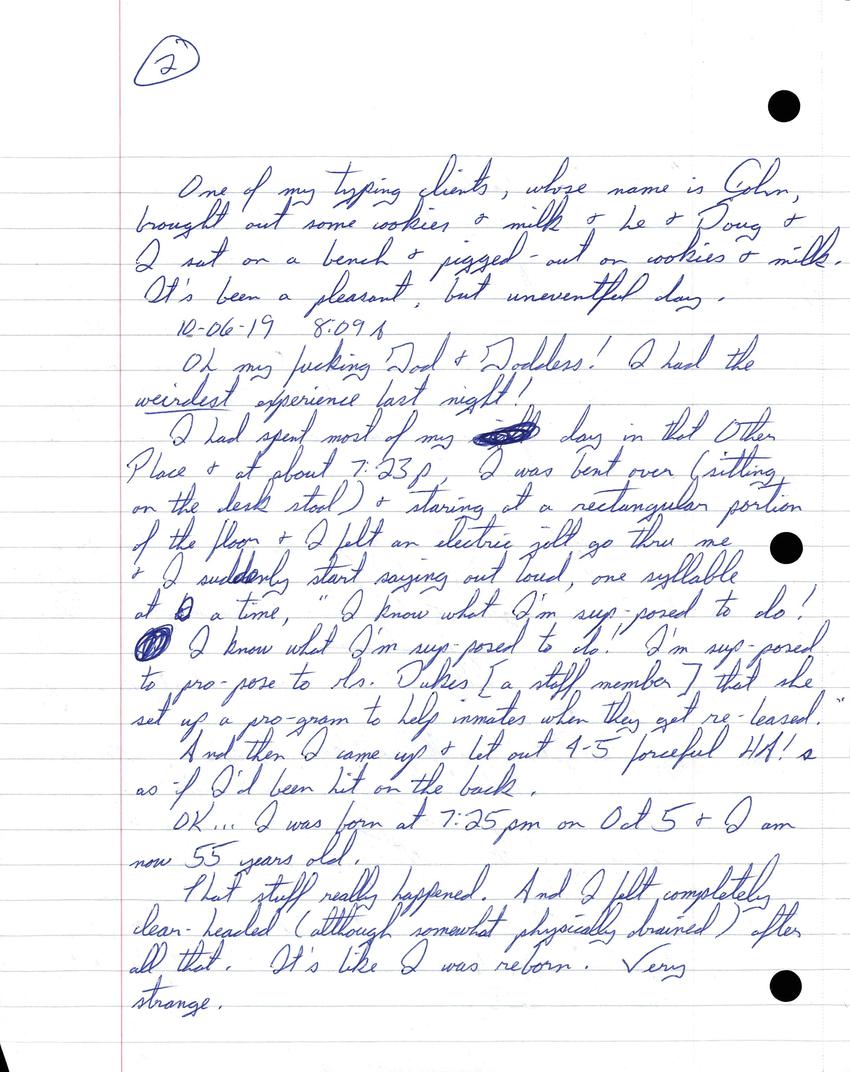 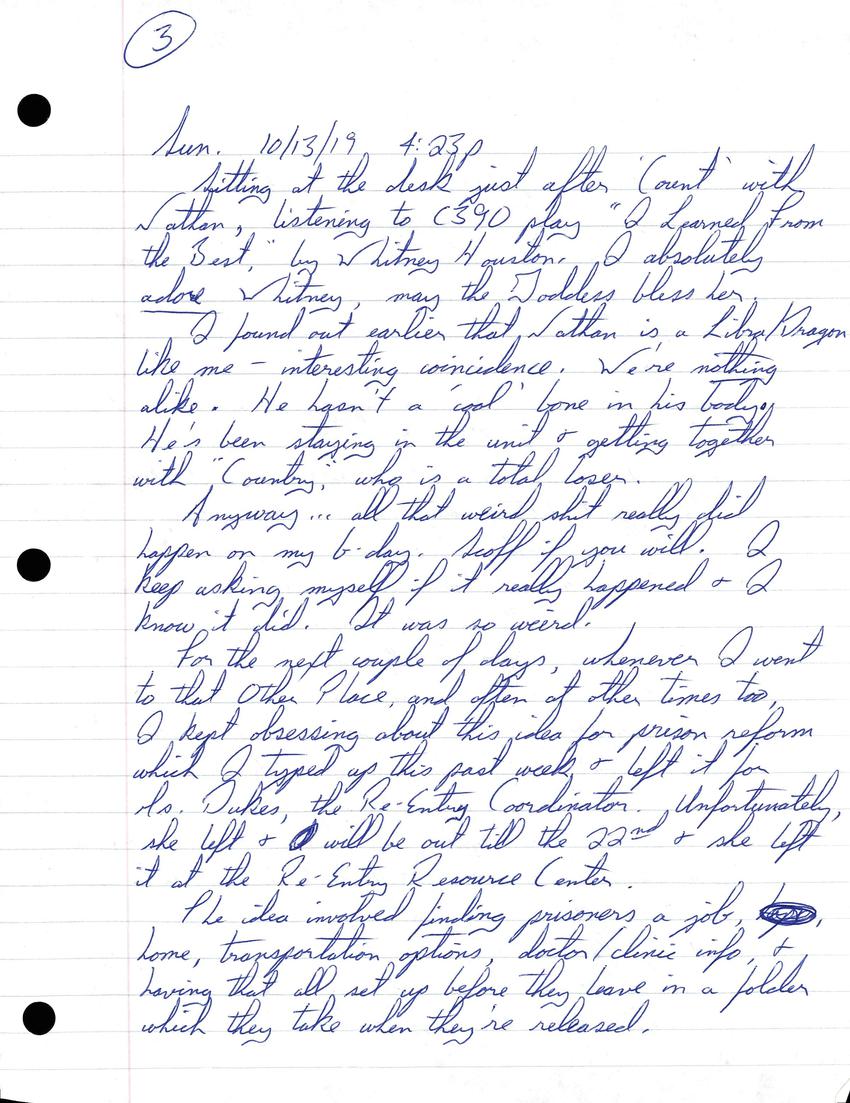 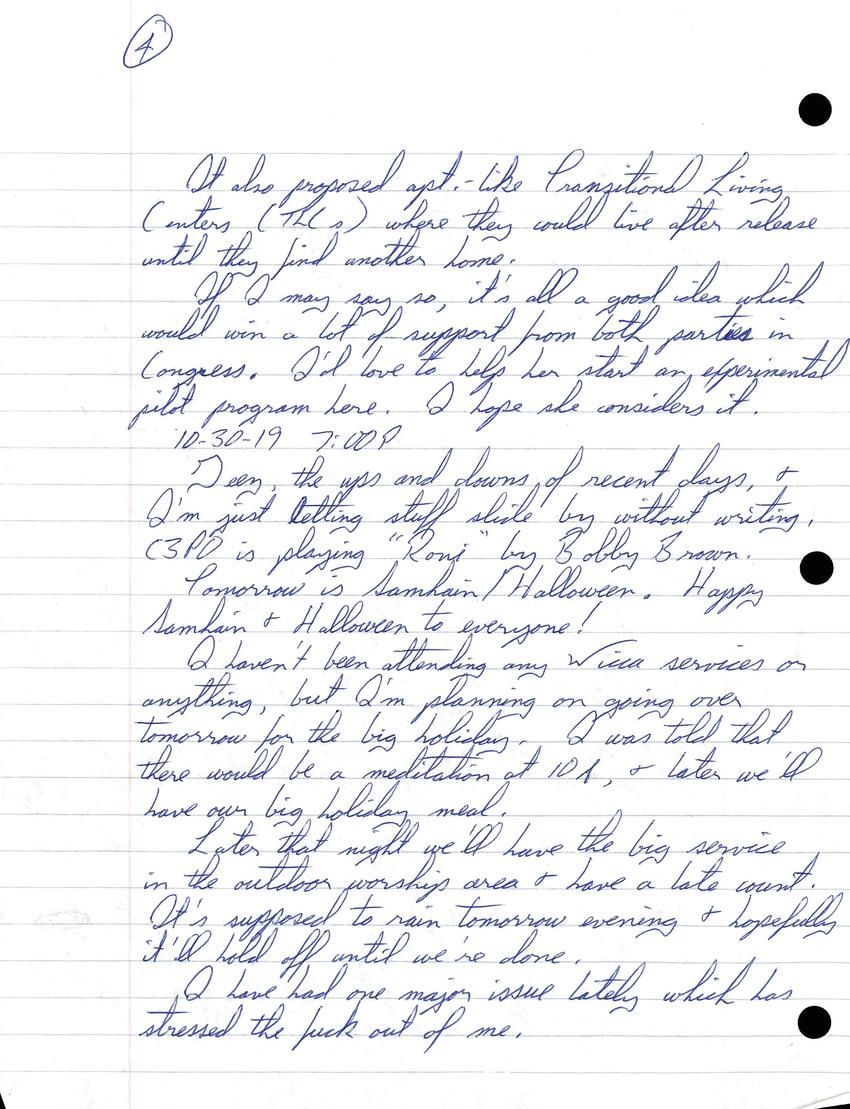 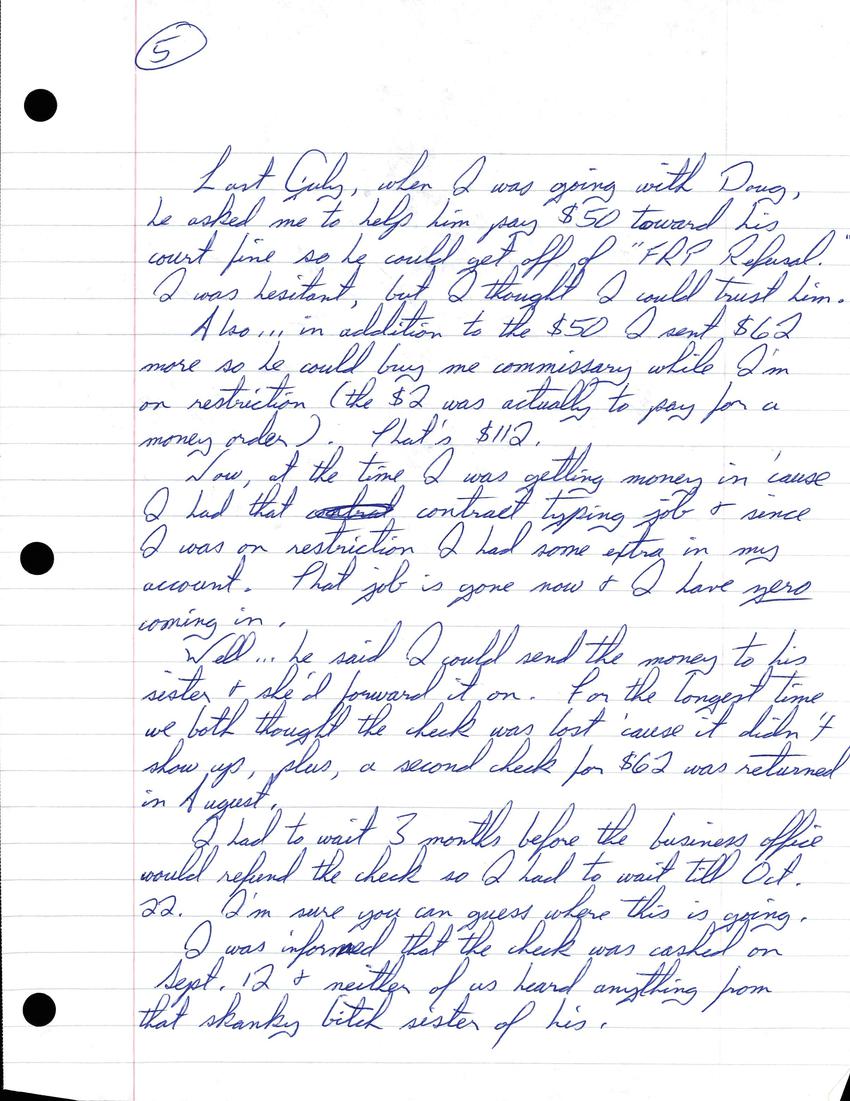 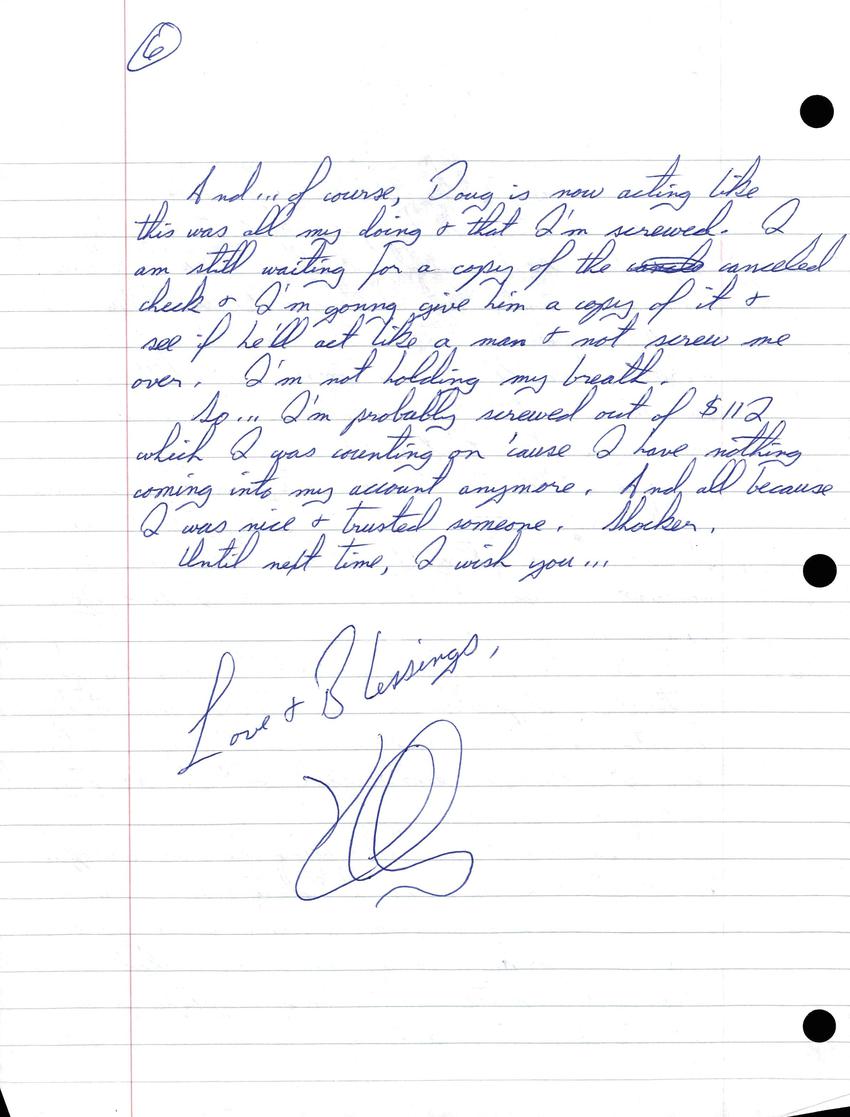 "It's an institution with its own appetite, is a prison."
—Gregory Maguire, Son of A Witch

6:41 PM
Well, I got interrupted earlier by Wes, a real nice guy who gave me a kiss for my bday last year. I asked for another one this year. He's supposed to come out at 7 PM, but it's a little chilly out here. I don't know if I'll stay.

I got a necklace from Dakota who gave me a bracelet last year, which was promptly taken by the po-po. Jerks. He's still very active with the Catholic group.

Father John, if you're still out there, I scolded Dakota for not writing you. I even typed a letter for him. He's still interested and said he'd write.

Oh my fucking God and Goddess! I had the weirdest experience last night!

And then I came up and let out four or five forceful HA! as if I'd been hit on the back.

That stuff really happened. And I felt completely clear headed (although somewhat physically drained) after all that. It's like I was reborn. Very strange.

Sitting at the desk just after count with Nathan, listening to C3P0 play "I Learned From The Best" by Whitney Houston. I absolutely adore Whitney, may the Goddess bless her.

I found out earlier that Nathan is a Libra/Dragon like me—interesting coincidence. We're nothing alike. He hasn't a "cool" bone in his body. He's been staying in the unit and getting together with Country who is a total loser.

Anyway... all that weird shit really did happen on my bday. Scoff if you will. I keep asking myself if it really happened, and I know it did. It was so weird.

For the next couple of days, whenever i went to that Other Place and often at other times too, I kept obsessing about this idea for prison reform which I typed up this past week and left for Ms. Dukes, the Re-Entry Coordinator. Unfortunately, she left and will be out until the 22nd. She left it at the Re-Entry Resource Center.

The idea involved finding prisoners a job, home, transportation options, doctor/clinic info, and having that all set up before they leave in a folder they take when they're released. It also proposed apartments like Transitional Living Center (TLC) where they could live after release until they find another home.

If I may say so, it's all a good idea which would win a lot of support from both parties in Congress. I'd love to help her start an experimental pilot program here. I hope she considers it.

Jeez, the ups and downs of recent days, and I'm just letting staff slide by without writing. C3PO is playing "Roni" by Bobby Brown.

Tomorrow is Samhain/Halloween. Happy Samhain and Halloween to everyone!

I haven't been attending any Wicca services or anything, but I'm planning on going over tomorrow for the big holiday. I was told that there would be a meditation at 10 AM and later we'll have our big holiday meal. Later that night, we'll have the big service in the outdoor worship area nad have a late count. It's supposed to rain tomorrow evening, and hopefully it'll hold off until we're done.

I have had one major issue lately which has stressed the fuck out of me.

Last July, when I was going with Doug, he asked me to help him pay $50 toward his court fine so he could get off of FRP Refusal. I was hesitant, but I thought I could trust him. Also... in addition to the $50, I sent $62 more so he could buy me commissary which I'm on restriction (the $2 was actually to pay for a money order). That's $112.

Now, at the time, I was getting money in 'cause I had the contract typing job. Since I was on restriction, I had some extra in my account. That job is gone now, and I have zero coming in.

Well... he said I could send the money to his sister, and she'd forward it on. For the longest time, we both thought the check was lost 'cause it didn't show up. Plus, a second check for $62 was returned in August. I had to wait three months before the business office would refund the check so I had to wait till October 22. I'm sure you can guess where this is going.

I was informed that the check was cashed on September 12, and neither of us had heard anything from that skanky bitch sister of his. And of course, Doug is now acting like this was all my doing and that I'm screwed. I am still waiting for a copy of the canceled check, and I'm going to give him a copy of it and see if he'll act like a man and not screw me over. I'm not holding my breath.

So... I'm probably screwed out of $112 which I was counting on 'cause I have nothing coming into my account anymore. And all because I was nice and trusted someone. Shocker.

I hope your trust has not been taken advantage from.
x and warm hug from Rita!
(scanned reply – view as blog post)
uploaded Jan. 13, 2020.  Original (PDF) 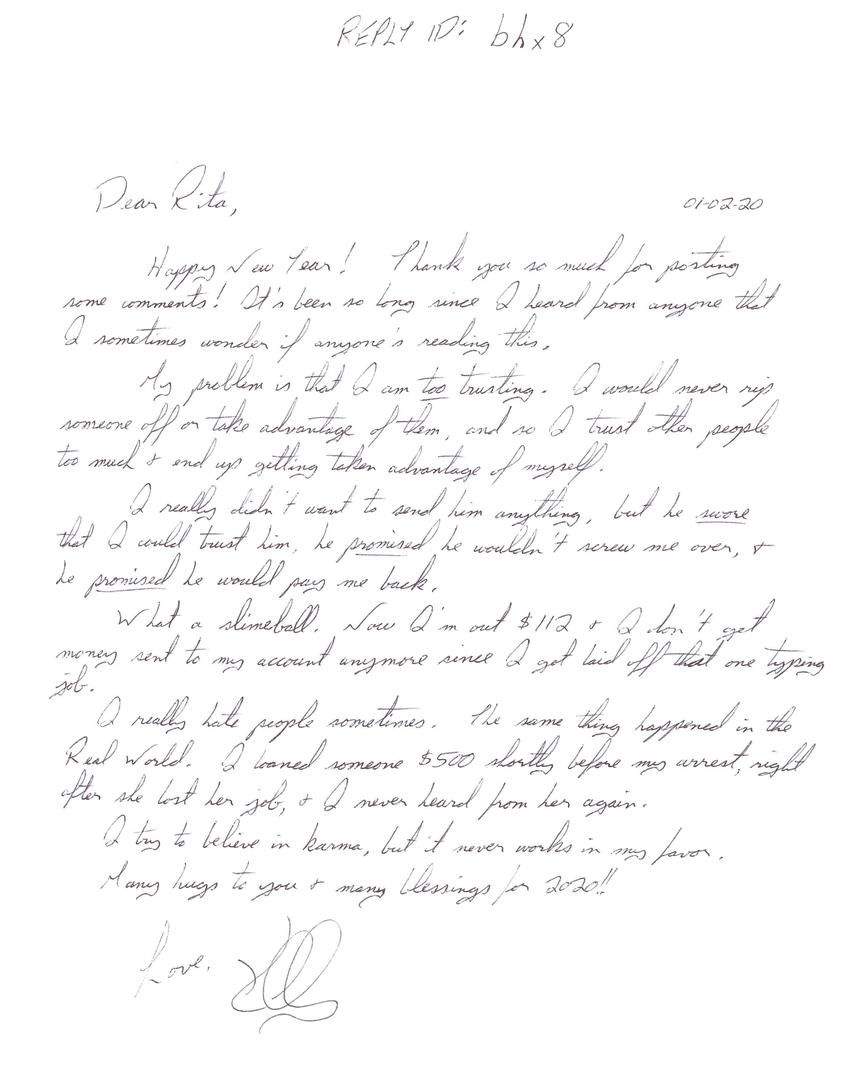