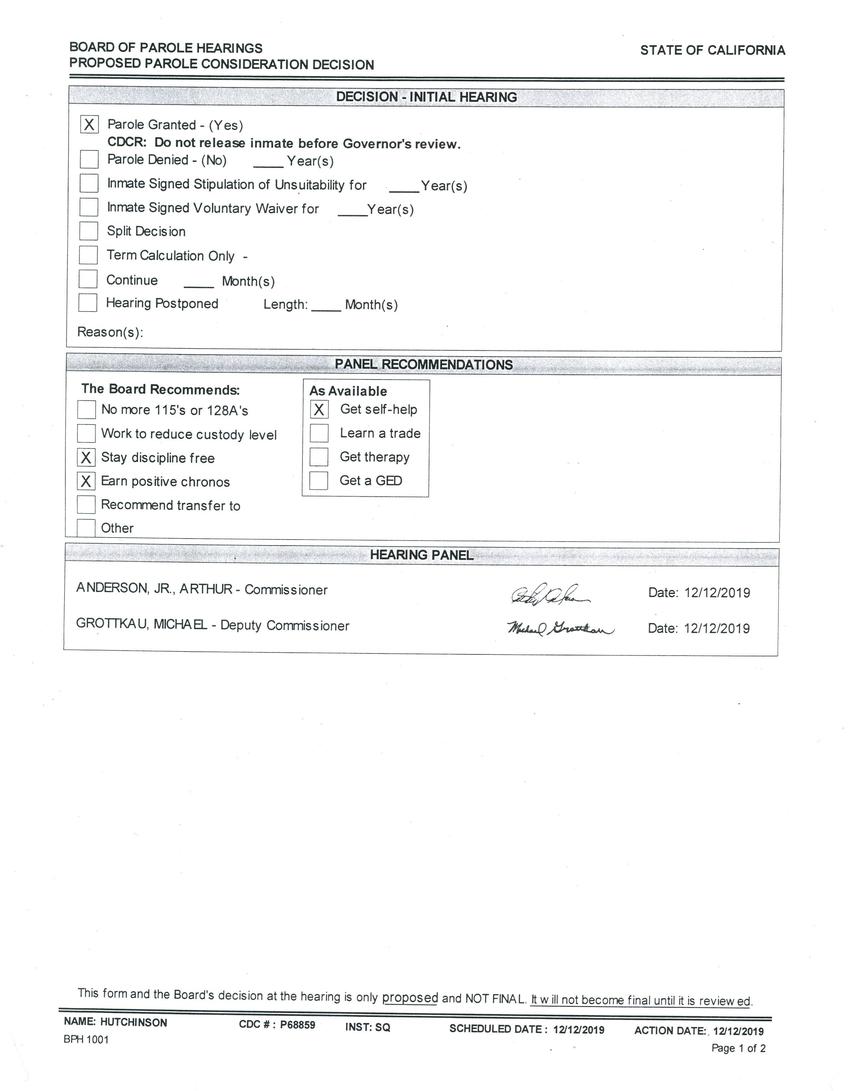 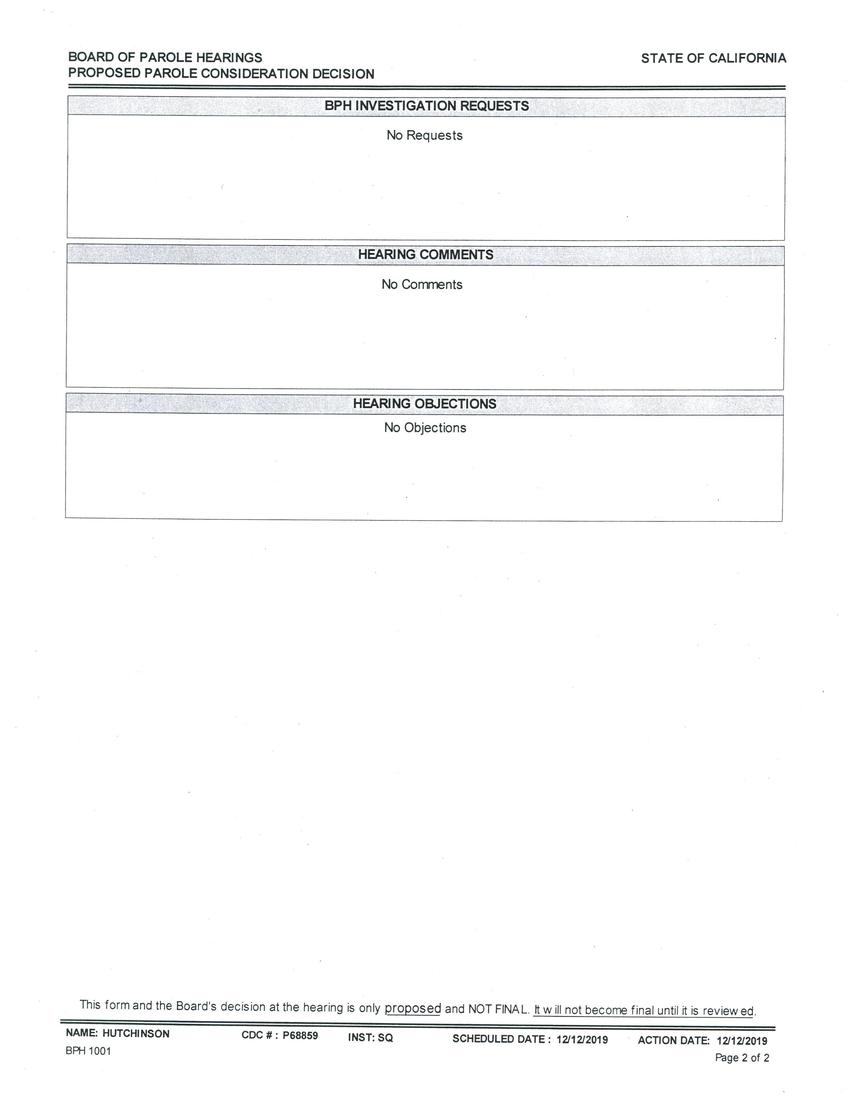 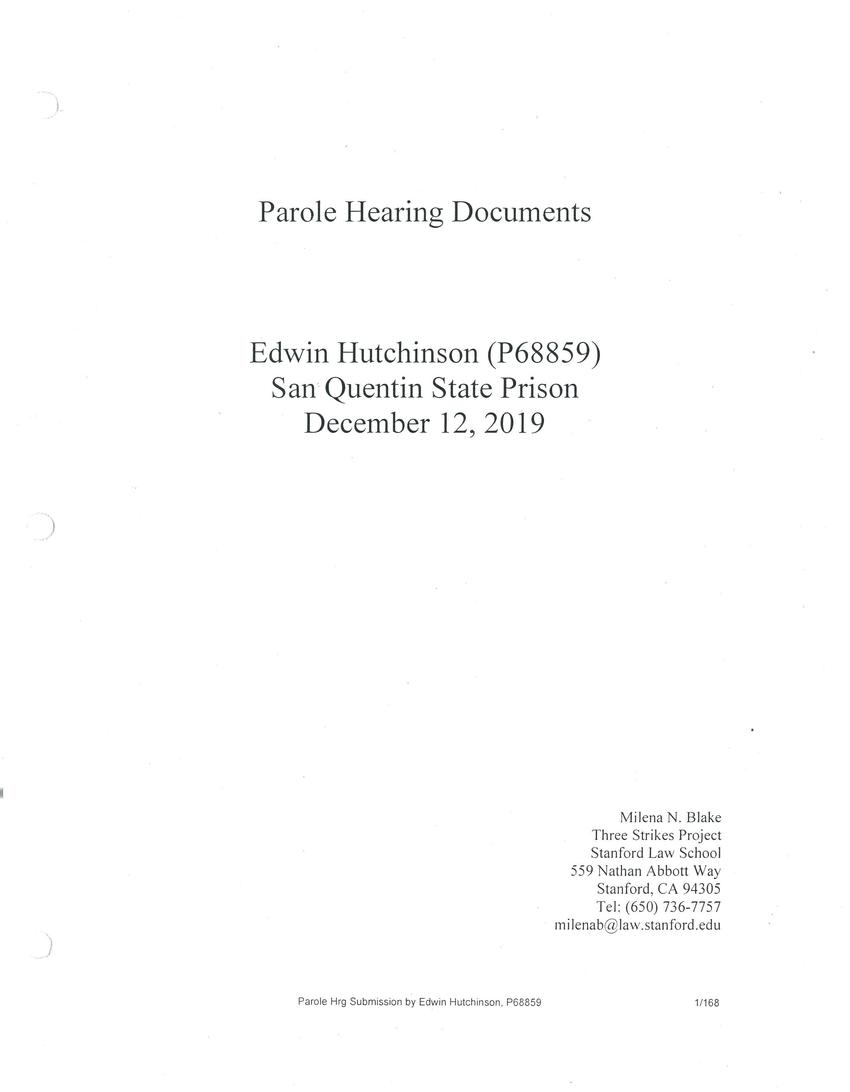 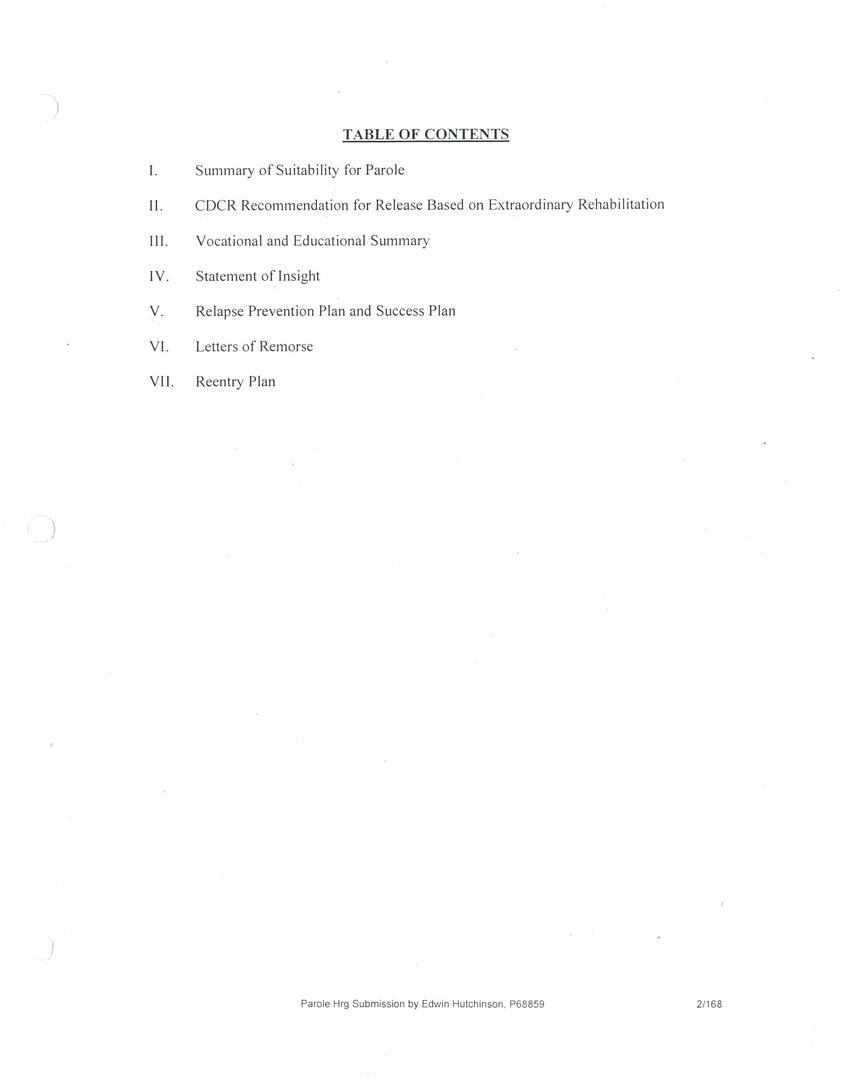 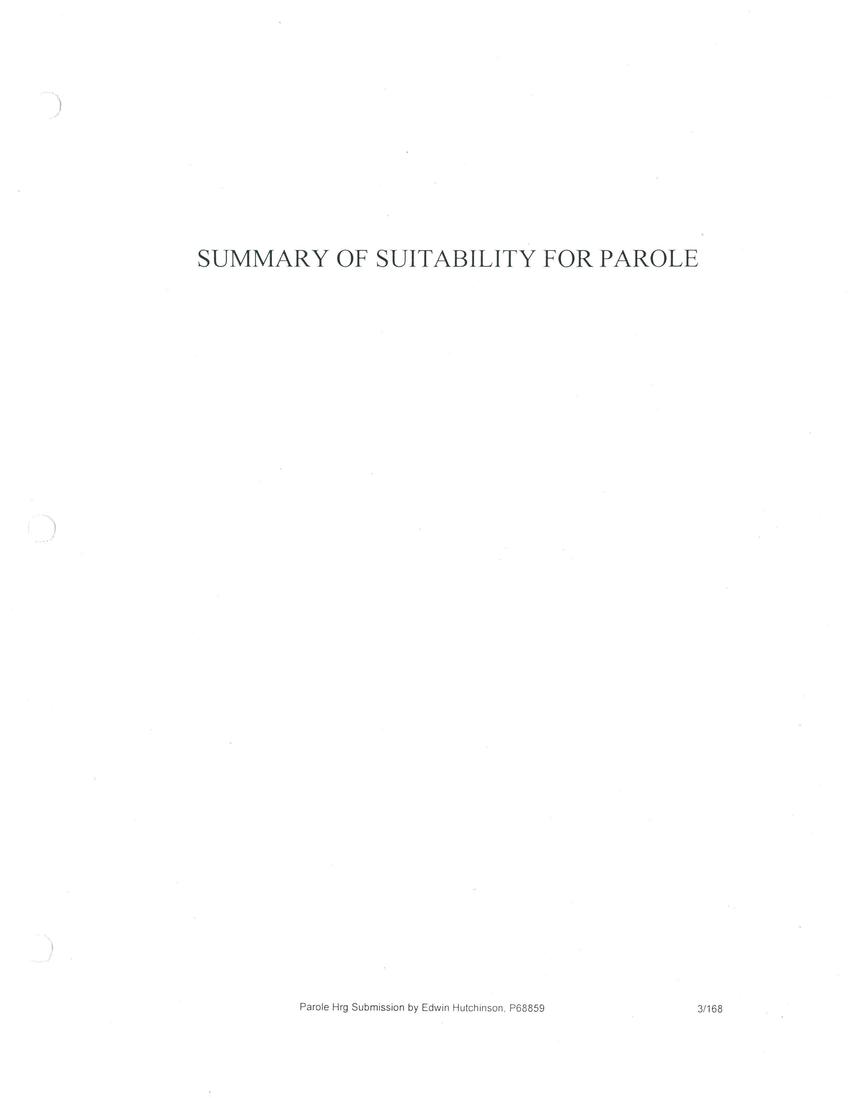 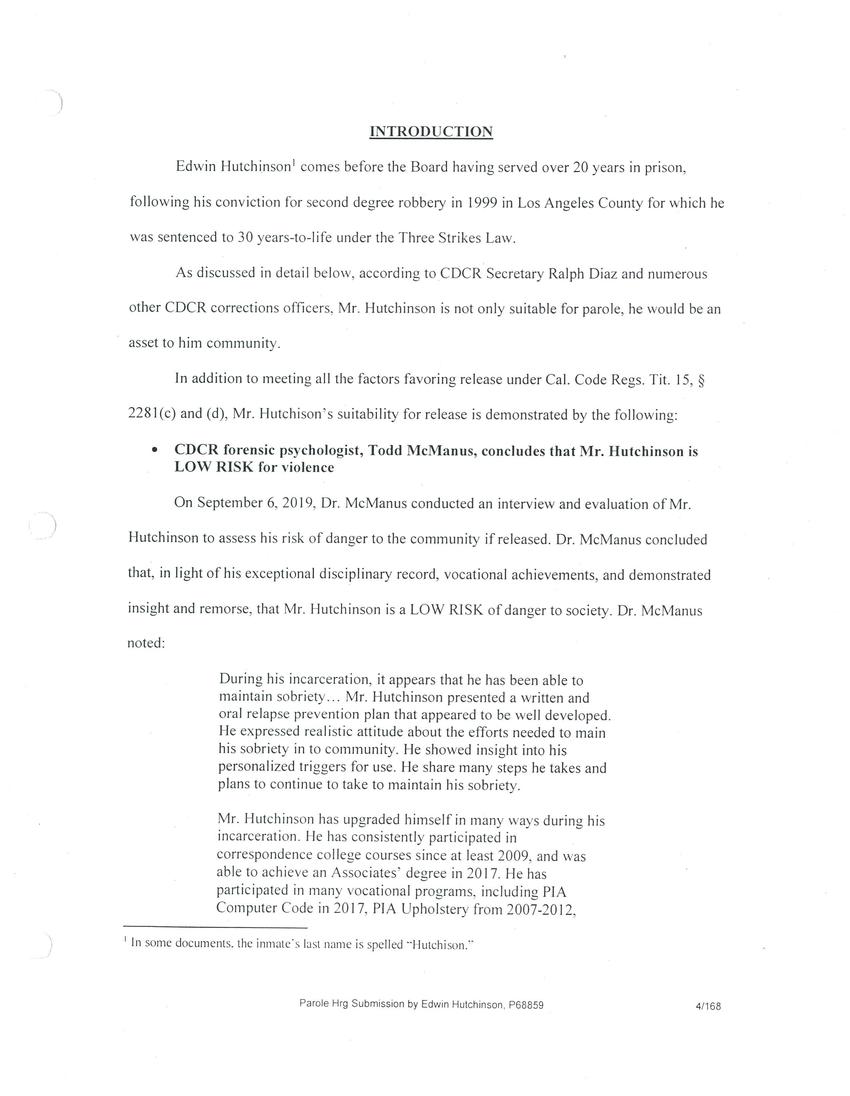 SUMMARY OF SUITABILITY FOR PAROLE

INTRODUCTION
Edwin Hutchinson' comes before the Board having served over 20 years in prison, following his conviction for second degree robbery in 1999 in Los Angeles County for which he was sentenced to 30 years-to-life under the Three Strikes Law.
As discussed in detail below, according to CDCR Secretary Ralph Diaz and numerous other CDCR corrections officers, Mr. Hutchinson is not only suitable for parole, he would be an asset to his community.
In addition to meeting all the factors favoring release under Cal. Code Regs. Tit. 15.
2281(c) and (d), Mr. Hutchison's suitability for release is demonstrated by the following:

• CDCR forensic psychologist, Todd McManus, concludes that Mr. Hutchinson is LOW RISK for violence
On September 6, 2019, Dr. McManus conducted an interview and evaluation of Mr. Hutchinson to assess his risk of danger to the community if released. Dr. McManus concluded that, in light of his exceptional disciplinary record, vocational achievements, and demonstrated insight and remorse, that Mr. Hutchinson is a LOW RISK of danger to society. Dr. McManus noted:
During his incarceration, it appears that he has been able to maintain sobriety... Mr. Hutchinson presented a written and oral relapse prevention plan that appeared to be well developed. He expressed a realistic attitude about the efforts needed to main his sobriety in to community. He showed insight into his personalized triggers for use. He share many steps he takes and plans to continue to take to maintain his sobriety.
Mr. Hutchinson has upgraded himself in many ways during his incarceration. He has consistently participated in correspondence college courses since at least 2009. and was able to achieve an Associates' degree in 2017. He has participated in many vocational programs, including PIA Computer Code in 2017, PIA Upholstery from 2007-2012.

In some documents, the inmate's last name is spelled "Hutchison."

Vocational Preparation in 2003, and two months of Auto Body training in 2001... multiple officers, supervisors, and facilitators have written laudatory chronos which have attested to his responsible conduct. In addition, it should be noted that a chrono dated 8/1/12 documented that he saved the life of an inmate who had passed out and was about to fall from the tier.
Mr. Hutchinson has maintained a commendable level of participation in self-help groups for most of his incarceration.
Mr. Hutchinson's parole plans appear feasible... He showed the undersigned multiple planning documents he has crated which illustrated a great deal of thought into the obstacles he could face and resources to handle such.
Many support letters have been written for him from supervisors, officers, facilitators, and instructors, which have included offers of continued support and access to program resources.
• CDCR Secretary Ralph Diaz recommended that Mr. Hutchinson be released because he is fully rehabilitated, would be a "positive asset to the community," and his continued incarceration in not in the interest of justice.
CDCR Secretary Ralph Diaz personally recommended that Mr. Hutchinson be given relief under Penal Code section 1170(d)(1) and released due to his extraordinary rehabilitation while in prison. Before Secretary Diaz could make this recommendation, the Board of Parole
Hearings was required to review Mr. Hutchinson's entire prison file, as well as his criminal history, and conduct a notification of victims, and a full public safety review. See Penal Code section 1170(d)(): Cal. Code Regs. tit. 15. S S 3076.2. 3076.2(e)(2).
Mr. Hutchinson was one of the very first inmates to receive Secretary Diaz's recommendation under the program instated by former Governor Jerry Brown to reward prisoners with such exceptional records of proven, in-prison. The program includes amendments to Penal Code section 1170(d)(1) enacted in the Public Safety Omnibus Act of 2018, Assembly Bill ("AB") 1812. Secretary Diaz's recommendation that Mr. Hutchinson be released was based
on multiple layers of CDCR review.
• Multiple corrections officers extoll Mr. Hutchinson's work ethic, integrity, commitment to rehabilitation, leadership, good example to other inmates, and preparation for release.
Multiple CDCR prison officers who know Mr. Hutchinson personally, interact with him daily, and who have no incentive to support his case, attest to Mr. Hutchinson's reformed character and suitability for release. Correctional officers extoll Mr. Hutchinson's work ethic,
integrity, commitment to rehabilitation, leadership, good example to other inmates, and preparation for release. For example, Correctional Officer C.T. Smith says Mr. Hutchinson "has addressed his past criminal behavior, and substance abuse issues, and is fully prepared to
successfully transition back into his community as a positive and productive member of society," and that he believes that Mr. Hutchinson ''is no longer a threat to society and fully endorse[s] the release of inmate Hutchison." Correctional Officer R. Luna says that Mr. Hutchinson "has proven to be truly the type of inmate the department is trying to produce and release into our
society" and Correctional Officer K. Davis recommends Mr. Hutchinson for release and would be happy to have him as a neighbor." Mr. Hutchinson has received over 80 commendations ("chronos") from prison staff, volunteers and administrators for participation in and completion of rehabilitative programs including victim awareness, positive decision-making, and alternatives to violence.
• Mr. Hutchinson has received only two Serious Rules Violation Reports during his 20 years of incarceration and has maintained the lowest possible Classification Score (19) for over 10 years. Mr. Hutchinson has an excellent prison disciplinary record. He has received only two minor Rules Violation Reports, one for performance in 2005 and one for misuse of a government computer in 2009. Both were in the least serious divisions, division F and E respectively. His exceptional behavior is reflected in his security Classification Score, CDCR's system-wide measure of prisoner behavior. Mr. Hutchinson has the lowest and best possible security classification score for an inmate serving a life sentence. His Classification Score would be zero but for a mandatory minimum score of 19, based on CDCR's categorization of life-inmates.
According to California case law, Mr. Hutchinson's score reflects a "very low security risk. In re Stoneroad, 215 Cal. App. 4th 596, 605 (2013). Notably, Mr. Hutchinson has never received a write-up for refusing a drug or alcohol test, nor has he ever tested positive for drugs or alcohol, despite CDCR's random testing policy. See Cal. Code Regs. tit. 15. $ 3290(c)-(e).
• Mr. Hutchinson has the best possible score on the California Static Risk Assessment (CSRA),
Mr. Hutchinson has the best-possible score on the California Static Risk Assessment (CSRA) protocol, which was developed by CDCR and the University of California and calibrates 22 objective criminogenic risk factors, including criminal history and past performance on
parole.
• Mr. Hutchinson's age (59) places him in one of the lowest possible risk categories for recidivism.
Mr. Hutchinson's recidivism risk is dramatically reduced by his current age (58 years old) according to CDCR regulations, empirical studies, and California case law. See, e.g. Weisberg et. al., Stanford Criminal Justice Center, “Life in Limbo: An Examination of Parole Release for Prisoners Serving Life Sentences Without the Possibility of Parole in California (Sept. 2011).

• Mr. Hutchinson's prior record of violence is remote. His prior robbery convictions are from almost 30 years ago, and his battery charge, stemming from a domestic dispute, is from over 30 years ago. Since he has been incarcerated, he has had zero violent incidents or events. § 2281(c)(2)
• Mr. Hutchinson has a stable social history, having grown up in an intact family with his mother, father and four siblings. He did well in school graduating high school and completing two years of college before joining the army. § 2281(c)(3)
• Mr. Hutchinson has never committed a sex offense. § 2281(c)(4)
• Mr. Hutchinson does not have a lengthy history of serious mental illness.
• Mr. Hutchinson was diagnosed with bipolar disorder but according to the clinical assessment by Dr. McManus concludes his disorder is in "full remission." Pg. 6. § 2281(c)(5).
• Mr. Hutchinson has an excellent disciplinary record during his current incarceration. He has received only two Rules Violations Reports during his incarceration, and none in over 13 years. In 2005, he received a division "F" violation for performance. In 2006, he received a division "E" violation for misuse of government property. § 2281(c)(6).
(2) All factors indicating suitability under Cal. Code Regs. tit. 15 § 2281(d) apply to Mr. Hutchinson:
• Mr. Hutchinson has no record of juvenile adjudications. § 2281(d)(I).
• Mr. Hutchinson has a stable social history and has maintained family relationships throughout his incarceration. § 2281(d)(2).
• He has demonstrated sincere remorse for his current and past offenses. § 2281(0)3).
• He committed his current offense while in the grip of a severe and untreated drug addiction. § 2281(c)(4).
Mr. Hutchinson's criminal history is almost exclusively related to supporting his substance use disorder. Although he has committed several robberies, he has never injured any of his robbery victims. § 2281(d)(6).
• Mr. Hutchinson is now 59 years old and a low risk to reoffend. 2281(d)(7).
• Mr. Hutchinson has done significant planning and outreach to prepare for release and reentry. He has received excellent work supervisor reports and has trained in a number of areas, including sewing machine operator and upholstery. He has been accepted to a number of residential reentry program including Amity Foundation in Los Angeles, and the Oakland Dream center, among others. He has also secured several job interviews and offers upon release. Dr. McManus found Mr. Hutchinson's parole plans to be feasible. § 2281(d)(8).
• Numerous prison staff attest to Mr. Hutchinson's excelled institutional behavior and work
ethic, which demonstrate his "enhanced ability to function within the law upon release." 2281(0)9).
* Cal. Code Regs. tit. 15 § 2281(d)(5) "Battered Woman Syndrome" is omitted as it does not apply to Mr. Hutchinson.
H. Mr. Hutchinson has an excellent release plan, including a professional residential reentry program and family support.
Mr. Hutchinson recognizes the importance of continuing his exceptional progress while in the community. See Cal. Code Regs. tit.15. $2281(d)(8) (a factor indicating suitability for parole is an inmate's having made "realistic plans for release"). Mr. Hutchinson has been preparing for his release for a number of years. In addition to the many rehabilitative and vocational programs he has completed. Mr. Hutchinson has reached out and been accepted to a
number of residential reentry programs, both in the Bay Area and Los Angeles. He knows that maintaining his 20 years of sobriety will take work, so he has proactively researched Alcoholic Anonymous and Narcotics Anonymous meetings to attend once released and has requested an outside sponsor from both organizations. He has also participated in a number of job fairs and other outreach and has a number of interview and job offers once released.
Once he has completed his reentry program, his family is eager to have him home. Although his parents have passed away, his is very close to his sister and brother, who speak of his remarkable change while incarcerated. This assessment concurs with the findings of Forensic Psychologist Todd McManus who said that Mr. Hutchinson's life crime served as a wake-up call and spurred significant action to rehabilitate himself.

CONCLUSION
Mr. Hutchinson exemplifies parole suitability. He has he served 20 years in prison for his crimes, fulfilling the punitive goals of incarceration. But he has not wasted those 20 years. During that time, he has worked tirelessly to improve himself while in prison, serving the rehabilitative goals of incarceration. Over the past 20 years, he has gained the trust and respect of institution staff and of inmates, he has put himself at risk by refusing to participate in negative prison culture. He has been of invaluable service, receiving numerous accolades for his work within the prison, not only for its high quality, but for his willingness to help others and act as a mentor. He has furthered his education, earning his Associate's Degree while incarcerated, and has gained vocational skills that will be useful in today's workforce. He has demonstrated his remorse for and insight into his past criminal lifestyle.