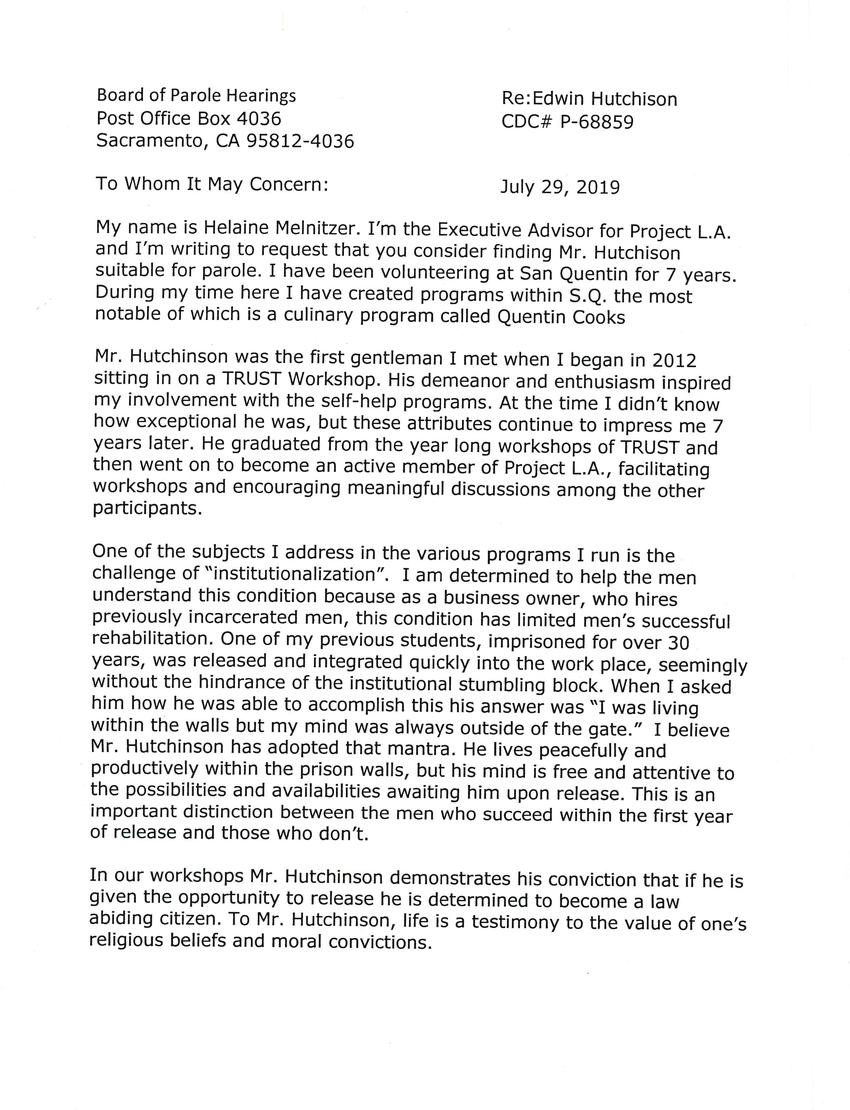 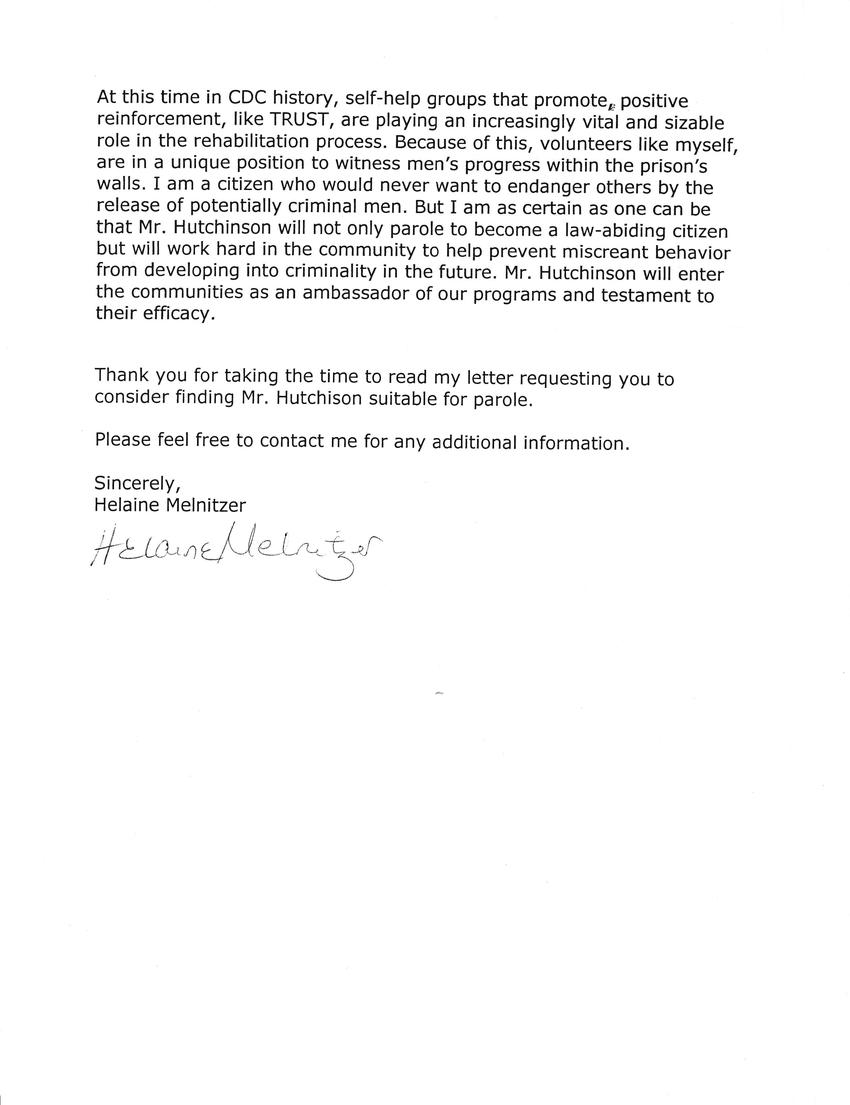 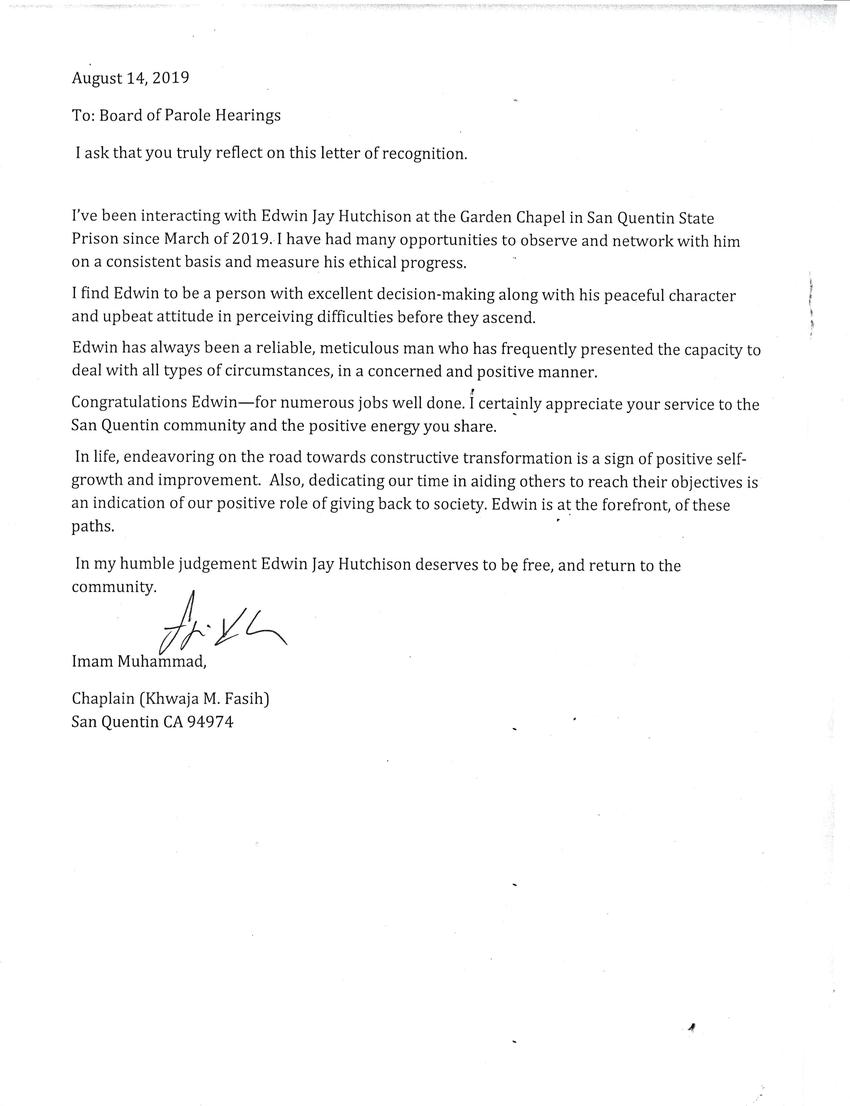 My name is Helaine Melnitzer. I'm the Executive Advisor for Project L.A. and I'm writing to request that you consider finding Mr. Hutchison suitable for parole. I have been volunteering at San Quentin for 7 years. During my time here I have created programs within S.Q the most notable of which is a culinary program called Quentin Cooks

Mr. Hutchinson was the first gentleman I met when I began in 2012 sitting in on a TRUST Workshop. His demeanor and enthusiasm inspired my involvement with the self-help programs. At the time I didn't know how exceptional he was, but these attributes continue to impress me 7 years later. He graduated from the year long workshops of TRUST and then went on to become an active member of Project L.A., facilitating workshops and encouraging meaningful discussions among the other participants. One of the subjects I address in the various programs I run is the challenge of "institutionalization". I am determined to help the men understand this condition because as a business owner, who hires previously incarcerated men, this condition has limited men's successful rehabilitation. One of my previous students, imprisoned for over 30 years, was released and integrated quickly into the work place, seemingly without the hindrance of the institutional stumbling block. When I asked him how he was able to accomplish this his answer was"I was living within the walls but my mind was always outside of the gate." I believe Mr. Hutchinson has adopted that mantra. He lives peacefully and productively within the prison walls, but his mind is free and attentive to the possibilities and availabilities awaiting him upon release. This is an important distinction between the men who succeed within the first year of release and those who don't.

In our workshops Mr. Hutchinson demonstrates his conviction that if he is given the opportunity to release he is determined to become a law abiding citizen. To Mr. Hutchinson, life is a testimony to the value of one's religious beliefs and moral convictions.

At this time in CDC history, self-help groups that promote positive reinforcement, like TRUST, are playing an increasingly vital and sizable role in the rehabilitation process. Because of this, volunteers like myself are in a unique position to witness men's progress within the prison's walls. I am a citizen who would never want to endanger others by the release of potentially criminal men. But I am as certain as one can be that Mr. Hutchinson will not only parole to become a law-abiding citizen but will work hard in the community to help prevent miscreant behavior from developing into criminality in the future. Mr. Hutchinson will enter the communities as an ambassador of our programs and testament to their efficacy.

Thank you for taking the time to read my letter requesting you to consider finding Mr. Hutchison suitable for parole.

Please feel free to contact me for any additional information.

To: Board of Parole Hearings

I ask that you truly reflect on this letter of recognition.

I've been interacting with Edwin Jay Hutchison at the Garden Chapel in San Quentin State Prison since March of 2019. I have had many opportunities to observe and network with him on a consistent basis and measure his ethical progress.

I find Edwin to be a person with excellent decision-making along with his peaceful character and upbeat attitude in perceiving difficulties before they ascend.

Edwin has always been a reliable, meticulous man who has frequently presented the capacity to deal with all types of circumstances in a concerned and positive manner.

Congratulations Edwin-for numerous jobs well done. I certainly appreciate your service to the San Quentin community and the positive energy you share.

In life, endeavoring on the road towards constructive transformation is a sign of positive self-growth and improvement. Also, dedicating our time in aiding others to reach their objectives is an indication of our positive role of giving back to society. Edwin is at the forefront, of these paths.

In my humble judgement Edwin Jay Hutchison deserves to be free, and return to the community.
fr.yl
Imam Muhammad,