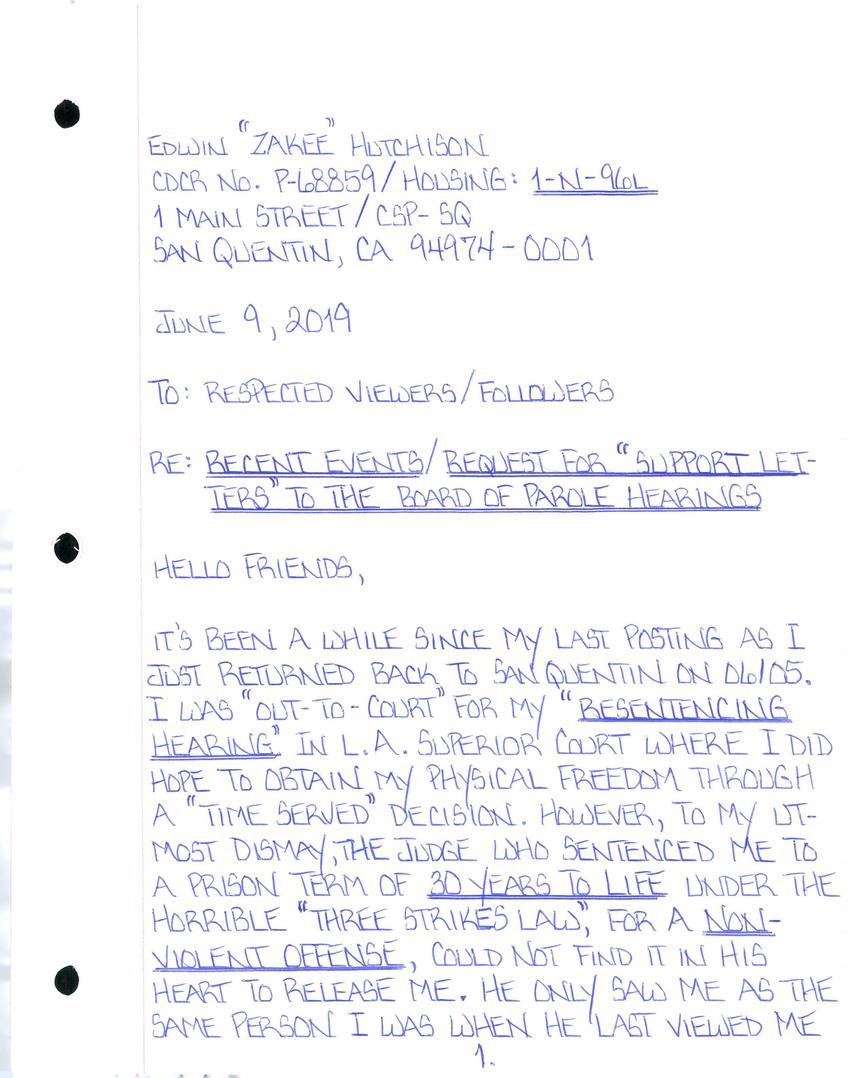 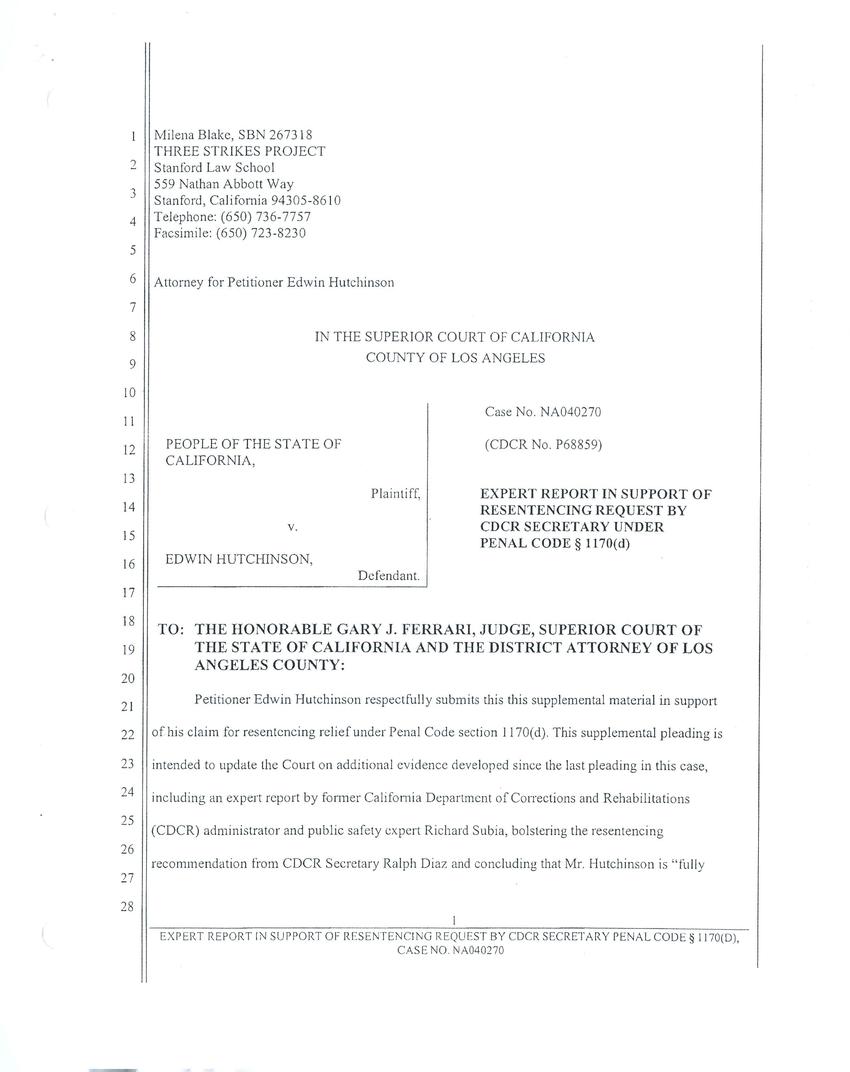 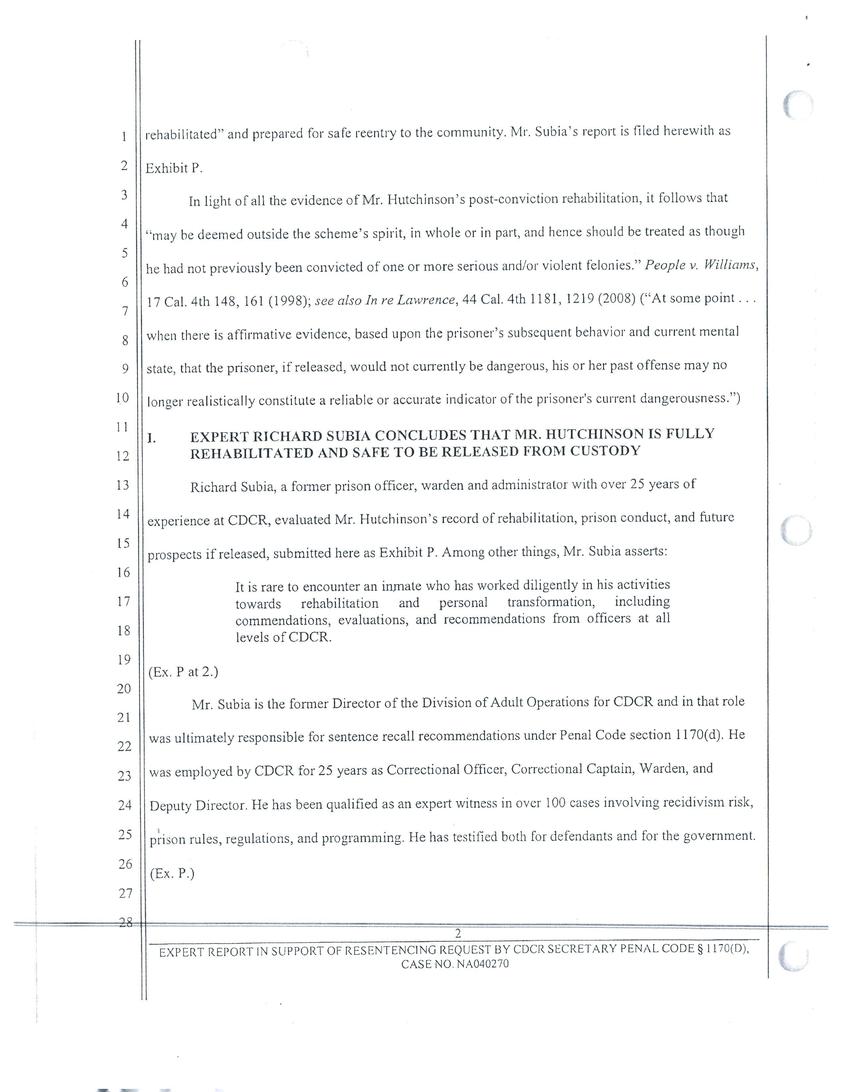 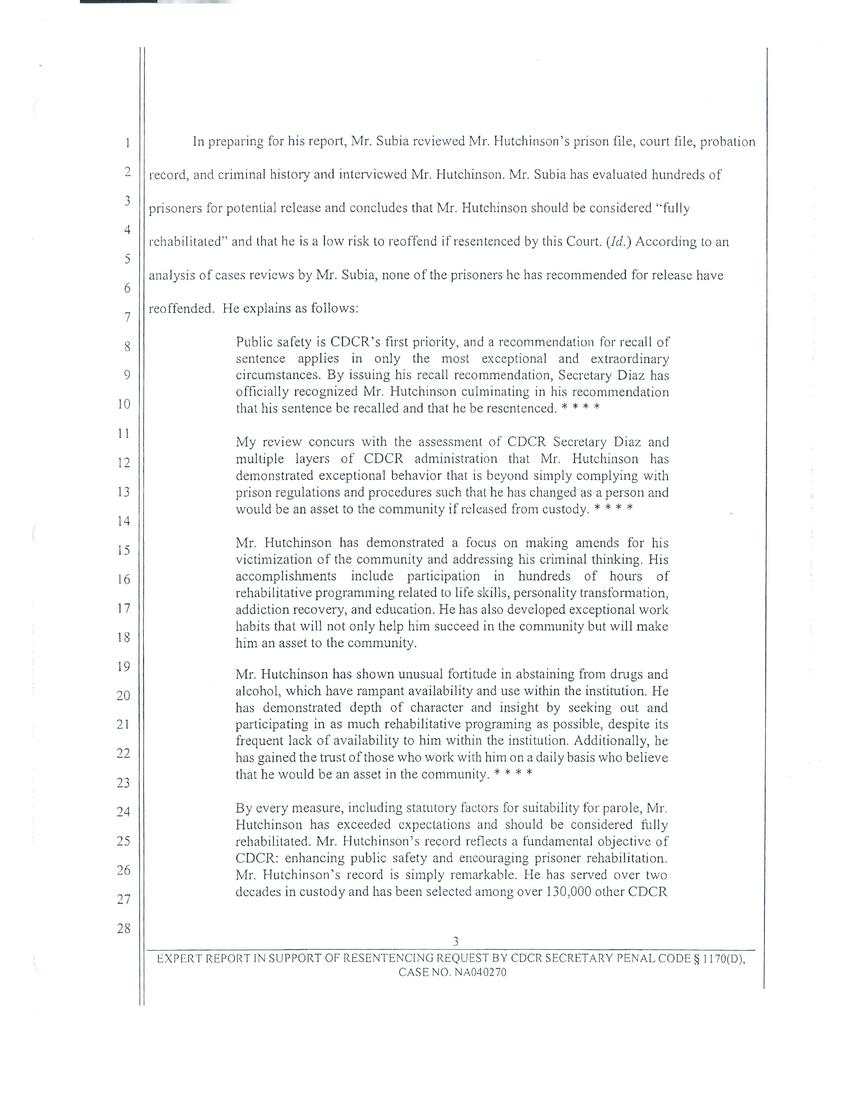 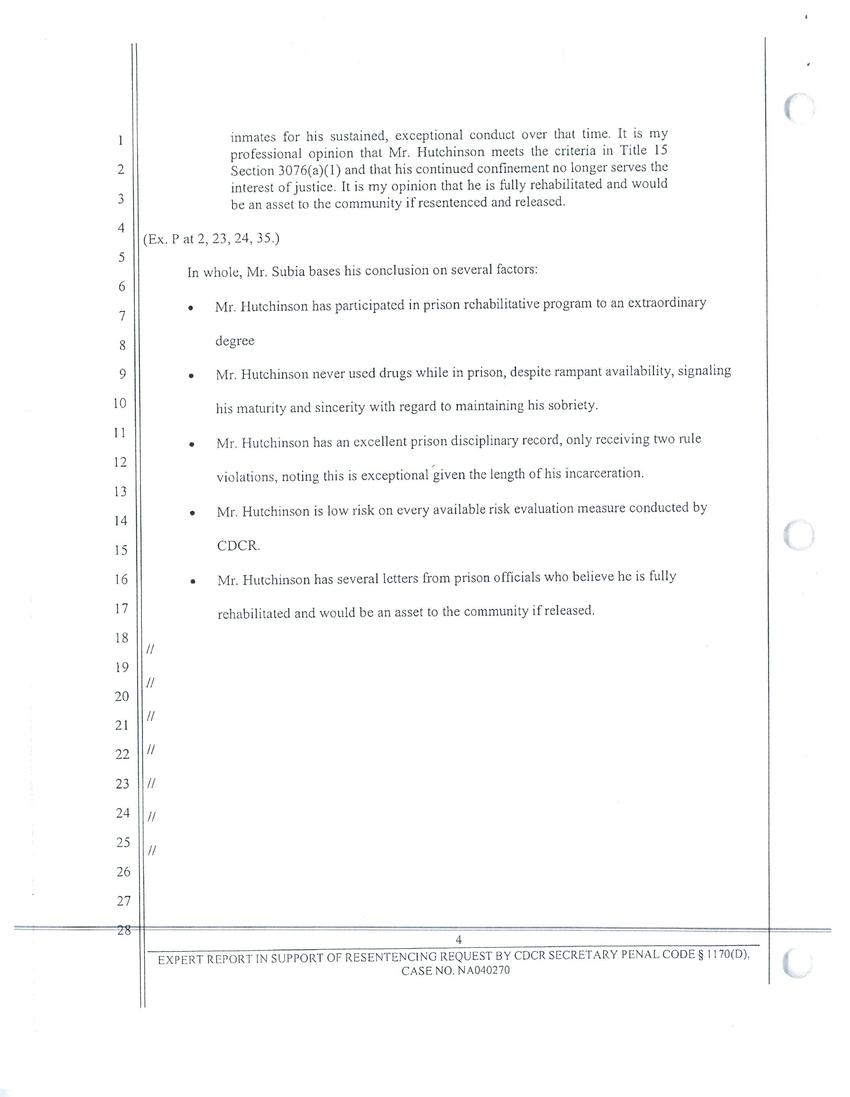 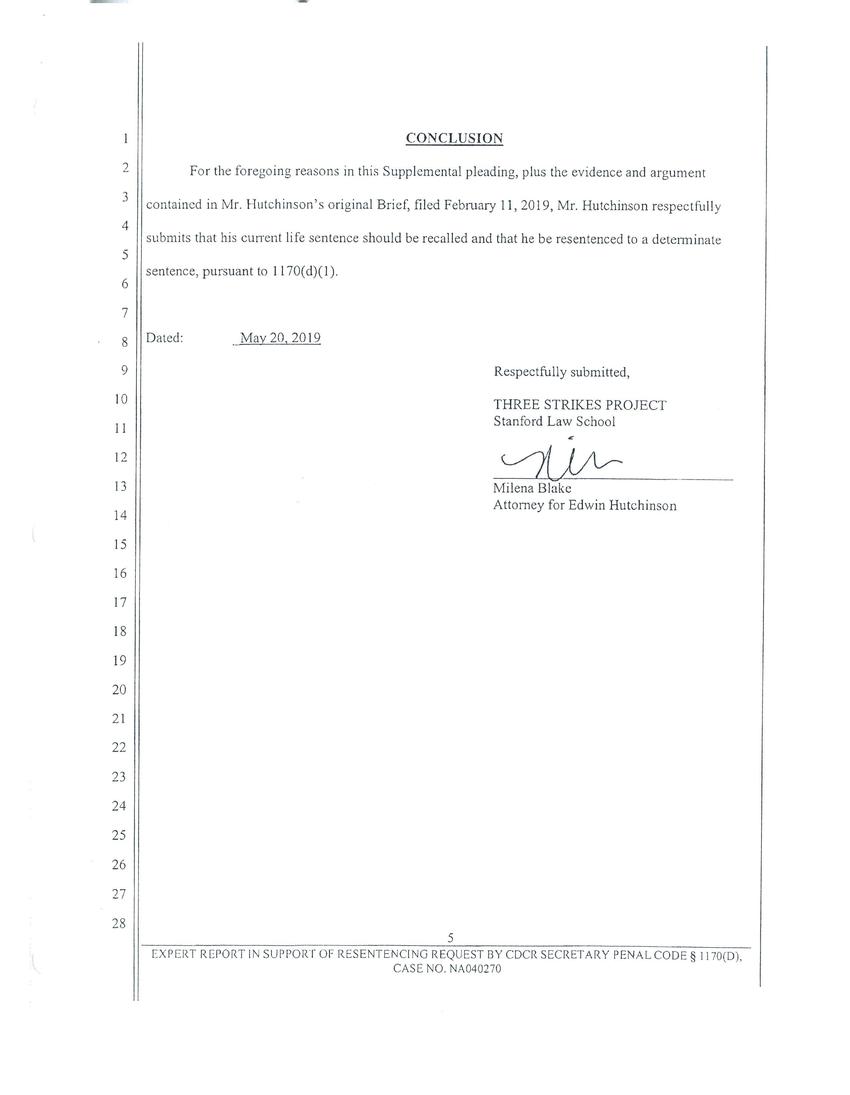 Re: Recent Events / Request for Support Letters to the Board of Parole Hearings

It's been a while since my last posting, as I just returned back to San Quentin on June 5th. I was out of court for my resentencing hearing in LA Superior Court, where I did hope to obtain my physical freedom through a time served decision.

However, to my utmost dismay, the judge who sentenced me to a prison term of 30 years to life under the horrible three strikes law for a nonviolent offense, could not find it in his heart to release me. He only saw me as the same person I was when he last viewed me.

IN THE SUPERIOR COURT OF CALIFORNIA
COUNTY OF LOS ANGELES

PEOPLE OF THE STATE OF CALIFORNIA
Plantiff

TO: THE HONORABLE GARY J. FERRARI, JUDGE, SUPERIOR COURT OF THE STATE OF CALIFORNIA AND THE DISTRICT ATTORNEY OF LOS ANGELES COUNTY:

Petitioner Edwin Hutchinson respectfully submits this supplemental material in support of his claim for resentencing under Penal Code section 1170(d). This supplemental pleading is intended to update the Court on additional evidence developed since the last pleading in this case, including an expert report by former California Department of Corrections and Rehabilitations (CDCR) administrator and public safety expert Richard Sabia, bolstering the resentencing recommendation from CDCR Secretary Ralph Diaz and concluding that Mr. Hutchinson is "Fully rehabilitated" and prepared for safe reentry to the community, Mr. Sabia's report is filled herewith as Exhibit P.

In light of all the evidence of Mr. Hutchinson's post-conviction rehabilitation, it follows that "may be deemed outside the scheme's spirit, in whole or in part, and hence should be treated as though he had not previously been convicted of one or more serious and/or violent felonies." People v. Williams, 17 Cal. 4th 148, 161 (1998); see also In re Lawrence, 44 Cal. 4th 1181, 1219 (2008) ("At some point... when there is affirmative evidence, based upon the prisoner's subsequent behavior and current mental state, that the prisoner, if released, would not currently be dangerous, his or her past offense may no longer realistically constitute a reliable or accurate indicator of the prisoner's current dangerousness.")

1. EXPERT RICHARD SABIA CONCLUDES THAT MR. HUTCHINSON IS FULLY REHABILITATED AND SAFE TO BE RELEASED FROM CUSTODY

Richard Sabia, a former prison officer, warden, and administrator with over 25 years of experience at CDCR, evaluated Mr. Hutchinson's record of rehabilitation, prison conduct, and future prospects if released, submitted here as Exhibit P. Among other things, Mr. Sabia asserts:

It is rare to encounter an inmate who has worked diligently in his activities towards rehabilitation and personal transformation, including commendations, evaluations, and recommendations from officers at all levels of CDCR.

Mr. Sabia is the former Director of the Division of Adult Operations for CDCR and in that role was ultimately responsible for sentence recall recommendations under Penal Code section 1170(d). He was employed by CDCR for 25 years as Correctional Officer, Correctional Captain, Warden, and Deputy Director. He has been qualified as an expert witness in over 100 cases involving recidivism risk, prison rules, regulations, and programming. He has testified both for defendants and for the government.

In preparing for his report, Mr. Sabia reviewed Mr. Hutchinson's prison file, court file, probation record, and criminal history and interviewed Mr. Hutchinson. Mr. Sabia has evaluated hundreds of prisoners for potential release and concludes that Mr. Hutchinson should be considered "fully rehabilitated" and that he is a low risk to reoffend if resentenced by this Court. (Id.) According to an analysis of cases reviews by Mr. Sabia, none of the prisoners he has recommended for release have reoffended. He explains as follows:

Public safety is CDCR's first priority, and a recommendation for recall of sentence applies in only the most exceptional and extraordinary circumstances. By issuing his recall recommendation, Secretary Diaz has officially recognized Mr. Hutchinson culminating in his recommendation that his sentence be realized and that he be resentenced. ****

My review concurs with the assessment of CDCR Secretary Diaz and multiple layers of CDCR administration that Mr. Hutchinson has demonstrated exceptional behavior that is beyond simply complying with prison regulations and procedures such that he has changed as a person and would be an asset to the community of released from custody. ****

Mr. Hutchinson has demonstrated a focus on making amends for his victimization of the community and addressing his criminal thinking. His accomplishments include participation in hundreds of hours of rehabilitative programming related to life skills, personality transformation, addiction recovery, and education. He has also developed exceptional work habits that will not only help him succeed in the community but will make him an asset to the community.

Mr. Hutchinson has shown unusual fortitude in abstaining from drugs and alcohol, which have rampant availability and use within the institution. He has demonstrated depth of character and insight by seeking out and participating in as much rehabilitative programming as possible, despite its frequent lack of availability to him within the institution. Additionally, he has gained the trust of those who work with him on a daily basis who believe that he would be an asset in the community. ****

By every measure, including statutory factors for suitability for people, Mr. Hutchinson has exceeded expectations and should be considered fully rehabilitated. Mr. Hutchinson's record reflects a fundamental objective of CDCR: enhancing public safety and encouraging prisoner rehabilitation. Mr. Hutchinson's record is simply remarkable. He has served over two decades in custody and has been selected among over 130,000 other CDCR inmates for his sustained, exceptional conduct over that time. It is my professional opinion that Mr. Hutchinson meets the criteria in Title 15 Section 3076(a)(1) and that his continued confinement no longer serves the interest of justice. It is my opinion that he is fully rehabilitated and would be an asset to the community if resentenced and released.

In whole, Mr. Subia bases his conclusion on several factors:
*Mr. Hutchinson has participated in prison rehabilitative program to an extraordinary degree
*Mr. Hutchinson never used drugs while in prison, despite rampant availability, signaling his maturity and sincerity with regard to maintaining his sobriety.
*Mr. Hutchinson has an excellent prison disciplinary record, only receiving two rule violations, noting this is exceptional given the length of his incarceration.
*Mr. Hutchinson is low risk on every available risk evaluation measure conducted by CDCR.
*Mr. Hutchinson has several letters from prison officials who believe he is fully rehabilitated and would be an asset to the community if released.

CONCLUSION
For the foregoing reasons in this Supplemental pleading, plus the evidence and argument contained in Mr. Hutchinson's original Brief, filed February 11, 2019, Mr. Hutchinson respectfully submits that his current life sentence should be recalled and that he be resentenced to a determinate sentence, pursuant to 1170(d)(1).

I, COURTNEY GARMA, declare that I am, and was at the time of the service hereinafter mentioned, at least 18 years of age and not a party of the above-entitled action. My business address is 559 Nathan Abbot Way, Stanford, CA, in Santan Cara County.

On May 20, 2019, I served the foregoing EXPERT REPORT IN SUPPORT OF RESENTENCING REQUEST BY CDCR SECRETARY UNDER PENAL CODE Section 1170(d) by depositing copies in the United States mail at Stanford, California, with postage prepaid thereon, and addressed as follows: