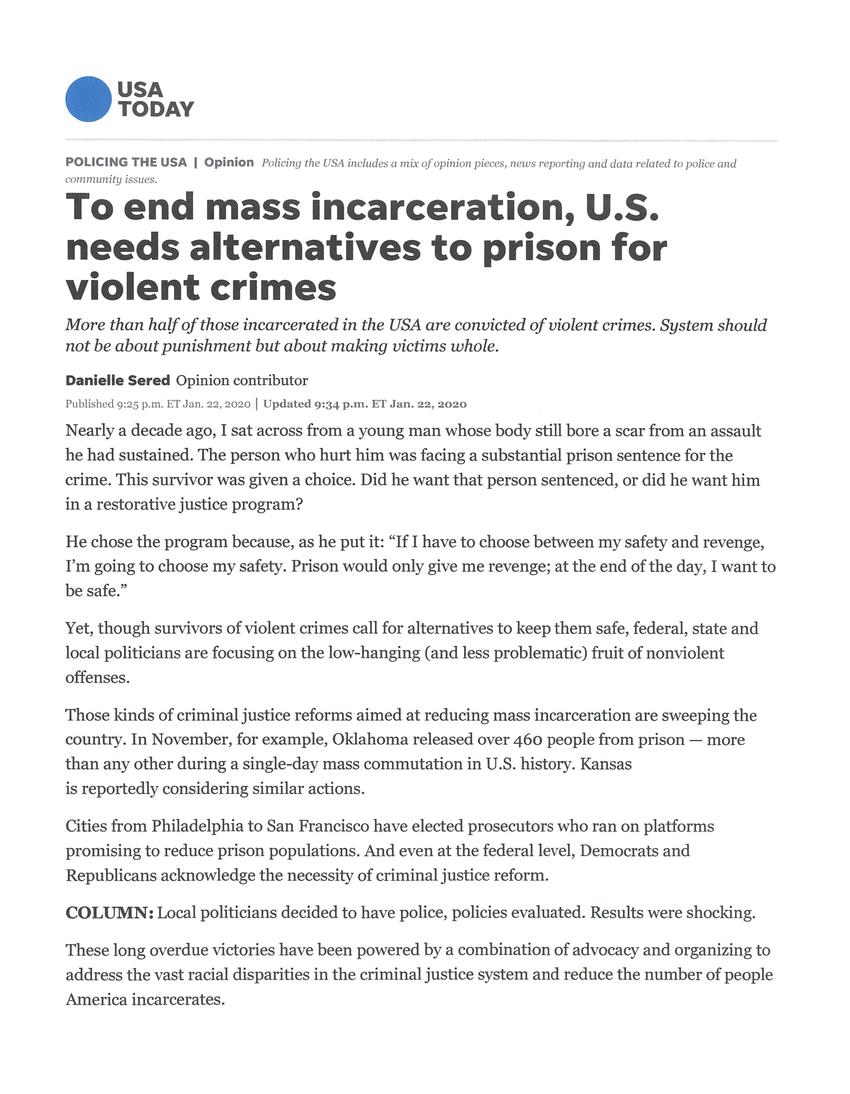 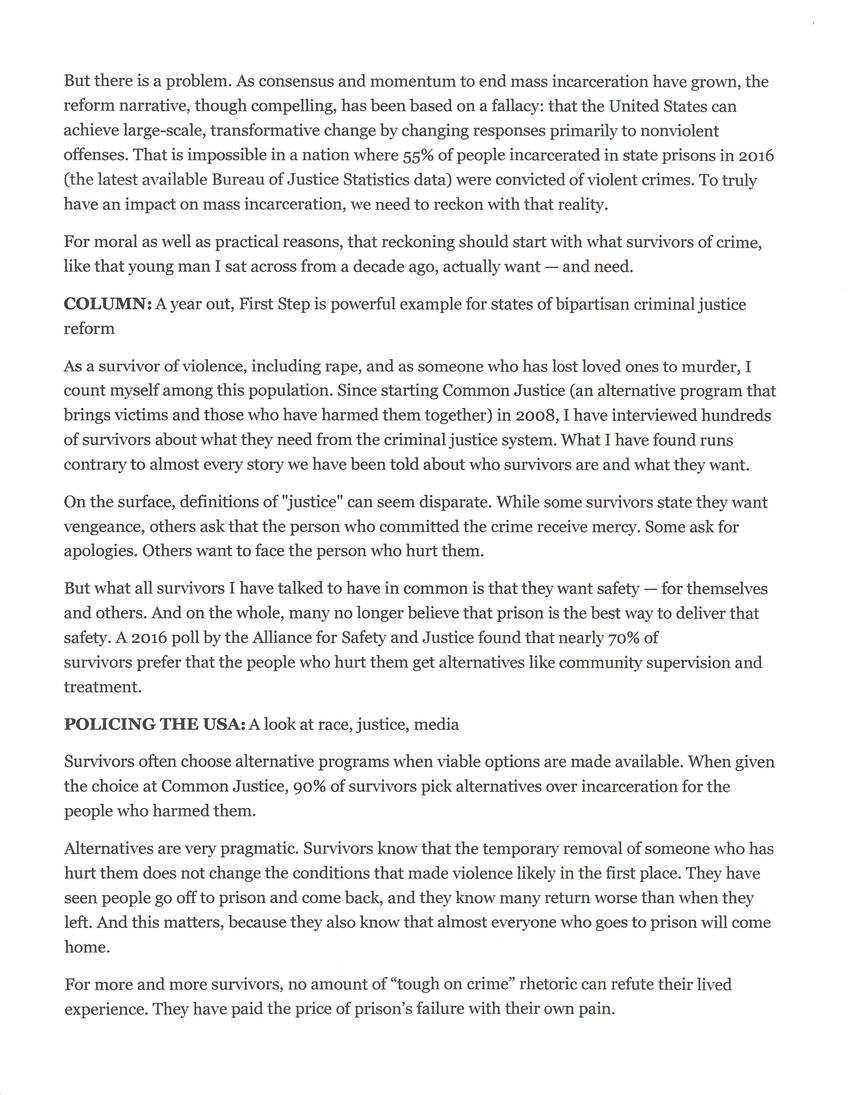 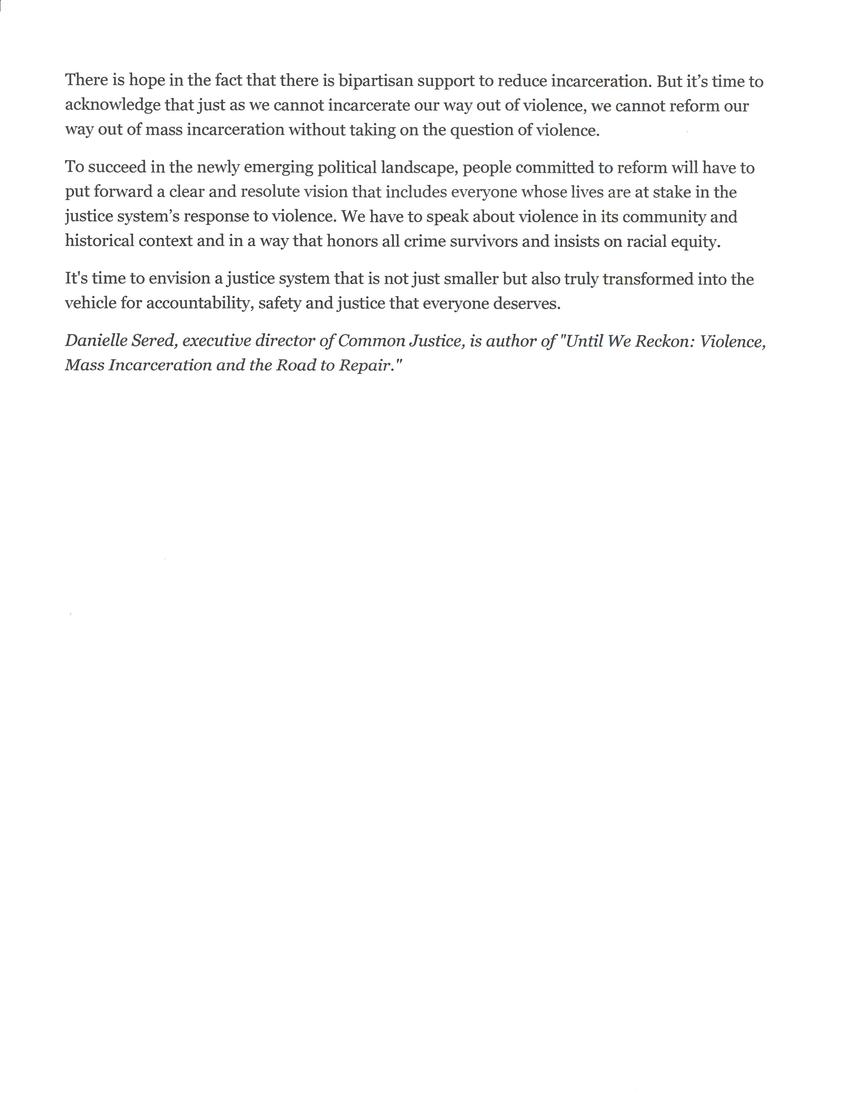 POLICING THE USA| Opinion Policing the USA includes a mix of opinion pieces, news reporting and data related to police and community issues.

More than half of those incarcerated in the USA are convicted of violent crimes. System should not be about punishment but about making victims whole.

Nearly a decade ago, I sat across from a young man whose body still bore a scar from an assault he had sustained. The person who hurt him was facing a substantial prison sentence for the crime. This survivor was given a choice. Did he want that person sentenced, or did he want him in a restorative justice program?

He chose the program because, as he put it: “If I have to choose between my safety and revenge, I’m going to choose my safety. Prison would only give me revenge; at the end of the day, I want to be safe.”

Yet, though survivors of violent crimes call for alternatives to keep them safe, federal, state and local politicians are focusing on the low-hanging (and less problematic) fruit of nonviolent offenses.

Those kinds of criminal justice reforms aimed at reducing mass incarceration are sweeping the country. In November, for example, Oklahoma released over 460 people from prison — more than any other during a single-day mass commutation in U.S. history. Kansas is reportedly considering similar actions.

Cities from Philadelphia to San Francisco have elected prosecutors who ran on platforms promising to reduce prison populations. And even at the federal level, Democrats and Republicans acknowledge the necessity of criminal justice reform.

These long overdue victories have been powered by a combination of advocacy and organizing to address the vast racial disparities in the criminal justice system and reduce the number of people America incarcerates.

But there is a problem. As consensus and momentum to end mass incarceration have grown, the reform narrative, though compelling, has been based on a fallacy: that the United States can achieve large-scale, transformative change by changing responses primarily to nonviolent offenses. That is impossible in a nation where 55% of people incarcerated in state prisons in 2016 (the latest available Bureau of Justice Statistics data) were convicted of violent crimes. To truly have an impact on mass incarceration, we need to reckon with that reality.

For moral as well as practical reasons, that reckoning should start with what survivors of crime, like that young man I sat across from a decade ago, actually want — and need.

COLUMN: A year out, First Step is powerful example for states of bipartisan criminal justice reform

As a survivor of violence, including rape, and as someone who has lost loved ones to murder, I count myself among this population. Since starting Common Justice (an alternative program that brings victims and those who have harmed them together) in 2008, I have interviewed hundreds of survivors about what they need from the criminal justice system. What I have found runs contrary to almost every story we have been told about who survivors are and what they want.

On the surface, definitions of "justice" can seem disparate. While some survivors state they want vengeance, others ask that the person who committed the crime receive mercy. Some ask for apologies. Others want to face the person who hurt them.

But what all survivors I have talked to have in common is that they want safety — for themselves and others. And on the whole, many no longer believe that prison is the best way to deliver that safety. A 2016 poll by the Alliance for Safety and Justice found that nearly 70% of survivors prefer that the people who hurt them get alternatives like community supervision and treatment.

POLICING THE USA: A look at race, justice, media

Survivors often choose alternative programs when viable options are made available. When given the choice at Common Justice, 90% of survivors pick alternatives over incarceration for the people who harmed them.

Alternatives are very pragmatic. Survivors know that the temporary removal of someone who has hurt them does not change the conditions that made violence likely in the first place. They have seen people go off to prison and come back, and they know many return worse than when they left. And this matters, because they also know that almost everyone who goes to prison will come home.

For more and more survivors, no amount of “tough on crime” rhetoric can refute their lived experience. They have paid the price of prison’s failure with their own pain.

To succeed in the newly emerging political landscape, people committed to reform will have to put forward a clear and resolute vision that includes everyone whose lives are at stake in the justice system’s response to violence. We have to speak about violence in its community and historical context and in a way that honors all crime survivors and insists on racial equity.

It's time to envision a justice system that is not just smaller but also truly transformed into the vehicle for accountability, safety and justice that everyone deserves.

Danielle Sered, executive director of Common Justice, is author of "Until We Reckon: Violence, Mass Incarceration and the Road to Repair."