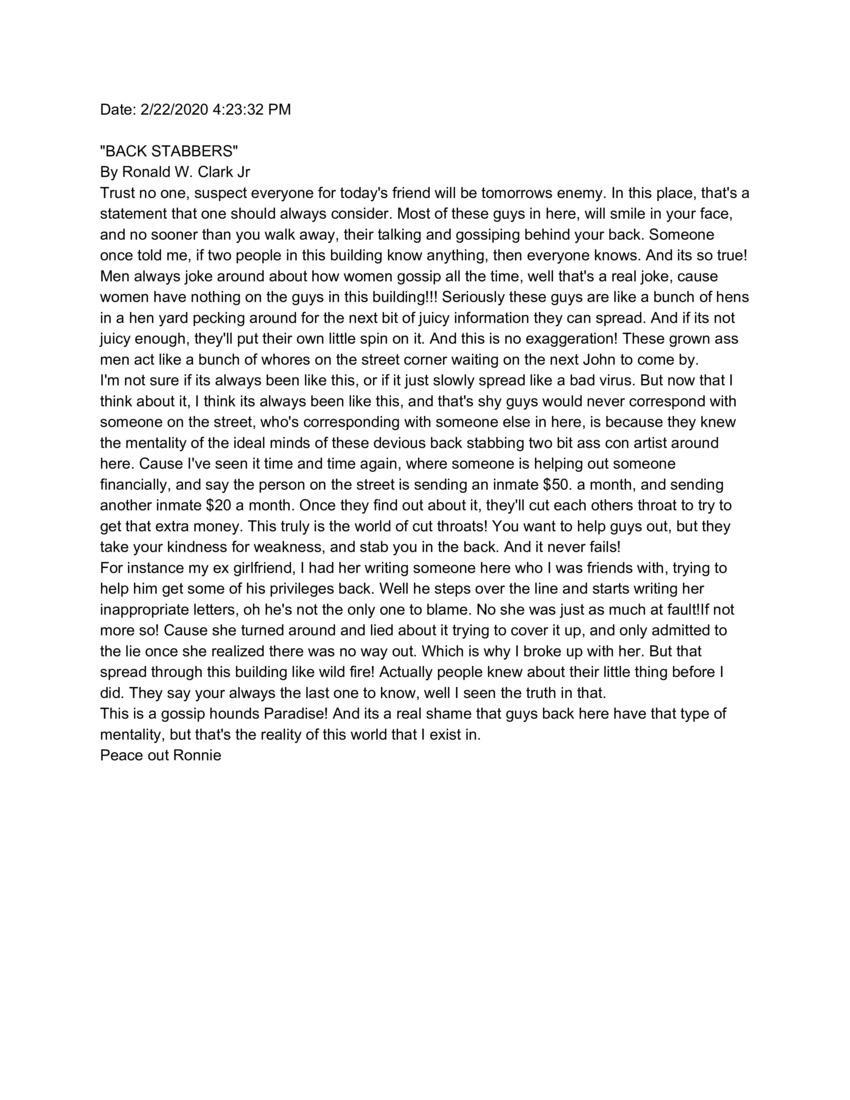 "BACK STABBERS"
By Ronald W. Clark Jr
Trust no one, suspect everyone for today's friend will be tomorrows enemy. In this place, that's a statement that one should always consider. Most of these guys in here, will smile in your face, and no sooner than you walk away, their talking and gossiping behind your back. Someone once told me, if two people in this building know anything, then everyone knows. And its so true! Men always joke around about how women gossip all the time, well that's a real joke, cause women have nothing not eh guys in this building!!!! Seriously these guys are like a bunch of hens in a hen yard pecking around for the next bit of juicy information they can spread. And if its not juicy enough, they'll put their own spin on it. And this is no exaggeration! These grown ass men act like a bunch of whores on the street corner waiting on the next John to come by. I'm not sure if its always been like this, or if it just slowly spread like a bad virus. But now that I think about it, I think its always been like this, and that's shy guys would never correspond with someone on the street, who's corresponding with someone else in here, is because they knew the mentality of the ideal minds of these devious back stabbing two bit ass con artist around here. Cause I've seen it time and time again, where someone is helping someone financially, and say the person on the street is sending an inmate $50. a month, and sending another inmate $20 a month. Once they find out about it, they'll cut each others throat to try to get that extra money. This truly is the world of cut throats! You want to help guys out, but they take your kindness for weakness, and stab you in the back. And it never fails!
For instance my ex girlfriend, I had her writing someone here who I was friends with, trying to help him get some of his privileges back. Well he steps over the line and starts writing her inappropriate letters, oh he's not the only one to blame. No she was just as much at fault!If not more so! Cause she turned around and lied about covering it up, and only admitted the lie once she realized there was no way out. Which is why I broke up with her. But that spread through this building like wild fire! Actually people knew about their little thing before I did. They say your always the last one to know, well I seen the truth in that.
This is a gossip hounds Paradise! And its a real shame that guys back here have that type of mentality, but that's the reality of this world that I exist in.
Peace out Ronnie