Maybe they should kill me now? 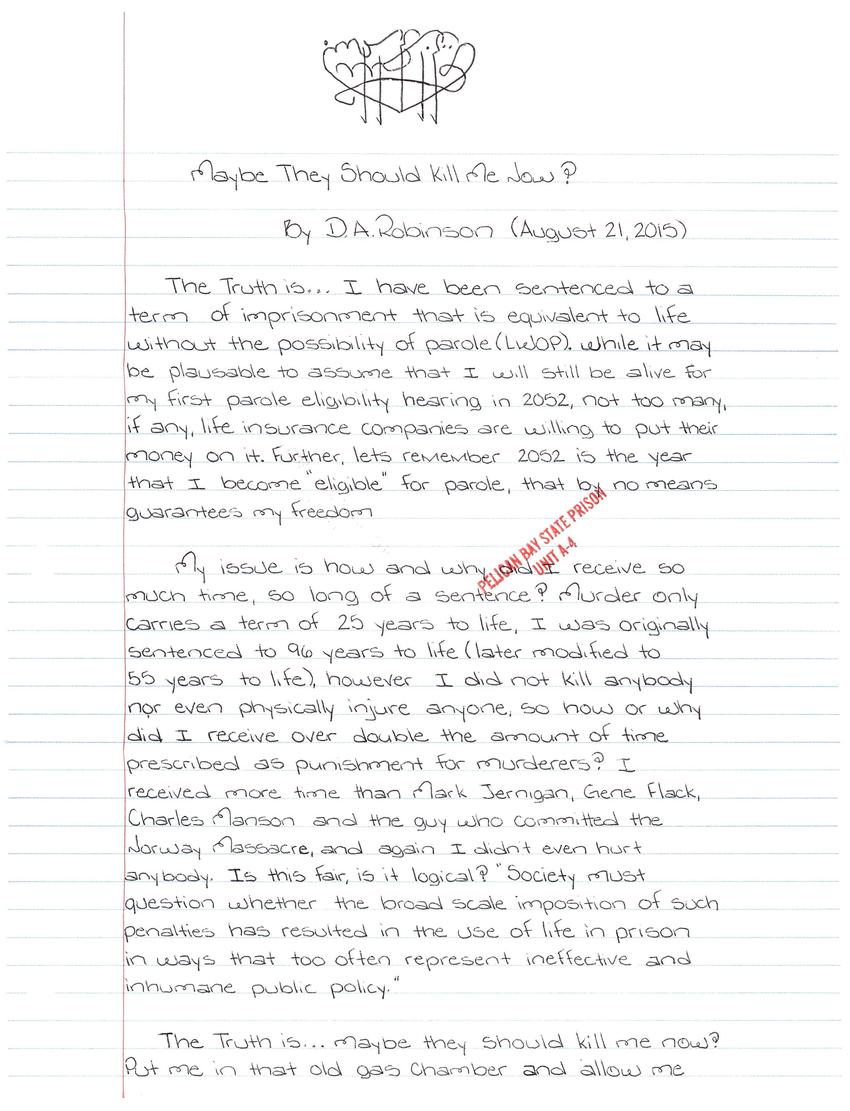 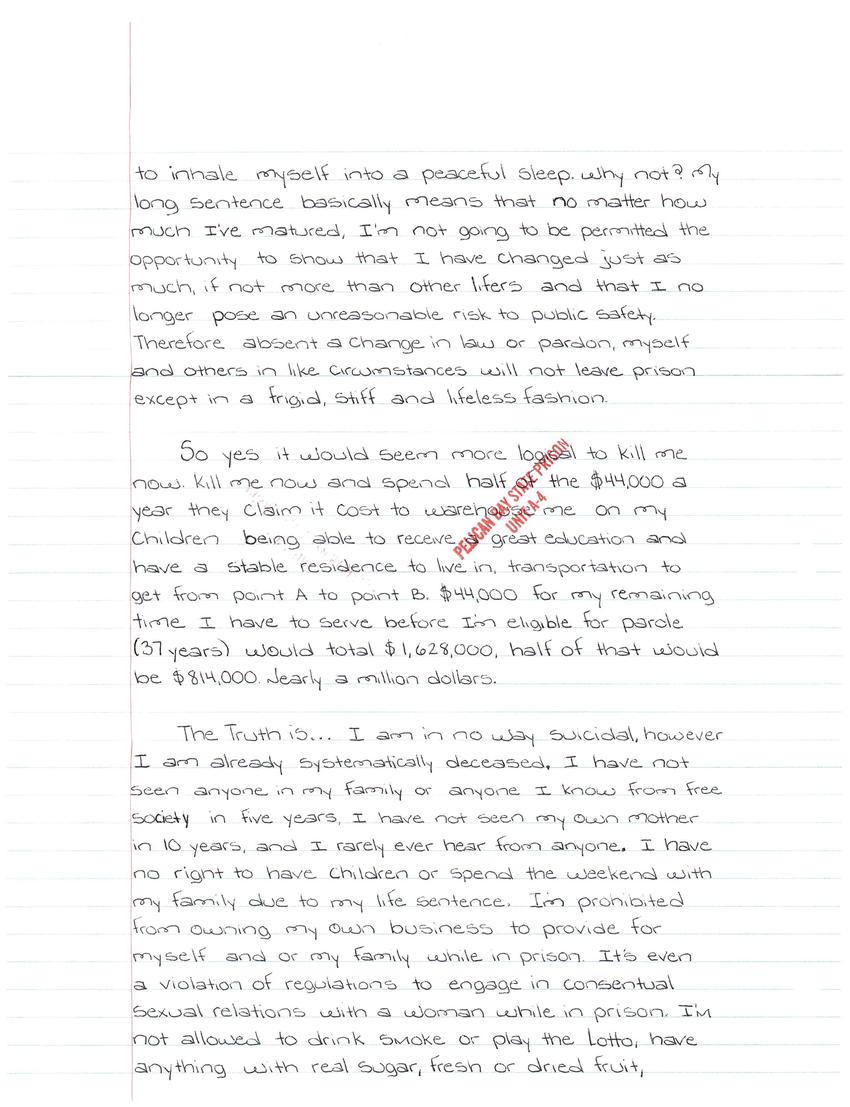 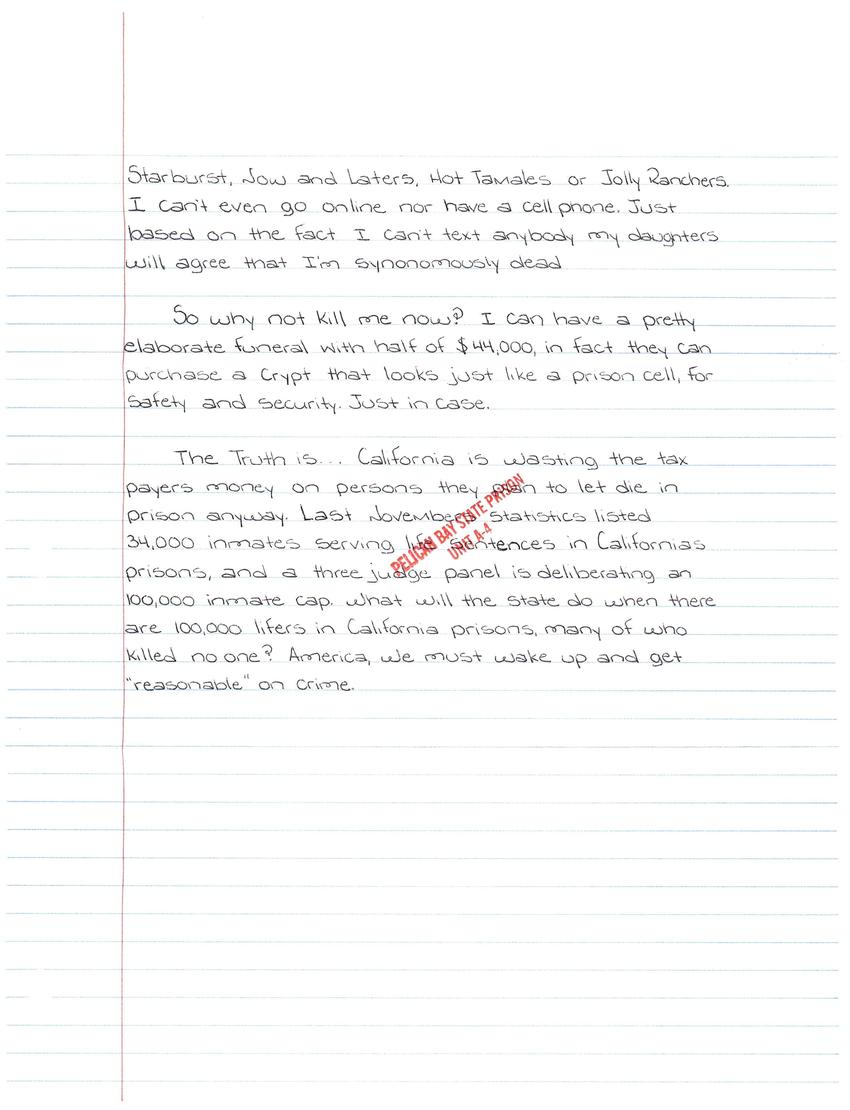 The Truth is... I have been sentenced to a term of imprisonment that is equivalent to life without possibility of parole (LWOP). While it may be plausible to assume that I will still be alive for my first parole eligibility hearing in 2052, not too many, if any, life insurance companies are willing to put their money on it. Further, let's remember 2052 is the year that I become "eligible" for parole. That by no means guarantees my freedom.

My issue is how and why did I receive so much time, so long of a sentence? Murder only carries a term of 25 years to life. I was originally sentenced to 96 years to life (later modified to 55 years to life). However, I did not kill anybody nor even physically injure anyone. So how or hwy did I receive over double the amount of time prescribed as punishment for murderers? I received more time than Mark Jernigan, Gene Flack, Charles Manson, and the guy who committed the Norway Massacre, and, again, I didn't even hurt anybody. Is this fair? Is this logical? "Society must question whether the broad scale of imposition of such penalties has resulted in the use of life in prison in ways that too often represent ineffective and inhumane public policy."

The Truth is... maybe they should kill me now? Put me in that old gas chamber and allow me to inhale myself into a peaceful sleep. Why not? My long sentence basically means that no matter how much I've matured, I'm not going to be permitted the opportunity to show that I have changed just as much, if not more, than other lifers and that I no longer pose an unreasonable risk to public safety. Therefore absent a change in law or pardon, myself and others in like circumstances will not leave prison except in a frigid, stiff and lifeless fashion.

So, yes, it would seem more logical to kill me now. Kill me now and spend half of the $44,000 year they claim it costs to warehouse me on my children being able to receive a great education and have a stable residence to live in, transportation to get from point A to point B. $44,000 for my remaining time I have to serve before I'm eligible for parole (37 years) would total $1,628,000, half of that would be $814,000. Nearly a million dollars.

The Truth is... I am in no way suicidal, however I am already systematically deceased. I have not seen anyone in my family or anyone I know from free society in five years. I have not seen my own mother in 10 years, and I rarely ever hear from anyone. I have no right to have children or spend the weekend with my family due to my life sentence. I'm prohibited from owning my own business to provide for myself and/or my family while in prison. It's even a violation of regulations to engage in consensual sexual relations with a woman in prison. I'm not allowed to drink, smoke, or play the lotto, have anything with real sugar, fresh or dried fruit, Starburst, Sow and Laters, Hot Tamales or Jolly Rangers. I can't even go online nor have a cellphone. Just based on the fact I can't text anybody, my daughters will agree that I'm synonymously dead.

So why not kill me now? I can have a pretty elaborate funeral with half of $44,000. In fact, they can purchase a crypt that looks just like a prison cell, for safety and security. Just in case.

The Truth is... California is wasting the taxpayers' money on persons they plan to let die in prison anyway. Last November statistics listed 34,000 inmates serving life sentences in California's prisons and a three judge panel is deliberating an 100,000 inmate cap. What will the state do when there are 100,000 lifers in California prisons, many of who killed no one? America, we must wake up and get "reasonable" on crime.