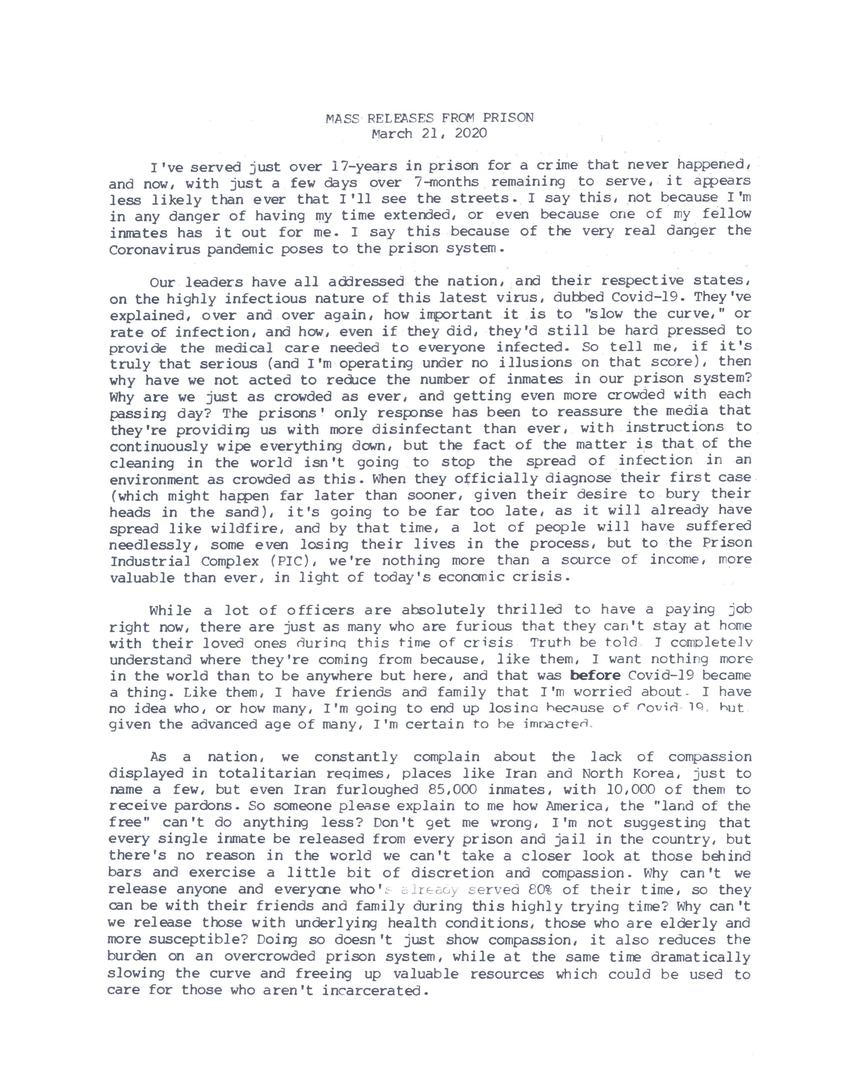 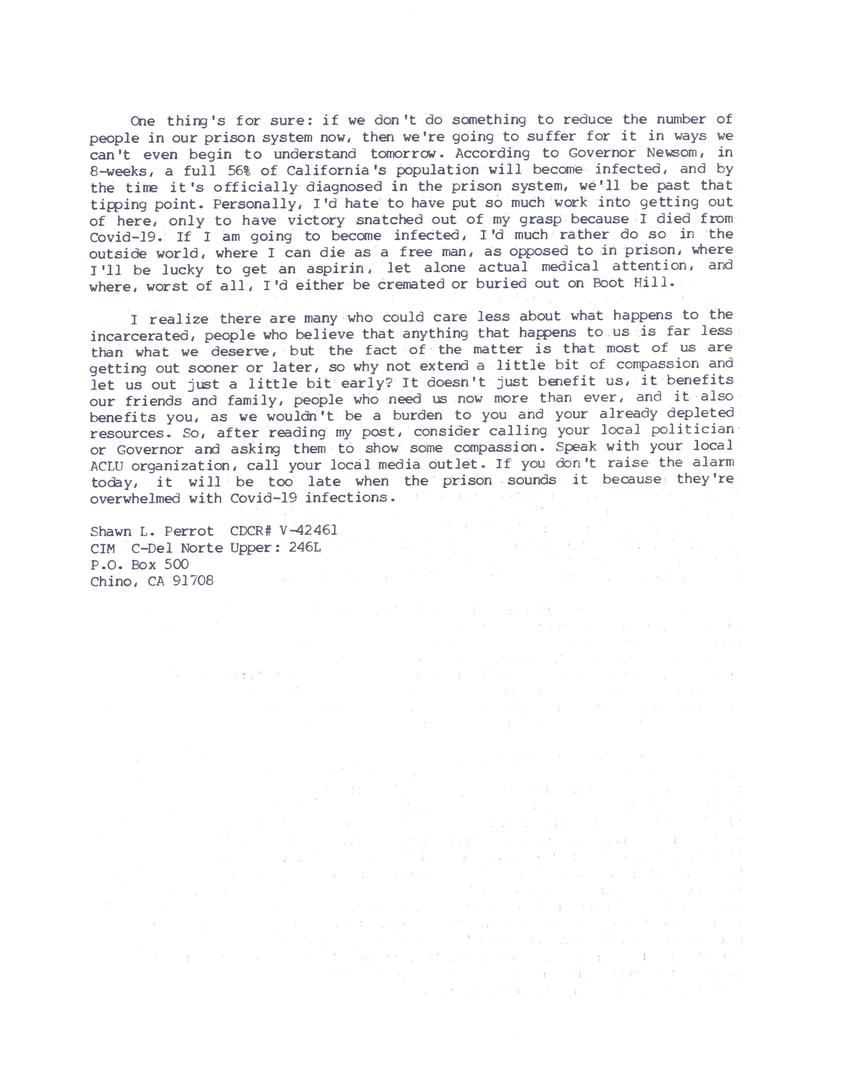 I've served just over 17-years in prison for a crime that never happened, and now, with just a few days over 7-months remaining to serve, it appears less likely that ever that I'll see the streets. I say this, not because I'm in any danger of having my time extended, or even because one of my fellow inmates has it out for me. I say this because of the very real danger the Coronavirus pandemic poses to the prison system.

Our leaders have all addressed the nation, and their respective states, on the highly infectious nature of this latest virus, dubbed COVID-19. They've explained, over and over again, how important it is to "slow the curve," or rate of infection, and how, even if they did, they'd still be hard pressed to provide the medical care needed to everyone infected. So tell me, if it's truly that serious (and I'm operating under no illusions on that score), then why have we not acted to reduce the number of inmates in our prison systems? Why are we just as crowded as ever, and getting even more crowded with each passing day? The prisons' only response as been to reassure the media that they're providing us with more disinfectant than ever, with instructions to continuously wipe everything down, but the fact of the matter is that all the cleaning in the world isn't going to stop the spread of infection in an environment as crowded as this. When they officially diagnose their first case (which might happen far later than sooner, given their desire to bury their heads in the sand), it's going to be far too late, as it will already have spread like wildfire, and by that time, a lot of people will have suffered needlessly, some even losing their lives in the process, but to the Prison Industrial Complex (PIC), we're nothing more than a source of income, more valuable than ever, in light of todays' economic crisis.

While a lot of officers are absolutely thrilled to have a paying job right now, there are just as many who are furious that they can't stay at home with their loved ones during this time of crisis. Truth be told I completely understand where they're coming from because, like them, I want nothing more in the world than to be anywhere but here, and that was before COVID-19 became a thing. Like them, I have friends and family that I'm worried about. I have no idea who, or how many, I'm going to end up losing because of COVID-19, but given the advanced age of many, I'm certain to be impacted.

As a nation, we constantly complain about the lack of compassion displayed in totalitarian regimes, places like Iran and North Korea, just to name a few, but even Iran furloughed 85,000 inmates, with 10,000 of them to receive pardons. So someone please explain to me how America, the "land of the free" can't do anything less? Don't get me wrong, I'm not suggesting that every single inmate be released from every prison and jail in the country, but there's no reason in the world we can't take a closer look at those behind bars and exercise a little bit of discretion and compassion. Why can't we release anyone and everyone who's already served 80% of their time, so they can be with their friends and family during this highly trying time? Why can't we release those with underlying health conditions, those who are elderly and more susceptible? Doing so doesn't just show compassion, it also reduces the burden on an overcrowded prison system, while at the same time dramatically slowing the curve and freeing up valuable resources which could be used to care for those who aren't incarcerated.

One thing's for sure: if we don't do something to reduce the number of people in our prison system now, then we're going to suffer for it in ways we can't even begin to understand tomorrow. According to Governor Newsom, in 8 weeks, a full 56% of California's population will become infected, and by the time it's officially diagnosed in the prison system, we'll be past that tipping point. Personally, I'd hate to have put so much work into getting out of here, only to have victory snatched out of my grasp because I died from COVID-19. If I am going to become infected, I'd much rather do so in the outside world, where I can die as a free man, as opposed to in prison, where I'll be lucky to get an aspirin, let alone actual medical attention, and where, worst of all, I'd either be cremated or buried out on Boot Hill.

I realize there are many who could care less about what happens to the incarcerated, people who believe that anything that happens to us is far less than what we deserve, but the fact of the matter is that most of us are getting out sooner or later, so why not extend a little bit of compassion and let us out just a little bit early? It doesn't just benefit us, it benefits our friends and family, people who need us now more than ever, and it also benefits you, as we wouldn't bye a burden to you and your already depleted resources. So, after reading my post, consider calling your local politician or Governor and asking them to show some compassion. Speak with your local ACLU organization, call your local media outlet. If you don't raise the alarm today, it will be too late when the prison sounds it because they're overwhelmed with COVID-19 infections.

I have watched and listened to an attorney fight tooth and nail for her clients through this COVID-19 ordeal. She took the fight to the Washington State Supreme Court... and won. She was able to get a motion passed that keeps inmates from having to appear in crowded courtrooms for every piddling motion to continue that is going to be required during this. She is on the phone with every client twice a week asking about their health, if they have seen or heard of any cases or people showing symptoms. She is pushing for early release, bail hearings, and compassionate release for those in the more vulnerable groups. There are people who genuinely care who are fighting for human rights through this. I want you to have hope.

So, I changed careers again. I am a Paralegal for a criminal defense attorney. She mostly handles Class A Felony cases and I adore the work. I get to see the best and the worst of the criminal justice system. It is really fascinating. My empathy and compassion for the accused serves me well in this field. Apparently that is not a teachable trait. Who knew?

It really has been over 17 years. I still can’t believe I have crows feet next to my eyes when I smile. My husband has a couple gray hairs in his stubble. My oldest is a little over 3 years from high school graduation, my middlest (made up word) is awkwardly between child and teen, and my youngest will literally be half grown next month. And I’m not quite ready to grow up myself.

I hope you are able to find a way to get that early release. Take care of yourself in the meantime. Wash your hands constantly. Avoid people. Don’t touch things... and other impossible recommendations. 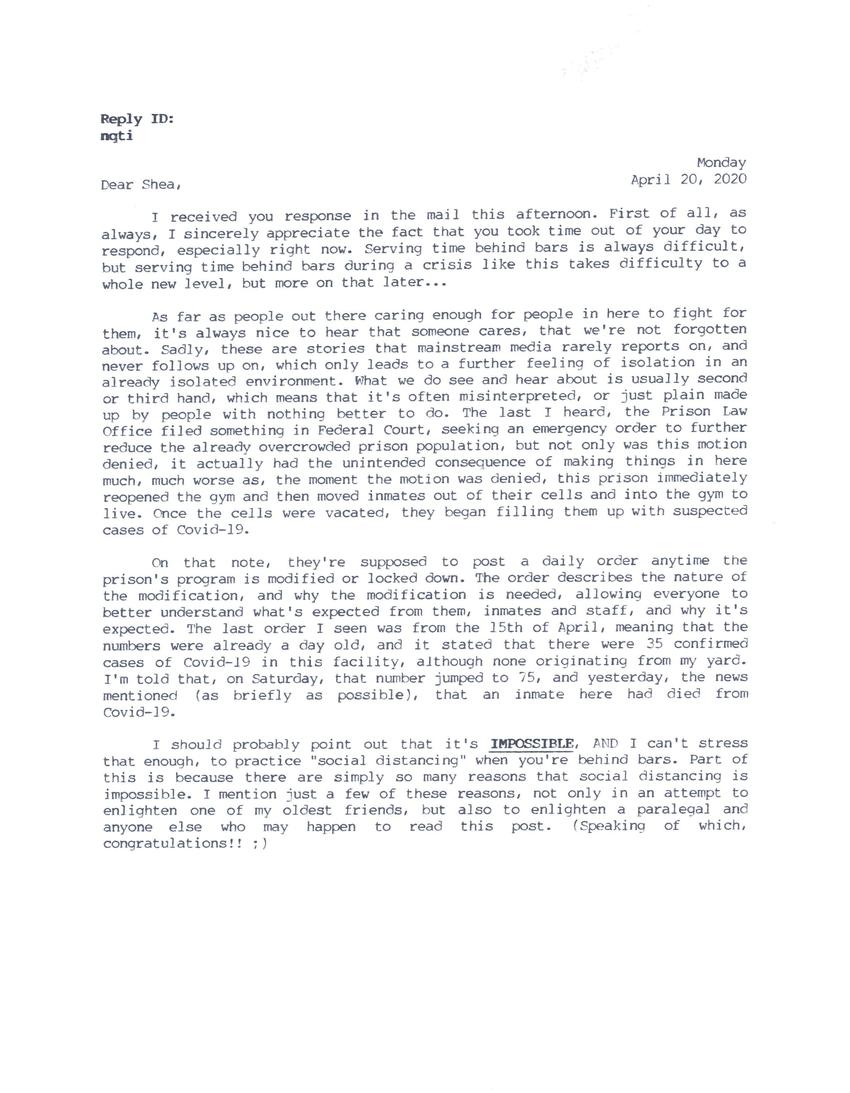 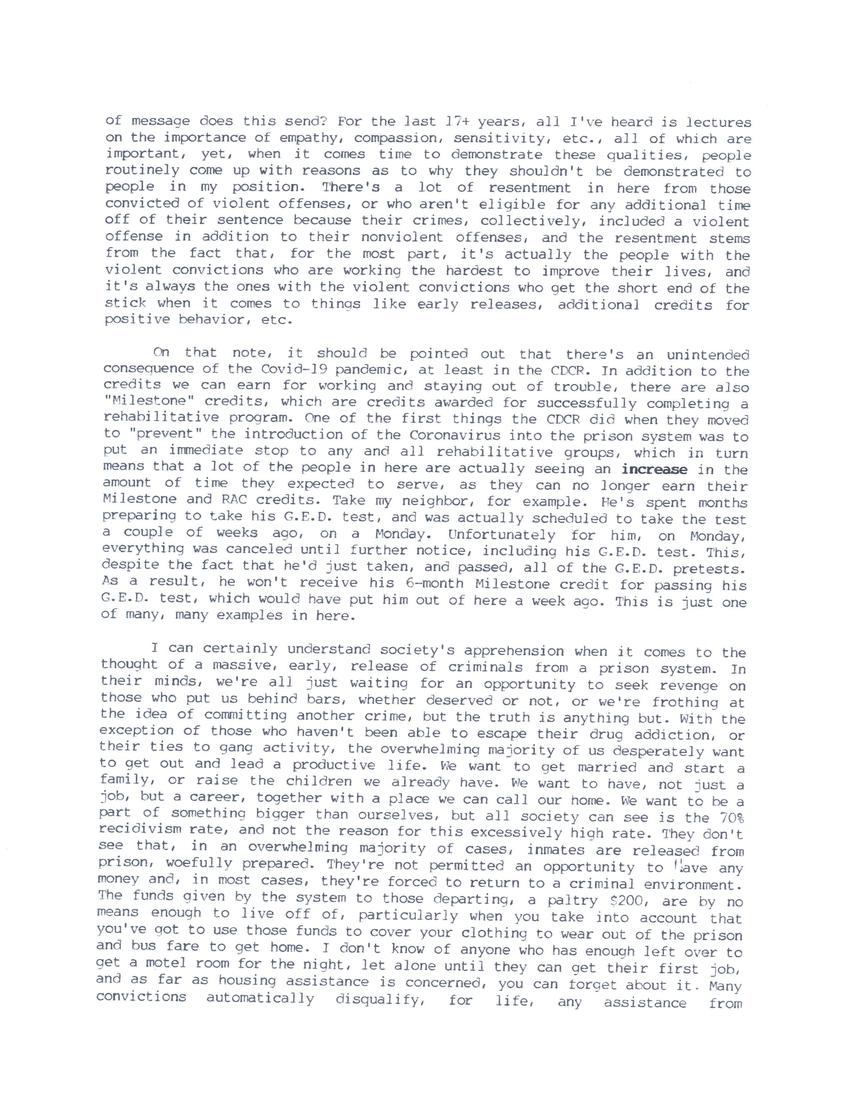 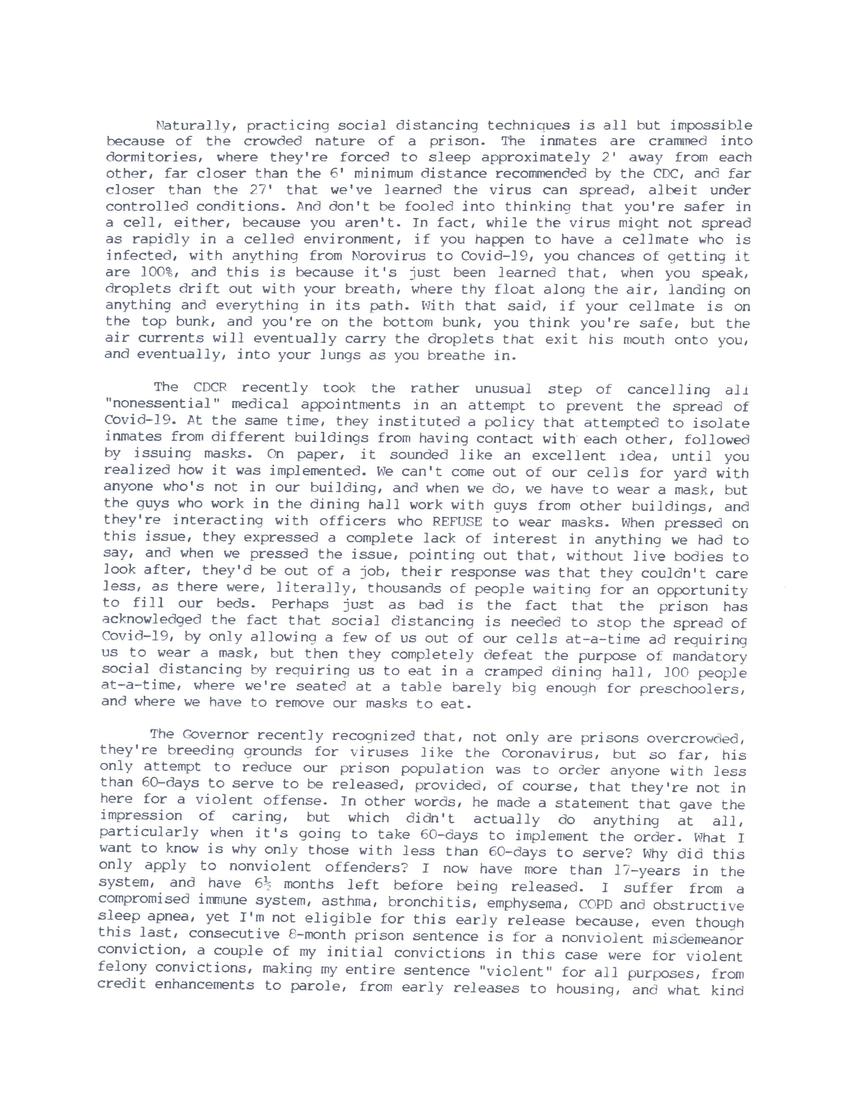 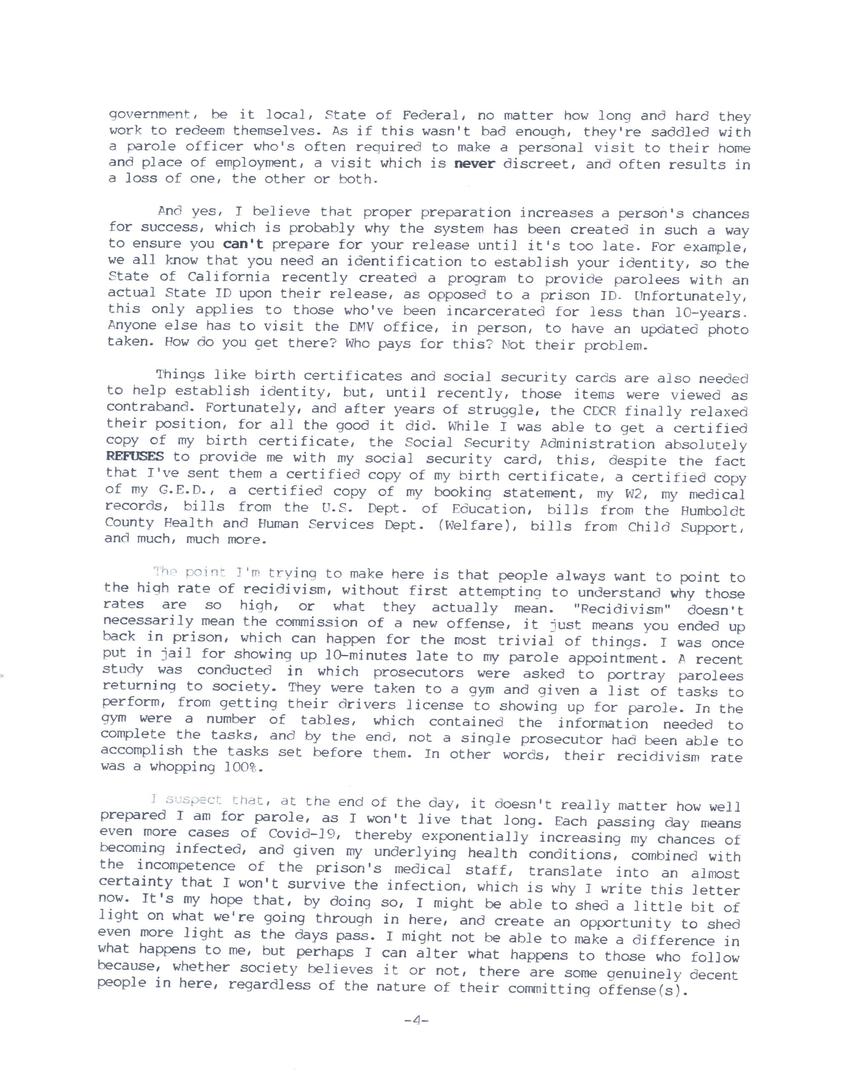 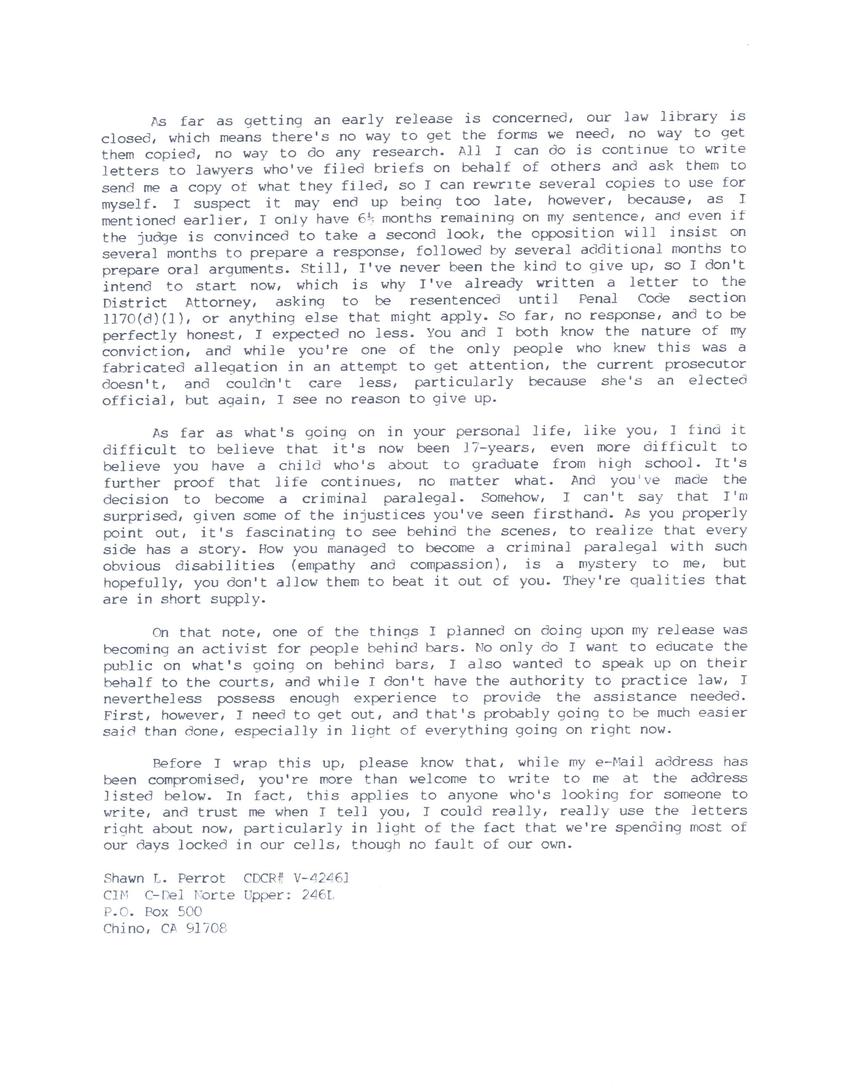