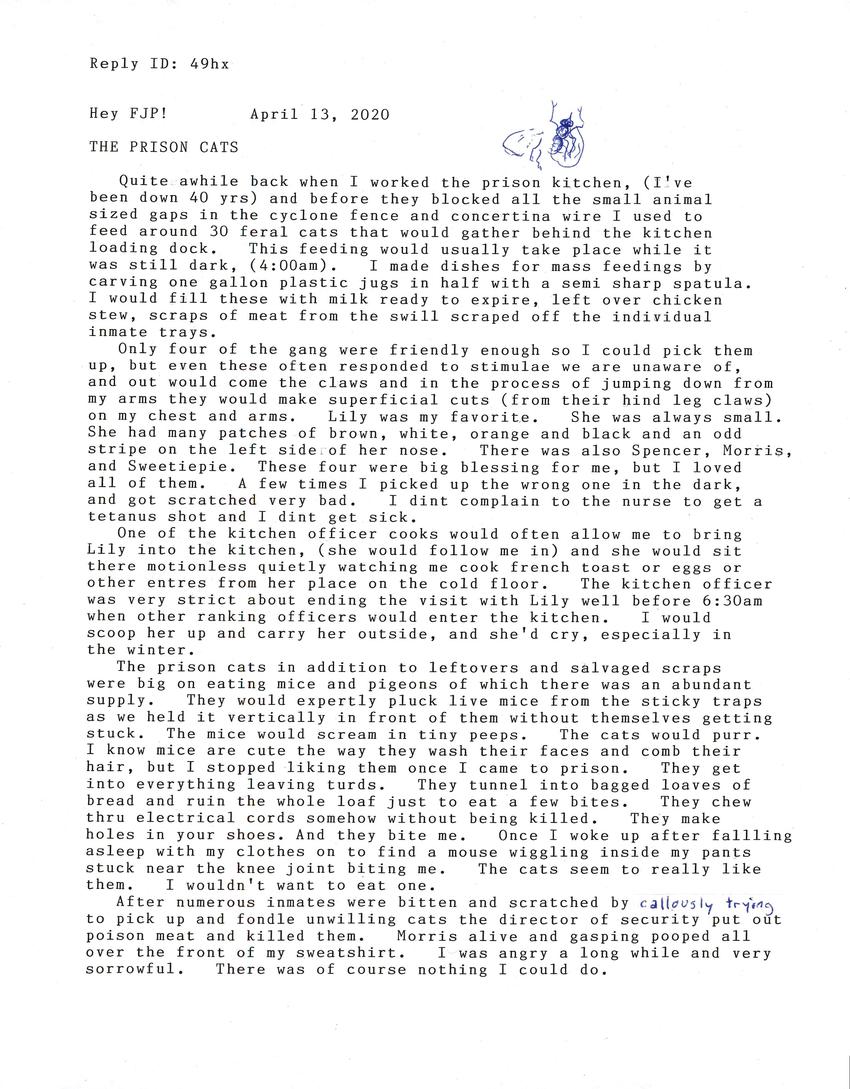 Quite a while back when I worked the prison kitchen, (I've been down 40 yrs) and before they blocked all the small animal sized gaps in the cyclone fence and concertina wire I used to feed around 30 feral cats that would gather behind the kitchen loading dock. This feeding would usually take place while it was still dark, (4:00 am). I made dishes for mass feedings by carving one-gallon plastic jugs in half with a semi-sharp spatula. I would fill these with milk ready to expire, leftover chicken stew, scraps of meat from the swill scraped off the individual inmate trays.
Only four of the gang were friendly enough so I could pick them up, but even these often responded to stimulae we are unaware of and would come the claws and in the process of jumping down from my arms, they would make superficial cuts (from their hind leg claws) on my chest and arms. Lily was my favorite. She was always small. She had many patches of brown, white, orange and black and an odd stripe on the left side of her nose. There was also Spencer, Morris, and Sweetiepie. These four were big blessings for me, but I loved all of them. a few times I picked up the wrong one in the dark, and got scratched very bad. I didn't complain to the nurse to get a tetanus shot and I didn't get sick. One of the two kitchen officer cooks would often allow me to bring Lily into the kitchen, (she would follow me in) and she would sit there motionless quietly watching me cook french toast or eggs or other entries from her place on the cold floor. The kitchen officer was very strict about ending the visit with Lily well before 6:30 am when other ranking officers would enter the kitchen. I would scoop her up and carry her outside, and she'd cry, especially in the winter.
The prison cats in addition to leftovers and salvaged scraps were big on eating mice and pigeons of which there was an abundant supply. They would expertly pluck live mice from the sticky traps as we held it vertically in front of them without themselves getting stuck. The mise would scream in tiny peeps. The cats would purr. I know mice are cute the way their faces and comb their hair, but I stopped liking them once I came to prison. They get into everything leaving turds. They tunnel into bagged loaves of bread and ruin the whole load just to eat a few bites. They chew through electrical cords somehow without getting killed. They make holes in their shoes. And they bite me. Once I woke up after falling asleep with my clothes on to find a mouse wiggling inside my pants stuck near the knee joint biting me. The cats seem to really like them. I wouldn't want to eat one.
After numerous inmates were bitten and scratched by callously trying to pick up and fondle unwillingly cats the director of security put out poison meat and killed them. Morris alive and gasping pooped all over the front of my sweatshirt. I was angry a long while and very sorrowful. There was of course nothing I could do.