Some Random Thoughts On Coronaviruis Consequences 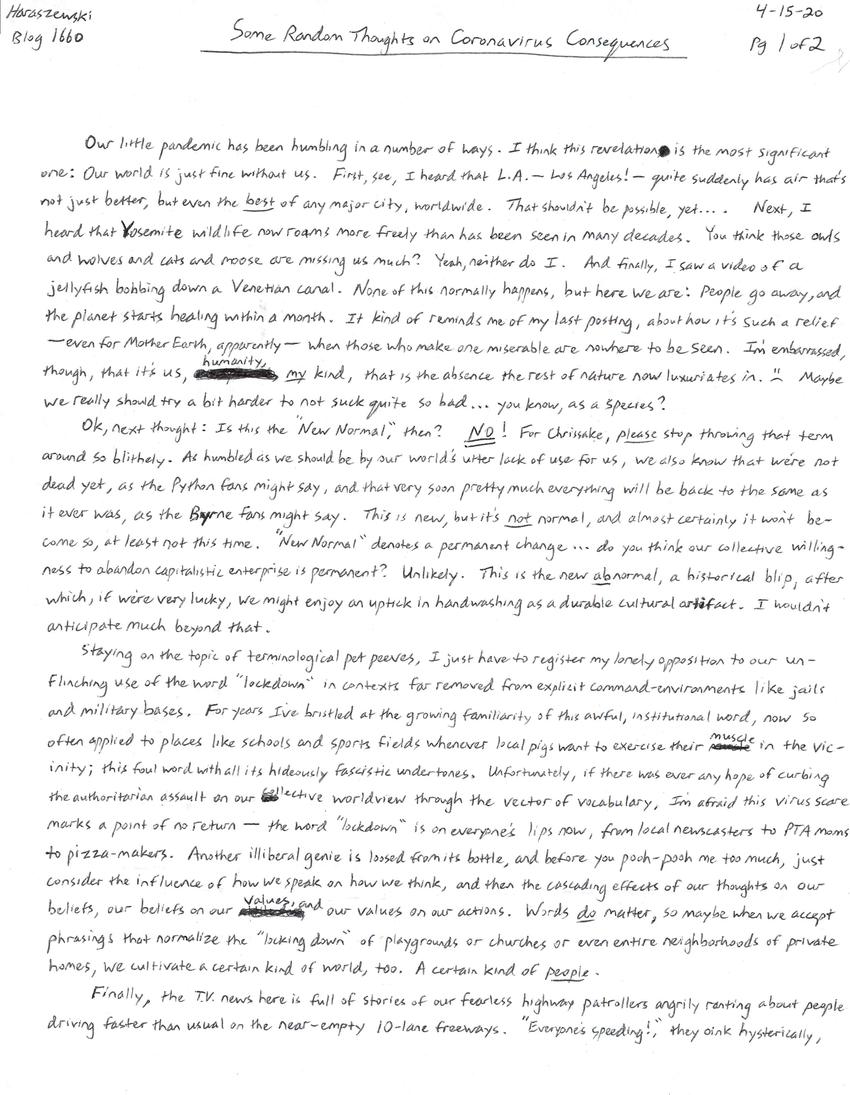 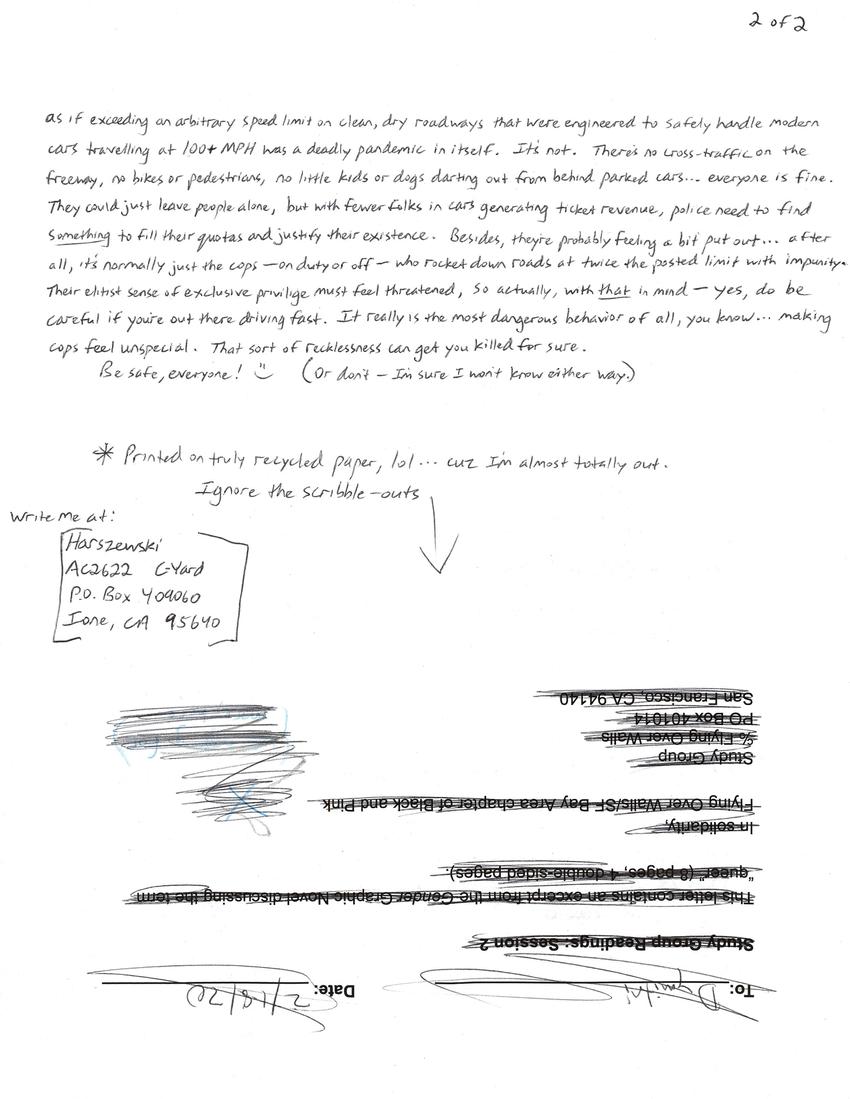 Our little pandemic has been humbling in a number of ways. I think this revelation is the most significant one: Our world is just fine without us. First, see, I heard that L.A. - Los Angeles! - quite suddenly has air that's not just better, but even the best of any major city, worldwide. That shouldn't be possible, yet... . Next, I heard that Yosemite wildlife now roams more freely than has been seen in many decades. You think those owls and wolves and cats and moose are missing much? Yeah, neither do I. And finally, I saw a video of a jellyfish bobbing down a Venetian canal. None of this normally happens, but here we are: People go away, and the planet starts healing within a month. It kind of reminds me of my last posting about how it's such a relief - even for Mother Earth apparently - when those who make one miserable are nowhere to be seen. I'm embarrassed, though, that it's us, humanity, my kind, that is the absence the rest of nature now luxuriates in. :( Maybe we really should try a bit harder to not suck quite so bad... you know, as a species?
Ok, next thought: Is this the "New Normal," then? No! for Chrissake, please stop throwing that term around so blindly. As humbled as we should be by our world's utter lack of use for us, we also know that we're not dead yet, as the Python fans might say, and that very soon pretty much everything will be back to the same as it ever was, as the Byrne fans might say. This is new, but it's not normal, and almost certainly it won't become so, at least not this time. "New Normal" denotes a permanent change... do you think our collective willingness to abandon capitalistic enterprise is permanent? Unlikely. This is the new abnormal, a historical blip, after which, if wire very lucky, we might enjoy an uptick in handwashing as a durable cultural artifact. I wouldn't anticipate much beyond that.
Staying on the topic of terminological pet peeves, I just have to register my lonely opposition to our unflinching use of the word "lockdown" in contexts far removed from explicit command-environments like jails and military bases. For years I've bristled at the growing familiarity of that awful institutional word, now so often applied to places like schools and sports fields whenever local pigs want to exercise their muscle in the vicinity; this foul world with all its hideously fascistic undertones. Unfortunately, if there was ever any hope of curbing the authoritarian assault on our collective worldview through the vector of vocabulary, I'm afraid this virus scare marks a point of no return - the word "lockdown" is on everyone's lips now, from local newscasters to PTA moms to pizza-makers. Another illiberal genie is loosed from its bottle, and before you pooh-pooh me too much, just consider the influence of how we speak on how we think, and then the cascading effects of our thoughts on our beliefs, our beliefs on our values, our values on our actions. Words do matter, so maybe when we accept phrasings that normalize the "locking down" of playgrounds or churches or even entire neighborhoods of private homes, we cultivate a certain kind of world too. A certain kind of people.
Finally, the T.V. news here is full of stories of our fearless highway patrollers angrily ranting about people driving faster than usual on the near-empty 10-lane freeways. "Everyone's speeding!," they oink hysterically, as if exceeding an arbitrary speed limit on clean,dry roadways that were engineered to safely handle modern cars travelling at 100+ MPH was a deadly pandemic in itself. It's not. There's no cross-traffic on the freeway, no bikes or pedestrians, no little kids or dogs darting out from behind the parked cars... everyone is fine. They could just leave people alone, but with fewer folks in cars generating ticket revenue, police need to find something to fill their quotas and justify their existence. Besides, they're probably feeling a bit put out...after all, it's normally just the cops - on duty or off - who racket down roads at twice the posted limit with impunity. Their elitist sense of exclusive privilige must feel threatened, so actually with that in mind - yes, do be careful if you're out there driving fast. It really is the most dangerous behavior of all, you know... making cops feel unspecial. That sort of recklessness can get you killed for sure.
Be safe, everyone! :) (Or don't -I'm sure I won't know either way)
Write me at: Harszewski Ac2622 C- Yard P.O. Box 408060 Ione, CA 95640

Thanks for writing! I finished the transcription for your post. I thought your idea of COVID-19 not being our "New Normal" particularly interesting. I think that's an uplifting idea, and I can not wait until we can go back to what is truly our real normal.
(scanned reply – view as blog post)
uploaded June 4, 2020.  Original (PDF) 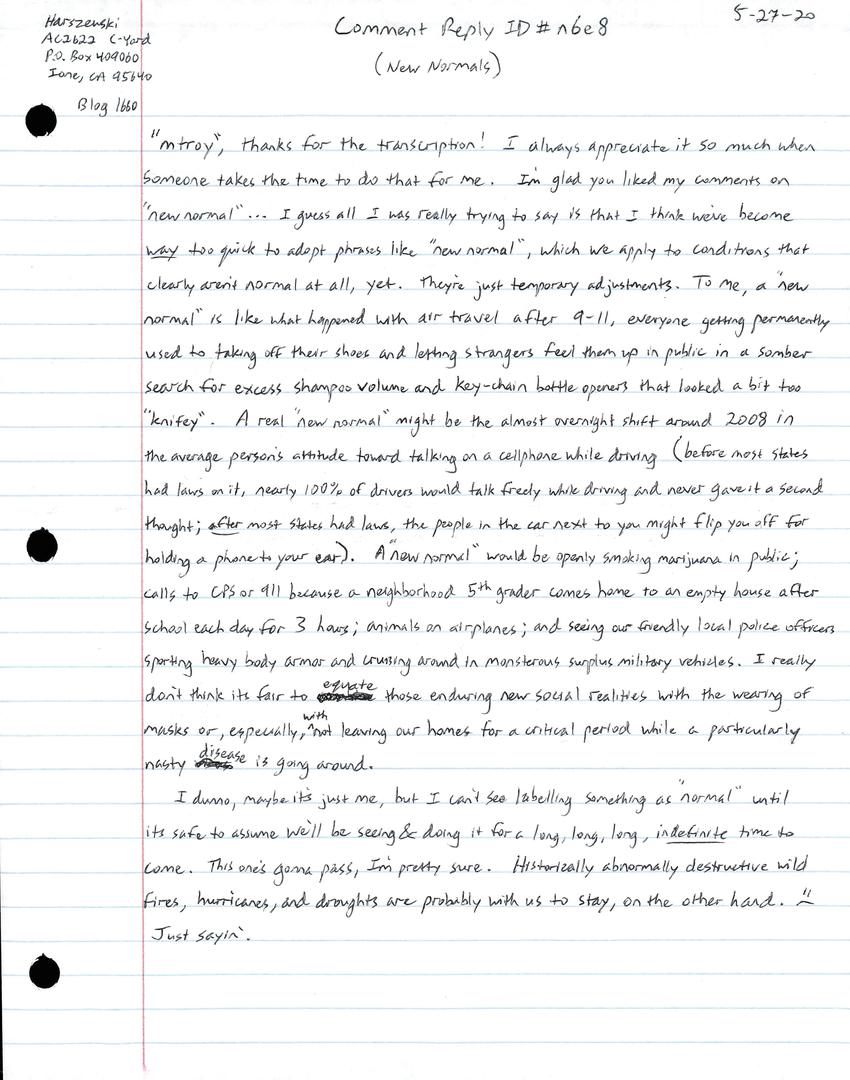 That makes a ton of sense! A lot about life right now is not meant to be normal, but a lot that has been considered normal in the past is now being called in to question. I guess the 20s a century later are pretty similar to the current 20s.
(scanned reply – view as blog post)
uploaded July 7, 2020.  Original (PDF) 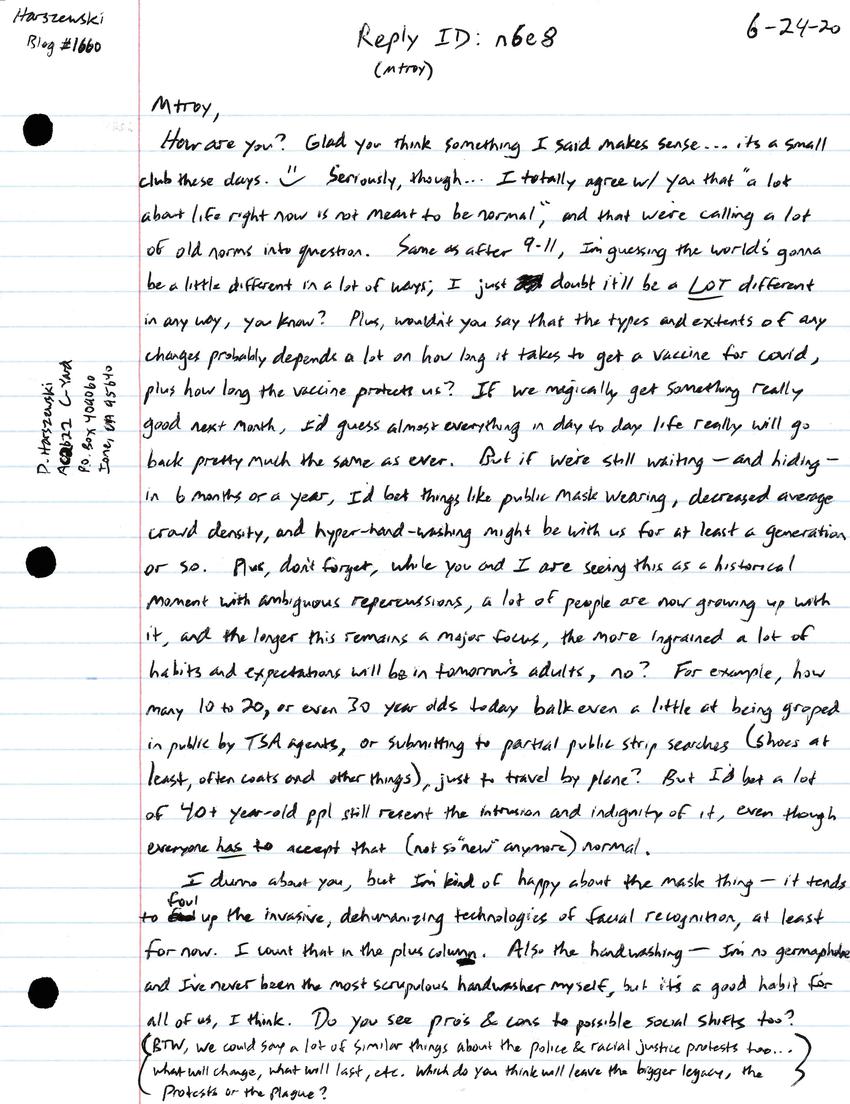