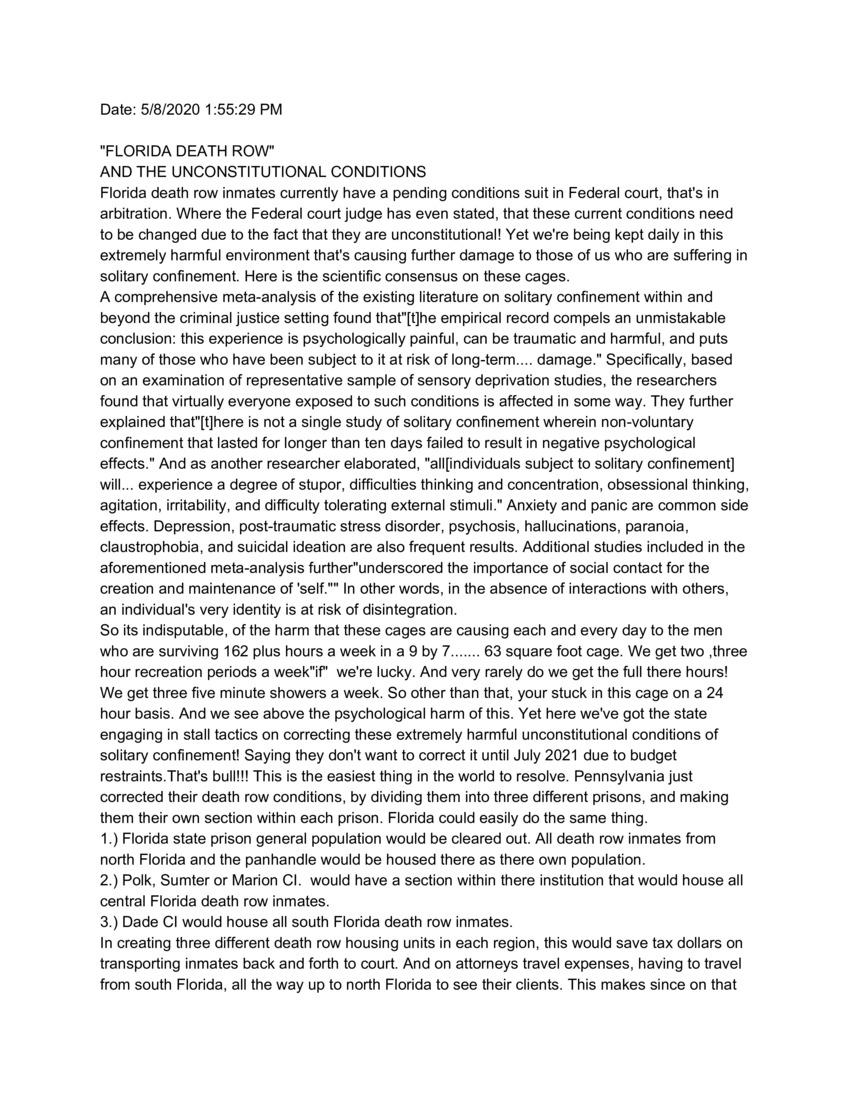 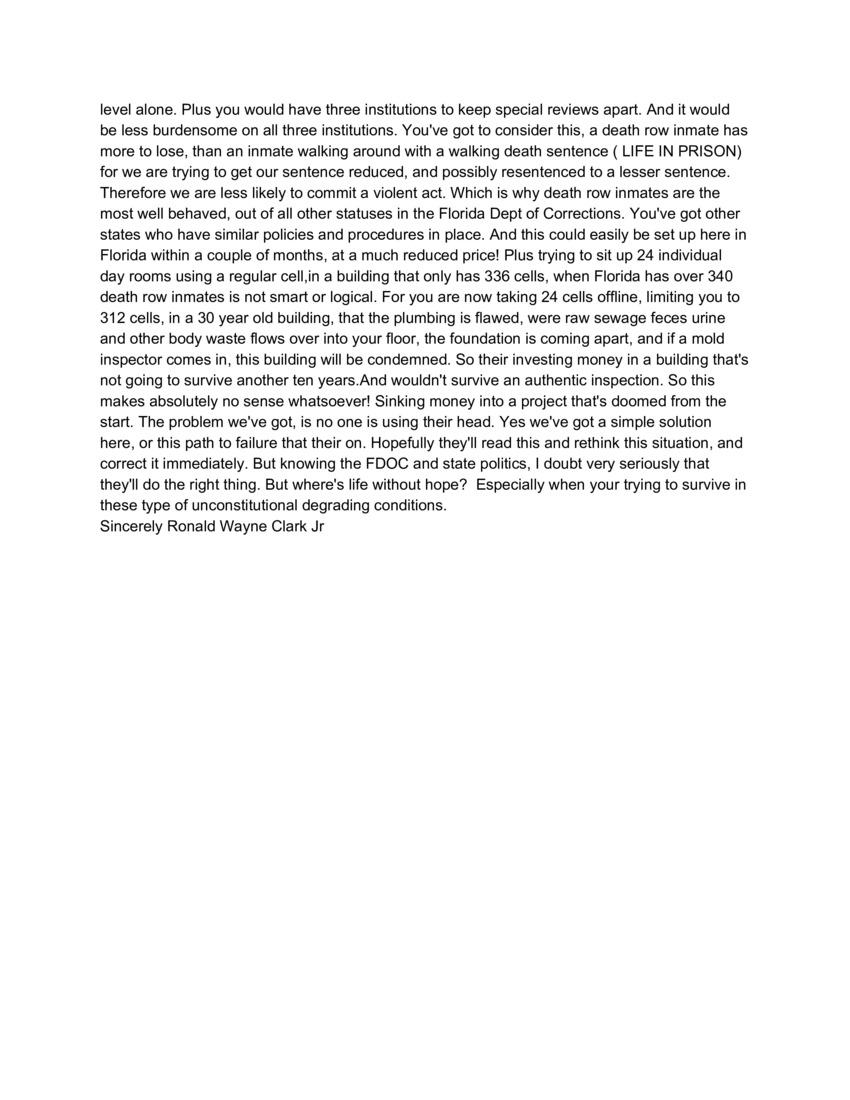 "FLORIDA DEATH ROW" AND THE UNCONSTITUTIONAL CONDITIONS
Florida death dory inmates currently have a pending conditions suit in Federal court, that's in arbitration. Where the Federal court judge has even stated, that these current conditions need to be changed due to the fact that they are unconstitutional! Yet we're being kept daily in this extremely harmful environment that's causing further damage to those of us who are suffering in solitary confinement. Here is the scientific consensus on theses cages.
A comprehensive meta-analysis of the existing literature on solitary confinement within and beyond the criminal justice setting found that "[t]he empirical record compels an unmistakable conclusion: this experience is psychologically painful, can be traumatic and harmful, and puts many of those who have been subject to it at risk of long-term... damage." Specifically, based on an examination of representative sample of sensory deprivation studies, the researchers found that virtually everyone exposed to such conditions is affected in some way. They further explained that "[t]here is not a single study of solitary confinement wherein non-voluntary confinement that lasted for longer than ten days failed to result in negative psychological effects." And as another researcher elaborated, "all [individuals subject to solitary confinement] will... experience a degree of stupor, difficulties thinking and concentration, obsessional thinking, agitation, irritability, and difficulty tolerating external stimuli." Anxiety and panic are common side effects. Depression, post-traumatic stress disorder, psychosis, hallucinations, paranoia, claustrophobia, and suicidal ideation are also frequent results. Additional studies included in the aforementioned meta-analysis further "underscored the importance of social contact for the creation and maintenance of 'self'." In other words, in the absence of interactions with others, an individual's very identity is at risk of disintegration.
So its indisputable, of the harm that these cages are causing each and every day to the men who are surviving 162 plus hours a week in a 9 by 7... 63 square foot cage. We get two, three hour recreation periods a week "if" we're lucky. And very rarely do we get the full three hours! We get three five minute showers a week. So other than that, you're stuck in this cage on a 24-hour basis. And we see above the psychological harm of this. Yet here we've got the state engaging in stall tactics on correcting these extremely harmful unconstitutional conditions of solitary confinement! Saying they don't want to correct it until July 2021 due to budget restraints. That's bull! This is the easiest thing in the world to resolve. Pennsylvania just corrected their death row conditions, by dividing them into three different prisons, and making them their own section within each prison. Florida could easily do the same thing.
1.) Florida state prison general population would be cleared out. All death row inmates from north Florida and the panhandle would be housed there as their own population.
2.) Polk, Sumter or Marion CI. would have a section within their institution that would house all central Florida death row inmates.
3.) Dade CI would house all south Florida death row inmates.
In creating three different death row housing units in each region, this would save tax dollars on transporting inmates back and forth to court. And on attorneys' travel expenses, having to travel from south Florida, all the way up to north Florida to see their clients. This makes sense on that level alone. Plus you would have three institutions to keep special reviews apart. And it would be less burdensome on all three institutions. You've got to consider this, a death row inmate has more to lost, than an inmate walking around with a walking death sentence (LIFE IN PRISON) for we are trying to get our sentence reduced, and possibly resentenced to a lesser sentence. Therefore we are less likely to commit a violent act. Which is why death row inmates are the most well behaved, out of all other statuses in the Florida Dept of Corrections. You've got other states who have similar policies and procedures in place. And this could easily be set up here in Florida within a couple of months, at a much reduced price! Plus trying to set up 24 individual day rooms using a regular cell, in a building that only has 336 cells, when Florida has over 340 death row inmates is not smart or logical. For you are now taking 24 cells offline, limiting you to 312 cells, in a 30 year old building, in which the plumbing is flawed, where raw sewage faeces, urine and other body waste flows over onto your floor, the foundation is coming apart, and if a mould inspector comes in, this building will be condemned. So they're investing money in a building that's not going to survive another ten years, and wouldn't survive an authentic inspection. So this makes absolutely no sense whatsoever! Sinking money into a project that's doomed from the start. The problem we've got is, no one is using their head. Yes we've got a simple solution here, or this path to failure that they're on. Hopefully they'll read this and rethink this situation, and correct it immediately. But knowing the FDOC and state politics, I doubt very seriously that they'll do the right thing. But where's life without hope? Especially when you're trying to survive in these type of unconstitutional degrading conditions.
Sincerely Ronald Wayne Clark Jr