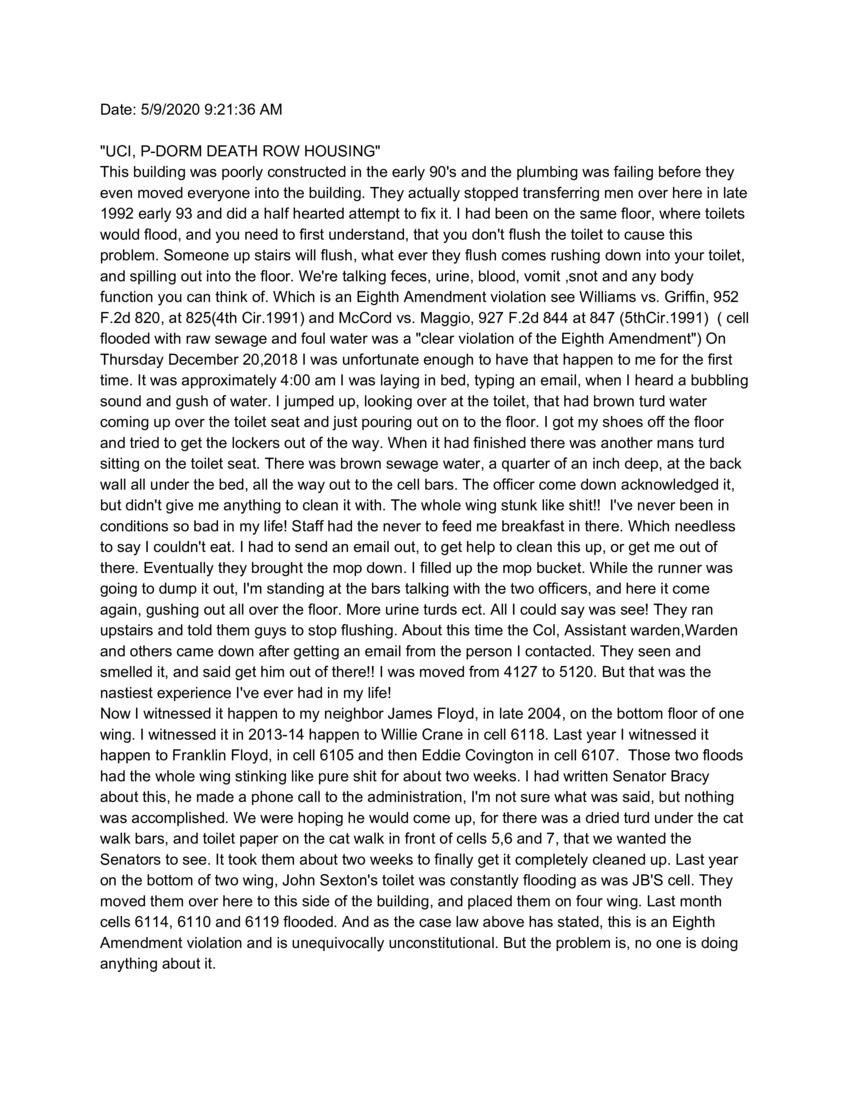 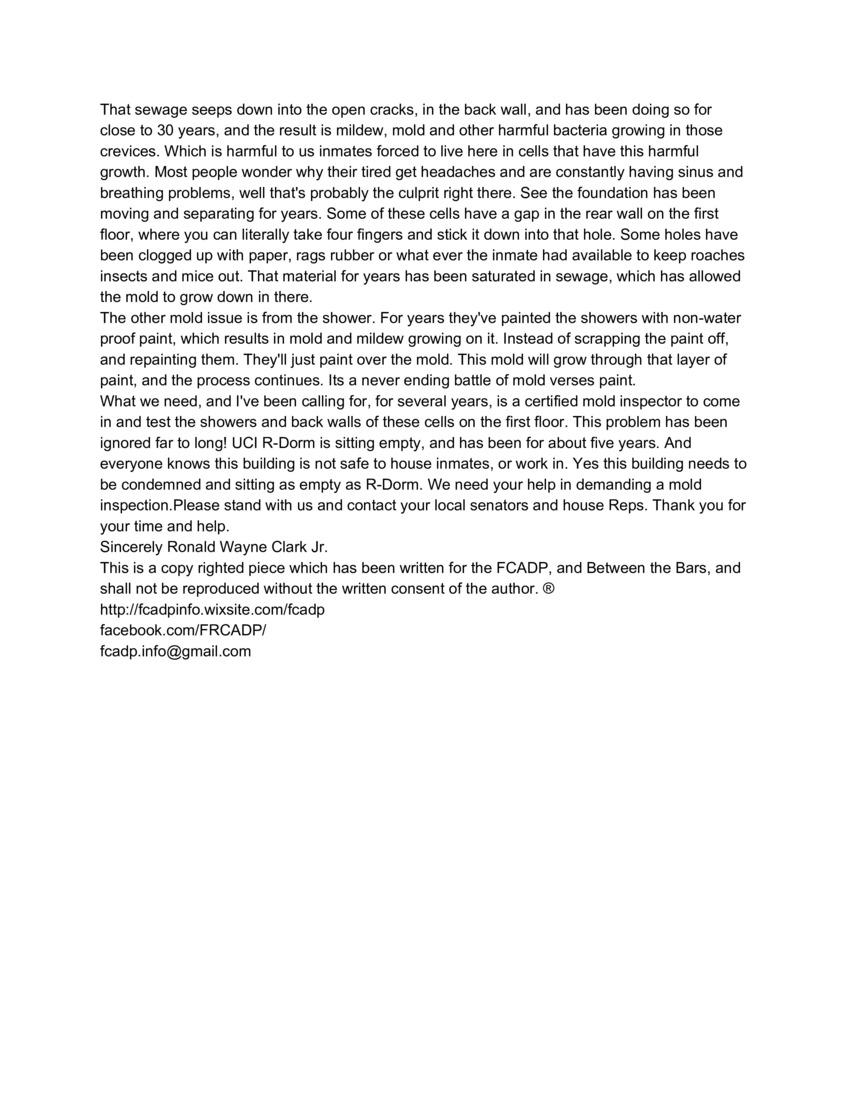 "UCI, P-DORM DEATH ROW HOUSING"
This building was poorly constructed in the early 90's and the plumbing was failing before they even moved everyone into the building. They actually stopped transferring men over here in late 1992 early 93 and did a half hearted attempt to fix it. I had been on the same floor, where toilets would flood, and you need to understand, that you don't flush the toilet to cause this problem. Someone up stairs will flush, what ever they flush comes rushing down into your toilet, and spilling out into the floor. We're talking feces, urine, blood, vomit, snot, and any body function you can think of. Which is an Eighth Amendment violation see Williams vs. Griffin, 952 F.2d 820, at 825(4thCir.1991) and McCord vs. Maggio, 927 F.2d 844 at 847 (5thCir.1991) ( cell flooded with raw sewage and foul water was a "clear violation of the Eighth Amendment") On Thursday December 20,2018 I was unfortunate enough to have that happen to me for the first time. It was approximately 4:00 am I was laying in bed, typing an email, when I heard a bubbling sound and gush of water. I jumped up, looking over at the toilet, that had brown turd water coming over the toilet seat and just pouring out on to the floor. I got my shoes off the floor and tried to get the lockers out of the way. When it had finished there was another mans turd sitting on the toilet seat. There was brown sewage water, a quarter of an inch deep, at the back wall all under the bed, all the way out to the cell bars. The officer come down acknowledged it, but didn't give me anything to clean it with. The whole wing stunk like shit!! I've never been in conditions so bad in my life! Staff had the nerve to feed me breakfast in there. Which needless to say I couldn't eat. I had to send an email out, to get help to clean this up, or get me out of there. Eventually they brought the mop down. I filled up the mop bucket. While the runner was going to dump it out, I'm standing at the bars talking with two officers, and here it come again, gushing out all over the floor. More urine turds etc. All I could say was see! They ran upstairs and told them guys to stop flushing. About this time the Col, Assistant warden, Warden and others came down after getting an email from the person I contacted. They seen and smelled it, and said get him out of there!! I was moved from 4127 to 5120. But that was the nastiest experience I've ever had in my life!

Now I witnessed it happen to my neighbor James Floyd, in late 2004, on the bottom floor of one wing. It witnessed it in 2013-2014 to Willie Crane in cell 6118. Last year I witnessed it happen to Franklin Floyd, in cell 6105 and then Eddie Covington in cell 6107. Those two floods had the whole wing stinking like pure shit for about two weeks. I had written Senator Bracy about this, but nothing was accomplished. We were hoping he would come up, for there was a dried turn under the cat walk bars, and toilet paper on the cat walk in front of cells 5, 6 and 7, that we wanted the Senators to see. It took them two weeks to finally get it completely cleaned up. Last year on the bottom of wing two, John Sexton's toilet was constantly flooding as was JB's cell. They moved them over here to this side of the building, and placed them on four wing. Last month cells 6114, 6110 and 6119 flooded. And as the case law above has stated, this is an Eighth Amendment violation and is unequivocally unconstitutional. But the problem is, no one is doing anything about it.

That sewage seeps down into the open cracks, in the back wall, and has been doing so for close to 30 years, and the result is mildew, mold and other harmful bacteria growing in those crevices. Which is harmful to us inmates forced to live here in cells that have this harmful growth. Most people wonder why their tired get headaches and are constantly having sinus and breathing problems, well that's probably the culprit right there. See the foundation has been moving and separating for years. Some of these cells have a gap in the rear wall on the first floor, where you can literally take four fingers and stick it down into that hole. Some holes have been clogged up with paper, rags rubber or whatever the inmate had available to keep roaches insects and mice out. That material for years has been saturated with sewage, which has allowed the mold to grown down in there.

The other mold issue is from the shower. For years they've painted the showers with non-water proof pain, which results in mold and mildew growing on it. Instead of scrapping the paint off, and repainting them. They'll just paint over the mold. This mold will grow through that layer of pain, and the process continues. Its a never ending battle of mold versus paint.

What we need, and I've been calling for, for several years, is a certified mold inspector to come in and test the showers and back walls of these cells on the first floor. This problem has been ignored far too long! UCI R-Dorm is sitting empty, and has been for about five yeras. And everyone knows this building is not safe to house inmates, or work in. Yes this building needs to be condemned and sitting as empty as R-Dorm. We need your help in demanded a mold inspection. Please stand with us and contact your local senators and house Reps. Thank you for your time and help.

This is a copy righted piece which has been written for the FCADP, and Between the Bars, and shall not be reproduced without the written consent of the author.
http://fcadpinfo.wixsite.com/fcadp
facebook.com/FRCADP
fcadp.info@gmail.com