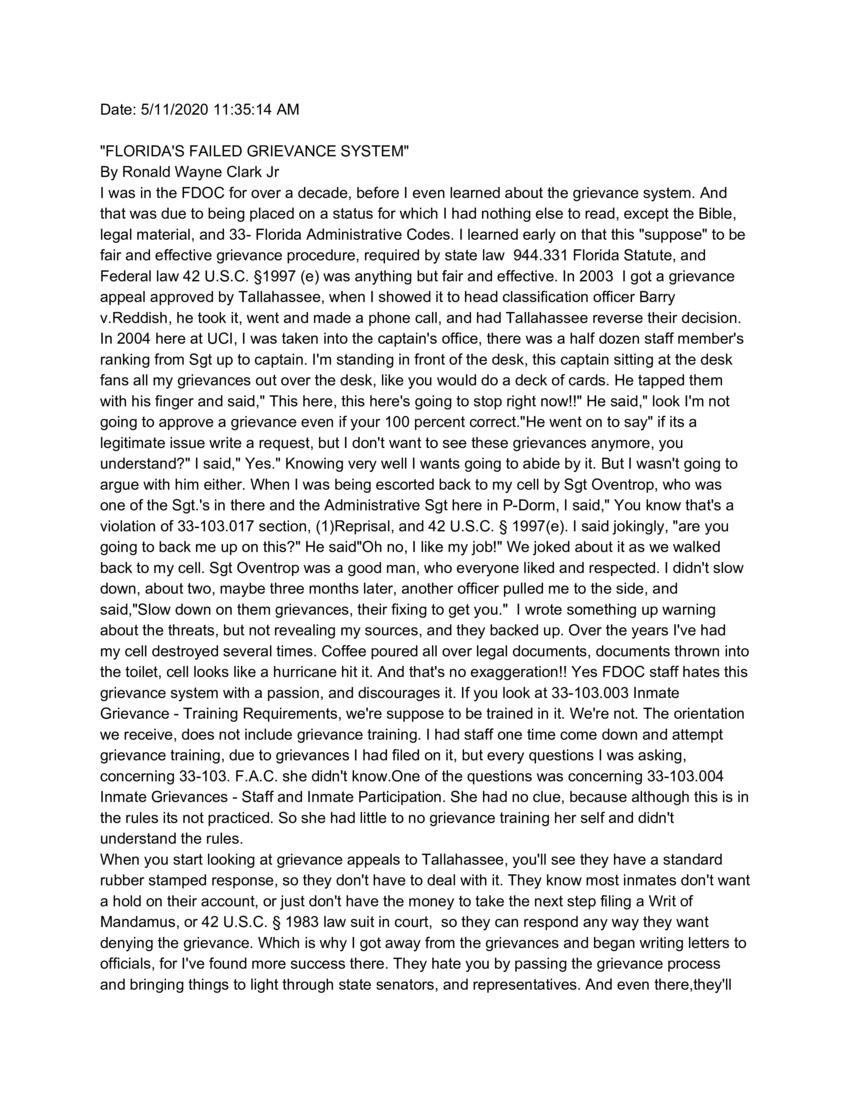 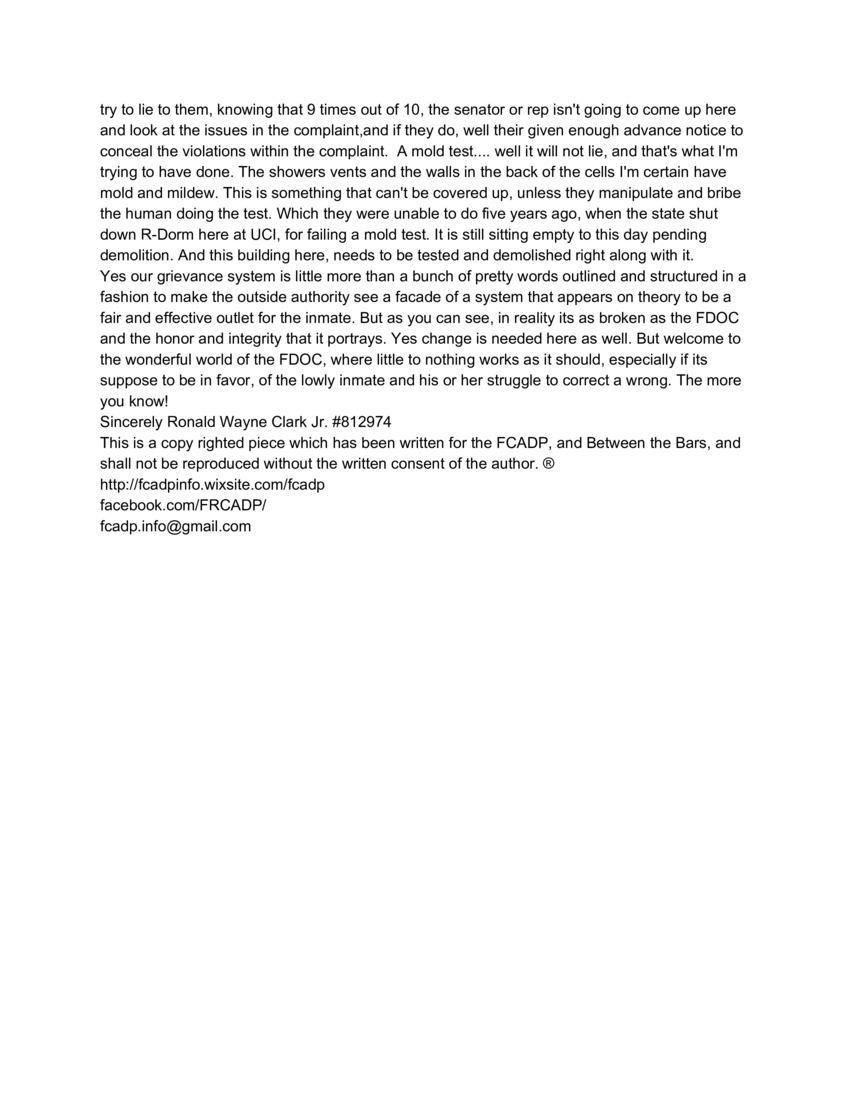 | was in the FDOC for over a decade, before | even iearned about the grievance system. And
that was due to being placed on a status for which | had nothing else to read, except the Bible,
legal material, and 33- Florida Administrative Codes. | learned early on that this “suppose” to be
fair and effective grievance procedure, required by state law 944.331 Florida Statute, and
Federal law 42 U.S.C. §1997 (e) was anything but fair and effective. In 2003 | got a grievance
appeal approved by Tallahassee, when | showed it to head classification officer Barry
v.Reddish, he took it, went and made a phone call, and had Tallahassee reverse their decision.
In 2004 here at UCI, | was taken into the captain's office, there was a half dozen staff member's
ranking from Sgt up to captain. I'm standing in front of the desk, this captain sitting at the desk
fans all my grievances out over the desk, like you would do a deck of cards. He tapped them
with his finger and said," This here, this here's going to stop right now!!" He said,” look I'm not
going to approve a grievance even if your 100 percent correct."He went on to say” if its a
legitimate issue write a request, but | don't want to see these grievances anymore, you
understand?” | said,” Yes." Knowing very well | wants going to abide by it. But | wasn't going to
argue with him either. When | was being escorted back to my cell by Sgt Oventrop, who was
one of the Sgt.'s in there and the Administrative Sgt here in P-Dorm, | said,” You know that's a
violation of 33-103.017 section, (1)Reprisal, and 42 U.S.C. § 1997(e). | said jokingly, “are you
going to back me up on this?" He said"Oh no, | like my job!" We joked about it as we walked
back to my cell. Sgt Oventrop was a good man, who everyone liked and respected. | didn’t slow
down, about two, maybe three months later, another officer pulled me to the side, and
said,"Slow down on them grievances, their fixing to get you.” | wrote something up warning
about the threats, but not revealing my sources, and they backed up. Over the years I've had
my cell destroyed several times. Coffee poured all over legal documents, documents thrown into
the toilet, cell looks like a hurricane hit it. And that’s no exaggeration!! Yes FDOC staff hates this
grievance system with a passion, and discourages it. If you look at 33-103.003 Inmate
Grievance - Training Requirements, we're suppose to be trained in it. We're not. The orientation
we receive, does not include grievance training. | had staff one time come down and attempt
grievance training, due to grievances | had filed on it, but every questions | was asking,
conceming 33-103. F.A.C. she didn't know.One of the questions was conceming 33-103.004
Inmate Grievances - Staff and Inmate Participation. She had no clue, because although this is in
the rules its not practiced. So she had little to no grievance training her self and didn't
understand the rules.

When you start looking at grievance appeals to Tallahassee, you'll see they have a standard
rubber stamped response, so they don't have to deal with it. They know most inmates don't want
a hold on their account, or just don't have the money to take the next step filing a Writ of
Mandamus, or 42 U.S.C. § 1983 law suit in court, so they can respond any way they want
denying the grievance. Which is why !| got away from the grievances and began writing letters to
officials, for I've found more success there. They hate you by passing the grievance process
and bringing things to light through state senators, and representatives. And even there,they'll