Why I Advocate Against the Death Penalty 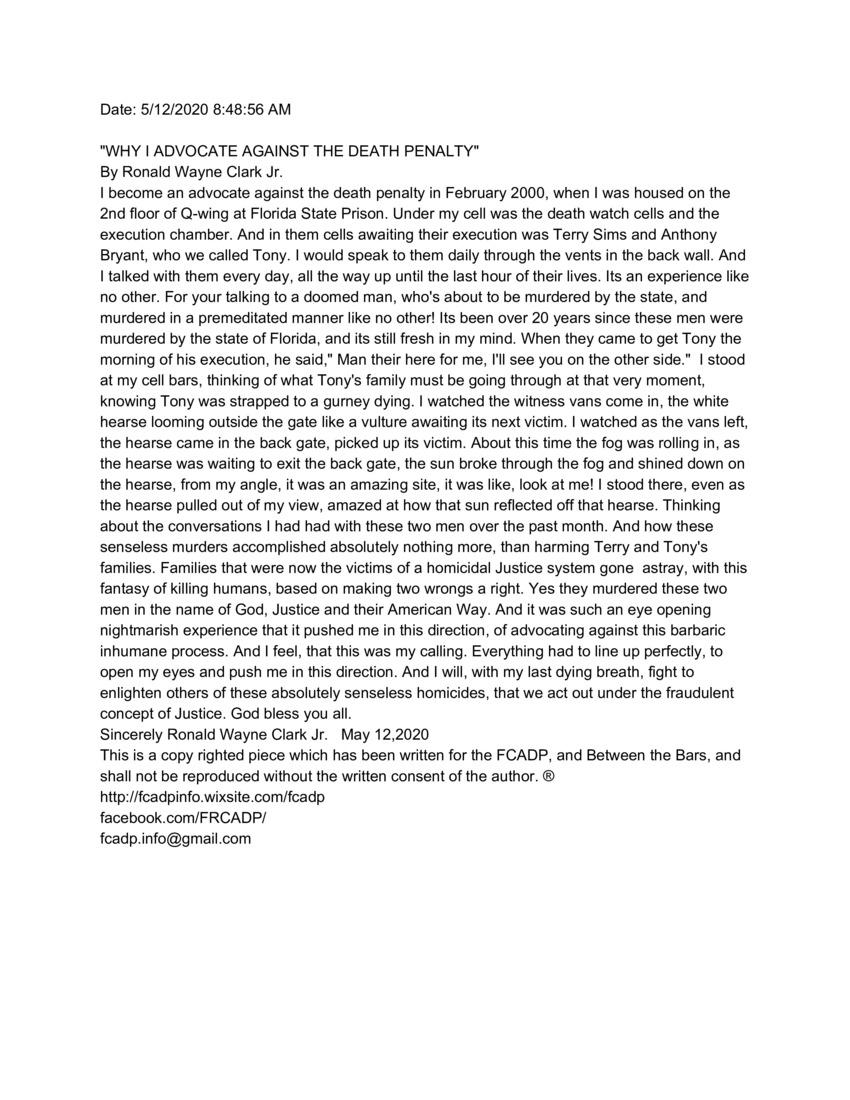 "WHY | ADVOCATE AGAINST THE DEATH PENALTY"

| become an advocate against the death penalty in February 2000, when | was housed on the
2nd floor of Q-wing at Florida State Prison. Under my cell was the death watch cells and the
execution chamber. And in them cells awaiting their execution was Terry Sims and Anthony
Bryant, who we called Tony. | would speak to them daily through the vents in the back wall. And
| talked with them every day, all the way up until the last hour of their lives. Its an experience like
no other. For your talking to a doomed man, who's about to be murdered by the state, and
murdered in a premeditated manner like no other! Its been over 20 years since these men were
murdered by the state of Florida, and its still fresh in my mind. When they came to get Tony the
morning of his execution, he said,” Man their here for me, I'll see you on the other side.” | stood
at my cell bars, thinking of what Tony's family must be going through at that very moment,
knowing Tony was strapped to a gumey dying. | watched the witness vans come in, the white
hearse looming outside the gate like a vulture awaiting its next victim. | watched as the vans left,
the hearse came in the back gate, picked up its victim. About this time the fog was rolling in, as
the hearse was waiting to exit the back gate, the sun broke through the fog and shined down on
the hearse, from my angle, it was an amazing site, it was like, look at me! | stood there, even as
the hearse pulled out of my view, amazed at how that sun reflected off that hearse. Thinking
about the conversations | had had with these two men over the past month. And how these
senseless murders accomplished absolutely nothing more, than harming Terry and Tony's
families. Families that were now the victims of a homicidal Justice system gone astray, with this
fantasy of killing humans, based on making two wrongs a right. Yes they murdered these two
men in the name of God, Justice and their American Way. And it was such an eye opening
nightmarish experience that it pushed me in this direction, of advocating against this barbaric
inhumane process. And | feel, that this was my calling. Everything had to line up perfectly, to
open my eyes and push me in this direction. And | will, with my last dying breath, fight to
enlighten others of these absolutely senseless homicides, that we act out under the fraudulent
concept of Justice. God bless you all.

This is a copy righted piece which has been written for the FCADP, and Between the Bars, and
shall not be reproduced without the written consent of the author. ®