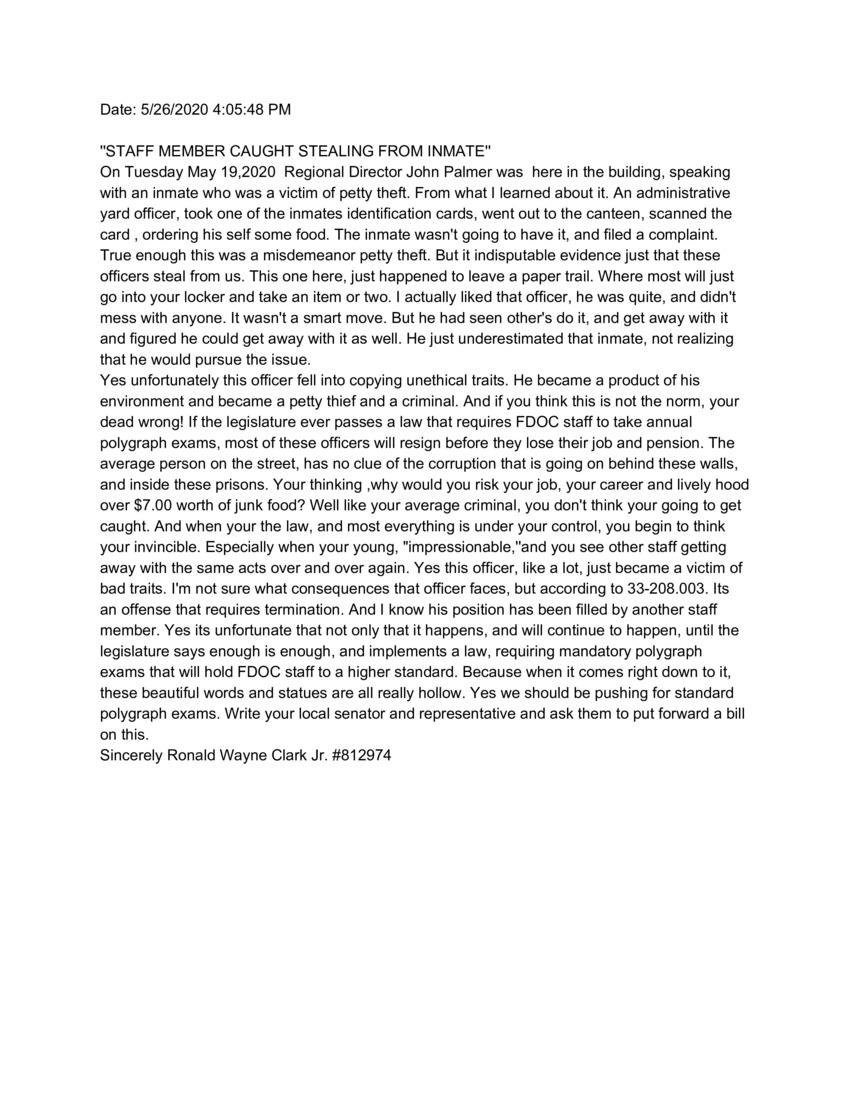 On Tuesday May 19, 2020 Regional Director John Palmer was here in the building, speaking with an inmate who was a victim of petty theft. From what I learned about it:

An administrative yard officer took one of the inmate's identification cards, went out to the canteen, scanned the card, ordering himself some food. The inmate wasn't going to have it and filed a complaint. True enough, this was a misdemeanor petty theft. But it's also indisputable evidence that these officers steal from us. This one here just left behind a paper trail, where most will just go into your locker and take an item or two.

I actually liked that officer. He was quiet and didn't mess with anyone. It wasn't a smart move. But he had seen others do it and get away with it, and he figured he could get away with it as well. He just underestimated that inmate, not realizing that he would pursue the issue.

Yes, unfortunately, this officer fell into copying unethical traits. He became a product of his environment and became a petty thief and criminal. And if you think this is not the norm, you're dead wrong!

If the legislature ever passes a law that requires FDOC staff to take annual polygraph exams, most of these officers will resign before they lose their job and pension. The average person on the street has no clue of the corruption that is going on behind these walls and inside these prisons.

You're thinking, why should I risk my job, my career, and livelihood over $7 worth of junk food? Well, like your average criminal, you don't think you're going to get caught. And when you're the law and most everything is under your control, you begin to think you're invincible. Especially when you're young, impressionable, and you see other staff getting away with the same acts over and over again.

Yes, this officer just became a victim of bad traits, like a lot of them.

I'm not sure what consequences that officer faces but, according to 33-208.003, it's an offense that requires termination. And I know his position has been filled by another staff member. Yes, it's unfortunate that not only that it happens, and will continue to happen, until the legislature says enough is enough and implements a law requiring mandatory polygraph exams that will hold FDOC staff to higher standards.

Because when it comes right down to it, these beautiful words and statues are really hollow.

Yes, we should be pushing for standard polygraph exams. Write your local senator and representatives, and ask them to put forward a bill on this.