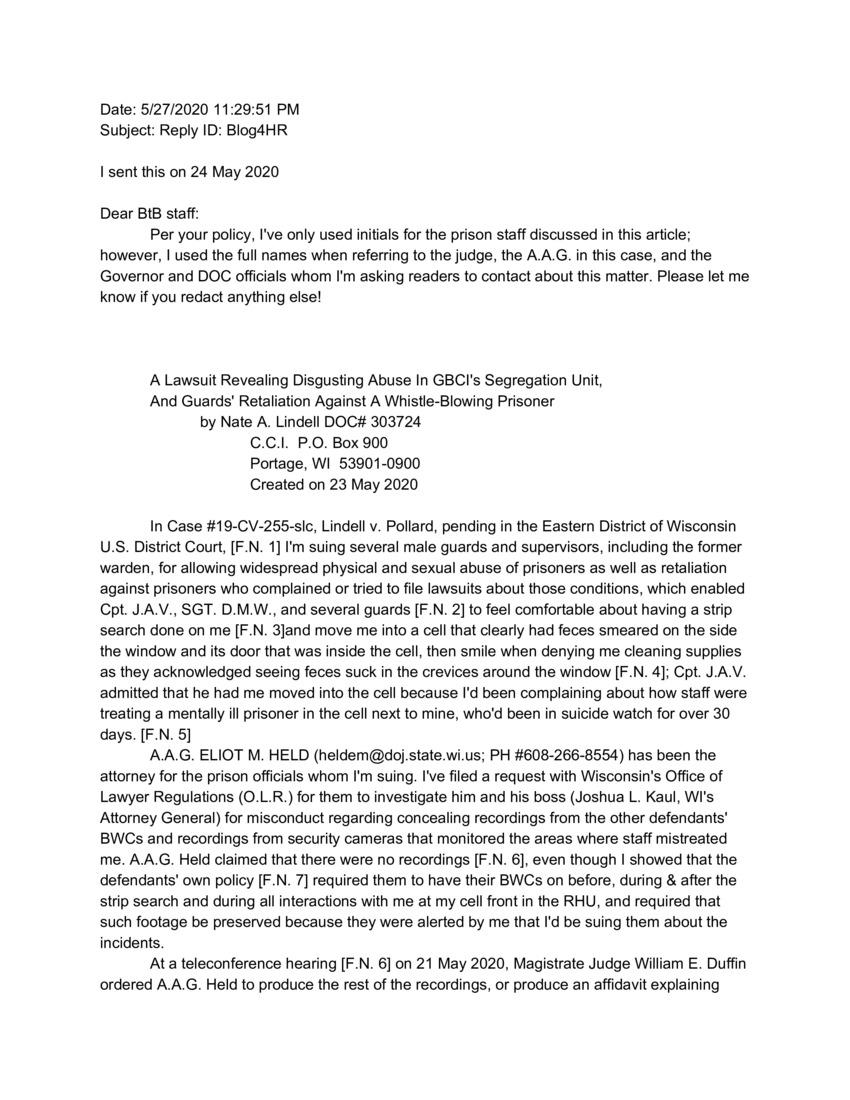 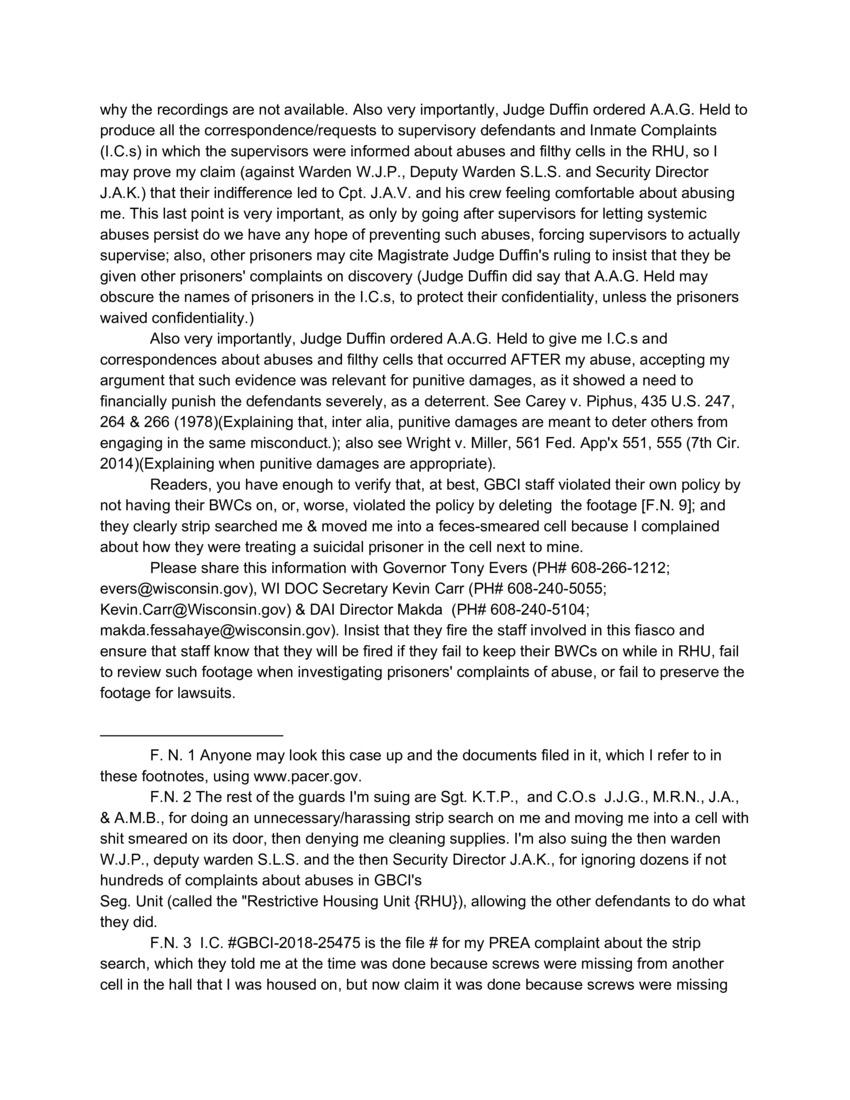 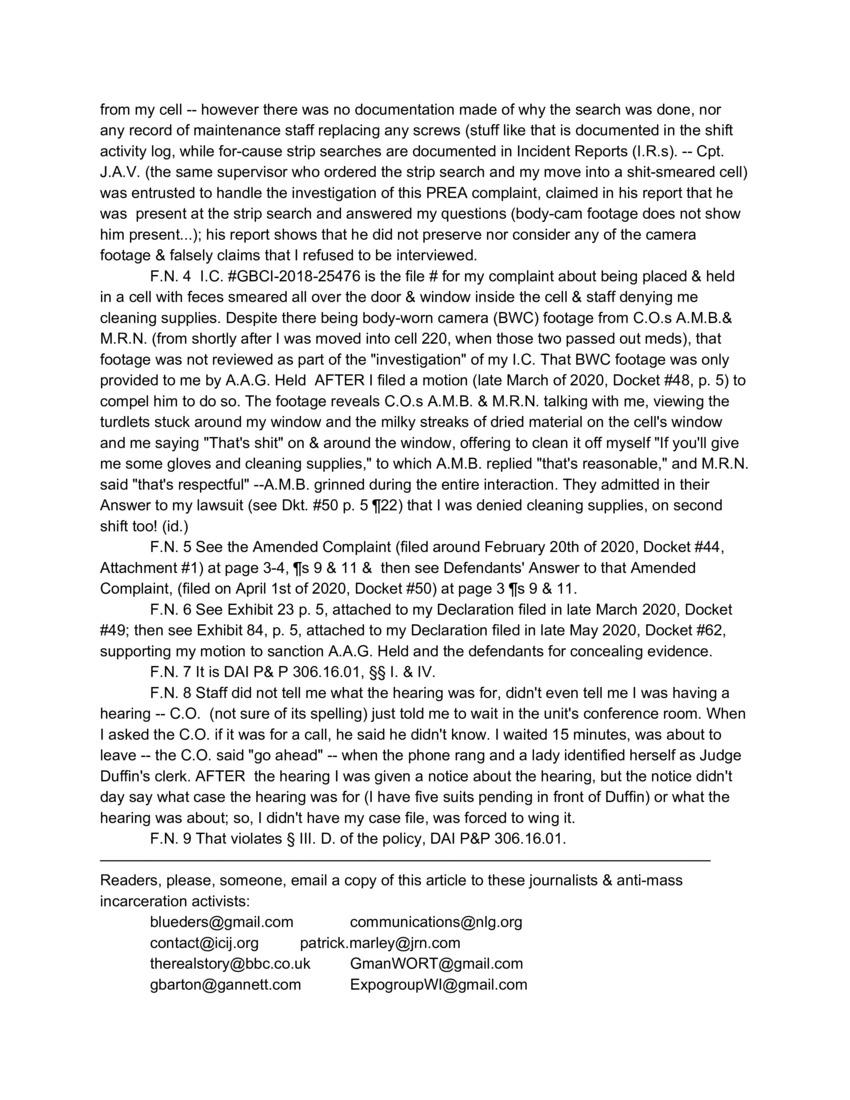 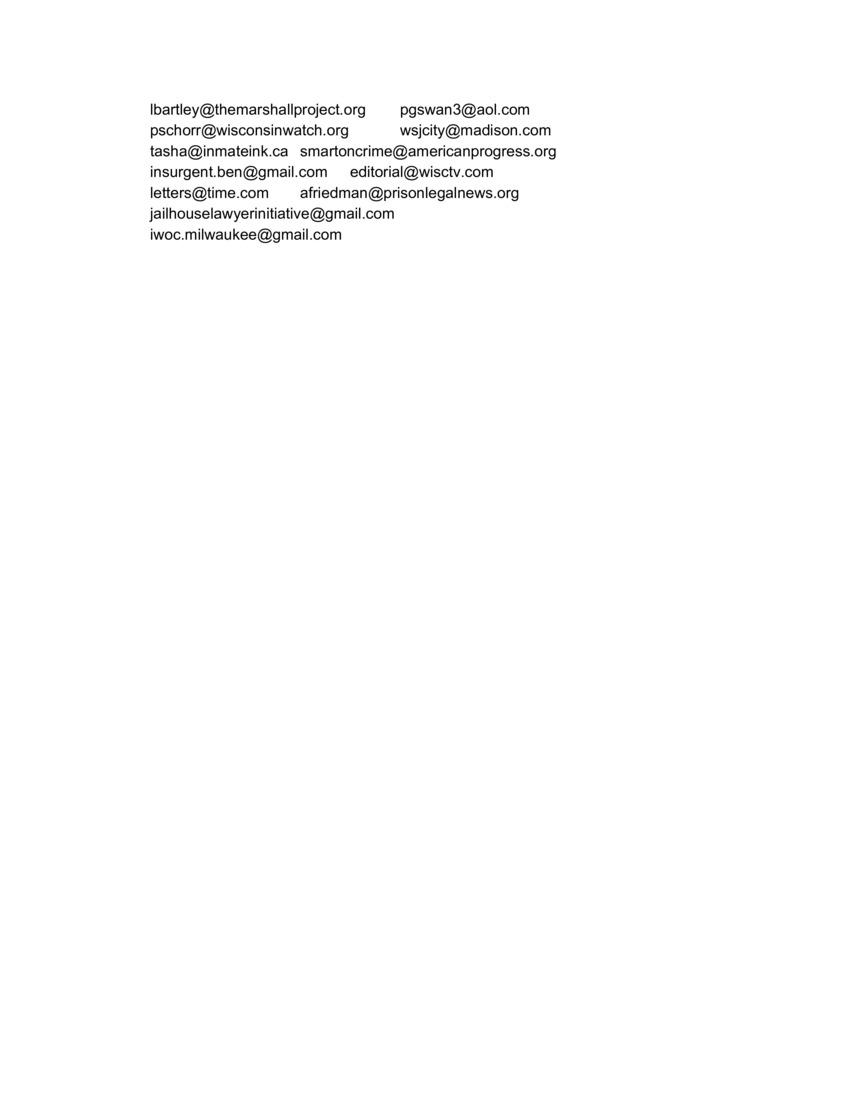 Per your policy, I've only used initials for the prison staff discussed in this article; however, I used the full names when referring to the judge, the A.A.G. in this case, and the Governor and DOC officials whom I'm asking readers to contact about this matter. Please let me know if you redact anything else!

In Case #19-CV-255-slc, Lindell v. Pollard, pending in the Eastern District of Wisconsin U.S. District Court, [F.N. 1] I'm suing several male guards and supervisors, including the former warden, for allowing widespread physical and sexual abuse of prisoners as well as retaliation against prisoners who complained or tried to file lawsuits about those conditions, which enabled Cpt. J.A.V., SGT. D.M.W., and several guards [F.N 2] to feel comfortable about having a strip search done on me [F.N. 3]and move me into a cell that clearly had feces smeared on the side the window and its door that was inside the cell, then smile when denying me cleaning supplies as they acknowledged seeing feces stuck in the crevices around the window [F.N. 4]; Cpt. J.A.V. admitted that he had me moved into the cell because I'd been complaining about how staff were treating a mentally ill prisoner in the cell next to mine, who'd been in suicide watch for over 30 days. [F.N. 5]

A.A.G. ELIOT M. HELD (heldem@doj.state.wi.us; PH #608-266-8554) has been the attorney for the prison officials whom i'm suing. I've filed a request with Wisconsin's Office of Lawyer Regulations (O.L.R.) for them to investigate him and his boss (Joshua L. Kaul, WI's Attorney General) for misconduct regarding concealing recordings from the other defendants' BWCs and recordings from security cameras that monitored the areas where staff mistreated me. A.A.G. Held claimed that there were no recordings [F.N. 6], even though I showed that the defendants' own policy [F.N. 7] required them to have their BWCs on before, during & after the strip search and during all interactions with me at my cell front in the RHU, and required that such footage be preserved because they were alerted by me that I'd be suing them about the incidents.

At a teleconference hearing [F.N. 6] on 21 May 2020, Magistrate Judge William E. Duffin ordered A.A.G. Held to produce the rest of the recordings, or produce an affidavit explaining why the recordings are not available. Also very importantly, Judge Duffin ordered A.A.G. Held to produce all the correspondence/requests to supervisory defendants and Inmate Complaints (I.C.s) in which the supervisors were informed about abuses and filthy cells in the RHU, so I may prove my claim (against Warden W.J.P., Deputy Warden S.L.S. and Security Director J.A.K.) that their indifference led to Cpt. J.A.V and his crew feeling comfortable about abusing me. This last point is very important, as only by going after supervisors for letting systemic abuses persist do we have any hope of preventing such abuses, forcing supervisors to actually supervise; also, other prisoners may cite Magistrate Judge Duffin's ruling to insist that they be given other prisoners' complaints on discovery (Judge Duffin did say that A.A.G. Held may obscure the names of prisoners in the I.C.s, to protect their confidentiality, unless the prisoners waived confidentiality.)

Also very importantly, Judge Duffin ordered A.A.G, Held to give me I.C.s and correspondences about abuses and filthy cells that occurred AFTER my abuse, accepting my argument that such evidence was relevant for punitive damages, as it showed a need to financially punish the defendants severely, as a deterrent. See Carey v. Piphus, 435 U.S. 247, 264 & 266 (1978)(Explaining that, inter alia, punitive damages are meant to deter others from engaging in the same misconduct.); also see Wright v. Miller, 561 Fed. App'x 551, 555 (7th Cir. 2014)(Explaining when punitive damages are appropriate).

Readers, you have enough to verify that, at best, GBCI staff violated their own policy by not having their BWCs on, or, worse, violated the policy by deleting the footage [F.N 9]; and they clearly strip searched me & moved me into a feces-smeared cell because I complained about how they were treating a suicidal prisoner in the cell next to mine.

Please share this information with Governor Tony Evers (PH# 608-266-1212; evers@wisconsin.gov), WI DOC Secretary Kevin Carr (PH# 608-240-5055; Kevin.Carr@Wisconsin.gov) & DAI Director Makda (PH# 608-240-5104; makda.fessahaye@wisconsin.gov). Insist that they fire the staff involved in this fiasco and ensure that staff know that they will be fired if they fail to keep their BWCs on while in RHU, fail to review such footage when investigating prisoners' complaints of abuse, or fail to preserve the footage for lawsuits.

F.N. 1 Anyone may look this case up and the documents filed in it, which I refer to in these footnotes, using www.pacer.gov

F.N. 2 The rest of the guards I'm suing are Sgt. K.T.P., and C.O.s J.J.G., M.R.N., J.A., & A.M.B., for doing an unnecessary/harassing strip search on me and moving me into a cell with shit smeared on its door, then denying me cleaning supplies. I'm also suing the then warden W.J.P., deputy warden S.L.S. and the then Security Director J.A.K., for ignoring dozens if not hundreds of complaints about abuses in GCBI's Seg. Unit (called the "Restrictive Housing Unit {RHU}), allowing the other defendants to do what they did.

F.N. 3 I.C. #GBCI-2018-25475 is the file# for my PREA complaint about the strip search, which they told me at the time was done because screws were missing from another cell in the hall that I was housed on, but now claim it was done because screws were missing from my cell -- however there was no documentation made of why the search was done, nor any record of maintenance staff replacing any screws (stuff like that is documented in the shift activity log, while for-cause strip searches are documented in Incident Reports (I.R.s). -- Cpt. J.A.V. (the same supervisor who ordered the strip search and my move into a shit-smeared cell) was entrusted to handle the investigation of this PREA complaint, claimed in his report that he was present at the strip search and answered my questions (body-cam footage does not show him present...); his report shows that he did not preserve nor consider any of the camera footage & falsely claims that I refused to be interviewed.

F.N. 4 I.C. # GBCI-2018-25476 is the file # for my complaint about being placed & held in a cell with feces smeared all over the door & window inside the cell & staff denying me cleaning supplies. Despite there being body-worn camera (BWC) footage from C.O.s A.M.B. & M.R.N. (from shortly after I was moved into cell 220, when those two passed out meds), that footage was not reviewed as part of the "investigation" of my I.C. That BWC footage was only provided to me by A.A.G. Held AFTER I filed a motion (late March of 2020, Docket #48, p.5) to compel him to do so. The footage reveals C.O.s A.M.B & M.R.N. talking with me, viewing the turdlets stuck around my window and the milky streaks of dried material on the cell's window and me saying "That's shit" on & around the window, offering to clean it off myself "If you'll give me some gloves and cleaning supplies," to which A.M.B. replied "that's reasonable," and M.R.N. said "that's respectful" --A.M.B grinned during the entire interaction. They admitted in their Answer to my lawsuit (see Dkt. #50 p. 5¶22) that I was denied cleaning supplies, on second shift too! (id.)

F.N. 8 Staff did not tell me what the hearing was for, didn't even tell me I was having a hearing -- C.O. (not sure of its spelling) just told me to wait in the unit's conference room. When I asked the C.O. if it was for a call, he said he didn't know. I waited 15 minutes, was about to leave -- the C.O. said "go ahead" -- when the phone rang and a lady identified herself as Judge Duffin's clerk. AFTER the hearing I was given a notice about the hearing, but the notice didn't day say what case the hearing was for (I have five suits pending in front of Duffin) or what the hearing was about; so, I didn't have my case file, was forced to wing it.

Readers, please, someone, email a copy of this article to these journalists & anti-mass incarceration activists: