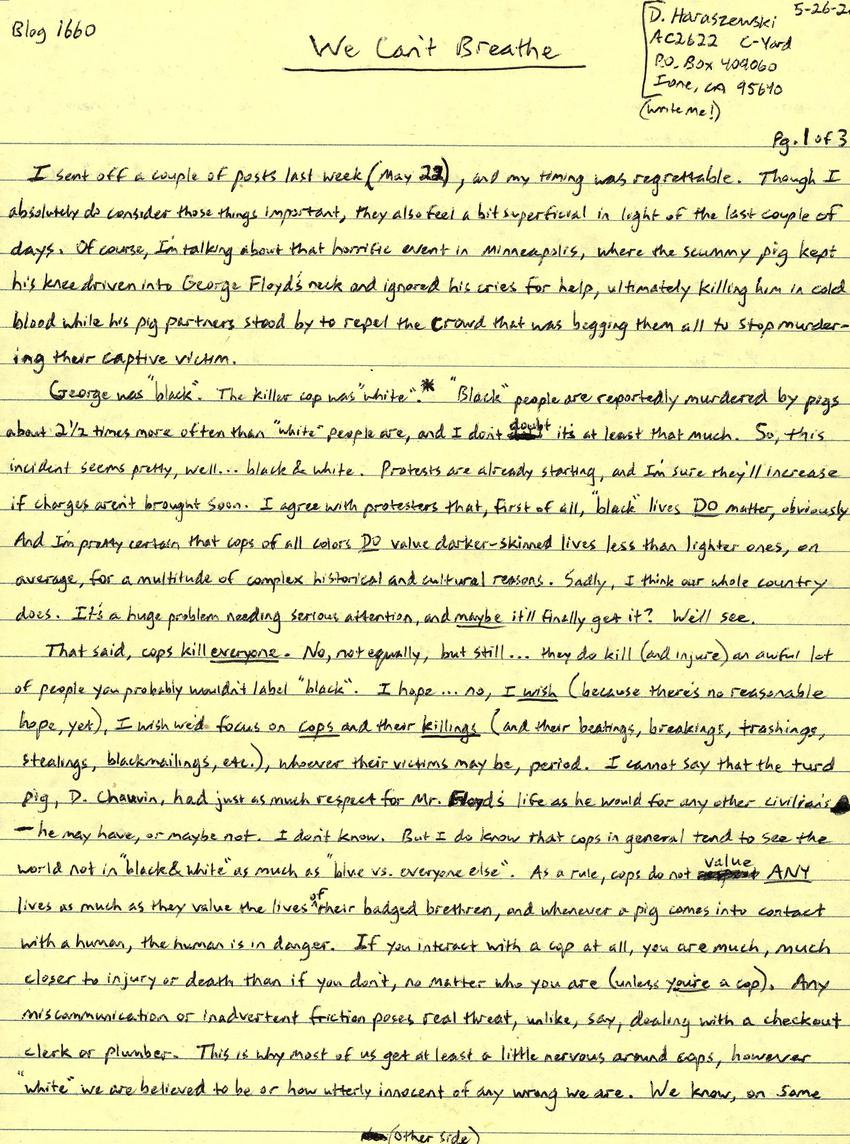 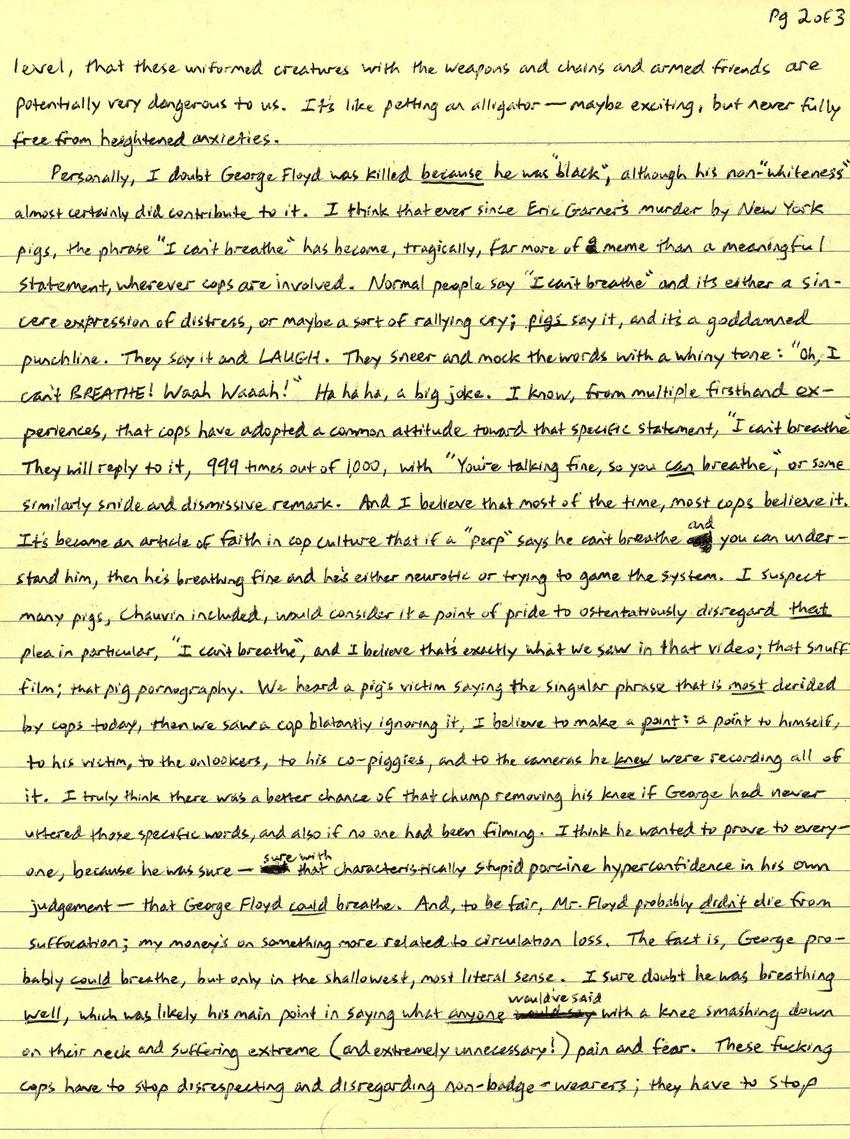 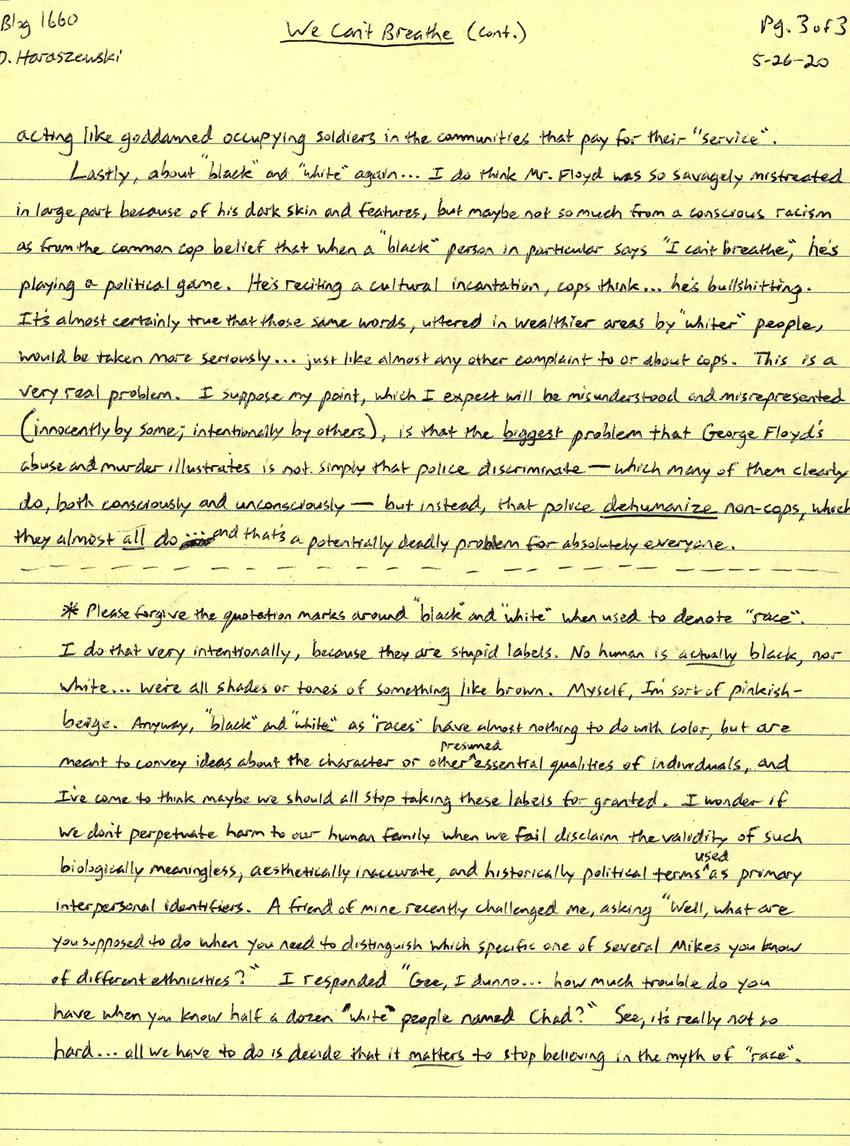 I sent off a couple of posts last week (May 22), and my timing was regrettable. Though I absolutely do consider those things important, they also feel a bit superficial in light of the last couple of days. Of course, I'm talking about that horrific event in Minneapolis, where the scummy pig kept his knee driven into George Floyd's neck and ignored his cries for help, ultimately killing him in cold blood while his pig partners stood by to repel the crowd that was begging them all to stop murdering their captive victim.

George was "black". The killer cop was "white". "Black" people are reportedly murdered by pigs about 2 1/2 times more often than "white" people are, and I don't doubt it's at least that much. So, this incident seems pretty, well...black & white. Protests are already starting, and I'm sure they'll increase if charges aren't brought soon. I agree with protesters that, first of all, "black" lives DO matter, obviously. And I'm pretty certain that cops of all colors DO value darker-skinned lives less than lighter ones, on average, for a multitude of complex historical and cultural reasons. Sadly, I think our whole country does. It's a huge problem needing serious attention, and maybe it'll finally get it? We'll see.

That said, cops kill everyone. No, not equally, but still...they do kill (and injure) an awful lot of people you probably wouldn't label "black". I hope...no, I wish (because there's no reasonable hope, yet), I wish we'd focus on cops and their killings (and their beatings, breakings, trashings, stealings, blackmailings, etc.), whoever their victims may be, period. I cannot say that the turd pig, D. Chauvin, had just as much respect for Mr. Floyd's life as he would for any other civilian's - he may have, or maybe not. I don't know. But I do know that cops in general tend to see the world not in "black & white" as much as "blue vs. everyone else". As a rule, cops do not value ANY lives as much as they value the lives of their badged brethren and whenever a pig comes into contact with a human, the human is in danger. If you interact with a cop at all, you are much, much closer to injury or death than if you don't, no matter who you are (unless you're a cop). Any miscommunication of inadvertent friction poses real threat, unlike, say, dealing with a checkout clerk or plumber. This is why most of us get at least a little nervous around cops, however "white" we are believed to be or how utterly innocent of any wrong we are. We know, on some level, that these uniformed creatures with the weapons and chains and armed friends are potentially very dangerous to us. It's like petting an alligator - maybe exciting, but never fully free from heightened anxieties.

Personally, I doubt George Floyd was killed because he was "black", although his non-"whiteness" almost certainly did contribute to it. I think that ever since Eric Garner's murder by New York pigs, the phrase "I can't breathe" has become, tragically, far more of a meme than a meaningful statement, wherever cops are involved. Normal people say "I can't breathe" and its either a sincere expression of distress, or maybe a sort of rallying cry; pigs say it, and it's a goddamned punchline. They say it and LAUGH. They sneer and mock the words with a whiny tone: "On, I can't BREATHE! Waah Waaah!" Ha ha ha, a big joke. I know, from multiple firsthand experiences, that cops have adopted a common attitude toward that specific statement, "I can't breathe". They will reply to it, 999 times out of 1,000, with "You're talking fine, so you can breathe," or some similarly snide and dismissive remark. And I believe that most of the time, most cops believe it. It's become an article of faith in cop culture that if a "perp" says he can't breathe and you can understand him, then he's breathing fine and he's either neurotic or trying to game the system. I suspect many pigs, Chauvin included, would consider it a point of pride to ostentatiously disregard that plea in particular, "I can't breathe", and I believe that's exactly what we saw in that video; that snuff film; that pig pornography. We heard a pig's victim saying the singular phrase that is most derided by cops today, then we saw a copy blatantly ignoring it, I believe to make a point: a point to himself, to his victim, to the onlookers, to his co-piggies, and to the cameras he knew were recording all of it. I truly think there was a better chance of that chump removing his knee if George had never uttered those specific words, and also if no one had been filming. I think he wanted to prove to everyone, because he was sure - sure with that characteristically stupid porcine hyper-confidence in his own judgement - that George Floyd could breathe. And, to be fair, Mr. Floyd probably didn't die from suffocation; my money's on something more more related to circulation loss. The fact is, George probably could breathe, but only in the shallowest, most literal sense. I sure doubt he was breathing well, which was likely his main point in saying what anyone would've said with a knee smashing down on their neck and suffering extreme (and extremely unnecessary!) pain and fear. These fucking cops have to stop disrespecting and disregarding non-badge-wearers; they have to stop acting like goddamned occupying soldiers in the communities that pay for their "service".

Lastly, about "black" and "white" again...I do think Mr. Floyd was so savagely mistreated in large part because of his dark skin and features, but maybe not so much from a conscious racism as from the common cop believe that when a "black" person in particular says "I can't breathe," he's playing a political game. He's reciting a cultural incantation, cops think...he's bullshitting. It's almost certainly true that these same words, uttered in wealthier areas by "whiter" people, would be taken more seriously...just like almost any other complaint to or about cops. This is a very real problem. I suppose my point, which I expect will be misunderstood and misrepresented (innocently by some; intentionally by others), is that the biggest problem that George Floyd's abuse and murder illustrates is not simply that police discriminate - which many of them clearly do, both consciously and unconsciously - but instead, that police dehumanize non-cops, which they almost all do...and that's a potentially deadly problem for absolutely everyone.

*Please forgive the quotation marks around "black" and "white when used to denote "race". I do that very intentionally, because they are stupid labels. No human is actually black, nor white...we're all shades or tones of something like brown. Myself, I'm sort of pinkish-beige. Anyway, "black" and "white" as "races" have almost nothing to do with color, but are meant to convey ideas about the character or other presumed essential qualities of individuals, and I've come to think maybe we should all stop taking these labels for granted. I wonder if we don't perpetuate harm to our human family when we fail disclaim the validity of such biologically meaningless, aesthetically inaccurate, and historically political terms used as primary interpersonal identifiers. A friend of mine recently challenged me, asking "Well, what are you supposed to do when you need to distinguish which specific one of several Mikes you know of different ethnicities?" I responded "Gee, I dunno...how much trouble do you have when you know half a dozen "white" people named Chad?" See, it's really not so hard...all we have to do is decide that it matters to stop believing in the myth of "race".