One Morning In The Sea 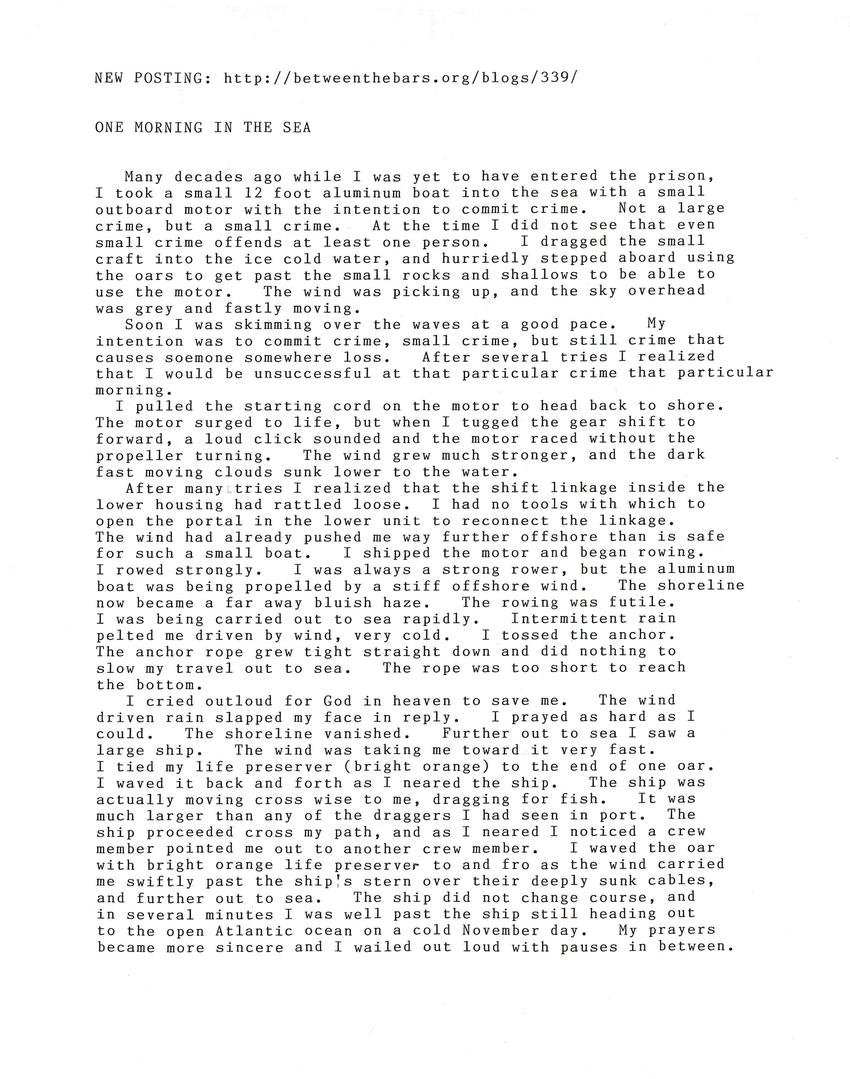 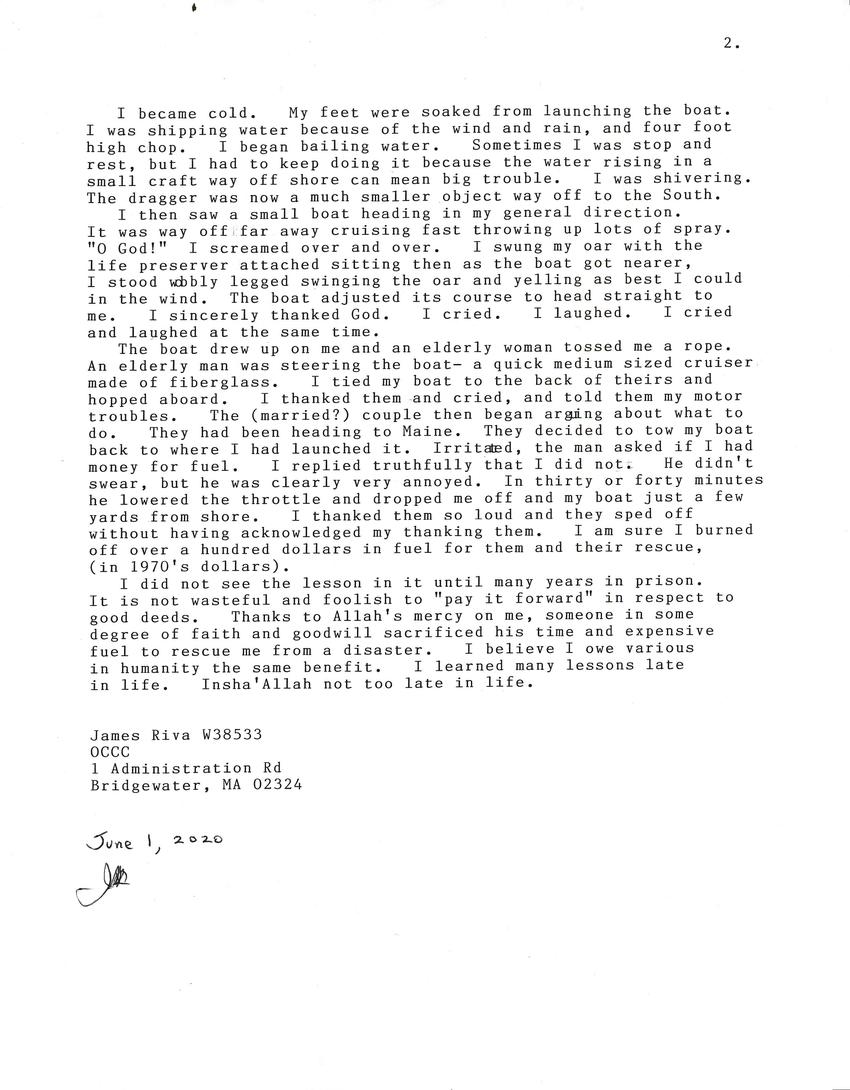 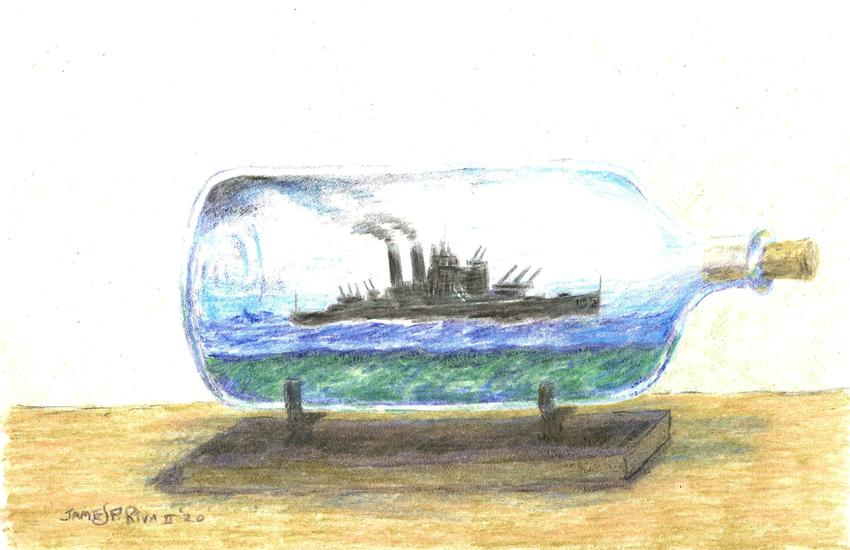 ONE MORNING IN THE SEA

Many decades ago while I was yet to have entered the prison, I took a small 12 foot aluminum boat into the sea with a small outboard motor with the intention to commit crime. Not a large crime, but a small crime. At the time I did not see that even small crime offends at least one person. I dragged the small craft into the ice cold water, and hurriedly stepped aboard using the oars to get past the small rocks and shallows to be able to use the motor. The wind was picking up, and the sky overhead was grey and fastly moving.

Soon I was skimming over the waves at a good pace. My intention was to commit crime, small crime, but still crime that causes someone somewhere loss. After several tries I realized that I would be unsuccessful at that particular crime that particular morning.

I pulled the starting cord on the motor to head back to shore. The motor surged to live, but when I tugged the gear shift to forward, a loud click sounded and the motor raced without the propeller turning. The wind grew much stronger, and the dark fast moving clouds sunk lower to the water.

After many tries I realized that the shift linkage inside the lower housing had rattled loose. I had no tools with which to open the portal in the lower unit to reconnect the linkage. The wind had already pushed me way further offshore than is safe for such a small boat. I shipped the motor and began rowing. I rowed strongly. I was always a strong rower, but the aluminum boat was being propelled by a stiff offshore wind. The shoreline now became a far away bluish haze. The rowing was futile. I was being carried out to sea rapidly. Intermittent rain pelted me driven by wind, very cold. I tossed the anchor. The anchor rope grew tight straight down and did nothing to slow my travel out to sea. The rope was too short to reach the bottom.

I cried outloud for God in heaven to save me. The wind driven rain slapped my face in reply. I prayed as hard as I could. The shoreline vanished. Further out to sea I saw a large ship. The wind was taking me toward it very fast. I tied my life preserver (bright orange) to the end of one oar. I waved it back and forth as I neared the ship. The ship was actually moving cross wise to me, dragging for fish. It was much larger than any of the draggers I had seen in port. The ship proceeded cross my path, and as I neared I noticed a crew member pointed me out to another crew member. I waved the oar with bright orange life preserver to and fro as the wind carried me swiftly past the ship's stern over their deeply sunk cables, and further out to sea. The ship did not change course, and in several minutes I was well past the ship still heading out to the open Atlantic ocean on a cold November day. My prayers became more sincere and I wailed out loud with pauses in between.

I became cold. My feet were soaked from launching the boat. I was shipping water because of the wind and rain, and four foot high chop. I began bailing water. Sometimes I was stop and rest, but I had to keep doing it because the water rising in a small craft way off shore can mean big trouble. I was shivering. The dragger was now a much smaller object way off to the South.

I then saw a small boat heading in my general direction. It was way off far away cruising fast throwing up lots of spray. "O God!" I screamed over and over. I swing my oar with the life preserver attached sitting then as the boat got nearer, I stood wobbly legged swinging the oar and yelling as best I could in the wind. The boat adjusted its course to head straight to me. I sincerely thanked God. I cried. I laughed. I cried and laughed at the same time.

The boat drew up on me and an elderly woman tossed me a rope. An elderly man was steering the boat- a quick medium sized cruiser made of fiberglass. I tied my boat to the back of theirs and hopped aboard. I thanked them and cried, and told them my motor troubles. The (married?) couple then began arguing about what to do. They had been heading to Maine. They decided to tow my boat back to where I had launched it. Irritated, the man asked if I had money for fuel. I replied truthfully that I did not. He didn't swear, but he was clearly very annoyed. In thirty or forty minutes he lowered the throttle and dropped me off and my boat just a few yards from shore. I thanked them so loud and they sped off without having acknowledged my thanking them. i am sure I burned off over a hundred dollars in fuel for them and their rescue, (in 1970's dollars).

I did not see the lesson in it until many years in prison. It is not wasteful and foolish to "pay it forward" in respect to good deeds. Thanks to Allah's mercy on me, someone in some degree of faith and goodwill sacrificed his time and expensive fuel to rescue me from a disaster. I believe I owe various in humanity the same benefit. I learned many lessons late in life. Insha'Allah not to late in life.

Thanks for writing! I finished the transcription for your post. Your story was very riveting.
(scanned reply – view as blog post)
uploaded Sept. 27, 2020.  Original (PDF) 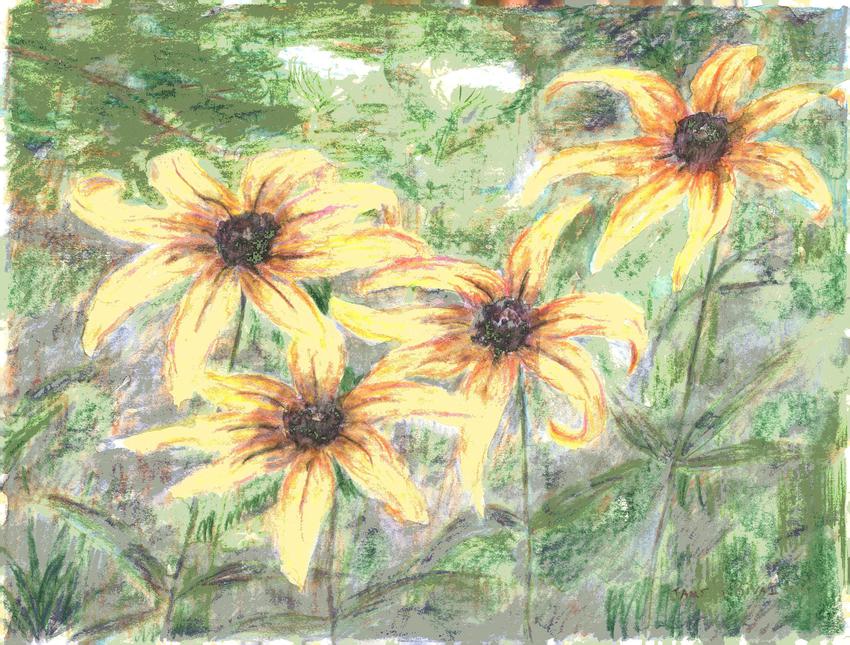 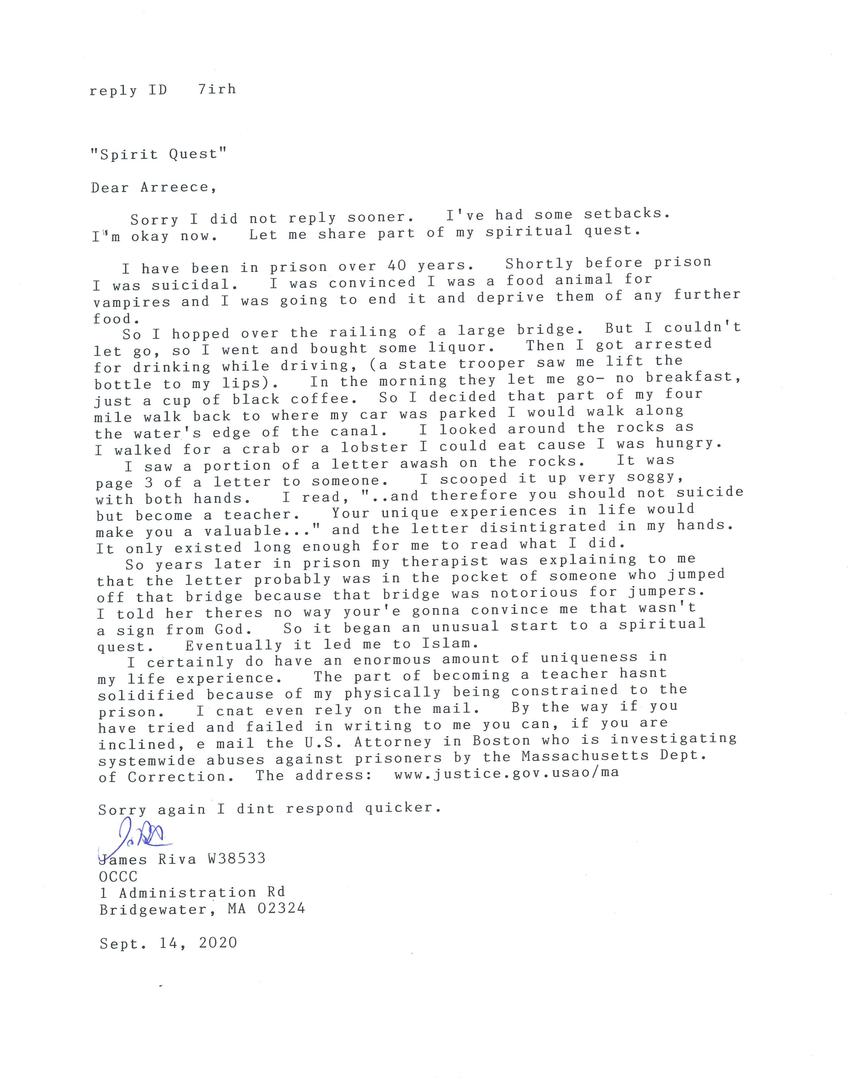 Wow first that drawing is amazing I don't know what medium you use but you used it well. And wow wow that letter portion im speechless that letter showing up in the water for you to read really was a gift from God.
Im so happy you have improved since being suicidal and are now on spiritual journey.
(scanned reply – view as blog post)
uploaded May 22, 2021.  Original (PDF) 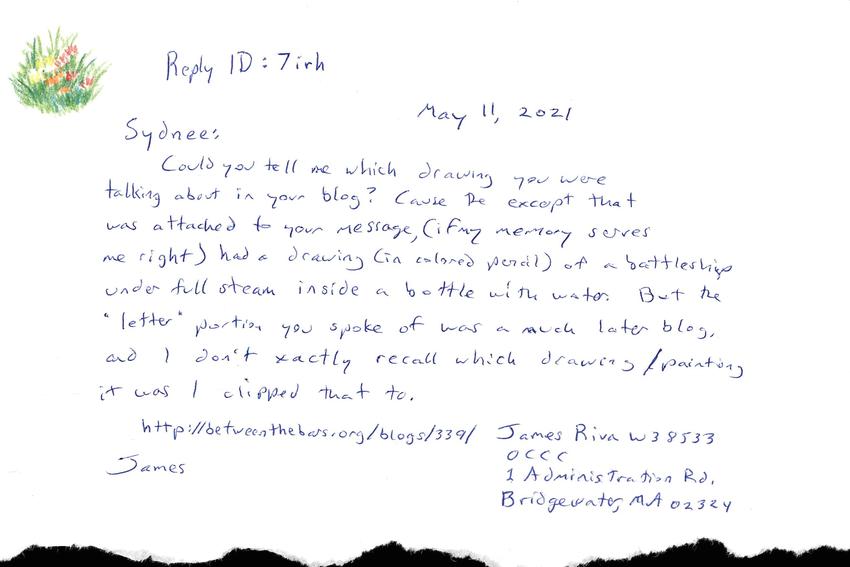 Could you tell me which drawing you were talking about in your blog? Cause Re except that was attached to your message, (if my memory serves me right) had a drawing (in colored pencil) of a battleship under full steam inside a bottle with water. But the "letter" portion you spoke of was a much later blog, and I don't xactly recall which drawing/painting it was I clipped that to. 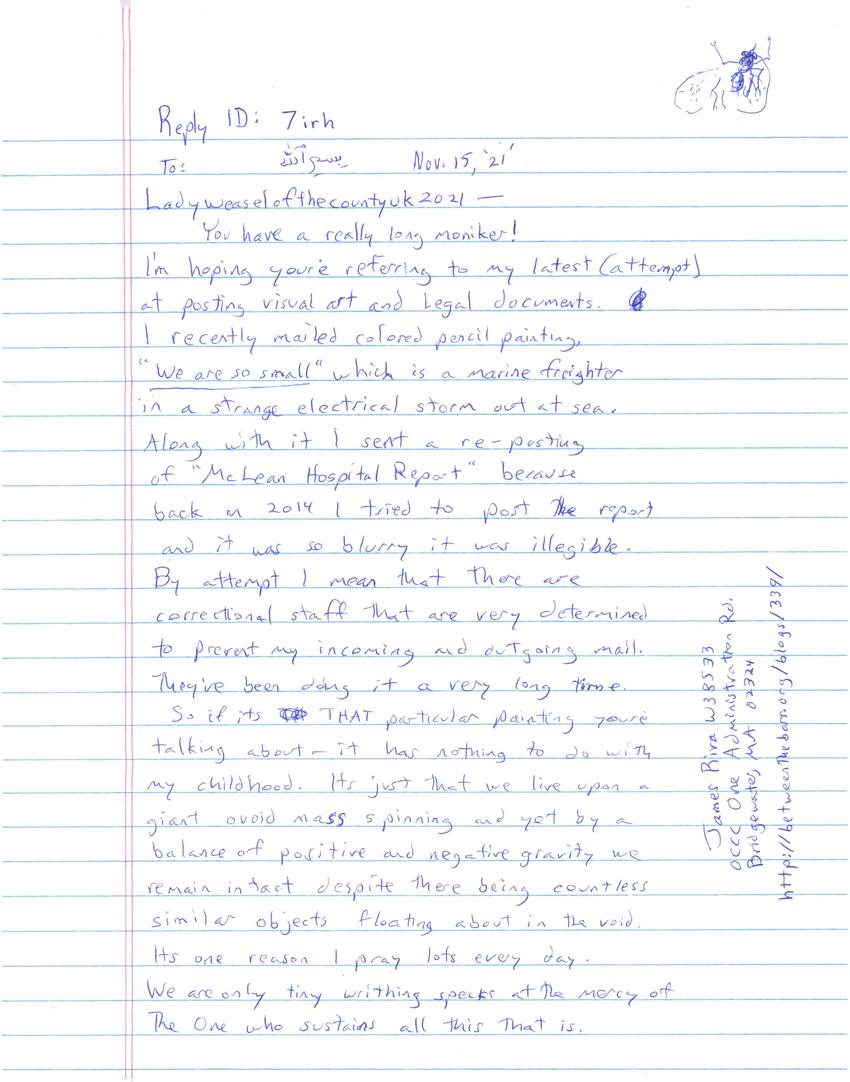