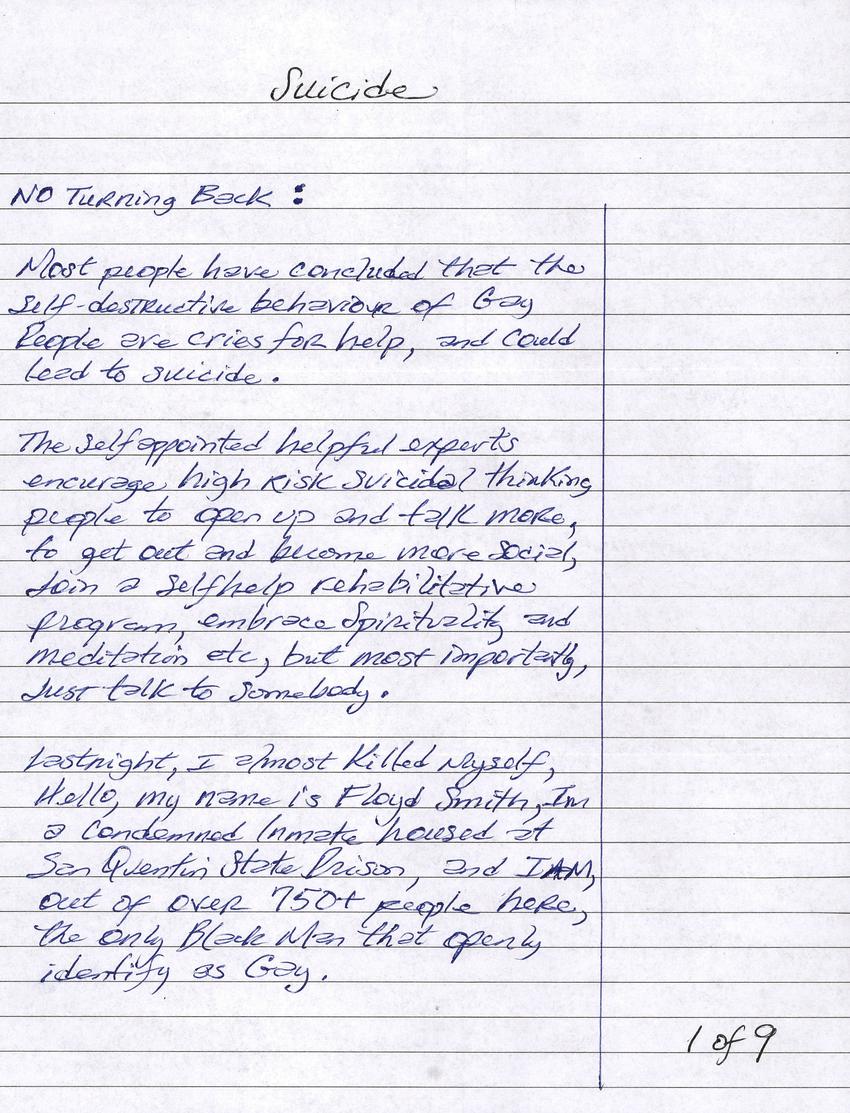 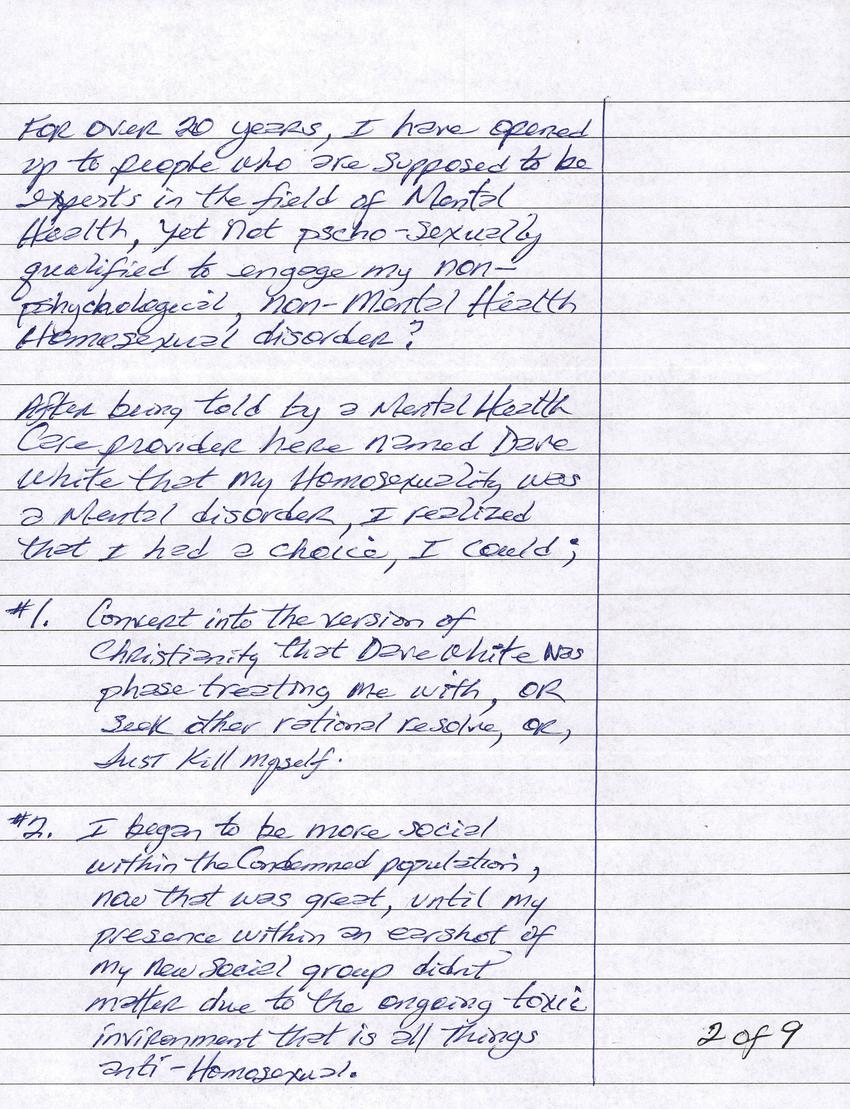 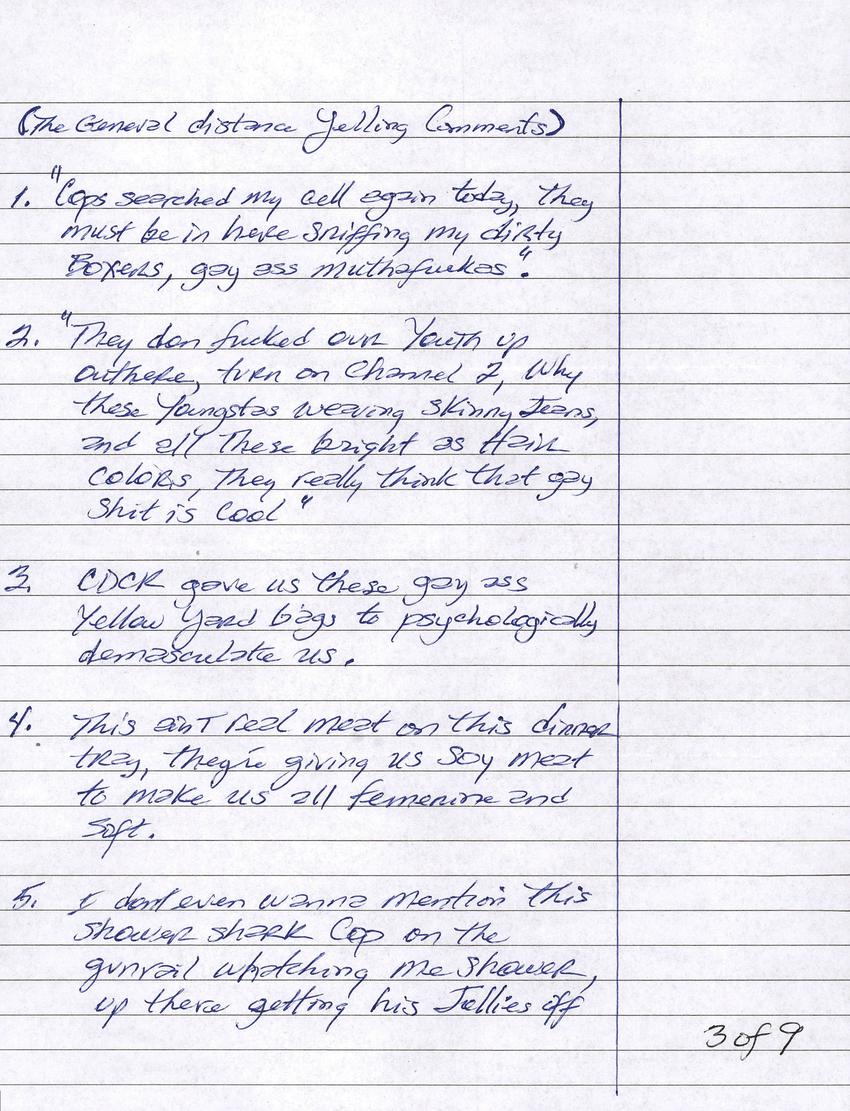 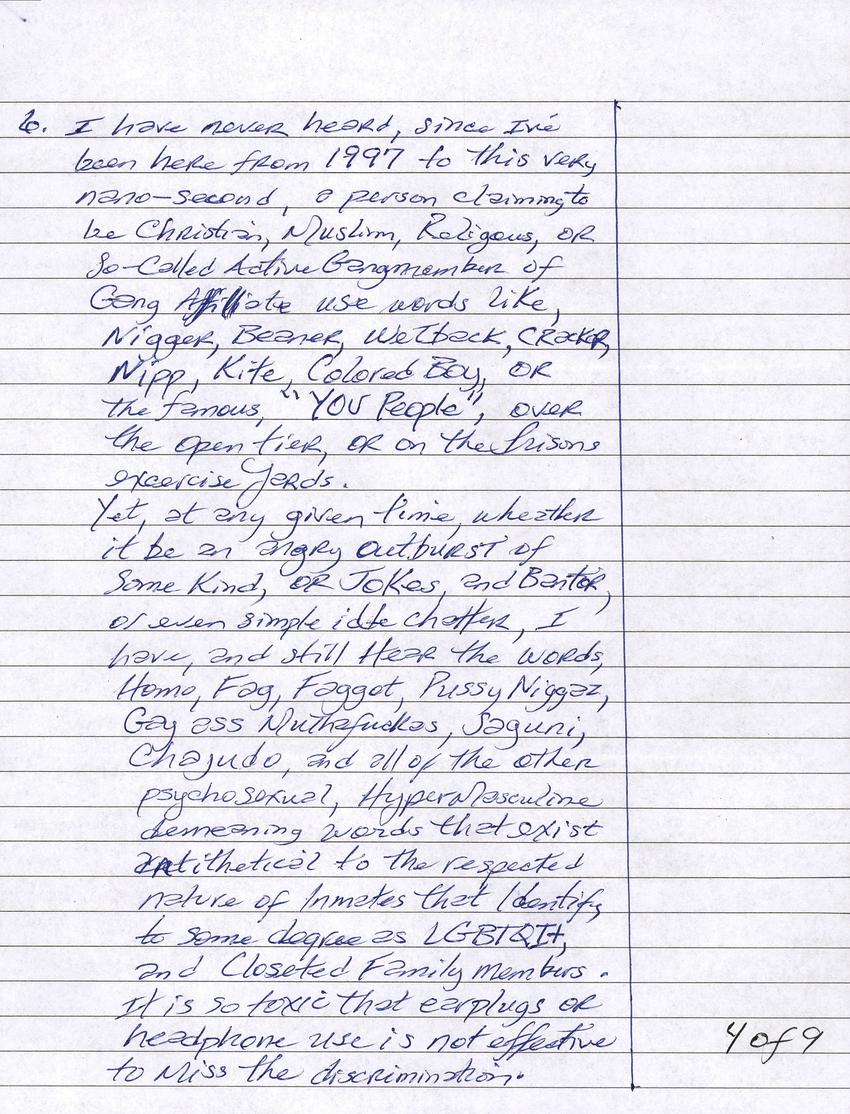 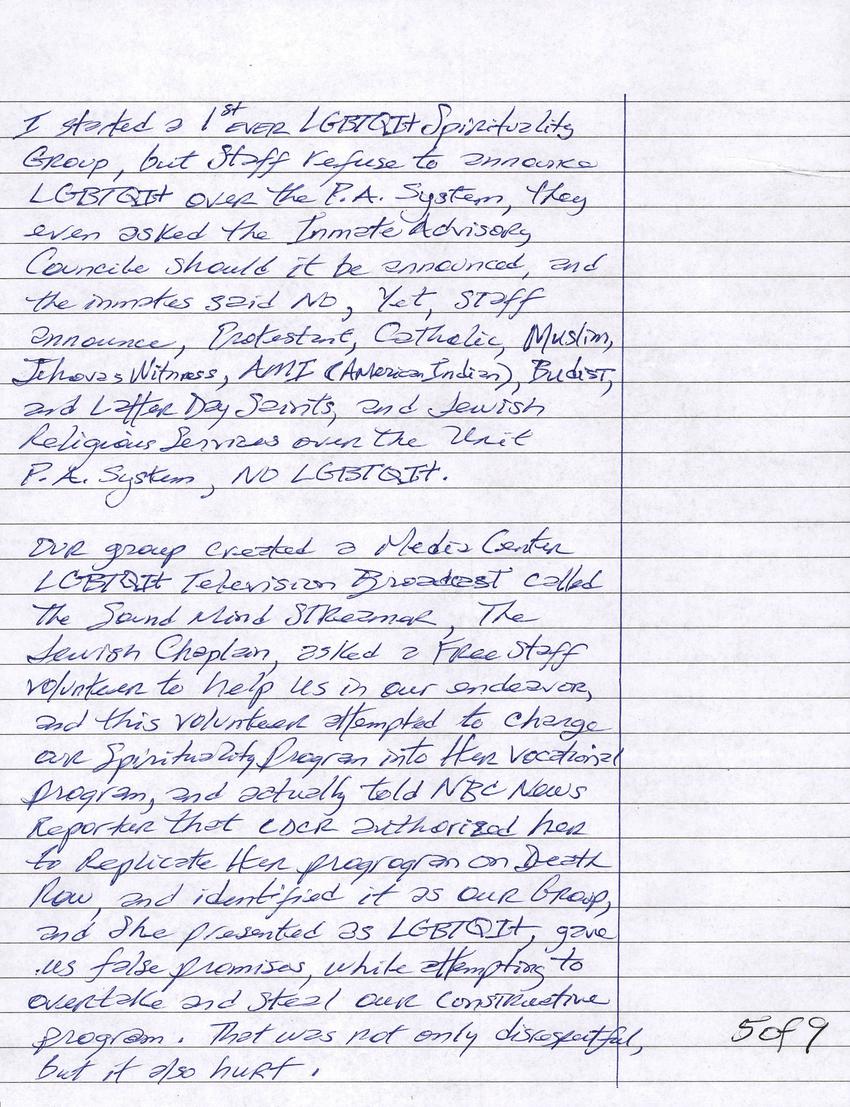 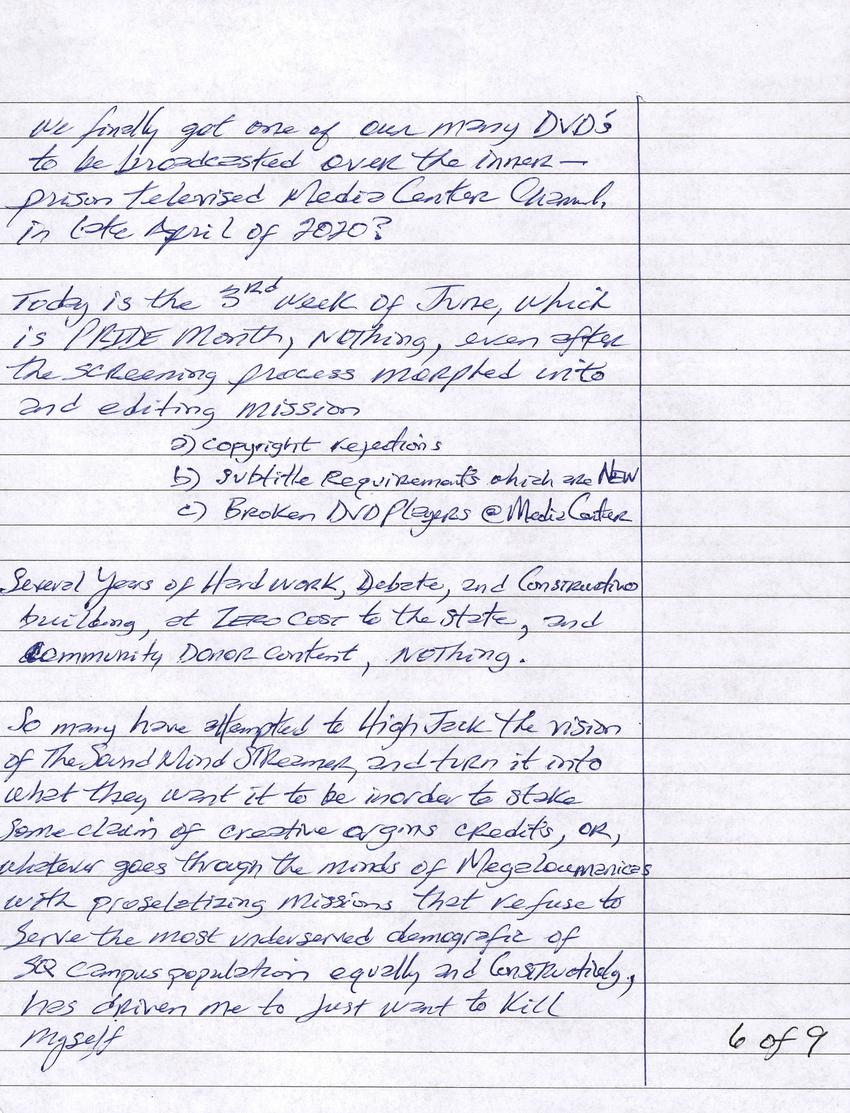 Most people have concluded that the self-destructive behavior of Gay people are cries for help, and could lead to suicide.

The self appointed helpful experts encourage high risk suicidal thinking people to open up and talk more, to get out and become more social, join a self help rehabilitative program, embrace spirituality and mediation etc, but most importantly, just talk to somebody.

Last night, I almost killed myself, Hello my name is Floyd Smith, I'm a condemned inmate housed at San Quentin State Prison, 2nd IAM, out of over 750+ people here, the only Black Man that openly identify as Gay.

For over 20 years, I have opened up to people who are supposed to be experts in the field of mental health, yet not psycho-sexually qualified to engage my non-pyschological, non-mental health homosexual disorder?

After being told by a mental health care provider here named Dave White that my homosexuality was a mental disorder, I realized that I had a choice, I could;

#1. Convert into the version of Christianity that Dave White was phase treating me with, OR seek other rational resolve, or, just kill myself.

#2. I began to be more social within the Condemned population, now that was great, until my presence within an earshot of my new social group didn't matter due to the ongoing toxic environment that is all things anti-homosexual.

1. "Cops searched my cell again today, they must be in here sniffing my dirty boxers, gay ass muthafuckas."

2. "They don fucked our Youth up out there, turn on Channel 2, why these youngstas wearing skinny jeans, and all these bright as hell colors, they really think that gay shit is cool"

3. CDCK gave us these gay ass yellow yard bags to psychologically demasculate us.

4. This ain't real meat on this dinner tray, they're giving us soy meat to make us all feminine and soft.

5. I don't even wanna mention this shower shark cop on the gunrail watching me shower, up there getting his jellies off

6. I have never heard, since I've been here from 1997 to this very nano-second, a person claiming to be Christian, Muslim, Religious, or so-called active gang member of Gang affiliate use words like, nigger, beaner, wetback, cracker, nipp, kite, colored boy, or the famous, "YOU PEOPLE", over the open tier, or on the Prison's exercise yards.
Yet, at any given time, whether it be an angry outburst of some kind, or jokes, and banter, or even simple idle chatter, I have, and still hear the words, Homo, Fag, Faggot, Pussy Niggaz, Gay ass muthafuckas, Saguni, Chajudo, and all of the other psychosexual, Hypermasculine demeaning words that exist antithetical to the respected nature of inmates that identify to some degree as LGBTQI+, and closeted family members. It is so toxic that earplugs or headphone use is not effective to miss the discrimination.
I started a 1st ever LGBTQI+ Spirituality group, but staff refuse to announce LGBTQI+ over the P.A. system, they even asked the inmate advisors council should it be announced and the inmates said no, yet, staff announce, protestant, catholic, Muslim, Jehovah's Witness, AMI (American Indian), Budist [Buddhist], and Letter Day Saints, and Jewish Religious services over the unit P.A. System, NO LGBTQI+.

Our group created a Media Center LGBTQI+ Television Broadcast called The Sound Mind Streamer, The Jewish Chaplan, asked a free staff volunteer to help us in our endeavor, and this volunteer attempted to change our spirituality program into her vocational program, and actually told NBC News reporter that CDCR authorized her to replicate her program on Death Row, and identified it as our group, and she presented as LGBTQI+, gave us false promises, while attempting to overtake and steal our constructive program. That was not only disrespectful, but it also hurt.
We finally got one of our many DVD's to be broadcasted over the inner-prison televised Media Center Channel, in late April of 2020?

Today is the 3rd week of June, which is PRIDE Month, nothing, even after the screening process morphed into and editing mission
a) copyright rejections
b) subtitle requirements which are NEW
c) Broken DVD Players @ Media Center

Several years of hard work, debate, and construction building, at ZERO COST to the state, and community donor content, nothing.

So many have attempted to highjack the vision of The Sound Mind Streamer, and turn it into what they want it to be in order to stake some claim of creative origins credits, or, whatever goes through the minds of Megalomaniacs with proselytizing missions that refuse to serve the most underserved demographic of SQ Campus population equally and constitutionally, has driven me to just want to kill myself.

Not being able to have a direct constructive effect on a situation where inmates spit, and toss water, urine, and feces and dirty condoms on gay inmates, who are beaten up, and forced into protective custody programming is enough for me to return to my most self-destructive self, the version of the prisoner that even the 6'o'clock news pays attention to.

When I am self-destructive and dying, alot of peoples official capacity is active, when I am self-constructive and living, the desperation of the action-oriented and authorized had me about to kill myself last night.

Even after we requested prison officials to give us institutional policy-related information to allow donors to donate industrial DVD players to replace the broken DVD players in the SQ Media Center, Nothing, no response.

There is a great misconception that gays, especially gay youth kill themselves because they are gay, when the fact is, gay people commit suicide because of the negative and rejection responses from family, church, and community that drives on to suicide.

For example, an urban perspective LGBTQI+ movie titled Moonlight, won an Academy Award for Best Picture was "privately screened in a prison chapel", perhaps some kind of beta test? It was said that inmates was repulsed, and some walked out, so it was decided not to broadcast the video of the film at SQSP. The story of a gay black boy, growing up in the hood, rejected, and screened in a hostile environment where homosexuality is viewed as an abomination of God.

Nobody ask Gay prisoners to screen Heterosexual movies in prison, and movies about white musicians like Elton John, and The Band Queen have been broadcasted, which is a clear racist implicit bias, and selective morality discrimination issue. Someone said yesterday, that the Bible says that "There is a time and place for everything!" Please try not to imagine how many times serial killers, child molestors, and gang members have quoted Bible and Quaran scriptures "at Me", So, yesterday, I said, "What about suicide?"

That comment alone left me with the Muslim population to engage for the remainder of the conversation, so I asked them, will Allah bless me with 70 virgin men, and live forever in paradise? Especially if I Martyr myself for my beliefs?

They to became silent, but not without a snide chuckle, so, I sat on the edge of the Bunk and said, I think this may be the time for me to kill myself, I fell into a deep sleep, awoke today and began to write this experience