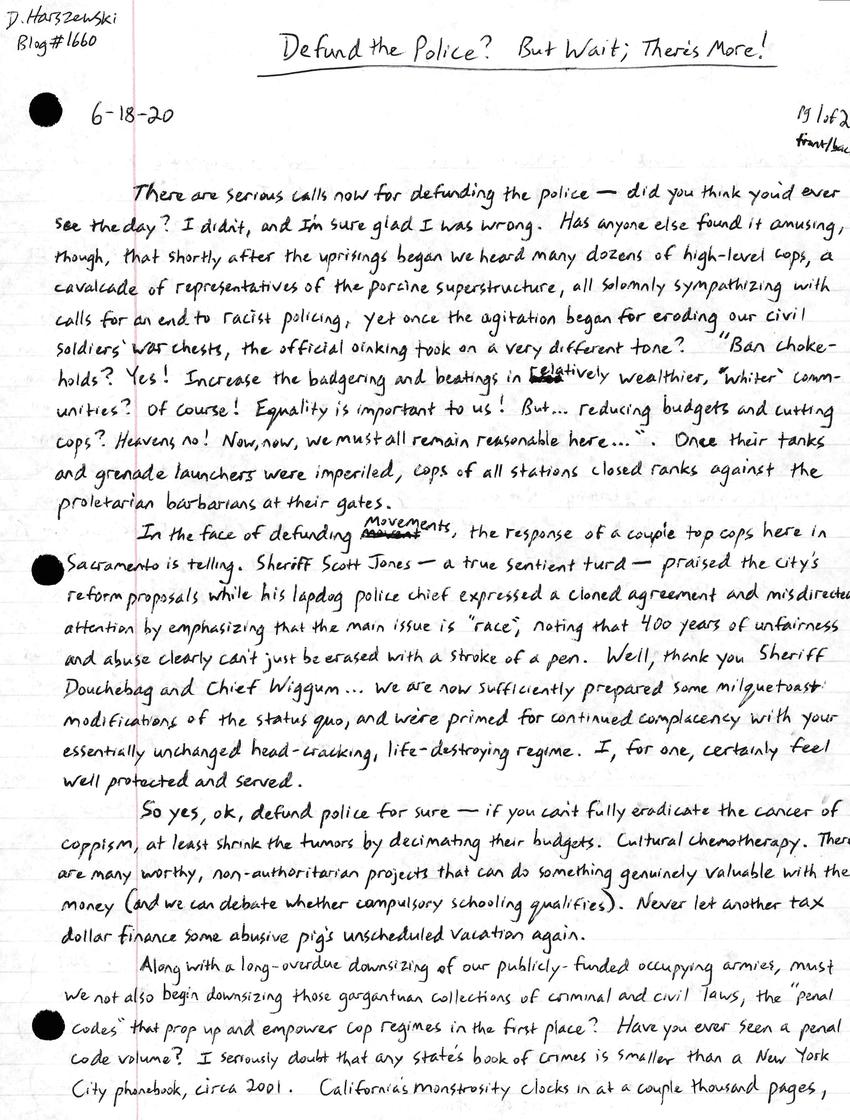 There are serious calls now for defunding the police - did you think you'd ever see the day? I didn't, and I'm sure glad I was wrong. Has anyone else found it amusing, though, that shortly after the uprisings began we heard many dozens of high-level cops, a cavalcade of representatives of the porcine superstructure, all solemnly sympathizing with calls for an end to racist policing, yet once the agitation began for eroding our civil soldiers' war chests, the official oinking took on a very different tone? "Ban choke-holds? Yes! Increase the badgering and beatings in relatively wealthier, "whiter" communities? Of course! Equality is important to us! But...reducing budgets and cutting cops? Heavens no! Now, now, we must all remain reasonable here..." Once their tanks and grenade launchers were imperiled, cops of all stations closed ranks against the proletarian barbarians at their gates.

In the face of defunding movements, the response of a couple top cops here in Sacramento is telling. Sheriff Scott Jones - a true sentient turd - praised the city's reform proposals while his lapdog police chief expressed a cloned agreement and misdirected attention by emphasizing that the main issue is "race." noting that 400 years of unfairness and abuse clearly can't just be erased with a stroke of a pen. Well thank you Sheriff Douchebag and Chief Wiggum...we are now sufficiently prepared some milquetoast modification of the status quo, and we're primed for continued complacency with your essentially unchanged head-cracking, life-destroying regime. I, for one, certainly feel well protected and served.

So yes, ok, defund police for sure - if you can't fully eradicate the cancer of coppism, at least shrink the tumors by decimating their budgets. Cultural chemotherapy. There are many worthy, non-authoritarian projects that can do something genuinely valuable with the money (and we can debate whether compulsory schooling qualifies). Never let another tax dollar finance some abusive pigs unscheduled vacation again.

Along with a long-overdue downsizing of our publicly-funded occupying armies, must we not also begin downsizing those gargantuan collections of criminal and civil laws, the "penal codes" that prop up and empower cop regimes in the first place? Have you ever seen a penal code volume? I serious doubt that any state's book of crimes is smaller than a New York City phone book, circa 2001. California's monstrosity clocks in at a couple thousand pages, and beginning around 2002, it's been printed on thinner and thinner paper every few years just to prevent it from looking and feeling as ridiculous as it actually is. True story!*

If we're going to defund cops, as we plainly should, then we should also work on curbing our enthusiasm for creating new laws and punishments every year. As I've said before, I have a tendency toward anarchism, so personally I'd just add "Defund the Legislatures" to our call for justice, but for now let's go ahead and keep assuming that lawmakers serve some purpose beyond simply stoking fear to ensure their re-elections. Can I suggest...ask your congressmen/women why THEY think we need thousands upon thousands of pages of punitive laws, especially when we're all sick of cops beating up and shooting us in the name of "law enforcement." After all, beyond the "Big Three" prohibitions against Murder, Rape, and Robbery, how many more criminal statutes do we really need? A few, maybe, and I know we all have our pet favorites; some might even be worthy of retaining. But seriously...don't you think you could cover every "crime" you're concerned about, in, oh, 30 or 40 pages? Honestly, that estimate seems generous to me - I think I could do with 4 or 5 pages total, probably. Either way, what we actually have are THOUSANDS of pages, and...well, how's this for a practical proposal? I'd say, why don't we pay our elected representatives a bonus for every legitimate, verified contradiction of documented "legislative intent" and any resolutions or proclamations of dubious "fact" that support existing laws? We cold double the bonus if they manage to persuade enough of their colleagues to actually remove a law from the books. Remember, lawmakers will still answer to their constituents (the ppl who can vote them out), so they'd also need to be persuasive to average citizens too. Come to think of it, could this be a remedy for the current norm of fear-mongering? Call it "truth-mongering" ? "reason mongering"? Actually, there is a term for it...critical thinking.

I say let's get a referendum started; let's pass this into law. Oh, wait...

*(Basically true story. I don't have the latest penal code nearby to actually count the pages, but its a close guess, I believe. Also, I don't recall exactly when the CA penal code began using progressively thinner paper, but it was 2002 give or take 5 years. I believe the most popular code publisher also used to include more CA codes than just the criminal one, but began cutting those out for the same rason...the book had gotten too dang thick!)