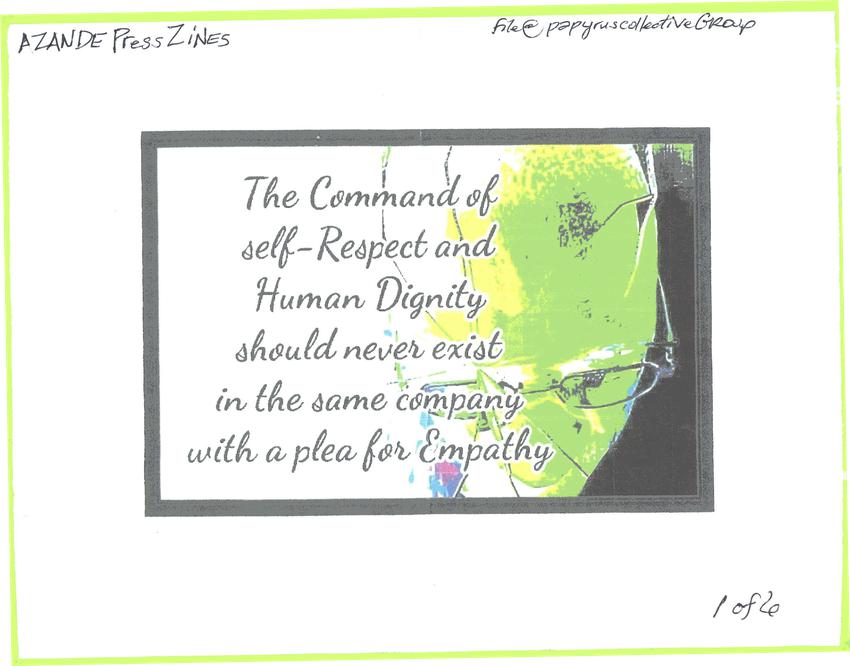 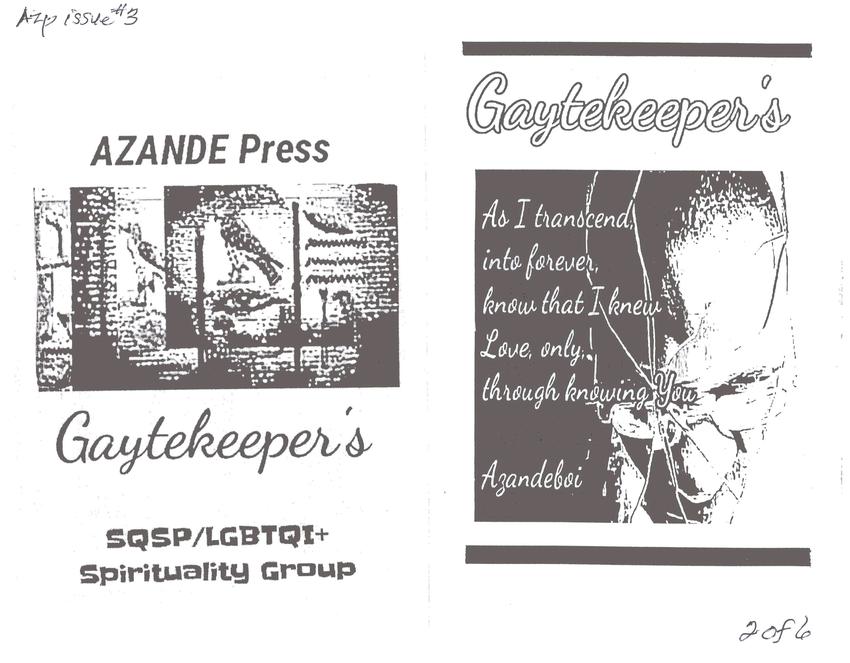 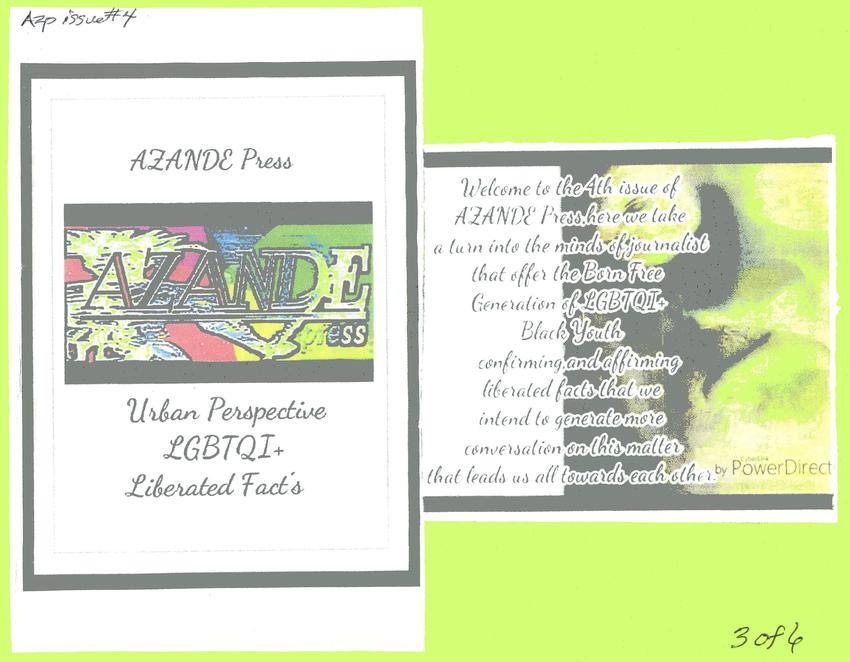 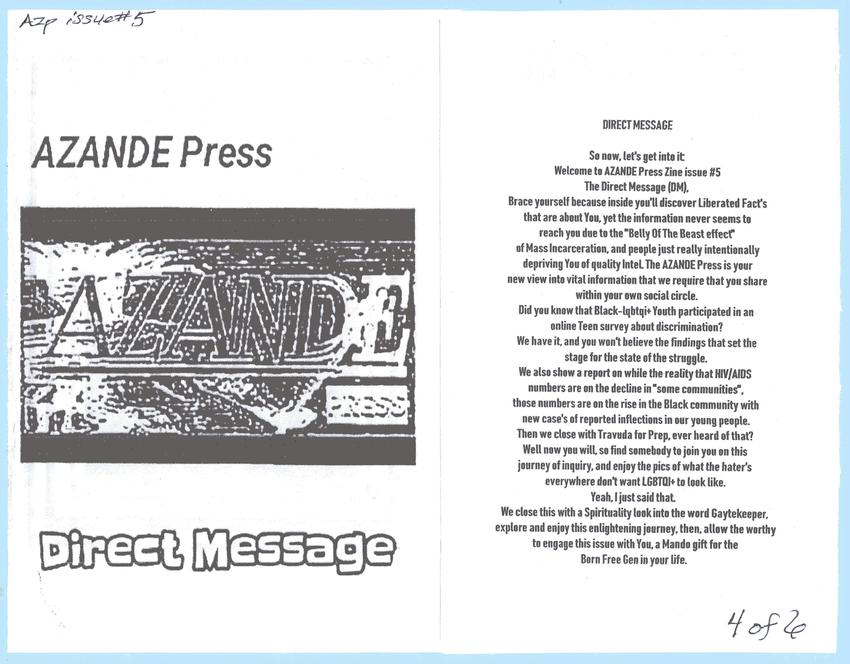 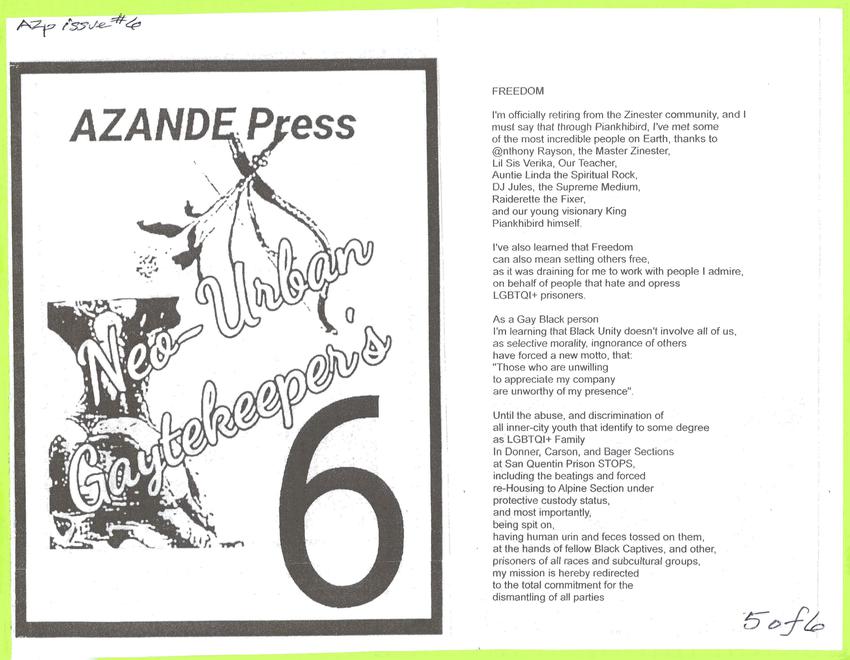 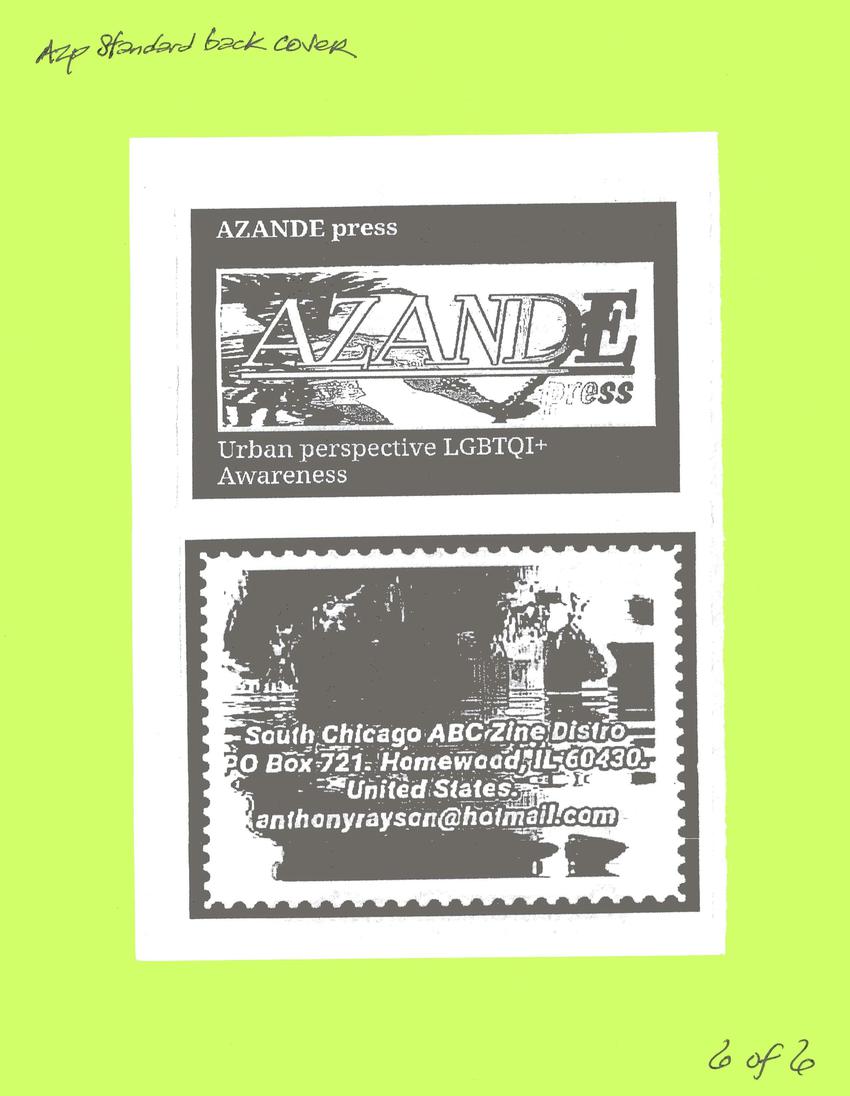 As I transcend,
into forever,
know that I knew
Love, only
through knowing you - Agandeboi

Welcome to the 4th issue of
AZANDE Press, here we take
a look into the minds of journalist
that offer the Born Free
Generation of LGBTIQI+
Black Youth
confirming and affirming
liberated facts that we
intend to generate more
conversation on this matter
that leads us all towards each other.

So now, let's get into it
Welcome to AZANDE Press Zine issue #5
The direct Message (DM).
Brace yourself because inside you'll discover Liberated Fact's
that are about You, yet the information never seems to
reach you due to the "Belly of the Beast effect"
of Mass Incarceration, and people just really intentionally
depriving You of quality Intel. The AZANDE Press is your
new view into vital information that we require that you share
within your own social circle.
Did you know that Black-lgbtiq+ Youth participated in an
online Teen survey about discrimination?
We have it, and you won't believe the findings that set
the stage for the state of the struggle.
We also show a report on while the reality that HIV/AIDS
numbers are on the decline in "some communities",
those numbers are on the rise in the Black community with
new case's of reported inflections in our young people.
Then we close with Travuda for Prep, ever heard of that?
Well, now you will, so find somebody to join you on this
journey of inquiry, and enjoy the pics of what the hater's
everywhere don't want LGBTQI+ to look like.
Yeah, I just said that.
We close this with a Spirituality look into the word Gaytekeeper,
explore and enjoy this enlightening journey, then allow the worthy
to engage this issue with You, a Mando gift for the
Born Free Gen in your life.

I'm officially retiring from the Zinester community, and I
must say that through Piankhibird, I've met some
of the most incredible people on Earth, thanks to
@nthony Rayson, the Master Zinester,
Lil Sis Verika, Our Teacher,
Auntie Linda the Spiritual Rock,
DJ Jules, the Supreme Medium,
Raiderette the Fixer,
and our young visionary King
Piankhibird himself.

I've also learned that Freedom
can also mean setting others free,
as it was draining for me to work with people I admire,
on behalf of people that hate and oppress
LGBTQI+ prisoners.

As a Gay Black person
I'm learning that Black Unity doesn't involve all of us,
as selective morality, ignorance of others
have forced a new motto, that:
"Those who are unwilling
to appreciate my company
are unworthy of my presence."

Until the abuse, and discrimination of
all inner-city youth that identify to some degree
as LGBTQI+ Family
in Donner, Carson, and Bager Sections
at San Quentin Prison STOPS,
including the beatings and forced
re-Housing to Alpine Section under
protective custody status,
and most importantly,
being spit on,
having human urine and feces tossed on them,
at the hands of fellow Black Captives, and other,
prisoners of all races and subcultural groups,
my mission is hereby redirected
to the total commitment for the
dismantling of all parties