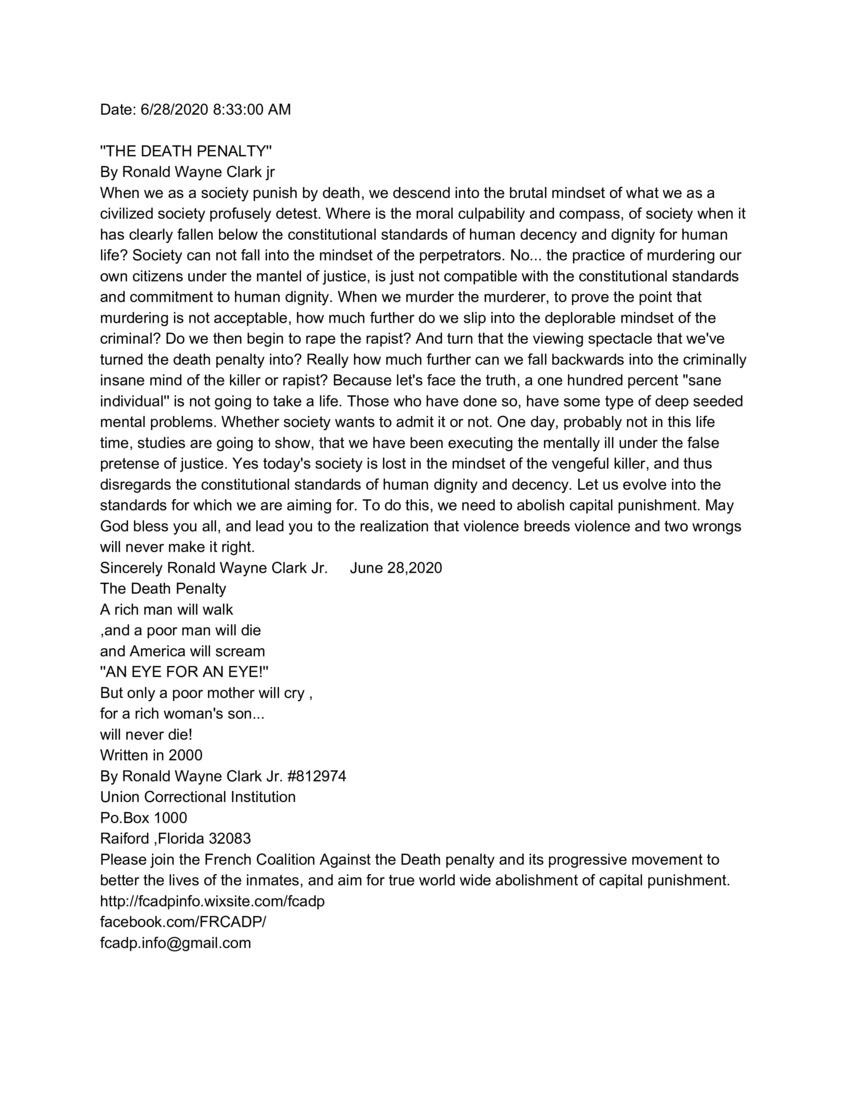 "THE DEATH PENALTY"
By Ronald Wayne Clark jr
When we as a society punish by death, we descend into the brutal mindset of what we as a civilised society profusely detest. Where is the moral culpability and compass, of society when it has clearly fallen below the constitutional standards of human decency and dignity for human life? Society can not fall into the mindset of the perpetrators. No... the practice of murdering our own citizens under the mantel of justice, is just not compatible with the constitutional standards and commitment to human dignity. When we murder the murderer, to prove the point that murdering is not acceptable, how much further do we slip into the deplorable mindset of the criminal? Do we then begin to rape the rapist? And turn that the viewing spectacle that we've turned the death penalty into? Really how much further can we fall backwards into the criminally insane mind of the killer or rapist? Because let's face the truth, a one hundred percent "sane individual" is not going to take a life. Those who have done so, have some type of deep seeded mental problems. Whether society wants to admit it or not. One day, probably not in this life time, studies are going to show, that we have been executing the mentally ill under the false pretence of justice. Yes today's society is lost in the mindset of the vengeful killer, and thus disregards the constitutional standards of human dignity and decency. Let us evolve into the standards for which we are aiming for. To do this, we need to abolish capital punishment. May God bless you all, and lead you to the realisation that violence breeds violence and two wrongs will never make it right.
Sincerely Ronald Wayne Clark Jr. June 28, 2020

The Death Penalty
A rich man will walk,
and a poor man will die
and America will scream
"AN EYE FOR AN EYE!"
But only a poor mother will cry,
for a rich woman's son...
will never die!
Written in 2000
By Ronald Wayne Clark Jr. #812974
Union Correctional Institution
Po. Box 1000
Raiford, Florida 32083
Please join the French Coalition Against the Death penalty and its progressive movement to better the lives of the inmates, and aim for true world wife abolishment of capital punishment.
http://fcadpinfo.wixsite.com/fcadp
facebook.com/FRCADP/
fcadp.info@gmail.com