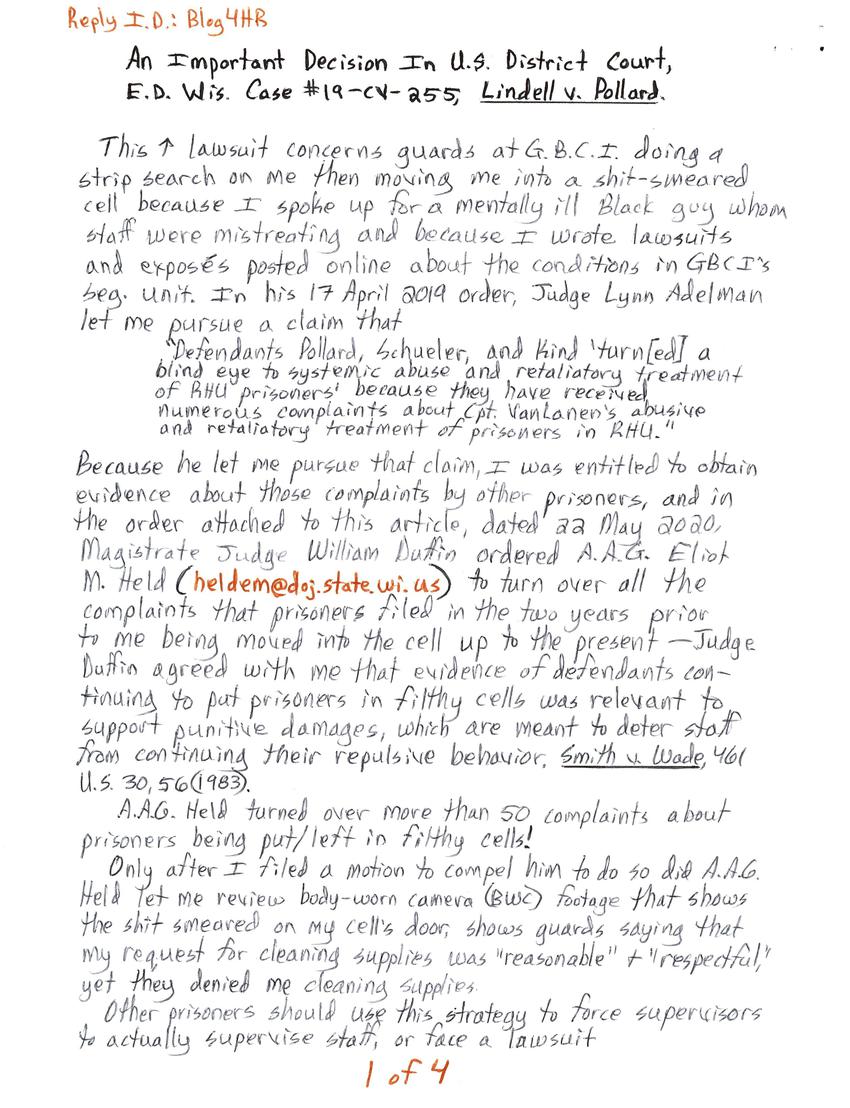 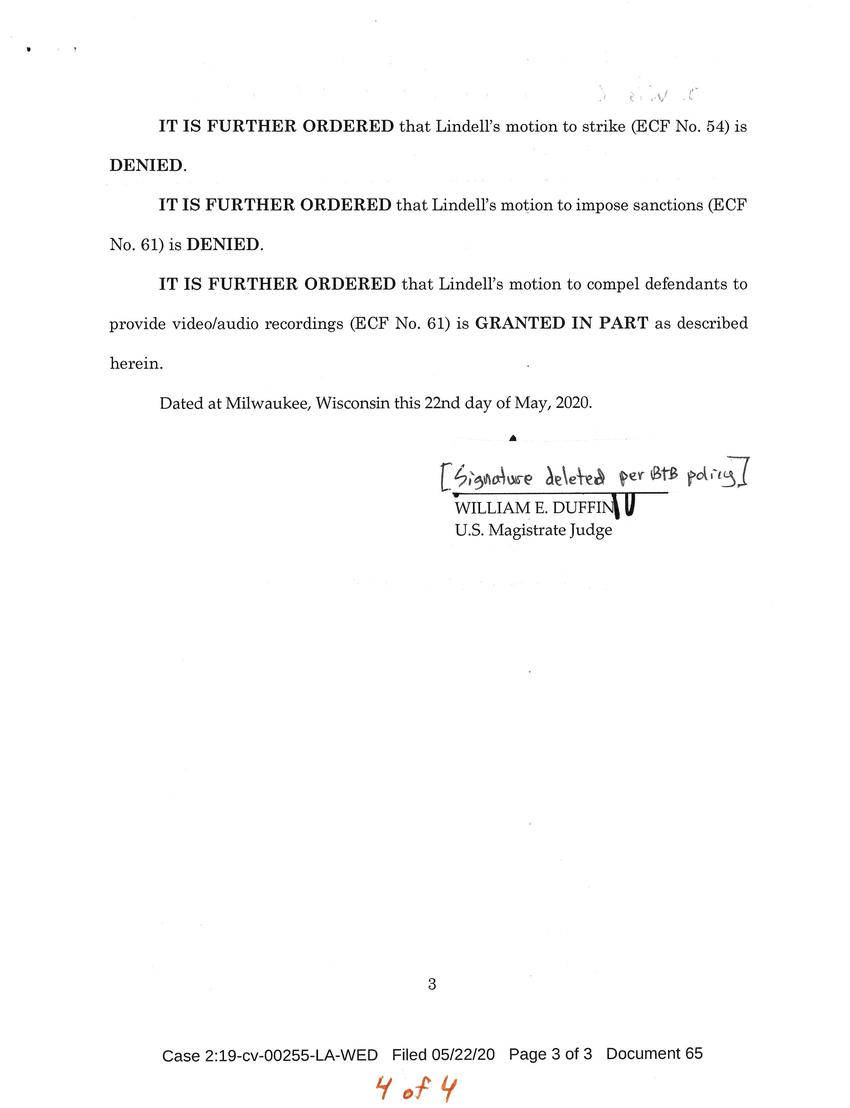 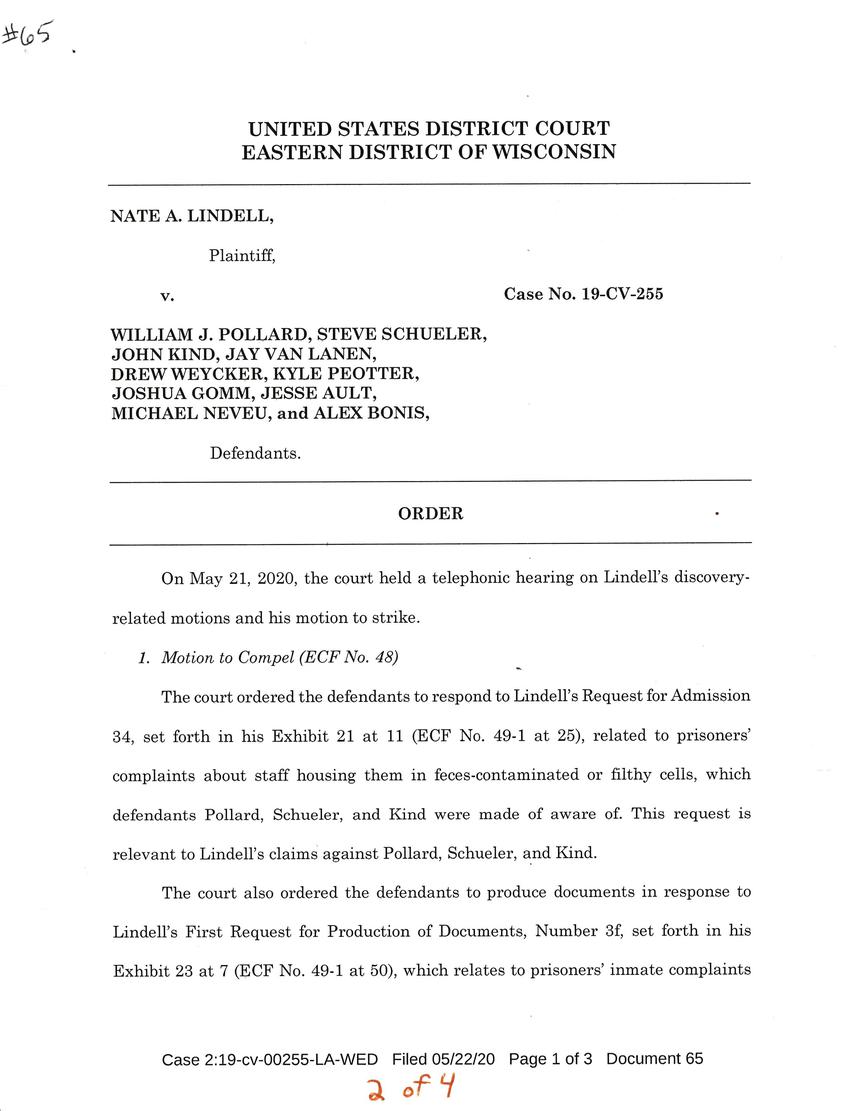 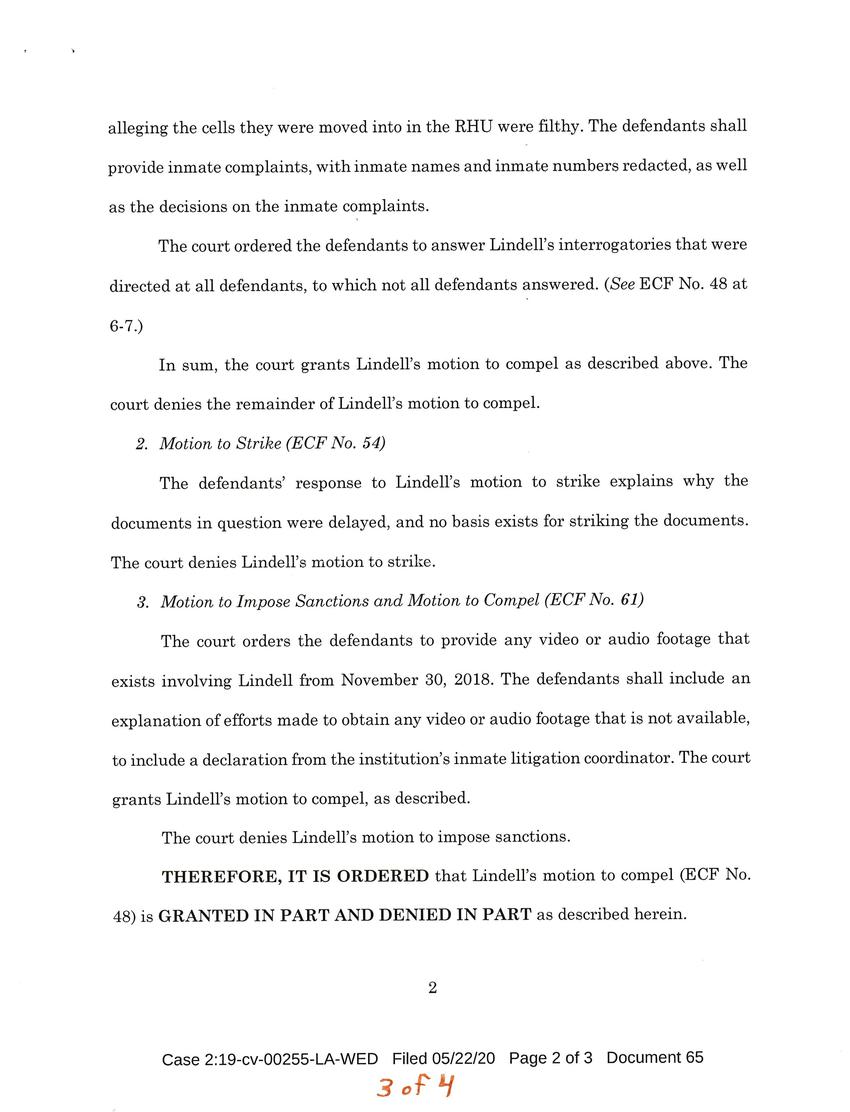 This lawsuit concerns guards at G.B.C.I doing a strip search on me, then moving me into a shit-smeared cell because I spoke up for a mentally ill Black guy whom staff were mistreating and because I wrote lawsuits and exposés posted online about the conditions in GBCI's beg. unit. In his 17 April 2019 order, Judge Lynn Adelman let me pursue a claim that
"Defendants Pollard, Schueler, and Kind 'turn[ed] a blind eye to systemic abuse and retaliatory treatment of RHU prisoners' because they have received numerous complaints about Cpt. VanLanen's abusive and retaliatory treatment of prisoners in RHU."

Because he let me pursue that claim, I was entitled to obtain evidence about those complaints by other prisoners, and in the order attached to this article, dated 22 May 2020, Magistrate Judge William Duffin ordered A.A.G. Eliot M. Held (heldem@doj.state.wi.us) to turn over all the complaints that prisoners filed in the two years prior to me being moved into the cell up to the present — Judge Duffin agreed with me that evidence of defendants continuing to put prisoners in filthy cells was relevant to support punitive damages, which are meant to deter staff form continuing their repulsive behavior. Smith v. Wade, 461 U.S. 30,56(1983)

A.A.G Held turned over more than 50 complaints about prisoners being put/left in filthy cells!

Only after I filed a motion to compel him to do so did A.A.G Held let me review body-worn camera(BWC) footage that shows the shit smeared on my cell's door, shows guards saying that my request for cleaning supplies was "reasonable" + "respectful", yet they denied me cleaning supplies.

Other prisoners should use this strategy to force supervisors to actually supervise staff, or face a lawsuit.

IT IS FURTHER ORDERED that Lindell's motion to strike (ECF No. 54) is DENIED.

IT IS FURTHER ORDERED that Lindell's motion to impose sanctions (ECF NO. 61) is DENIED.

IT IS FURTHER ORDERED that Lindell's motion to compel defendants to provide video/audio recordings (ECF No.61) is GRANTED IN PART as described herein.

On May 21, 2020, the court held a telephonic hearing on Lindell's discovery-related motions and his motion to strike.

1.Motion to Compel (ECF No. 48)
The court ordered the defendants to respond to Lindell's Request for Admission 34, set forth in his Exhibit 21 at 11 (ECF No. 49-1 at 25), related to prisoners' complaints about staff housing them in feces-contaminated or filthy cells, which defendants Pollard, Schueler, and Kind were made of aware of. This request is relevant to Lindell's claims about Pollard, Schueler, and Kind.

The court also ordered the defendants to produce documents in response to Lindell's First Request for Production of Documents, Number 3f, set forth in his Exhibit 23 at 7 (ECF No. 49-1 at 50), which relates to prisoners' inmate complaints alleging the cells they were moved into in the RHU were filthy. The defendants shall provide inmate complaints, with inmate names and inmate numbers redacted, as well as the decisions on the inmate complaints.

3. Motion to Impose Sanctions and Motion to Compel (ECF No. 61)
The court orders the defendants to provide any video or audio footage that exists involving Lindell from November 30, 2018. The defendants shall include an explanation of efforts made to obtain any video or audio footage that is not available, to include a declaration from the institution's inmate litigation coordinator. The court grants Lindell's motion to compel, as described.

THEREFORE, IT IS ORDERED that Lindell's motion to compel (ECF No. 48) is GRANTED IN PART AND DENIED IN PART as described herein.

I tried the best I could to structure it so that people can read it thoroughly and be able to understand it. I think I did a good job.

Either way, I hope you win the case.