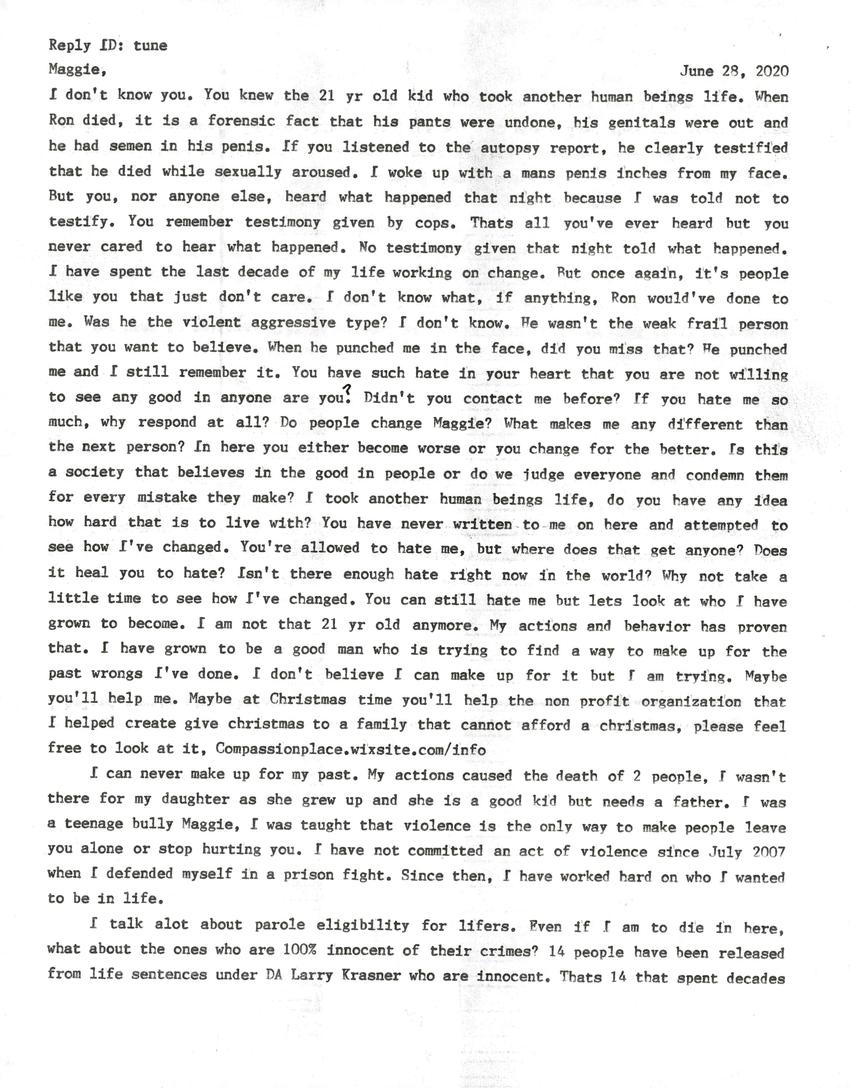 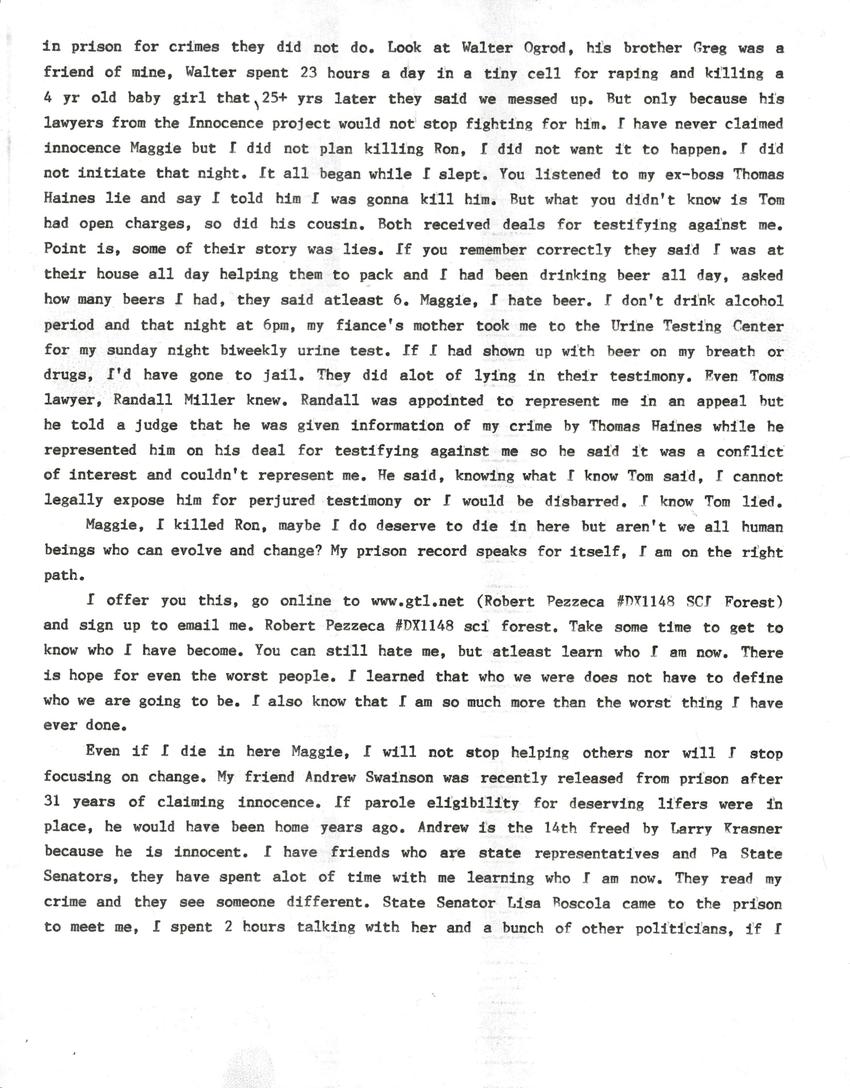 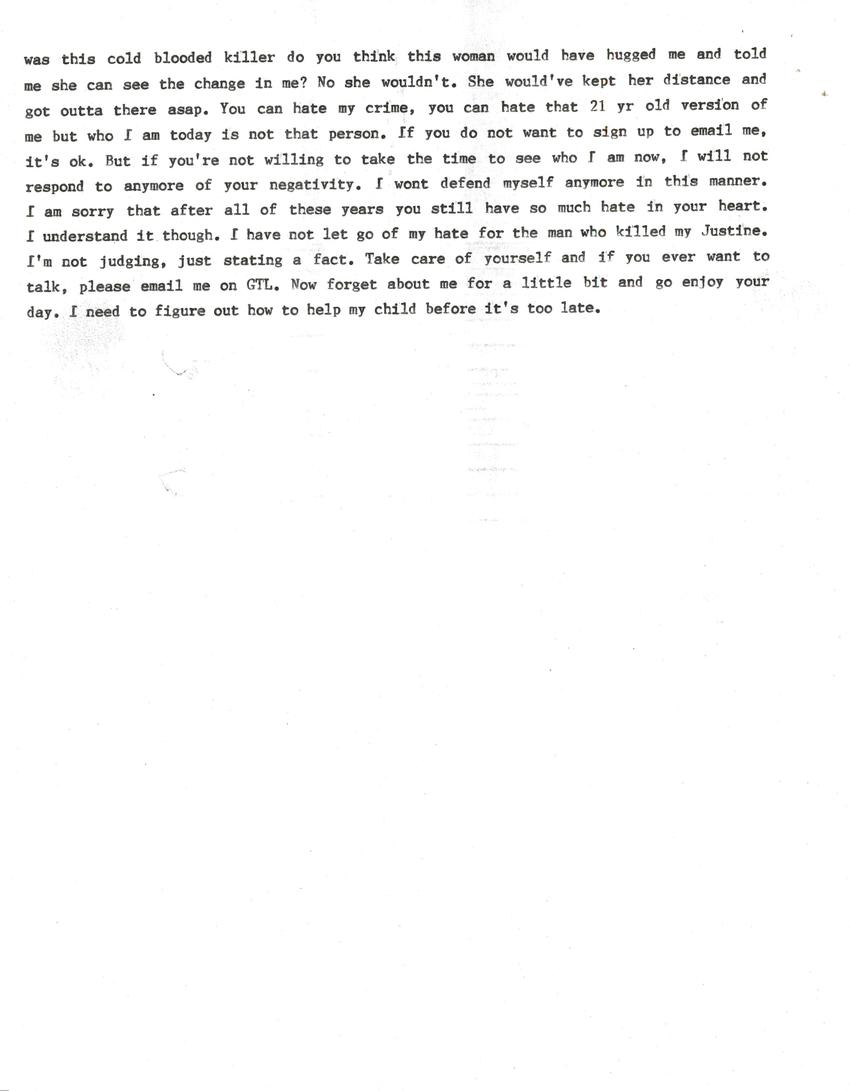 I don't know you. You knew the 21 yr old kid who took another human being's life. When Ron died, it is a forensic fact that his pants were undone, his genitals were out and he had semen in his penis. If you listened to the autopsy report, he testified that he died while sexually aroused. I woke up with a man's penis inches from my face. But you, nor anyone else, heard what happened that night because I was told not to testify. You remember testimony given by cops. That's all you've ever heard but you never cared to hear what happened. No testimony given that night told what happened. I have spent the last decade of my life working on change. But once again, it's people like you that just don't care. I don't know what, if anything, Ron would've done to me. Was he the violent aggressive type? I don't know. He wasn't the weak, frail person that you want to believe. When he punched me in the face, did you miss that? He punched me and I still remember it. You have such hate in your heart that you are not willing to see any good in anyone, are you? Didn't you contact me before? If you hate me so much, why respond at all? Do people change, Maggie? What makes me any different than the next person? In here, you either become worse or you change for the better. Is this a society that believes in the good in people or do we judge everyone and condemn them for every mistake they make? I took another human being's life, do you have any idea how hard that is to live with? You have never written to me on here and attempted to see how I've changed. You're allowed to hate, but where does that get anyone? Does it heal you to hate? Isn't there enough hate right now in the world? Why not take a little time to see how I've changed. You can still hate me, but let's look at who I have grown to become. I am not that 21 yr old anymore. My actions and behavior has proven that. I have grown to be a good man who is trying to find a way to make up for the past wrongs I've done. I don't believe I can make up for it, but I am trying. Maybe you'll help me. Maybe at Christmas time, you'll help the non-profit organization that I helped create give Christmas to a family that cannot afford a Christmas, please feel free to look at it, Compassionplace.wixsite.com/info.

I can never make up for my past. My actions caused the death of 2 people. I wasn't there for my daughter as she grew up and she is a good kid but needs a father. I was a teenage bully, Maggie, I was taught that violence is the only way to make people leave you alone or stop hurting you. I have not committed any act of violence since July 2007, when I defended myself in a prison fight. Since then, I have worked hard on who I wanted to be in life.

I talk a lot about parole eligibility for lifers. Even if I am to die in here, what about the ones who are 100% innocent of their crimes? 14 people have been released from life sentences under DA Larry Krasner who are innocent. That's 14 that spent decades in prison for crimes they did not do. Look at Walter Ogrod, his brother Greg was a friend of mine, Walter spent 23 hours a day in a tiny cell for raping and killing a 4 yr old baby girl that 25+ years later they said, "We messed up." But only because his lawyers from the Innocence Project would not stop fighting for him. I have never claimed innocence, Maggie, but I did not plan to kill Ron, I did not want it to happen. I did not initiate that night. It all began while I slept. You listened to my ex-boss Thomas Haines lie and say I told him I was gonna kill him. But what you didn't know is Tom had open charges, so did his cousin. Both received deals for testifying against me. Point is, some of their stories were lies. If you remember correctly, they said I was at their house all day helping them to pack and I had been drinking beer all day, asked how many beers I had, they said at least 6. Maggie, I hate beer. I don't drink alcohol, period, and that night at 6 pm, my finance's mother took me to the Urine Testing Center for my Sunday night biweekly urine test. If I had shown up with beer on my breath or drugs, I'd have gone to jail. They did a lot of lying in their testimony. Even Tom's lawyer, Randall Miller, knew. Randall was appointed to represent me in an appeal, but he told a judge that he was given information on my crime by Thomas Haines while he represented me on his deal for testifying against me, so he said it was a conflict of interest and couldn't represent me. He said, knowing that I know Tom said, I cannot legally expose him for perjured testimony or I would be disbarred. I know Tom lied.

Maggie, I killed Ron, maybe I do deserve to die in here, but aren't we all human beings who can evolve and change? My prison records speaks for itself, I am on the right path.

I offer you this, go online to www.gtl.net (Robert Pezzeca #DX1148 SCI Forest) and sign up to email me. Robert Pezzaca #DX1148 SCI Forest. Take some time to get to know who I have become. You can still hate me, but at least learn who I am now. There is hope for even the worst people. I learned that who we were doe not have to define who we are going to be. I also know that I am so much more than the worst thing I have ever done.

Even if I die in here, Maggie, I will not stop helping others nor will I stop focusing on change. My friend, Andrew Swainson, was recently released from prison after 31 years of claiming innocence. If parole eligibility for deserving lifers were in place, he would have been home years ago. Andrew is the 14th freed by Larry Krasner because he is innocent. I have friends who are state representatives and PA State Senators, they have spent a lot of time with me learning who I am now. They read my crime and they see someone different. State Senator Lisa Roscola came to the prison to meet me, I spent 2 hours talking with her and a bunch of other politicians if I was this cold-blooded killer, do you think this woman would have hugged me and told me she can see the change in me? No, she wouldn't. She would've kept her distance and got gotta there ASAP. You can hate my crime, you can hate that 21 yr old version of me, but who I am today is not that person. If you do not want to sign up to email me, it's ok. But if you're not willing to take the time to see who I am now, I will not respond to anymore of your negativity. I won't defend myself anymore in this manner. I am sorry that after all of these years, you still have so much hate in your heart. I understand it though. I have not let go of my hate for the man who killed my Justine. I'm not judging, just stating a fact. Take care of yourself and if you ever want to talk, please email me on GTL. Now forget about me for a little bit and go enjoy your day. I need to figure out how to help my child before it's too late.

I didn't get the context of the situation at first, but after reading this, I hear you, loud and clear.

Maggie DEFINITELY needs to read this, if they already haven't. You're tired of the bullshit, and that is very understandable.

I hope you and your child are doing the best you can right now. 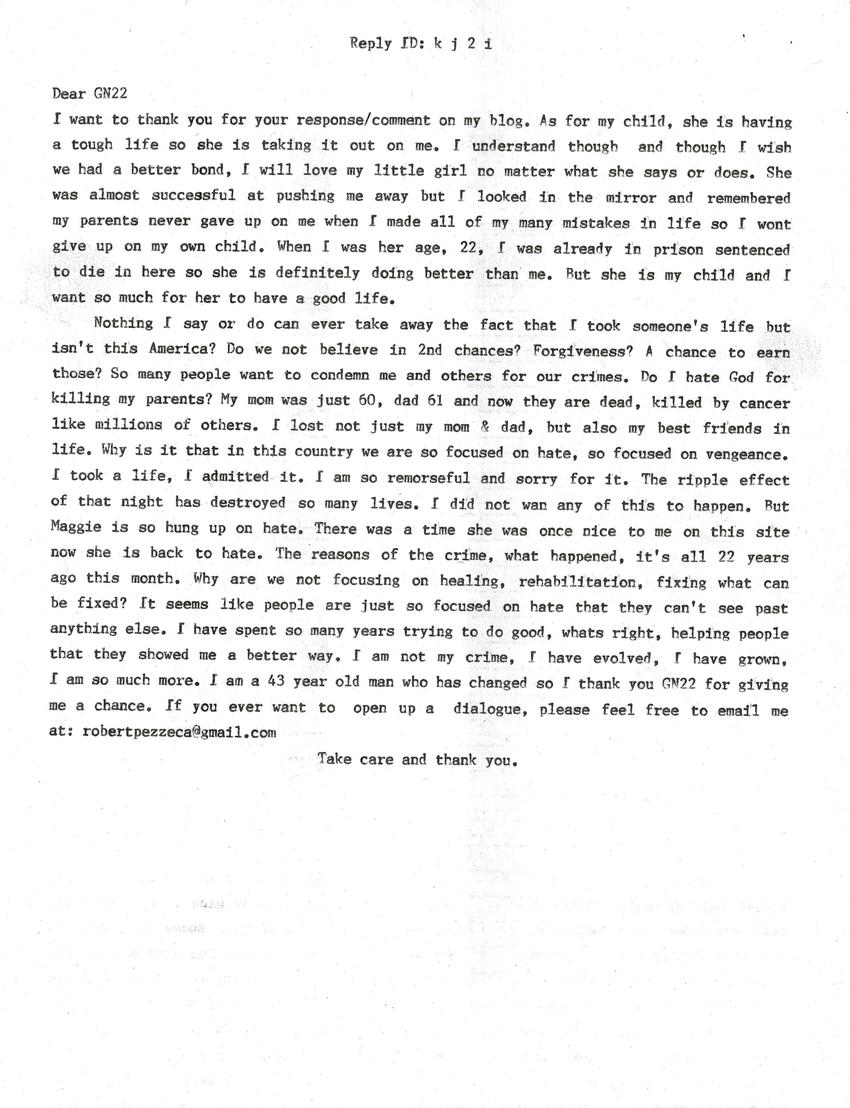