Lessons From History - The Populist's Playbook 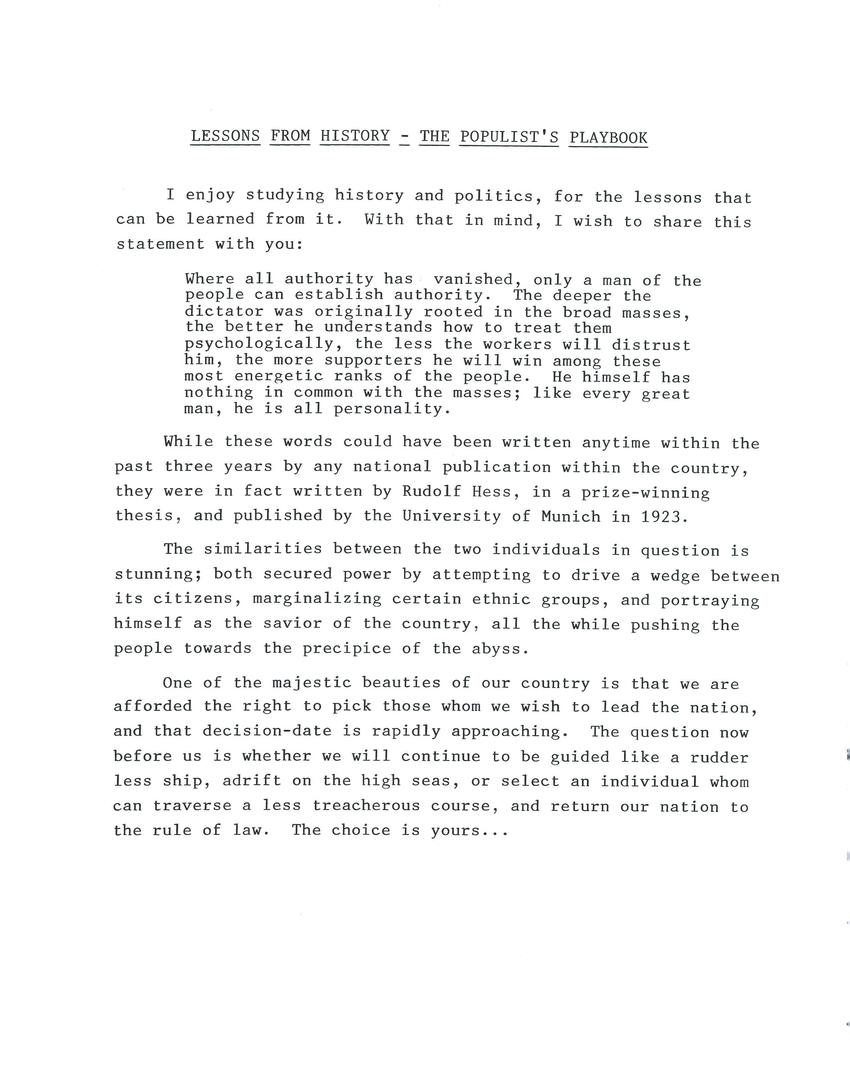 LESSONS FROM HISTORY - THE POPULIST'S PLAYBOOK

I enjoyed studying history and politics, for the lessons that can be learned from it. With that in mind, I wish to share this statement with you:

Where all authority has vanished, only a man of the people can establish authority. The deeper the dictator was originally rooted in the broad masses, the better he understands how to treat them psychologically, the less the workers will distrust him, the more supporters he will win among these most energetic ranks of the people. He himself has nothing in common with the masses; like every great man, he is all personality.

While these words could have been written anytime within the past three years by any national publication within the country, they were in fact written by Rudolf Hess, in a prize-winning thesis, and published by the University of Munich in 1923.

The similarities between the two individuals in question is stunning; both secured power by attempting to drive a wedge between its citizens, marginalizing certain ethnic groups, and portraying himself as the savior of the country, all the while pushing the people towards the precipice of the abyss.

One of the majestic beauties of our country is that we are afforded the right to pick those whom we wish to lead the nation, and that decision-date is rapidly approaching. The question now before us is whether we will continue to be guided like a rudder less ship, adrift on the high seas, or select an individual whom can traverse a less treacherous course, and return our nation to the rule of law. The choice is yours...

Talking of a choice... your people didn't make a good choice... but that is now the past.
This president is the man you need in these times.
I guess it's more peaceful nowadays.
I hope you read this letter?
Today, a letter left for America!

Leslie called tonight.
She asked how my back was? (the trapezius muscle) Well, it's moved upwards to the neck and the upper arms.
An RX and an echo showed I've an infection at the tendon called: Subscapularis and the Supraspinatus). On the first one I've an infection.I take some infection medication.I've another 18 sessions at the kinesist.3 tmes a week. Kinepoint luckily is not far away.

Everyday now I play piano for half an hour, classcical music and jazz.-smile

No news from Jessica yet. Did you get some news from her?

It's about time we pick up to write here, as we don't see each other anymore on video. :((

I read the comment having difficulties with writing words etc; it is happening here with people also.
It will restore within time, George.