An Open Letter to Gov. Rauner 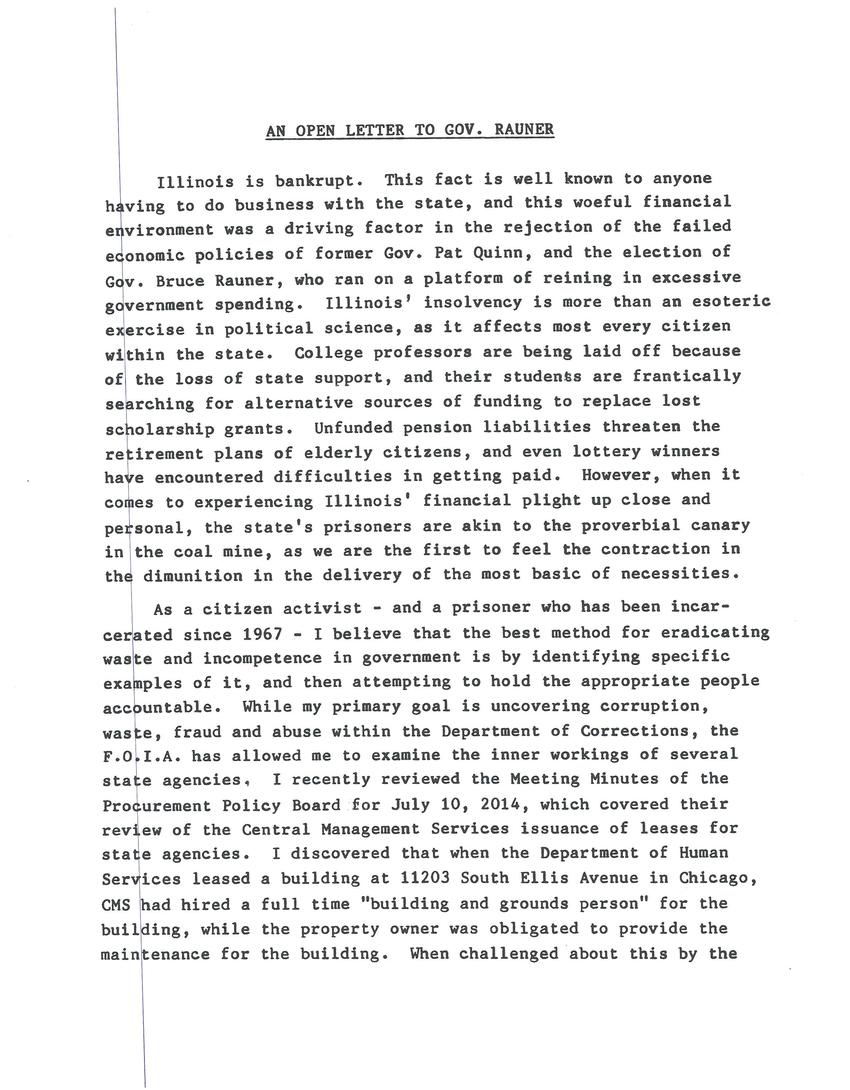 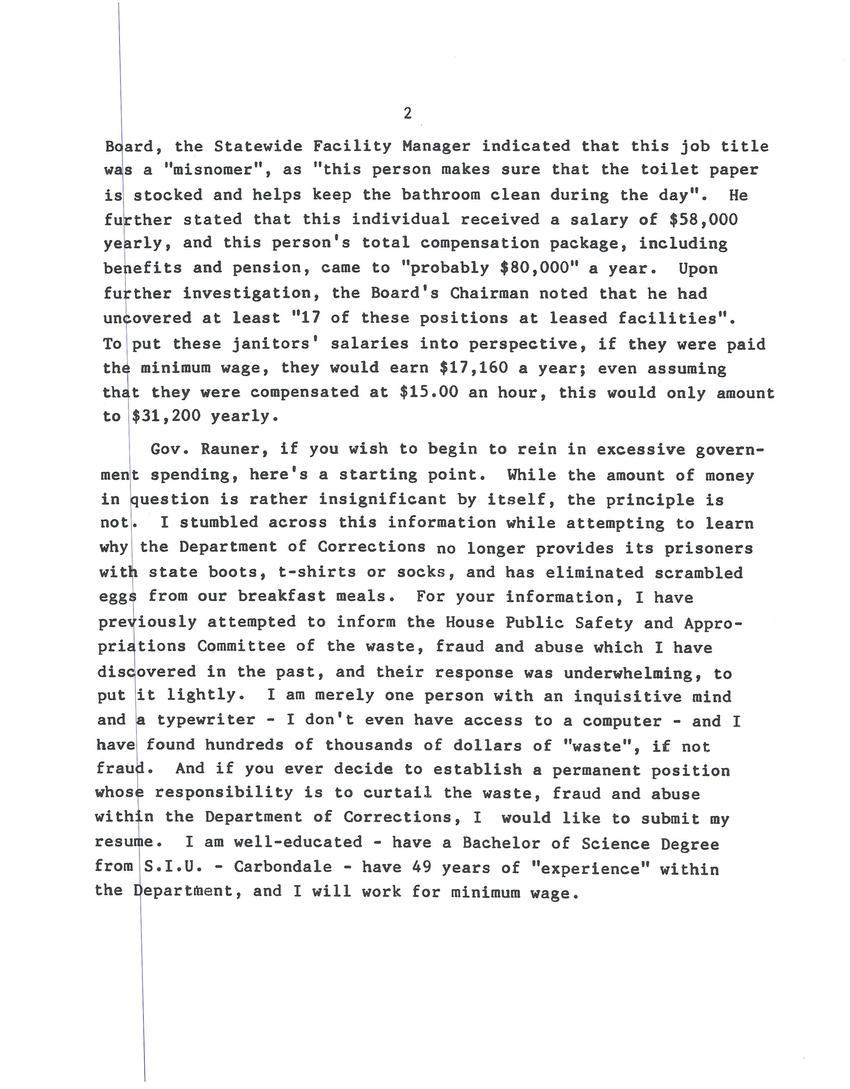 AN OPEN LETTER TO GOV. RAUNER

Illinois is bankrupt. This fact is well known to anyone having to do business with the state, and this woeful financial environment was a driving factor in the rejection of the failed economic policies of former Gov. Pat Quinn, and the election of Gov. Bruce Rauner, who ran on a platform of reining in excessive government spending. Illinois' insolvency is more than an esoteric exercise in political science, as it affects most every citizen within the state. College professors are being laid off because of the loss of state support, and their students are frantically searching for alternative sources of funding to replace lost scholarship grants. Unfunded pension liabilities threaten the retirement plans of elderly citizens, and even lottery winners have encountered difficulties in getting paid. However, when it comes to experiencing Illinois' financial plight up close and personal, the state's prisoners are akin to the proverbial canary in the coal mine, as we are the first to feel the contraction in the diminution in the delivery of the most basic of necessities.

As a citizen activist - and a prisoner who has been incarcerated since 1967 - I believe that the best method for eradicating waste and incompetence in government is by identifying specific examples of it, and then attempting to hold the appropriate people accountable. While my primary goal is uncovering corruption, waste, fraud and abuse within the Department of Corrections, the F.O.I.A. has allowed me to examine the inner workings of several state agencies. I recently reviewed the Meeting Minutes of the Procurement Policy Board for July 10, 2014, which covered their review of the Central Management Services issuance of leases for state agencies. I discovered that when the Department of Human Services leased a building at 11203 South Ellis Avenue in Chicago, CMS had hired a full time "building and grounds person" for the building, while the property owner was obligated to provide the maintenance for the building. When challenged about this by the Board, the Statewide Facility Manager indicated that this job title was a "misnomer", as "this person makes sure that the toilet paper is stocked and helps keep the bathroom clean during the day". He further stated that this individual received a salary of $58,000 yearly, and this person's total compensation package, including benefits and pension, came to "probably $80,000" a year. Upon further investigation, the Board's Chairman noted that he had uncovered at least "17 of these positions at leased facilities". To put these janitors' salaries into perspective, if they were paid the minimum wage, they would earn $17,160 a year; even assuming that they were compensated at $15.00 an hour, this would only amount to $31,200 yearly.

Gov. Rauner, if you wish to begin to rein in excessive government spending, here's a starting point. While the amount of money in question is rather insignificant by itself, the principle is not. I stumbled across this information whilst attempting to learn why the Department of Corrections no longer provides its prisoners with state boots, t-shirts or socks, and has eliminated scrambled eggs from our breakfast meals. For your information, I have previously attempted to inform the House Public Safety and Appropriations Committee of the waste, fraud and abuse which I have discovered in the past, and their response was underwhelming, to put it lightly. I am merely one person with an inquisitive mind and a typewriter - I don't even have access to a computer - and I have found hundreds of thousands of dollars of "waste", if not fraud. And if you ever decide to establish a permanent position whose responsibility is to curtail the waste, fraud and abuse within the Department of Corrections, I would like to submit my resume. I am well-educated - have a Bachelor of Science Degree from S.I.U. - Carbondale - have 49 years of "experience" within the Department, and I will work for minimum wage.

I just got to read your letter... while I told your dad I sent myself a letter to governor Rauner. He should have gotten my letter by now.:o
I yesterday got a late phone call from William!I was in Brussels for three days, and he couldn't reach me by cellphone either.But he did eventually. He told me the bad news you are in segregation...I do know it is because of stamps on envelopes.He called your dad concerning it. He was very worried too. I will call him tomorrow, May 11th in that aspect, ok?
I was doing babysitting on the kids in Nossegem today, 10th.Lars grew a lot!I took pictures from both of them. Lynn and me did walk quite a bit outside. ;)She amazed me today! She filled in a letter W for 'Wortel', a carrot.I guess she'll read quite fast!
George,I understood you are 15 days or more? in segregation! I do 'hope' you are out by the time we visit you!...
You should have gotten my last letter, with small photos by now?
Pay attention by what you do and undertake, darling...
It is painful for you and me.:(
I am thinking of you and I wish you so much better.
All my sweet love, take it within your heart.:)
xxx from me, Rita
Ok George, now I know better what happened exactly. Your dad read the letter out loud for me; a copy William had sent to him.Apparently you were in seg from the 29th of April! I thought it was later.That makes that you leave tomorrow.We are the 13th today.I am happy for you, darling...:)
Your dad told me the weather was still cold.Here it is like summer!But it will cool off later it is said.I had a ride on the bike with a group: called VLAS; Flemish active seniors. We went to the other side of the river Schelde.The left side.We rode more then 44 kilometers!!We stopped twice, but my legs did a hard job!A tire was repaired underway by two men of the group.I slept a while coming home! We met at 10.15am and I was home at 7.30pm! after some shores I still had to do next.
Then I also called mom. I had three intense days behind me!
I went to listen to a jazz performance on my own: students of the conservatory showing to the public what they had made. A singer(woman), a guitarist(man), a pianist (man), a bassist (woman),a percusionist (man), a drummer (man),the drummer who played for a while violin,and the bassist played another instrument too. So wonderful!!
The next day I went with Kathleen,48yrs- a very nice new friend/she lives nearby- to a performance from a woman, Jessie, who worked for TV who had a burnout. She went to live three yrs in Marokko. There she met her Frenchman; the love of her life!
Jessie wrote also a book about her burnout.Together with Hilde-who played many instruments! and also sang- they had an intense performance about Jessie's life between Marokko and Oostende, the coast where she now lives with her Frenchman.Hilde had her CD for sale. I bought that one Piscis on yet another performance in a library; that's the place I met Kathleen. ;)
And today I had thus my bike day!!!:)
All after my trip of three days to Brussels!Where I walked a lot!!!
This weekend- I know you are free again- I will calm down and enjoy the splendid weather!:)))

So much love from me, sweetie!xxx and a very warm embrace!from Rita
My brother Paul and Claudine arrive from Australia the 27th of May. The 28th it's his 70th B- Day.
Christine and Joost visit on the 26th of May la douce France... the south and close to the sea.
She told me they will visit Leslie in the month of August this year!They will travel business class. To help to put their garden on order and babysit while Leslie works.
Karel and Mariana will visit them in their new house in January '17. In July they visit Elke and the kids.

I heard from Veerle things that happened in the past... She comes to visit me on May, the 25th!

Hey, how lovely we could talk in the future, George!! :))
The question is: Where in this small place could I possibly buy a phone?? Maybe I can ask Leslie to buy this phone and send it to me in the future? We'll see thus.

I was up at 5:15am to work at my subject:'Imagination brings you everywhere'.I made it yesterday late and sent it in this morning!.It was a great title!

I spoke about seg with mr.Korte. He says there is more to it then the newspaper alone.And you could send me the copy of the whole report.Can you do so?
Your dad's phone was disconnected... :o
Hope he's all right? I contacted John about it.Not an answer yet. Jessica should contact you.Hope she does this time!

Here I am again. Home from a course in art- painting. It was such a great course! I learned a lot of new techniques. We were only 3 people and each of the women could speak of her current emotions. And that we had!:o
I will send you some drawings, if you like?
We're as sisters now and stay in touch.
I know you're in Menard; William knew and also Gera when placing you on her website. It was suddenly removed and then she saw you were transferred!
The place where we met! ;)

Could you 'please' give me an answer on this, George? So I know you've read it.