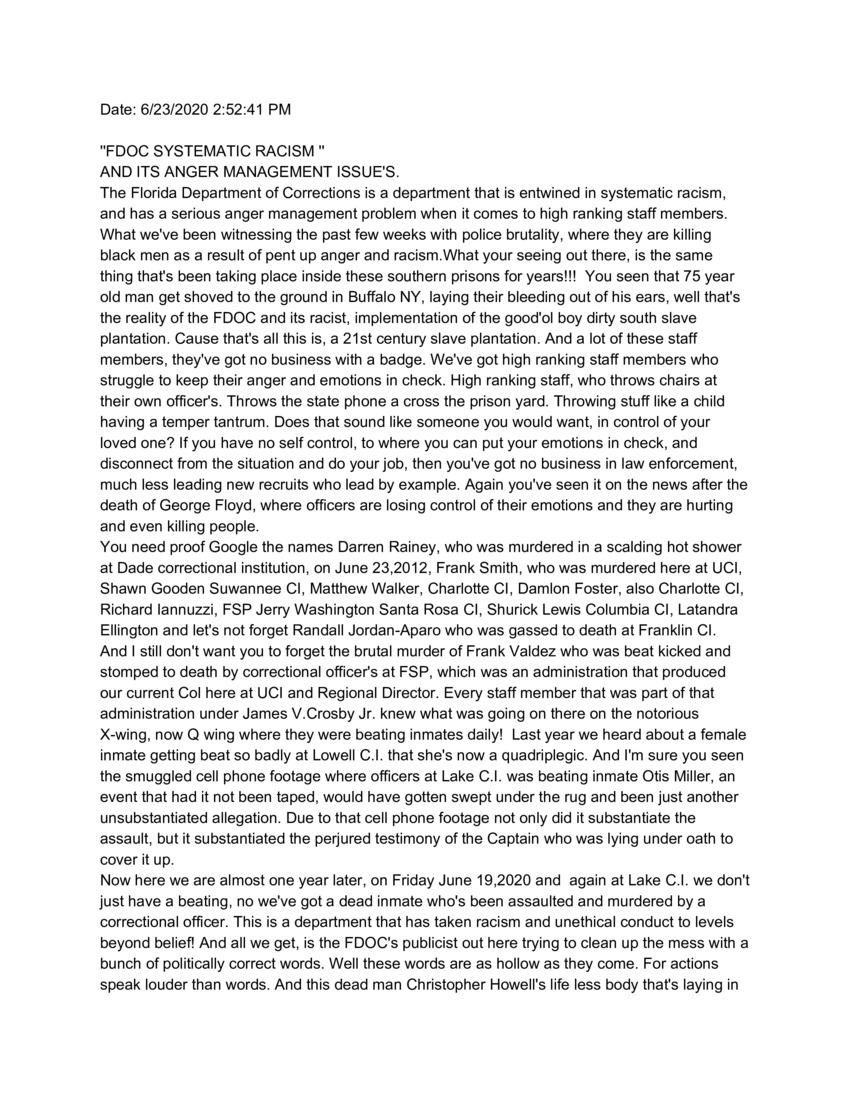 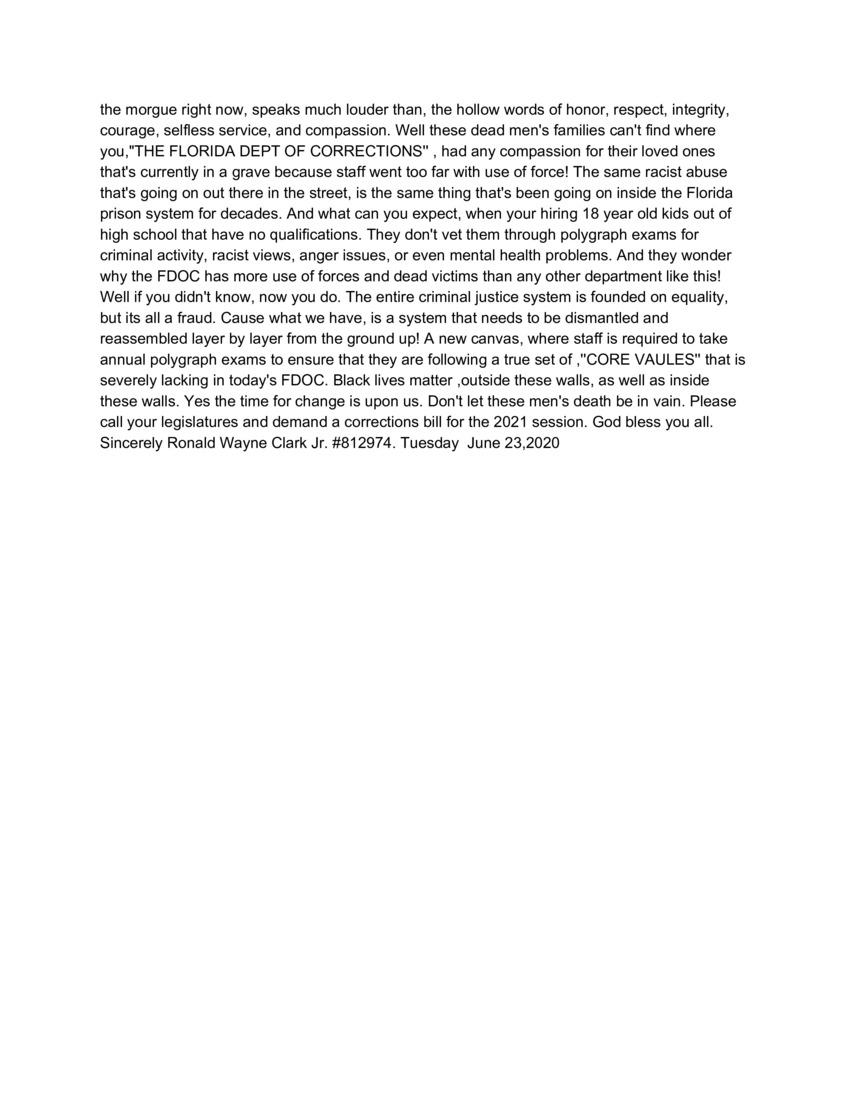 Date: 6/23/2020 2:52:41 PM
"FDOC SYSTEMATIC RACISM"
AND ITS ANGER MANAGEMENT ISSUE'S.
The Florida Department of Corrections is a department that is entwined in systematic racism, and has a serious anger management problem when it comes to high ranking staff members. What we've been witnessing the past few weeks with police brutality, where they are killing black men as a result of pent up anger and racism. What you're seeing out there, is the same thing that's been taking place inside these southern prisons for years!!! You seen that 75-year-old man get shoved to the ground in Buffalo NY, laying there bleeding out of his ears, well that's the reality of the FDOC and its racist, implementation of the good'ol boy dirty south slave plantation. Cause that's all this is, a 21st-century slave plantation. And a lot of these staff members, they've got no business with a badge. We've got high ranking staff members who struggle to keep their anger and emotions in check. High ranking staff, who throws chairs at their own officers. Throws the state phone across the prison yard. Throwing stuff like a child having a temper tantrum. Does that sound like someone you would want, in control of your loved one? If you have no self control, to where you can put your emotions in check, and disconnect from the situation and do your job, then you've got no business in law enforcement, much less leading new recruits who lead by example. Again you've seen it on the news after the death of George Floyd, where officers are losing control of their emotions and they are hurting and even killing people.
You need proof Google the names Darren Rainey, who was murdered in a scalding hot shower at Dade correctional institution, on June 23, 2012, Frank Smith, who was murdered here at UCI, Shawn Gooden Duwannee CI, Matthew Walker, Charlotte CI, Damlon Foster, also Charlotte CI, Richard Iannuzzi, FSP Jerry Washington Santa Rosa CI, Shurick Lewist Columbia CI, Latandra Ellington and let's not forget Randall Jordan-Aparo who was gassed to death at Franklin CI. And I still don't want you to forget the brutal murder of Frank Valdez who was beat kicked and stomped to death by correctional officers at FSP, which was an administration that produced our current Col here at UCI and Regional Director. Every staff member that was part of that administration under James V. Crosby Jr. knew what was going on there on the notorious X-Wing, now Q wing where they were beating inmates daily! Last year we heard about a female inmate getting beat so badly at Lowell C.I. that she's now a quadriplegic. And I'm sure you seen the smuggled cell phone footage where officers at Lake C.I. were beating inmate Otis Miller, an event that had it not been taped, would have gotten swept under the rug and been just another unsubstantiated allegation. Due to the cell phone footage not only did it substantiate the assault, but it substantiated the perjured of the Captain who was lying under oath to cover it up.
Now here we are almost one year later, on Friday, June 19, 2020, and again at Lake C.I. we don't have just one beating, no we've got a dead inmate who's been assaulted and murdered by a correctional officer. This is a department that has taken racism and unethical conduct to levels beyond belief! And all we get, is the FDOC's publicist out here trying to clean up the mess with a bunch of politically correct words. Well these words are as hollow as they come. For actions speak louder than words. And this dead man Christopher Howell's lifeless body that's laying in the morgue right now, speaks much louder than, the hollow words of honor, respect, integrity, courage selfless service, and compassion. Well these dead men's families can't find where you, "THE FLORIDA DEPT OF CORRECTIONS", had any compassion for their loved ones that's currently in a grave because staff went too far with use of force! The same racist abuse that's going on out there in the street, is the same thing that's been going on inside the Florida prison system for decades. And what can you expect, when you're hiring 18-year-old kids out of high school that have no qualifications. They don't vet them through polygraph exams for criminal activity, racist views, anger issues, or even mental health problems. And they wonder why the FDOC has more use of force and dead victims than any other department like this! Well if you didn't know, now you do. The entire criminal justice system is founded on equality, but its all a fraud. Cause what we have, is a system that needs to be dismantled and reassembled layer by layer from the ground up! A new canvas, where staff is required to take annual polygraph exams to ensure that they are following a true set of, "CORE VALUES" that is severely lacking in today's FDOC. Black lives matter, outside these walls, as well as inside these walls. Yes the time for change is upon us. Don't let these men's death be in vain. Please call your legislatures and demand a corrections bill for the 2021 session. God bless you all.
Sincerely Ronald Wayne Clark Jr. #812974. Tuesday June 23.2020