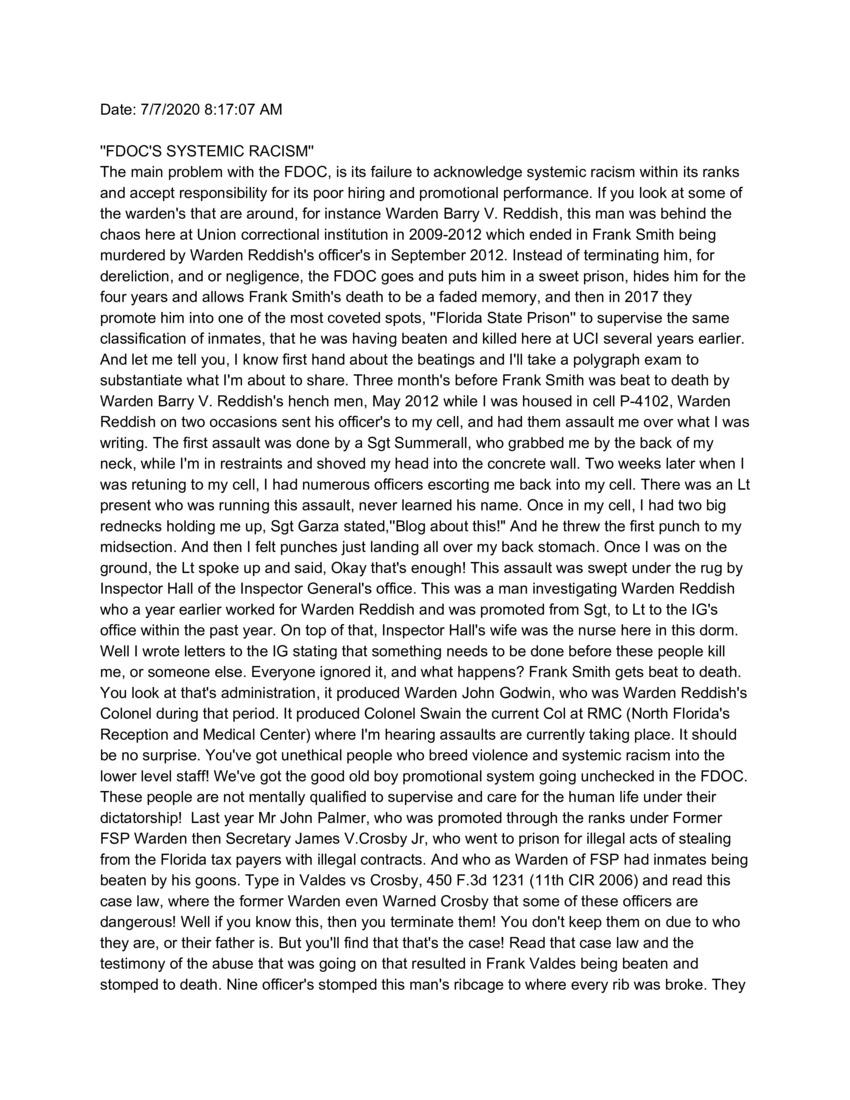 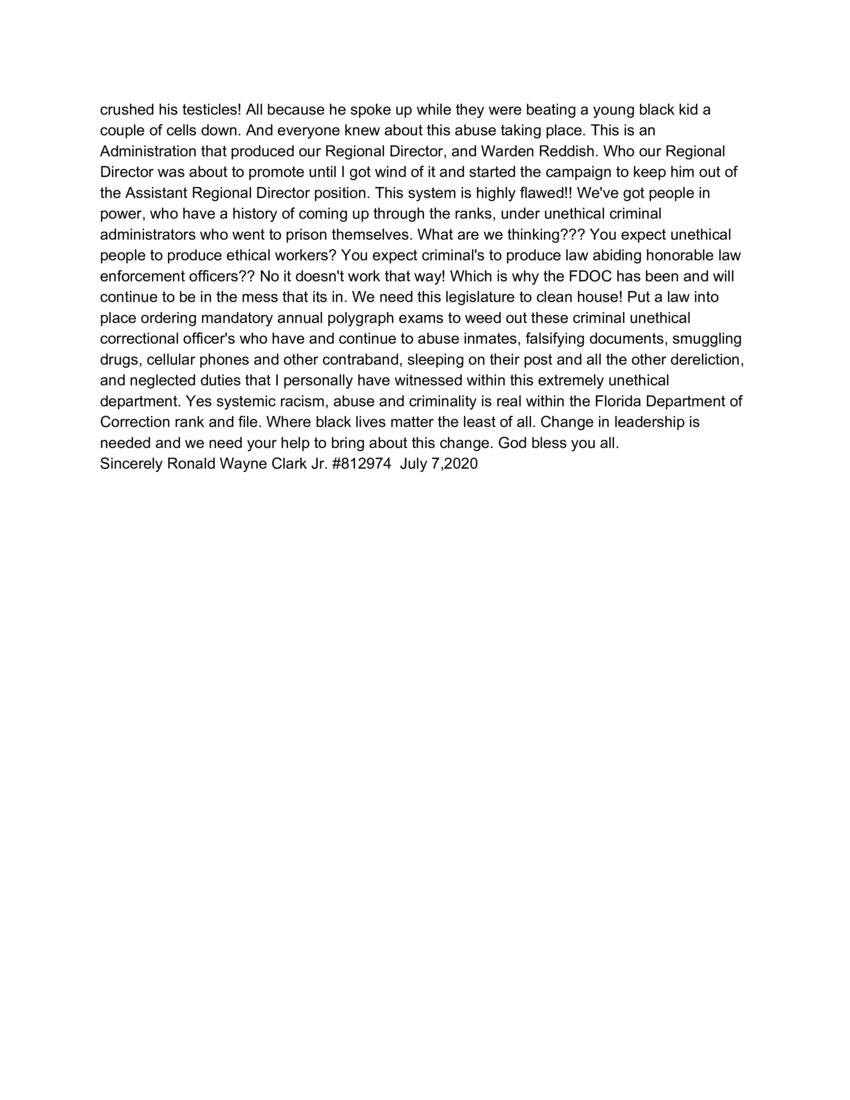 The main problem with the FDOC, is its failure to acknowledge systemic racism within its ranks and accept responsibility for its poor hiring and promotional performance. If you look at some of the wardens that are around, for instance, Warden Barry V. Reddish, this man was behind the chaos here at Union Correctional Institution in 2009-2017, which ended in Frank Smith being murdered by Warden Reddish's officers in September 2012. Instead of terminating him, for dereliction, and/or negligence, the FDOC goes and puts him in a sweet prison, hides him for the four years and allows Frank Smith's death to be a faded memory, and then in 2017, they promote him into one of the most coveted spots, "Florida State Prison" to supervise the same classification of inmates, that he was having beaten and killed here at UCI several years earlier. And let me tell you, I know first hand about the beatings and I'll take a polygraph exam to substantiate what I'm about to share. Three months before Frank Smith was beaten to death by Warden Barry V. Reddish's henchmen, May 2012, while I was housed in cell P-4102, Warden Reddish on two occasions sent his officers to my cell, and had them assault me over what I was writing. The first assault was done by a Sgt. Summerall, who grabbed me by the back of my neck, while I'm in restraints and shoved my head into the concrete wall. Two weeks later, when I was returning to my cell, I had numerous officers escorting me back into my cell. There was a Lt. present who was running this assault, never learned his name. Once in my cell, I had two big rednecks holding me up, Sgt. Garza stated, "Blog about this!" And he threw the first punch to my midsection. And then I felt punches just landing all over my back stomach. Once I was on the ground, the Lt. spoke up and said, "Okay, that's enough!" This assault was swept under the rug by Inspector Hall of the Inspector General's office. This was a man investigating Warden Reddish, who a year earlier, worked for Warden Reddish and was promoted from Sgt. to Lt. to the IG's office within the past year. On top of that, Inspector Hall's wife was the nurse here in this dorm. Well, I wrote letters to the IG stating that something needs to be done before these people kill me or someone else. Everyone ignored it and what happens? Frank Smith gets beat to death. You look at that administration, it produced Warden John Godwin, who was Warden Reddish's Colonel during that period. It produced Colonel Swain, the current Col. at RMC (North Florida's Reception and Medical Center) where I'm hearing assaults are currently taking place. It should be no surprise. You've got unethical people who breed violence and systemic racism into the lower level staff! We've got the good old boy promotional system going unchecked in the FDOC. These people are not mentally qualified to supervise and care for the human life under their dictatorship! Last year, Mr. John Palmer, who was promoted through the ranks under Former FSP Warden, then Secretary James V. Crosby Jr, who went to prison for illegal acts of stealing from the Florida taxpayers with illegal contracts. And who as Warden of FSP had inmates being beaten by his goons? Type in Valdes vs. Crosby, 450 F. 3d 1231 (11th CIR 2006) and read this case law, where the former Warden even warned Crosby that some of these officers are dangerous! Well, if you know this, then you terminate them! You don't keep them on due to who they are or their father is. But you'll find that that's the case! Read that case law and the testimony of the abuse that was going on that resulted in Frank Valdes being beaten and stomped to death. Nine officers stomped this man's ribcage to where every rib was broke. They crushed his testicles! All because he spoke up while they were beating a young black kid a couple of cells down. And everyone knew about this abuse taking place. This is an Administration that produced our Regional Director and Warden Reddish. Who our Regional Director was about to promote until I got wind of it and started the campaign to keep him out of the Assistant Regional Director position. This system is highly flawed! We've got people in power, who have a history of coming up through the ranks, under unethical criminal administrators who went to prison themselves. What are we thinking??? You expect unethical people to produce ethical workers?? No, it doesn't work that way! Which is why the FDOC has been and will continue to be in the mess that it's in. We need this legislature to clean the house! Put a law into place ordering mandatory annual polygraph exams to weed out these criminal unethical correctional officers who have and continue to abuse inmates, falsifying documents, smuggling drugs, cellular phones, and other contraband, sleeping on their post and all the other dereliction and neglected duties that I personally have witnessed within this extremely unethical department. Yes, systemic racism, abuse, and criminality is real within the Florida Department of Correction rank and file. Where Black Lives Matter the least of all. Change in leadership is needed and we need your help to bring about this change. God bless you all.