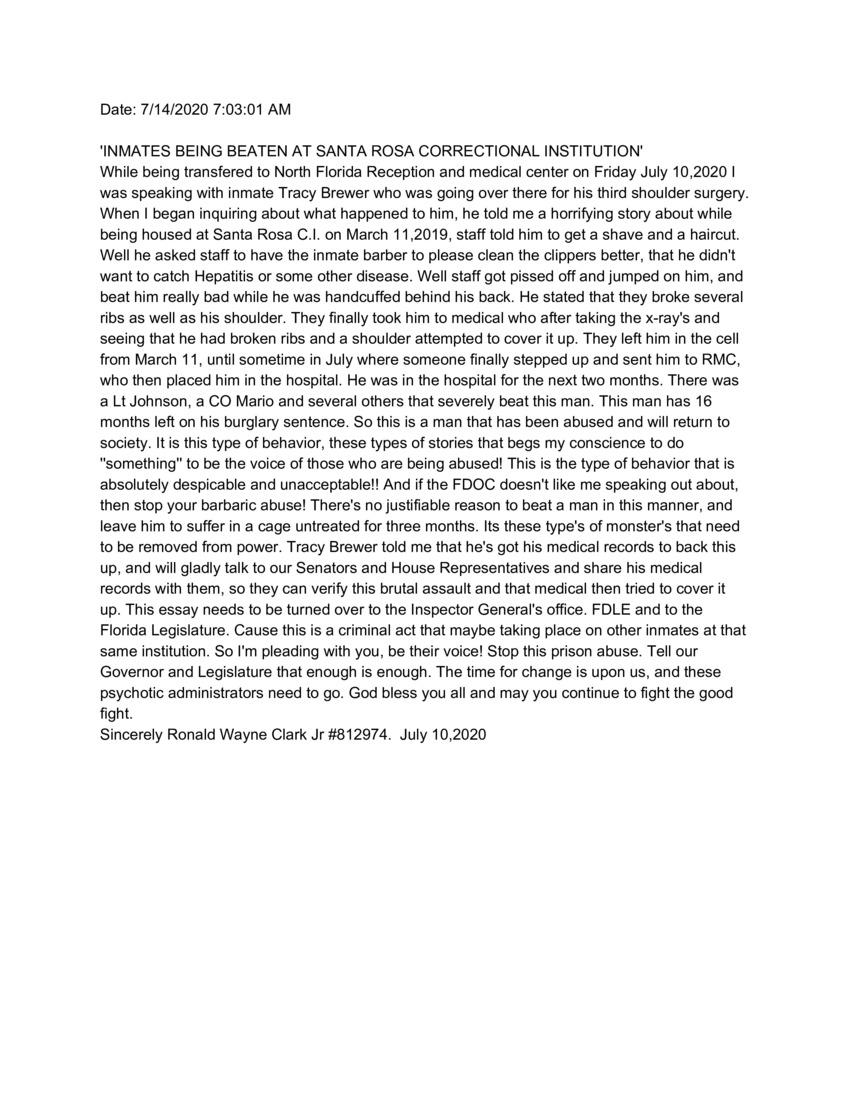 'INMATES BEIN BEATEN AT SANTA ROSA CORRECTIONAL INSTITUTION'
While being transferred to North Florida Reception and medical center on Friday, July 10, 2020. I was speaking with inmate Tracy Brewer who was going over there for his third shoulder surgery. When I began inquiring about what happened to him, he told me a horrifying story about while being housed at Santa Rosa C.I. on March 11, 2019, staff told him to get a shave and a haircut. Well, he asked the staff to have the inmate barber to please clean the clippers better, that he didn't want to catch Hepatitis or some other disease. Well, the staff got pissed off and jumped on him, and beat him really bad while he was handcuffed behind his back. He stated that they broke several ribs as well as his shoulder. They finally took him to medical who after taking the x-rays and seeing that he had broken ribs and a broken shoulder attempted to cover it up. they left him in the cell from March 11, until someone in July where someone finally stepped up and sent him to RMC, who then placed him in the hospital. He was in the hospital for the next two months. There was a Lt Johnson, a CO Mario, and several others that severely beat this man. This man has 16 months left on his burglary sentence. So this is a man that has been abused and will return to society. It is this type of behavior, these types of stories that begs my conscience to do "something" to be the voice of those who are being abused! This type of behavior is absolutely despicable and unacceptable!! And if the FDOC doesn't like me speaking out about, then stop your barbaric abuse! There is no justifiable reason to beat a man in this manner and leave him to suffer in a cage untreated for three months. It's these types of monsters that need to be removed from power Tracy Brewer told me that he's got his medical records to back this up, and will gladly talk to our Senators and House of Representatives and share his medical records with them, so they can verify this assault and that medical then tried to cover it up. This essay needs to be turned over to the Inspector General's office. FDLE and to the Florida Legislature. Because this is a criminal act that may be taking place on the other inmates at that same institution So I,m pleading with you be their voice! Stop this abuse. Tell our Governors and Legislature that enough is enough. The time for change is upon us, and these psychotic administers need to go. God bless you all and may you continue to fight the good fight.
Sincerely Ronald Wayne Clark Jr #812974. July 10, 2020