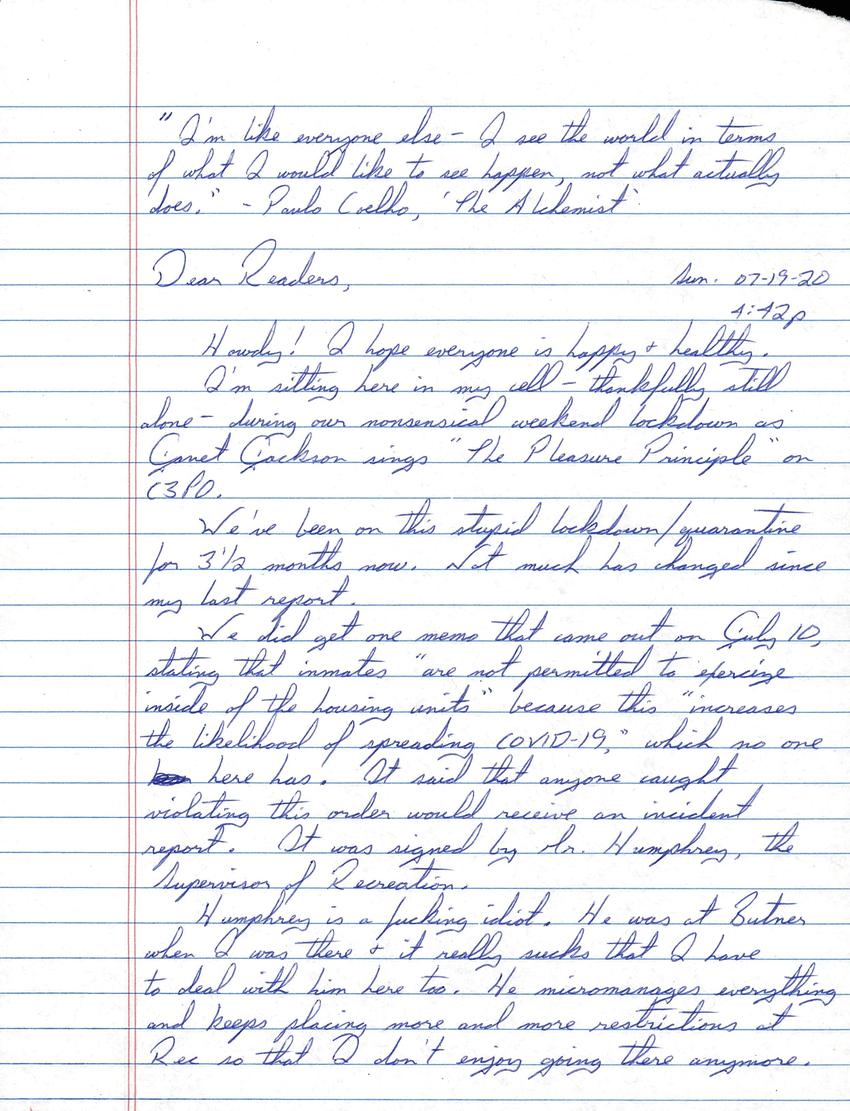 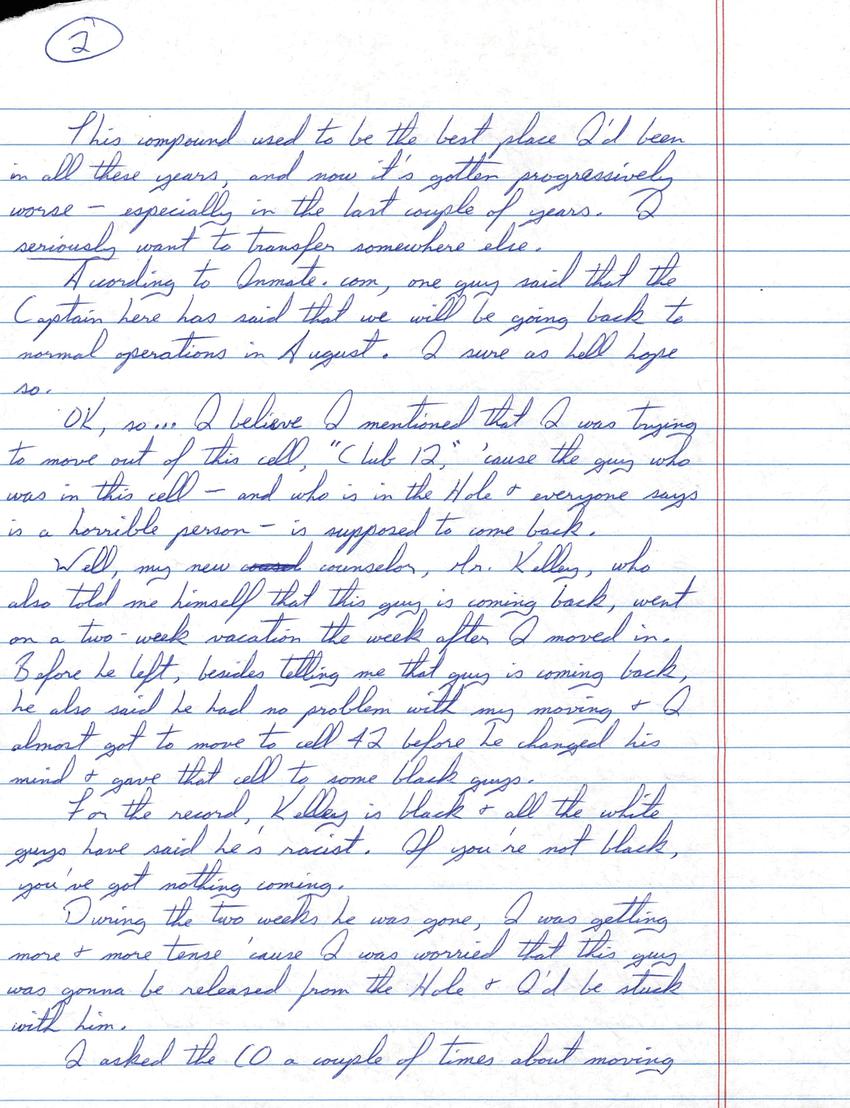 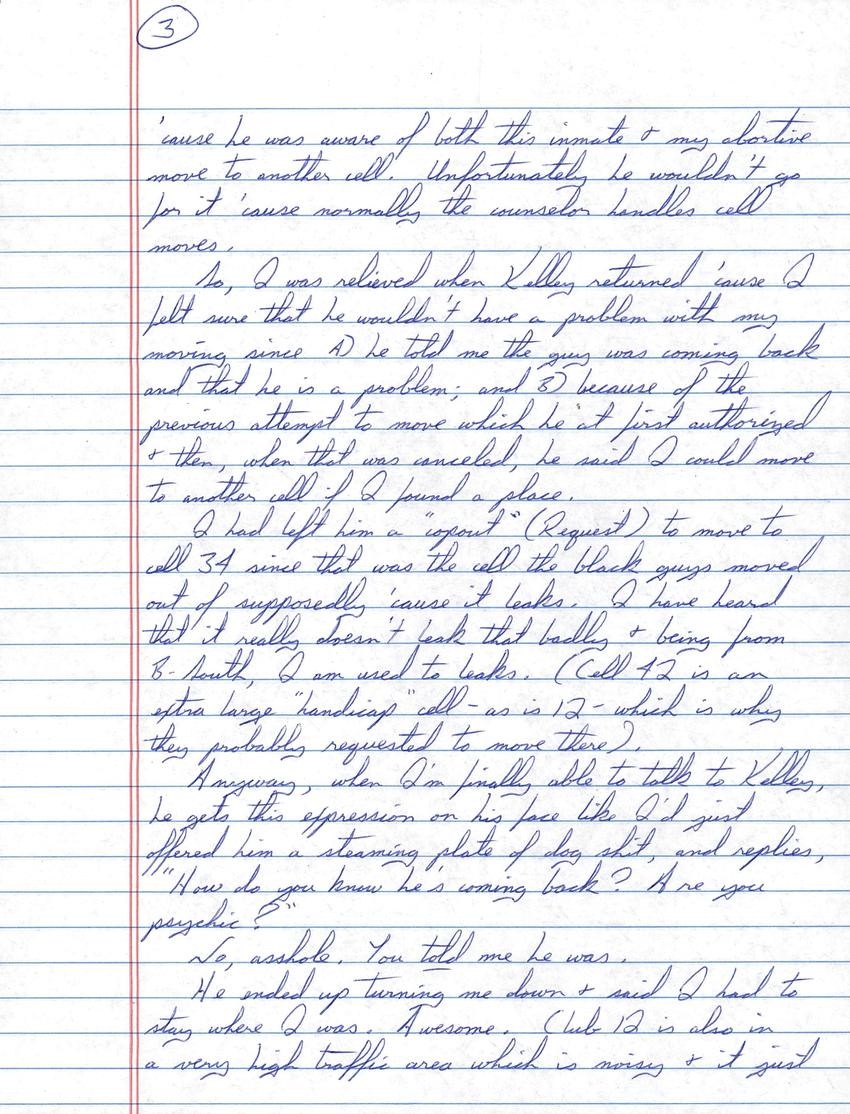 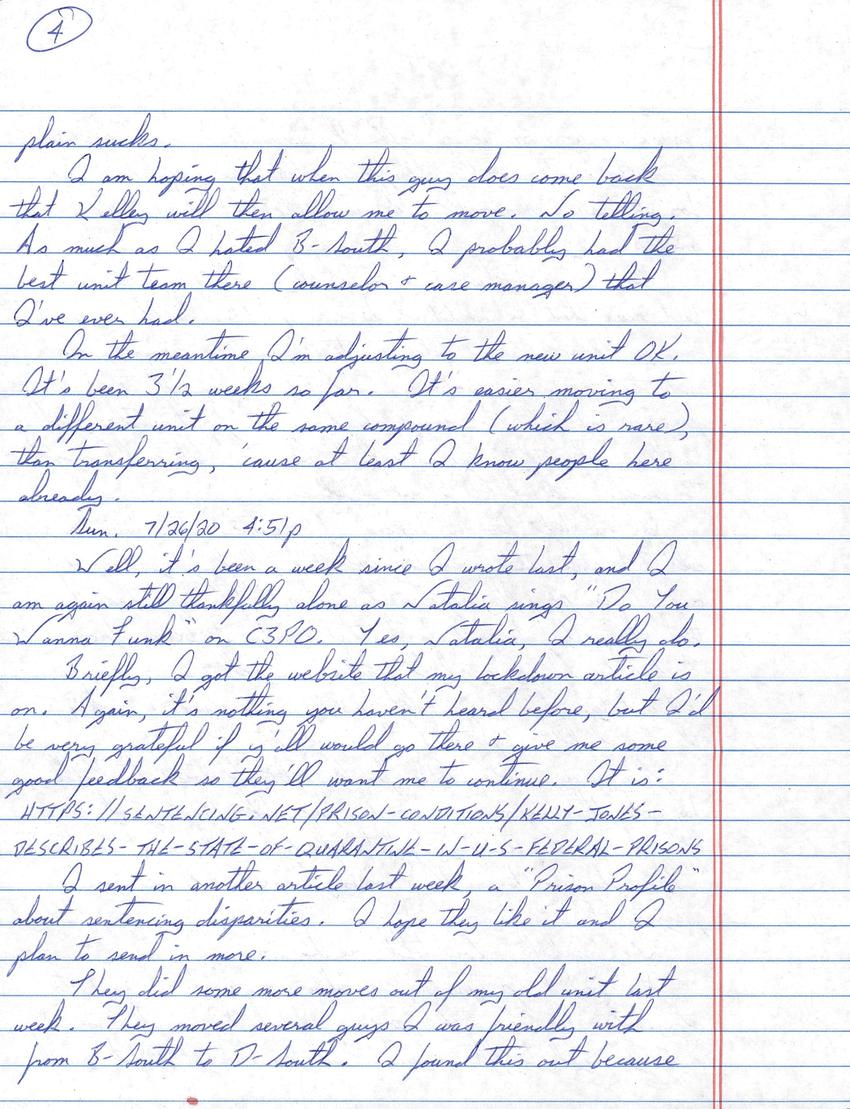 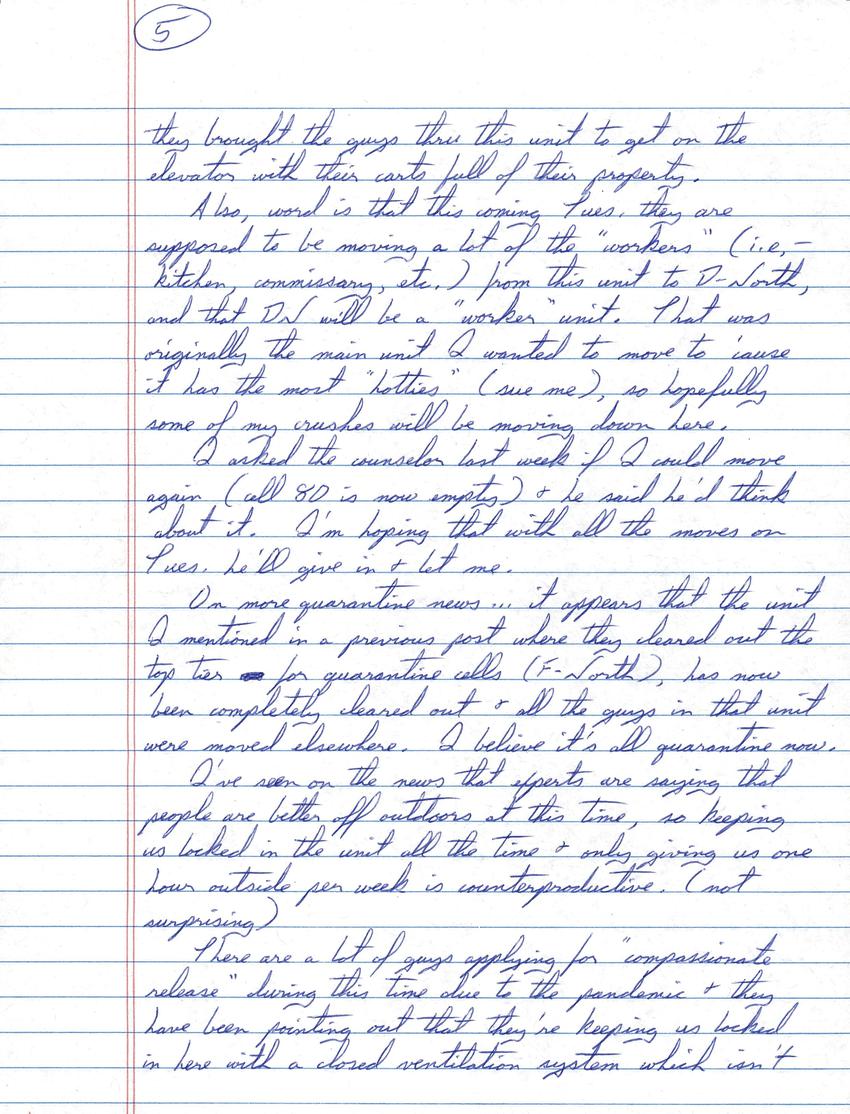 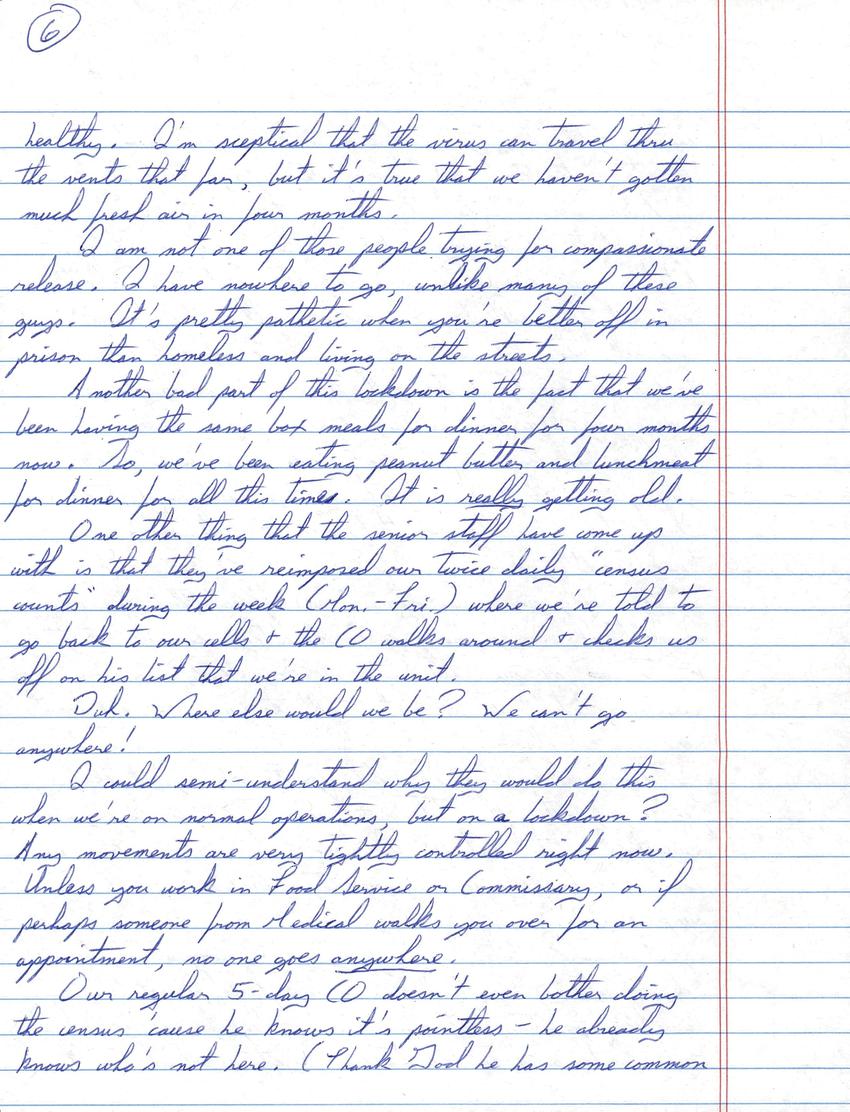 "I'm like everyone else - I see the world in terms of what I would like to see happen, not what actually does." - Paulo Coelho, "The Alchemist"

Howdy! I hope everyone is happy & healthy.

I'm sitting here in my cell - thankfully still alone - during our nonsensical weekend lockdown as Janet Jackson sings "The Pleasure Principle" on C3PO.
We've been on this stupid lockdown/quarantine for 3 1/2 months now. Not much has changed since my last report.

We did get one memo that came out on July 10, stating that inmates "are not permitted to exercise inside of the housing units" because this "increases the likelihood of spreading COVID-19," which no one here has. It said that anyone caught violating this order would receive an incident report. It was signed by Mr. Humphrey, the Supervisor of Recreation.

Humphrey is a fucking idiot. He was at Butner when I was there & it really sucks that I have to deal with him here too. He micromanages everything and keeps placing more and more restrictions at Rec so that I don't enjoy going there anymore.

This compound used to be the best place I'd been in all these years, and now it's gotten progressively worse - especially in the last couple of years. I seriously want to transfer somewhere else.

According to Inmate.com, one guy said that the Captain here has said that we will be going back to normal operations in August. I sure as hell hope so.

OK, so... I believe I mentioned that I was trying to move out of this cell, "Club 12," 'cause the guy who was in this cell - and who is in the Hole & everyone says is a horrible person - is supposed to come back.

Well, my new counselor, Mr. Kelley, who also told me himself that this guy is coming back, went on a two-week vacation the week after I moved in. Before he left, besides telling me that guy is coming back, he also said he had no problem with my moving & I almost got to move to cell 42 before he changed his mind & gave that cell to some black guys.

For the record, Kelley is black & all the white guys have said he's racist. If you're not black, you've got nothing coming.

During the two weeks he was gone, I was getting more and more tense 'cause I was worried that this guy was gonna be released from the Hole & I'd be stuck with him.

I asked the CO a couple of times about moving 'cause he was aware of both this inmate & my abortive move to another cell. Unfortunately he wouldn't go for it 'cause normally the counselor handles cell moves.

So, I was relieved when Kelley returned 'cause I felt sure that he wouldn't have a problem with my moving since A) he told me the guy was coming back and that he is a problem; and B) because of the previous attempt to move which he at first authorized & then, when that was canceled, he said I could move to another cell if I found a place.

I had left him a "copout" (Request) to move to cell 34 since that was the cell the black guys moved out of supposedly 'cause it leaks. I have heard that it really doesn't leak that badly & being from B-South, I am used to leaks. (Cell 42 is an extra large "handicap" cell - as is 12 - which I why they probably requested to move there).

Anyway, when I'm finally able to talk to Kelley, he gets this expression on his face like I'd just offered him a steaming plate of dog shit, and replies, "How do you know he's coming back? Are you psychic?"

No, asshole. You told me he was.

He ended up turning me down & said I had to stay where I was. Awesome. Club 12 is also in a very high traffic area which is noisy & it just plain sucks.

I am hoping that when this guy does come back that Kelley will then allow me to move. No telling. As much as I hated B-South, I probably had the best unit team there (counselor & care manager) that I've ever had.

In the meantime I'm adjusting to the new unit OK. It's been 3 1/2 weeks so far. It's easier moving to a different unit on the same compound (which is rare), than transferring, 'cause at least I know people here already.

Well, it's been a week since I wrote last, and I am again still thankfully alone as Natalia sings "Do You Wanna Funk" on C3PO. Yes, Natalia, I really do.

Briefly, I got the website that my lockdown article is on. Again, it's nothing you haven't heard before, but I'd be very grateful if y'all would go there & give me some good feedback so they'll want me to continue. It is: HTTPS://SENTENCING.NET/PRISON-CONDITIONS/KELLY-JONES-DESCRIBES-THE-STATE-OF-QUARANTINE-IN-U-S-FEDERAL-PRISONS

I sent in another article last week, a "Prison Profile" about sentencing disparities. I hope they like it and I plan to sand in more.

They did some more moves out of my old unit last week. They moved several guys I was friendly with from B-South to D-South. I found this out because they brought the guys there this unit to get on the elevator with their carts full of their property.

Also, word is that this coming Tues. they are supposed to be moving a lot of the "workers" (i.e. - kitchen, commissary, etc.) from this unit to D-North, and that DN will be a "worker" unit. That was originally the main unit I wanted to move to 'cause it has the most "hotties" (sue me), so hopefully some of my crushes will be moving down here.

I asked the counselor last week if I could move again (cell 80 is now empty) & he said he'd think about it. I'm hoping that with all the moves on Tues. he'll give in & let me.

On more quarantine news...it appears that the unit I mentioned in a previous post where they cleared out the top tier for quarantine cells (F-North), has now been completely cleared out & all the guys in that unit were moved elsewhere. I believe it's all quarantine now.

I've seen on the news that experts are saying that people are better off outdoors at thi time, so keeping us locked in the unit all the time & only giving us one hour outside per week is counterproductive (not surprising).

There are a lot of guys applying for "compassionate release" during this time due to the pandemic & they have been pointing out that they're keeping us locked in here with a closed ventilation system which isn't healthy. I'm skeptical that the virus can travel thru the vents that far, but it's true that we haven't gotten much fresh air in four months.

I am not one of those people trying for compassionate release. I have nowhere to go, unlike many of these guys. It's pretty pathetic when you're better off in prison than homeless and living on the streets.

Another bad part of this lockdown is the fact that we've been having the some box meals for dinner for four months now. So, we've been eating peanut butter and lunchmeat for dinner for all this times. It is really getting old.

One other thing that the senior staff have come up with is that they've reimposed our twice daily "census counts" during the week (Mon.-Fri) where we're told to go back to out cells & the CO walks around & checks us off on his list that we're in the unit.

Duh. Where else would we be? We can't go anywhere!

I could semi-understand why they would do this when we're on normal operations, but on a lockdown? Any movements are very tightly controlled right now. Unless you work in Food Service or Commissary, or if perhaps someone from Medical walks you over for an appointment, no one goes anywhere.

Our regular 5-day CO doesn't even bother doing the census 'cause he knows it's pointless - he already knows who's not here. (Thank God he has some common sense. But whenever he's off they still do it. It really is pointless. This warden we've got is such a fucking asshole!

On a personal note, the most I've been able to go to the library to type has been for one hour twice a week. (One week it was only once). As that is my "hustle," it has seriously hurt me financially for these past months.

I will tell you that I have heard from someone here who has a friend at the "Low" in Seagonville, TX, that they have about 1200 case of COVID-19 there. That is definitely bad. Being a "Low," it is most likely all open dorm which would make it easy for a virus to spread.

Now, they do have a major issue there & should be on quarantine (or perhaps released home!). However, we have no cases here and there's no reason to keep us locked up like this. It's not healthy mentally or physically.

Thanks for writing! I worked on the transcription for your post.
(scanned reply – view as blog post)
uploaded Sept. 26, 2020.  Original (PDF) 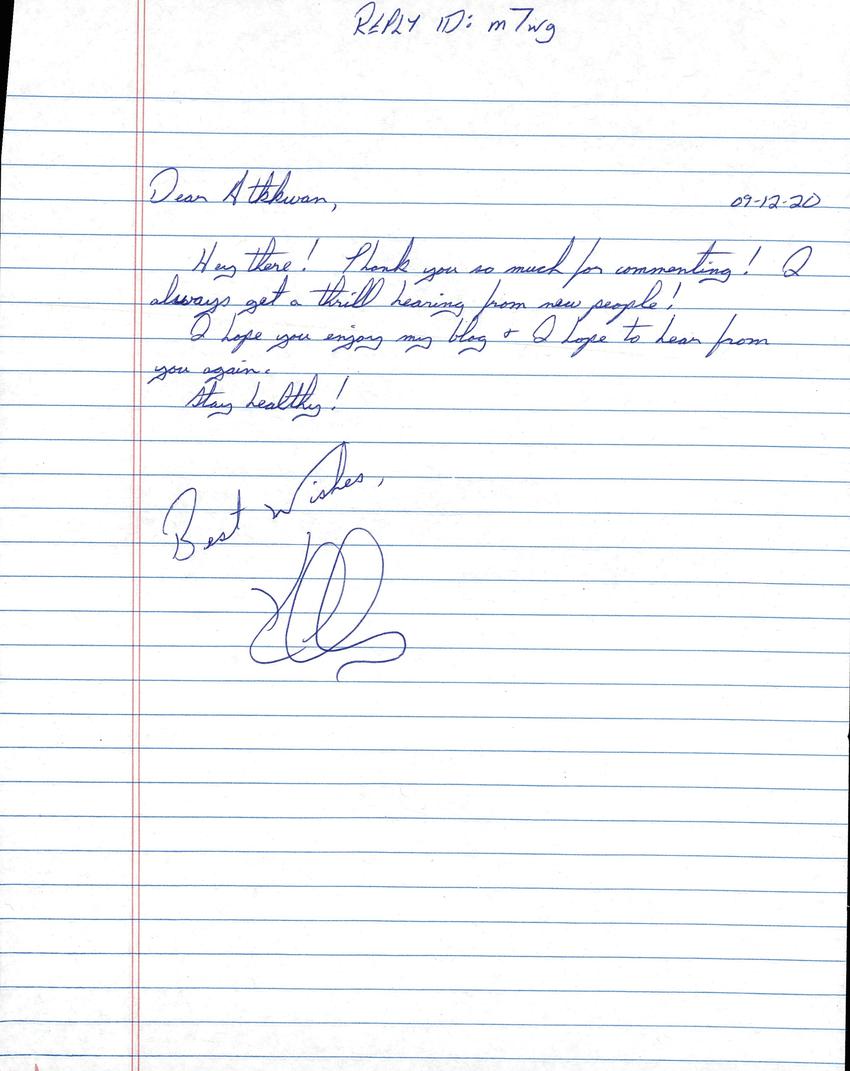