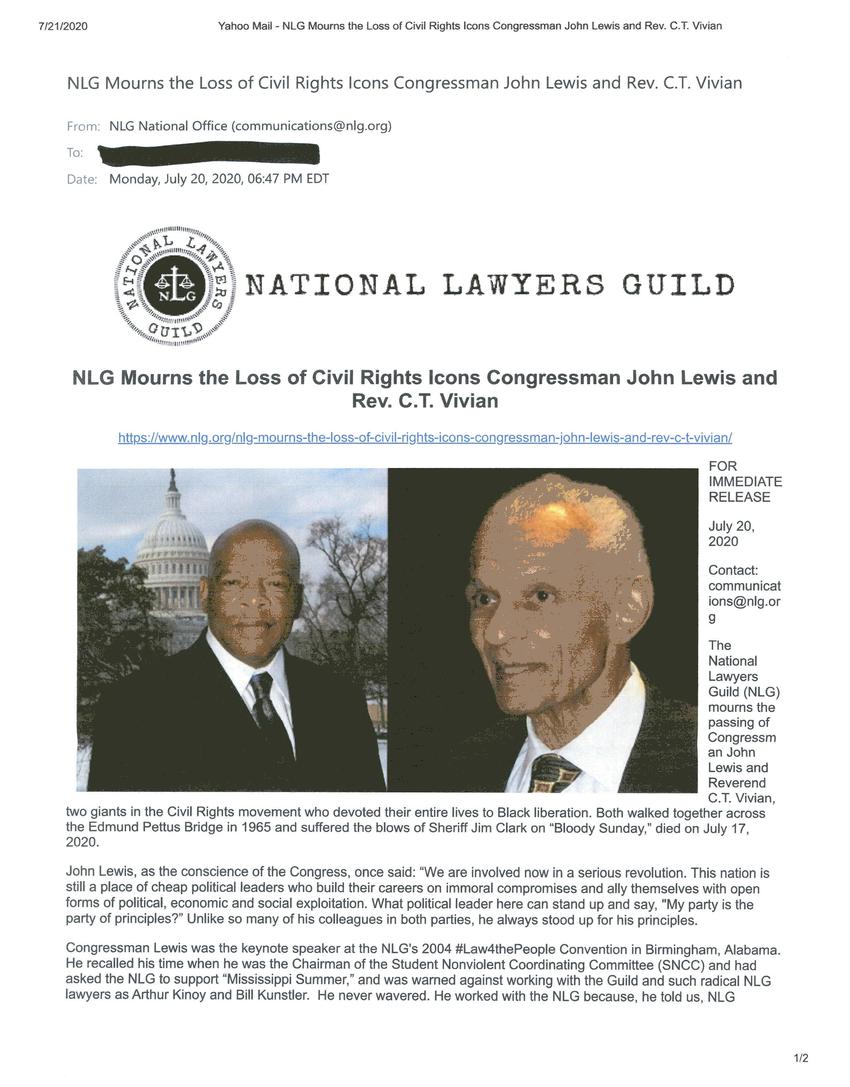 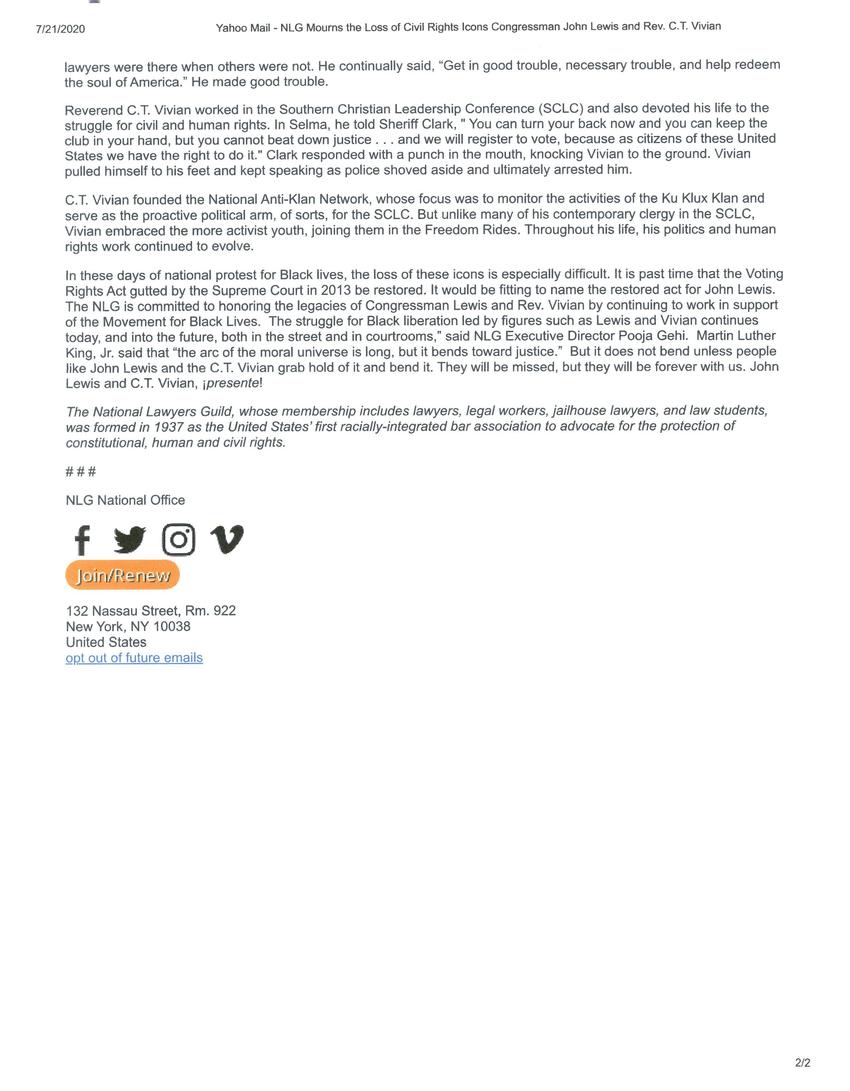 The National Lawyers Guild (NLG) mourns the passing of Congressman John Lewis and Reverend C.T. Vivian, two giants in the Civil Rights movement who devoted their entire lives to Black liberation. Both walked together across the Edmund Pettus Bridge in 1965 and suffered the blows of Sherrif Jim Clark on "Bloody Sunday," died on July 17, 2020.

John Lewis, as the conscience of the Congress, once said: "We are involved now in a serious revolution. This nation is still a place of cheap political leaders who build their careers on immoral compromises and ally themselves with open forms of political, economic and social exploitation. What political leader here can stand up and say, "My party is the party of principles?" Unlike so many of his colleagues in both parties, he always stood up for his principles.

Congressman Lewis was the keynote speaker at the NLG's 2004 #Law4thePeople Convention in Birmingham, Alabama. He recalled his time when he was the Chairman of the Student Nonviolent Coordination Committee (SNCC) and had asked the NLG to support "Mississippi Summer," and was warned against working with the Guild and such radical NLG lawyers as Arthur Kinoy and Bill Kunstler. He never wavered. He worked with NLG because, he told us, NLG lawyers were there when others were not. He continually said, "Get in good trouble, necessary trouble, and help redeem the soul of America." He made good trouble.

Reverend C.T. Vivian worked in the Southern Christian Leadership Conference (SCLC) and also devoted his life to the struggle for civil and human rights. In Selma, he told Sheriff Clark, "You can turn your back now and you can keep the club in your hand, but you cannot beat down justice... and we will register to vote, because as citizens of these United States we have the right to do it." Clark responded with a punch in the mouth, knocking Vivian to the ground. Vivian pulled himself to his feet and kept speaking as police shoved aside and ultimately arrested him.

C.T. Vivian founded the National Anti-Klan Network, whose focus was to monitor the activities of the Ku Klux Klan and serve as the proactive political arm, of sorts, for the SCLC. But unlike many of his contemporary clergy in the SCLC, Vivian embraced the more activist youth, joining them in the Freedom Rides. Throughout his life, his politics and human rights work continued to evolve.

In these days of national protest for Black lives, the loss of these icons is especially difficult. It is past time that the Voting Rights Act gutted by the Supreme Court in 2013 be restored. It would be fitting to name the restored Act for John Lewis. The NLG is committed to honoring the legacies of Congressman Lewis and Rev. Vivian by continuing to work in support today, and into the future, both in the street and in courtrooms," said NLG Executive Director Pooja Gehi. Martin Luther King, Jr. said that "the arc of the moral universe is long, but it bends towards justice." But it does not bend unless people like John Lewis and the C.T. Vivian grab hold of it and bend it. They will be missed, but they will be forever with us. John Lewis and C.T. Vivian, ¡presente!

The National Lawyers Guild, whose membership includes lawyers, legal workers, jailhouse lawyers, and law students, was formed in 1937 as the United States' first racially-integrated bar asscoiation to advocate for the protection of constitutional, human and civil rights.