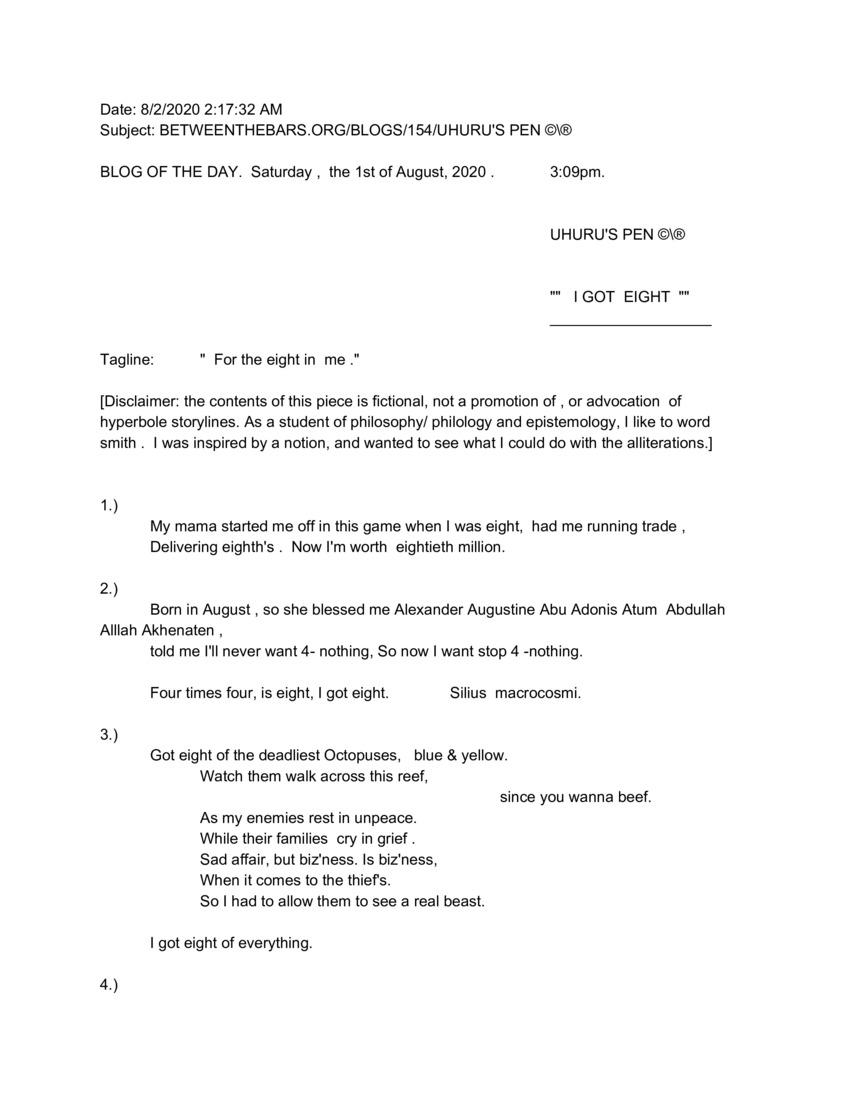 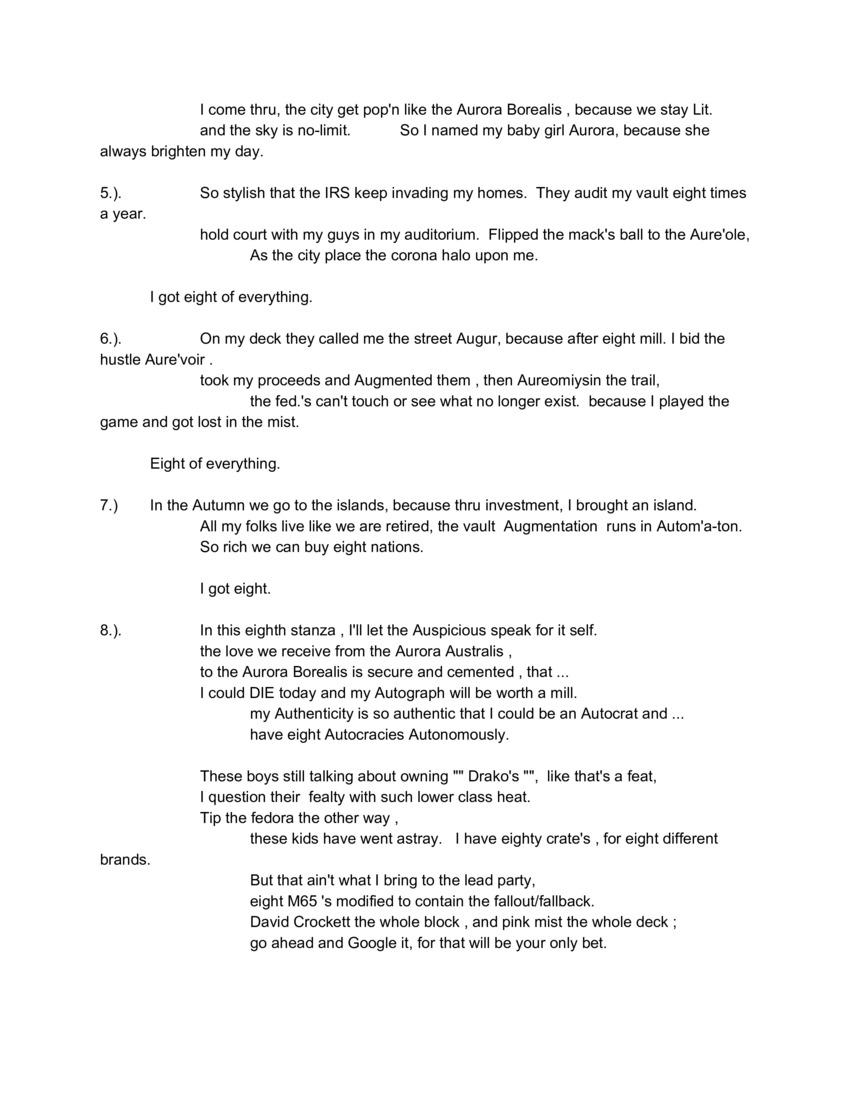 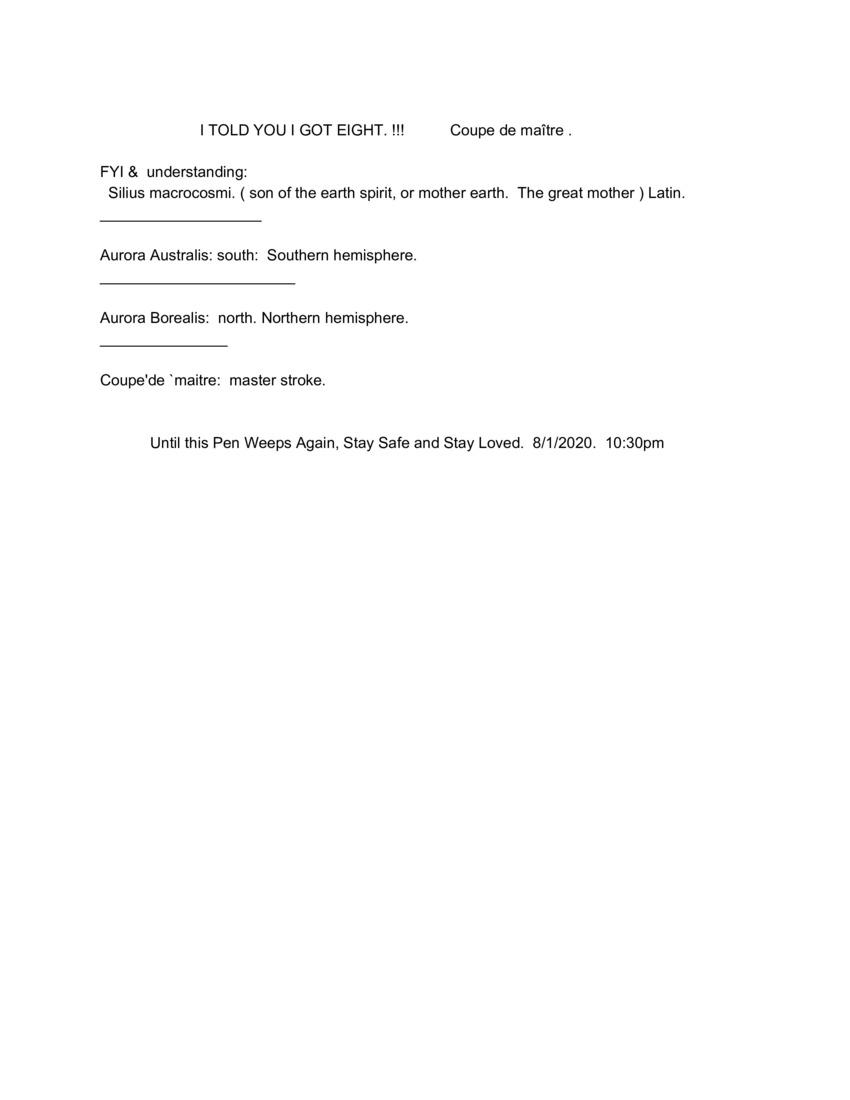 [Disclaimer: the contents of this piece is fictional, not a promotion of , or advocation of
hyperbole storylines. As a student of philosophy/ philology and epistemology, I like to word
smith . I was inpired by a notion, and wanted to see what I could do with the alliterations.]

1.)
My mama started me off in this game when I was eight, had me running trade ,
Delivering eighth's . Now I'm worth eightieth million.

2.)
Born in August , so she blessed me Alexander Augustine Abu Adonis Atum Abdullah
Alllah Akhenaten ,
told me I'll never want 4- nothing, So now I want stop 4 -nothing.

Four times four, is eight, I got eight. Silius macrocosmi.

3.)
Got eight of the deadliest Octopuses, blue & yellow.
Watch them walk across this reef,
since you wanna beef.
As my enemies rest in unpeace.
While their families cry in grief .
Sad affair, but biz'ness. Is biz'ness,
When it comes to the thief's.
So I had to allow them to see a real beast.

I got eight of everything.

4.)
I come thru, the city get pop'n like the Aurora Borealis , because we stay Lit.
and the sky is no-limit. So I named my baby girl Aurora, because she
always brighten my day.

5.). So stylish that the IRS keep invading my homes. They audit my vault eight times
a year.
hold court with my guys in my auditorium. Flipped the mack's ball to the Aure'ole,
As the city place the corona halo upon me.

I got eight of everything.

6.). On my dck they called me the street Augur, because after eight mill. I bid the
hustle Aure'voir .
took my proceeds and Augmented them , then Aureomiysin the trail,
the fed.'s can't touch or see what no longer exist. because I played the
game and got lost in the mist.

7.) In the Autumn we go to the islands, because thru investment, I brought an island.
All my folks live like we are retired, the vault Augmentation runs in Autom'a-ton.
So rich we can buy eight nations.

8.). In this eighth stanza , I'll let the Auspicious speak for it self.
the love we receive from the Aurora Australis ,
to the Aurora Borealis is secure and cemented , that ...
I could DIE today and my Autograph will be worth a mill.
my Authenticity is so authentic that I could be an Autocrat and ...
have eight Autocracies Autonomously.

These boys still talking about owning "" Drako's "", like that's a feat,
I question their fealty with such lower class heat.
Tip the fedora the other way ,
these kids have went astray. I have eighty crate's , for eight different
brands.
But that ain't what I bring to the lead party,
eight M65's modified to contain the fallout/fallback.
David Crockett the whole block , and pink mist the whole deck ;
go ahead and Google it, for that will be your only bet.