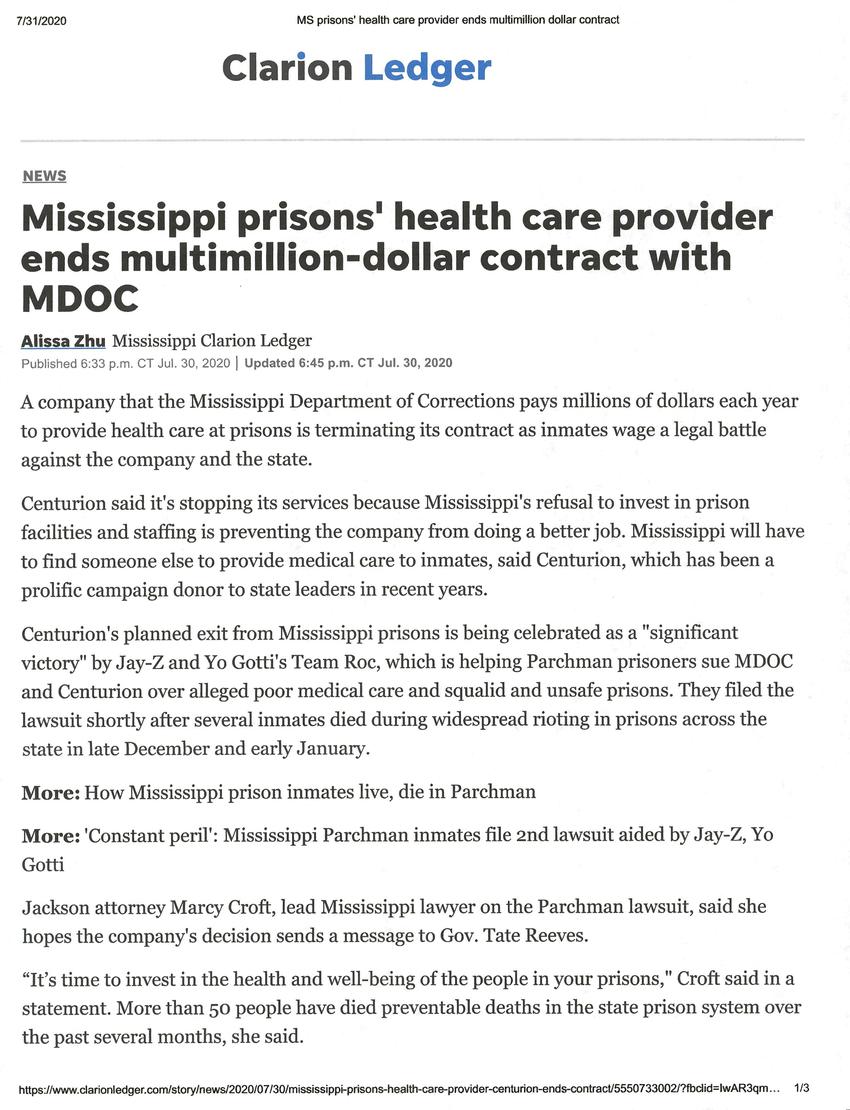 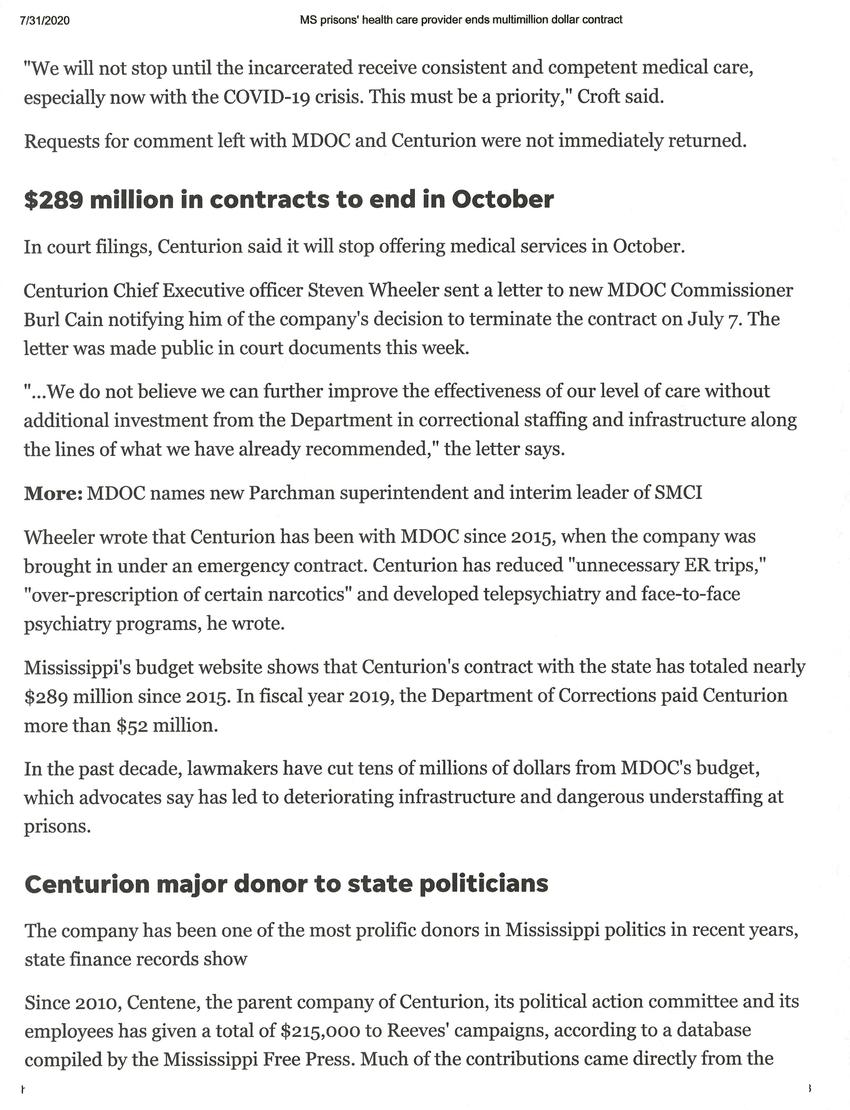 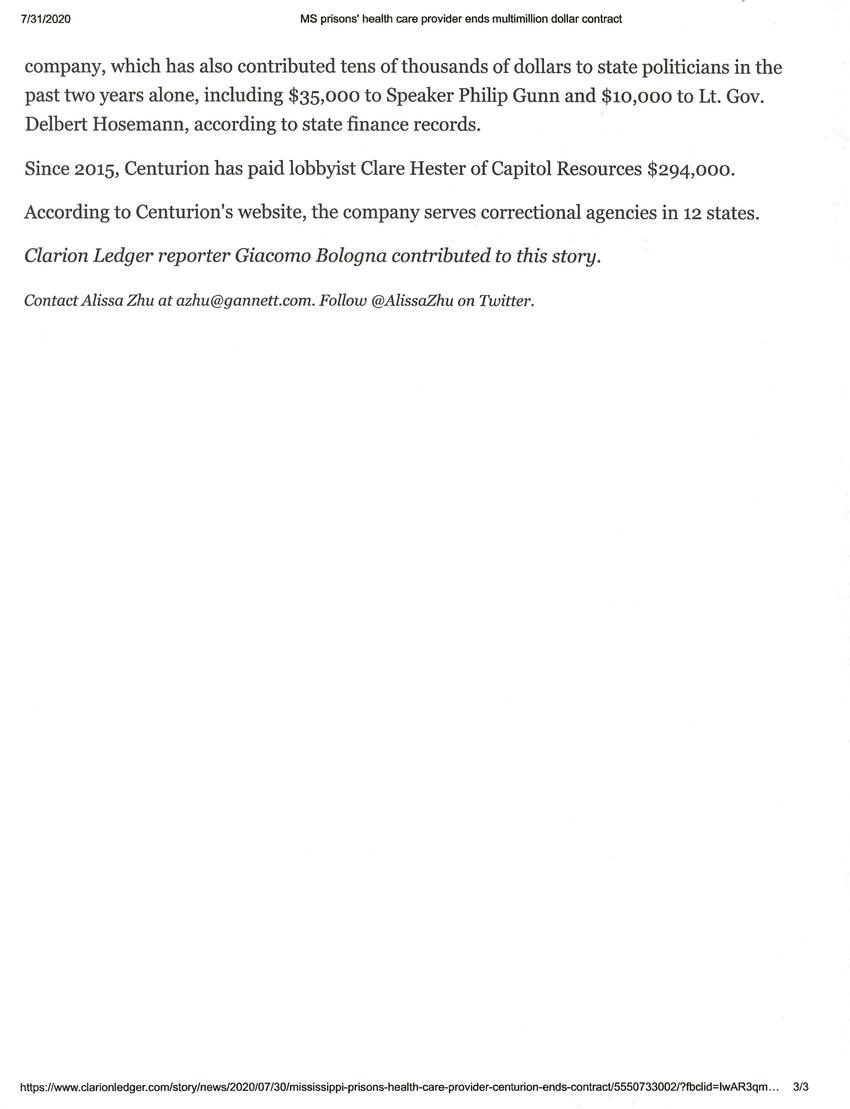 A company that the Mississippi Department of Corrections pays millions of dollars each year to provide health care at prisons is terminating its contract as inmates wage a legal battle against the company and the state.

Centurion said it's stopping its services because Mississippi's refusal to invest in prison facilities and staffing is preventing the company from doing a better job. Mississippi will have to find someone else to provide medical care to inmates, said Centurion, which has been a prolific campaign donor to state leaders in recent years.

Centurion's planned exit from Mississippi prisons is being celebrated as a "significant victory" by Jay-Z and Yo Gotti's Team Roc, which is helping Parchman prisoners sue MDOC and Centurion over alleged poor medical care and squalid and unsafe prisons. They filed the lawsuit shortly after several inmates died during widespread rioting in prisons across the state in late December and early January.

“It’s time to invest in the health and well-being of the people in your prisons," Croft said in a statement. More than 50 people have died preventable deaths in the state prison system over the past several months, she said.

"We will not stop until the incarcerated receive consistent and competent medical care, especially now with the COVID-19 crisis. This must be a priority," Croft said.

Requests for comment left with MDOC and Centurion were not immediately returned.
This photo, dated from Feb. 11-12, 2020, shows a bed in the medical unit at the Mississippi State Penitentiary at Parchman.
Special to the Clarion Ledger
$289 million in contracts to end in October

In court filings, Centurion said it will stop offering medical services in October.

Centurion Chief Executive officer Steven Wheeler sent a letter to new MDOC Commissioner Burl Cain notifying him of the company's decision to terminate the contract on July 7. The letter was made public in court documents this week.

"...We do not believe we can further improve the effectiveness of our level of care without additional investment from the Department in correctional staffing and infrastructure along the lines of what we have already recommended," the letter says.

Wheeler wrote that Centurion has been with MDOC since 2015, when the company was brought in under an emergency contract. Centurion has reduced "unnecessary ER trips," "over-prescription of certain narcotics" and developed telepsychiatry and face-to-face psychiatry programs, he wrote.

Mississippi's budget website shows that Centurion's contracts with the state has totaled nearly $289 million since 2015. In fiscal year 2019, the Department of Corrections paid Centurion more than $52 million.

In the past decade, lawmakers have cut tens of millions of dollars from MDOC's budget, which advocates say has led to deteriorating infrastructure and dangerous understaffing at prisons.
Centurion major donor to state politicians

The company has been one of the most prolific donors in Mississippi politics in recent years, state finance records show

Since 2010, Centene, the parent company of Centurion, its political action committee and its employees has given a total of $215,000 to Reeves' campaigns, according to a database compiled by the Mississippi Free Press. Much of the contributions came directly from the company, which has also contributed tens of thousands of dollars to state politicians in the past two years alone, including $35,000 to Speaker Philip Gunn and $10,000 to Lt. Gov. Delbert Hosemann, according to state finance records.

According to Centurion's website, the company serves correctional agencies in 12 states.