Real Talk - The View of a Connecticut Prisoner Vol. 4 No. 3 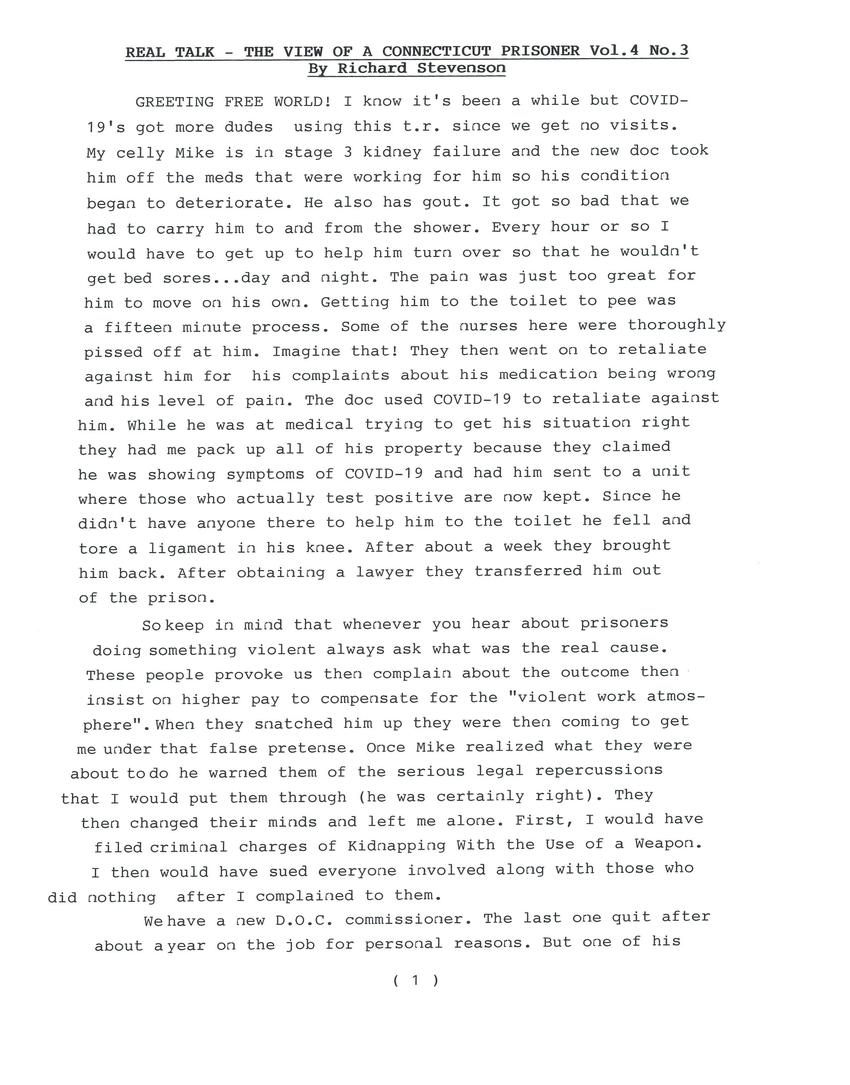 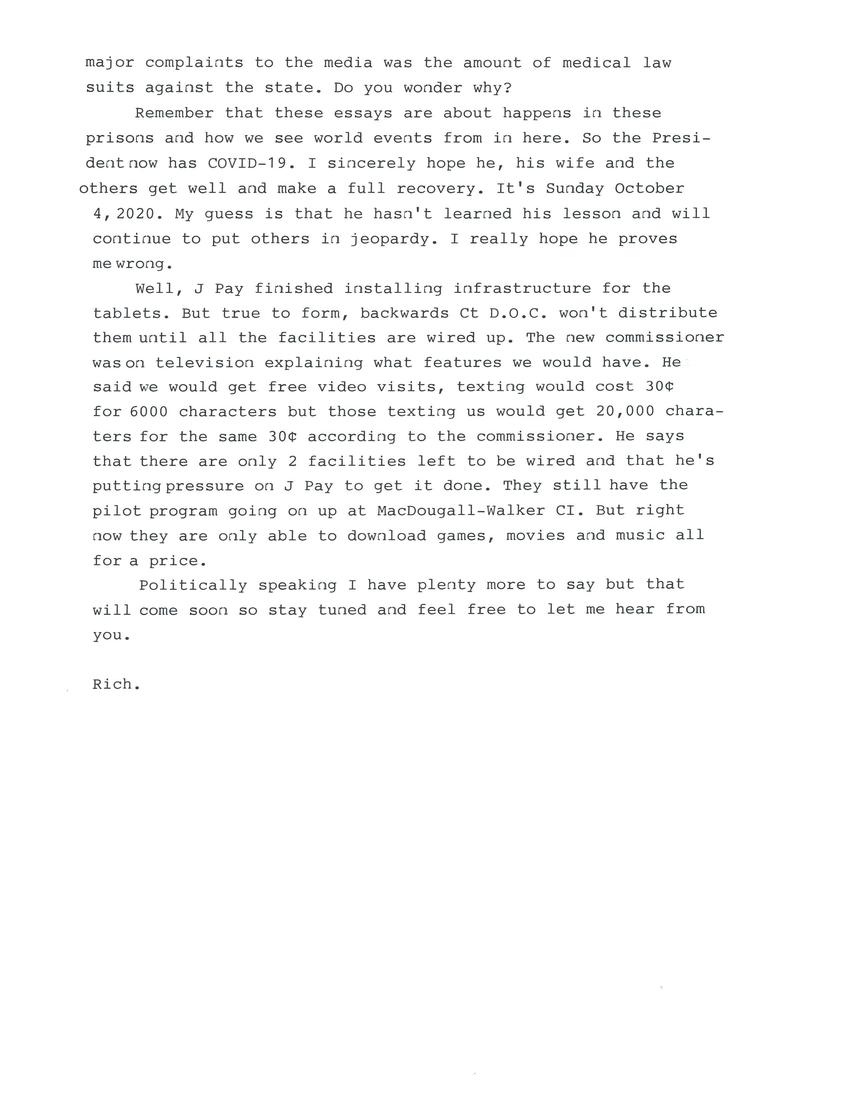 REAL TALK - THE VIEW OF A CONNECTICUT PRISONER Vol.4 No.3
By Richard Stevenson

GREETINGS FREE WORLD! I know it's been a while but COVID-
19's got more dudes using this t.r. since we get no visits.
My celly Mike is in stage 3 kidney failure and the new doc took
him off the meds that were working for him so his condition
began to deteriorate. He also has gout. It got so bad that we
had to carry him to and from the shower. Every hour or so I
would have to get up to help him turn over so that he wouldn't
get bed sores... day and night. The pain was just too great for
him to move on his own. Getting him to the toilet to pee was
a fifteen minute process. Some of the nurses here were thoroughly
pissed off at him. Imagine that! They then went on to retaliate
against him for his complaints about his medication being wrong
and his level of pain. The doc used COVID-19 to retaliate against
him. While he was at medical trying to get his situation right
they had me pack up all of his property because they claimed
he was showing symptoms of COVID-19 and had him sent to a unit
where those who actually test positive are now kept. Since he
didn't have anyone there to help him to the toilet he fell and
tore a ligament in his know. After about a week they brought
him back. After obtaining a lawyer they transferred him out
of the prison.
So keep in mind that whenever you hear about prisoners
doing something violent always ask what was the real cause.
These people provoke us then complain about the outcome then
insist on higher pay to compensate for the "violent work atmos-
there". When they snatched him up they were then coming to get
me under that false pretense. Once Mike realized what they were
about to do he warned them of the serious legal repercussions
that I would put them through (he was certainly right). They
then changed their minds and left me alone. First, I would have
filed criminal charges of Kidnapping With the Use of a Weapon.
I then would have sued everyone involved along with those who
did nothing after I complained to them.
We have a new D.O.C. commissioner. The last one quit after
about a year on the job for personal reasons. But one of his
major complaints to the media was the amount of medical law
suits against the state. Do you wonder why?
Remember that these essays are about happens in these
prisons and how we see world events from in here. So the Presi-
dent now has COVID-19. I sincerely hope he, his wife and the
others get well and make a full recovery. It's Sunday October
4, 2020. My guess is that he hasn't learned his lesson and will
continue to put others in jeopardy. I really hope he proves
me wrong.
Well, J Pay finished installing infrastructure for the
tablets. But true to form, backwards Ct D.O.C. won't distribute
then until all the facilities are wired up. The new commissioner
was on television explaining what features we would have. He
said we would get free video visits, texting would cost 30c
for 6000 characters but those texting us would get 20,000 chara-
ters for the same 30c according to the commissioner. He says
that there are only 2 facilities left to be wired and that he's
putting pressure on J Pay to get it done. They still have the
pilot program going on up at MacDougall-Walker CI. But right
now they are only able to download games, movies and music all
for a price.
Politically speaking I have plenty more to say but that
will come soon so stay tuned and feel free to let me hear from
you.